Houston Texans quarterback Deshaun Watson, who is facing allegations of civil or sexual assault from 19 women, was accused this week of deleting Instagram messages that could be used as evidence, and contacting his alleged victims in an attempt to settle.

In recent weeks, 19 women — all service workers in the health and wellness industry — have said they were assaulted by Watson, 25, after he hired them for massages during separate incidents in 2020 and 2021, according to lawsuits filed in Harris County, Texas. Many of the women claimed Watson originally contacted them on Instagram to schedule his massage.

One of the three lawsuits filed earlier this week alleges that Watson “is deleting Instagram messages, and contacting those who formally provided him massages, in an attempt to settle.” The lawsuit did not provide any additional information about that claim.

Watson’s attorney told CBS News on Monday that while Watson “regularly deletes” past Instagram messages, “he has not deleted any messages since March 15th, the day before the first lawsuit was filed.” The attorney also “categorically” denied that Watson has directly contacted his accusers to settle the cases. 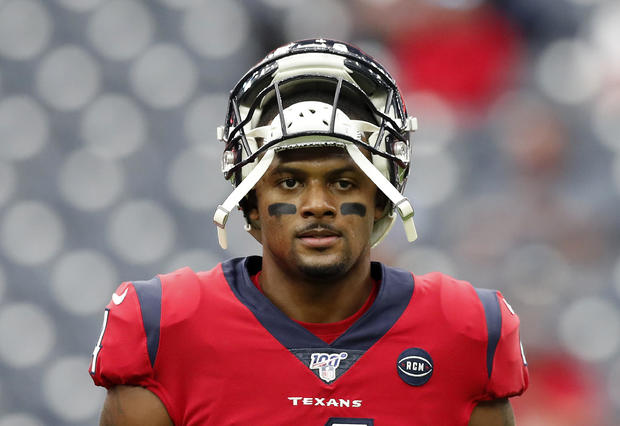 The other 17 women are suing Watson for civil assault, and are alleging similar experiences of Watson exposing himself, aggressively directing them to touch inappropriate areas of his body, and in some cases, touching them with his genitals. In one of the lawsuits, a woman accused Watson of being a “serial predator.”

In one of the lawsuits filed this week, a woman claimed she told another NFL player about her experience with Watson. The player, who has not been identified, allegedly told her that “there is a thin line between physical therapy and sexual pleasure,” and said that “Watson crossed that line over into sexual pleasure,” according to a summary of the conversation included in the lawsuit.

In a statement to CBS News on Monday, Watson’s attorney, Rusty Hardin, condemned the “false allegations in this avalanche of anonymous lawsuits,” and said his team will address the allegations more fully in a response to the court “in the coming weeks.” The attorney previously called the first seven allegations “meritless,” and said last week he believes that “any allegation that Deshaun forced a woman to commit a sexual act is completely false.”

Hardin has also specifically challenged the December 2020 sexual assault claim. Last week, he provided a statement from Watson’s marketing manager, who claims the plaintiff in that case admitted that she had a consensual encounter with Watson, but asked for $30,000 for her “indefinite silence.” The manager said he did not provide the money.

After news of the first lawsuit broke, Watson tweeted that he’s “never treated any woman with anything other than the utmost respect.”

“The plaintiff’s lawyer claims that this isn’t about money, but before filing suit he made a baseless six-figure settlement demand, which I quickly rejected,” Watson said in a March 16 statement. “Unlike him, this isn’t about money for me — it’s about clearing my name, and I look forward to doing that.” He has not released any additional statement on his personal accounts.

The attorney representing all 19 of the women, Tony Buzbee, issued a statement Tuesday defending his clients’ decision not to file formal criminal complaints with the Houston Police Department in addition to their civil suits.

Buzbee said he was initially worried about working with the Houston Police Department because he called for the resignation of former Police Chief Art Acevedo when he was running for Houston Mayor. But after Acevedo left the role, Buzbee said, he learned that Watson’s attorney’s son is part of the “exclusive Command Staff” of the department.

“I am not saying in any way that Deshaun Watson’s lawyer, Mr. Hardin, has a son who has a position that would compromise HPD and its investigation. I support his service, along with all Houston police officers—I think the rank and file know that,” Buzbee said. “But, I am saying that me and my clients will go elsewhere to provide our evidence to investigative authorities. Stand by.”

The NFL is investigating the allegations. The Texans said the team will stay in “close contact” with the league and will “continue to take this and all matters involving anyone within the Houston Texans organization seriously.”