Nepal plans to move Everest base camp due to global warming

Nepal plans to move a base camp at the foot of Everest further down the mountain because global warming and human activity is making the current one unstable.

Experts say the Khumbu glacier, a 10-mile ‘river of ice’ on which the campsite is located, is rapidly melting and thinning, which makes it unsafe for visitors.

Thinning of the glacier is due to melting ice, which is partly due to footfall, kerosene cookers and urine – people urinate around 4,000 litres at the base camp every day. 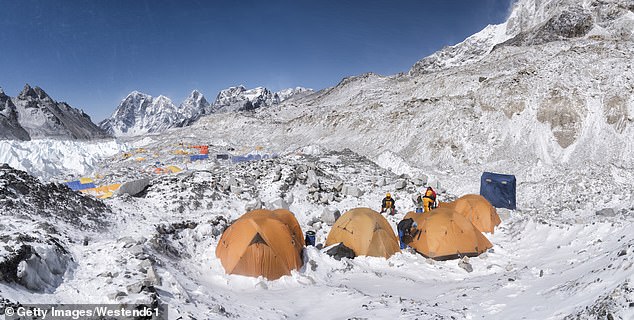 Nepal plans to move a base camp at the foot of Everest further down the mountain because global warming and human activity is making the current one unstable. Thinning of the Khumbu glacier is due to melting ice, which is partly due to footfall and human urine 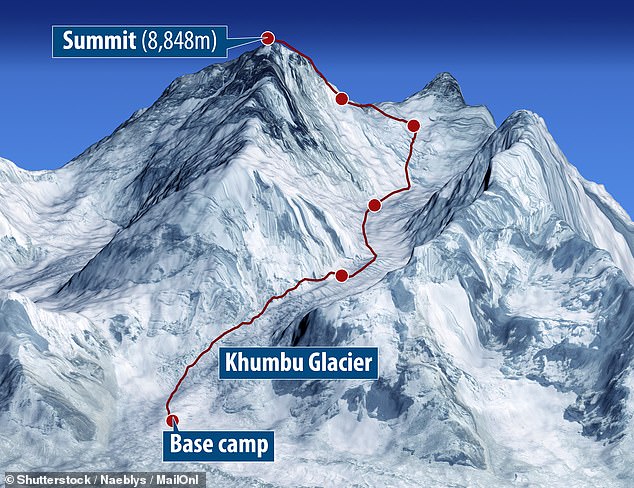 Khumbu Glacier is the world’s highest glacier, located in the Khumbu region of northeastern Nepal between Mount Everest and the Lhotse-Nuptse ridge.

It’s described as a 10 mile river of ice that begins high on the Lhotse Face around 25,000 feet.

Experts the Khumbu glacier is rapidly melting and thinning, which makes it unsafe for visitors.

The decision follows the recommendations of a committee formed by Nepal’s government to monitor mountaineering around Everest, which is the highest mountain on Earth, at 29,000 feet.

The relocation will likely take place in 2024, according to authorities.

‘We are now preparing for the relocation and we will soon begin consultation with all stakeholders,’ Taranath Adhikari, director general of Nepal’s tourism department, told the BBC.

‘It is basically about adapting to the changes we are seeing at the base camp and it has become essential for the sustainability of the mountaineering business itself.’

Most of Khumbu glacier is covered by rocky debris, but there are also areas of exposed ice that are melting, destabilising the glacier.

At the current location, crevasses are increasingly appearing on the ice while mountain climbers sleep, which could lead to fatal accidents.

‘We see increased rock falls and movement of meltwater on the surface of the glaciers that can be hazardous,’ Dr Scott Watson, a researcher at the University of Leeds, told the BBC.

A stream right in the middle of the base camp has also been steadily expanding, according to Nepalese authorities.

The presence of so many people at base camp, and their resulting footfall and having to go to the toilet, is another cause of melting ice.

‘We found that people urinate around 4,000 litres at the base camp every day,’ said Nepalese mountaineer Khimlal Gautam.

‘The massive amount of fuels like kerosene and gas we burn there for cooking and warming will definitely have impacts on the glacier’s ice.’

The Himalayan region covers the countries of Bhutan, China, India, Nepal and Pakistan, and is known for having the highest mountain in the world, Mount Everest.

The region has the largest concentration of ice on Earth, apart from the polar caps, and provides around 86,000,000 cubic metres of water annually, according to the WWF.

Dubbed the ‘water towers of Asia’, the frozen Hindu Kush and Himalayan ranges also include the second-highest mountain in the world, K2, at 28,251 feet.

HIMALAYAN GLACIERS ARE MELTING AT AN ‘EXCEPTIONAL RATE’ – AND COULD THREATEN THE SUPPLY OF WATER TO MILLIONS OF PEOPLE IN ASIA, STUDY WARNS

Himalayan glaciers are melting at an ‘exceptional rate’ and could threaten the supply of water for hundreds of millions of people in Asia, a study warns.

Researchers found that Himalayan glaciers have lost ice 10 times more quickly over the last few decades – predominantly since the year 2000 – than on average since the Little Ice Age hundreds of years ago.

The Little Ice Age was a period of major mountain-glacier expansion that spanned from around the early 14th century through to the mid-19th century, when rivers froze over and crops were decimated.

Himalayan glaciers are also now shrinking far more rapidly than glaciers in other parts of the world, which is raising sea levels, the study also found.

This accelerating melting has implications for hundreds of millions of residents who depend on Asia’s major rivers for food and energy – including the Brahmaputra, Ganges and Indus.