‘This is all of us in 2020’: Mum is left in hysterics after her robot vacuum cleaner tangles itself in toilet paper and ‘texts’ her for help from the bathroom

A photo of a robotic vacuum cleaner tangled in reams of toilet paper has been branded the perfect depiction of life during COVID-19.

Tayla Heness was baffled when her $799 ‘Deebot’ seemingly vanished into thin air, until a notification on the mobile app synced to the device said it was ‘in trouble’ and asked her to ‘please clean up’.

After much searching, the Sydney mother discovered the vacuum shrouded in toilet roll in the corner of her bathroom.

Photos of the entanglement have gone viral since they were shared Sunday, with many hailing it the ‘post of the year’ that brilliantly encapsulates the mood of the nation five months into the coronavirus crisis. 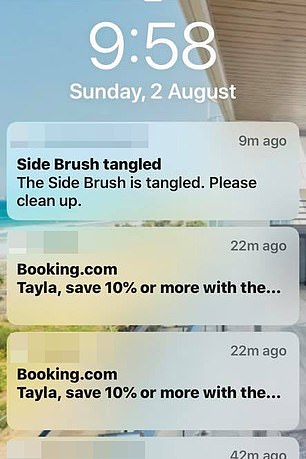 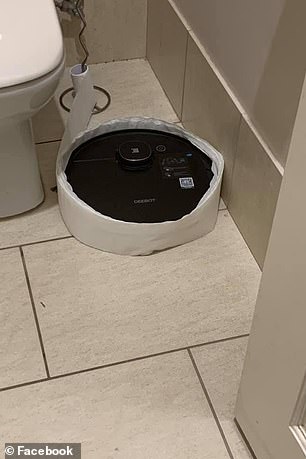 Sydney mother Tayla Heness searched for her ‘Deebot’ after receiving a notification (left) asking her to clean up; she found the device tangled in toilet paper (right) in her bathroom

‘No! Not the toilet paper. That’s more valuable than the robot at the moment,’ one woman said, referencing the renewed panic buying sweeping Melbourne and surrounding districts as residents brace for stage four ‘state of disaster’ shutdown.

Another had the same idea, saying: ‘Maybe it knew people were hoarding toilet paper and wanted to get in on that.’

‘Oh my God thanks for making me laugh! I wasn’t having a good night,’ said a third.

‘This is so good. We have a Deebot and he often gets himself into predicaments, but this takes the cake,’ a fourth added.

Others called it the funniest thing they had seen in a while.

And it’s not the first household disaster to capture the mood of the nation this year.

Last week, Australians branded a photo of a mother’s enormous laundry pile the most relatable post on social media.

Instead, the mum from Perth, Western Australia, threw freshly washed laundry into a pile in her living room which steadily grew into a gargantuan mound she christened ‘Mount Fold More’.

‘Have you ever looked at your laundry pile and considered throwing it away? Asking for a friend,’ she posted on Facebook alongside a photo of her lying on top of the mound.

Hundreds praised Ms Quinlivan for showing the reality of motherhood and home management instead of the carefully curated images typically seen online. 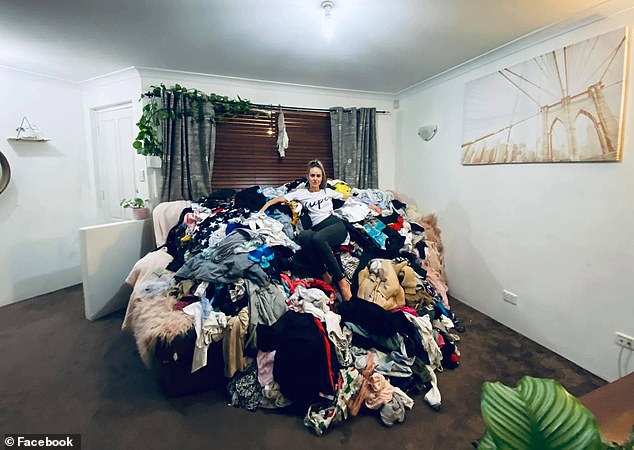 ‘More of this should be shown, we aren’t all super woman. Reality is nice to see,’ one woman said.

A second said she is currently dismantling her own ‘Mount Fold More’ and was glad to see she wasn’t the only one who had let laundry stack up.

‘Whoever says they’ve never had a Mount Fold More is a liar,’ said a third.

Another said she showed her fiance the photo to prove she is not ‘the only woman on the planet allergic to folding’.

‘That’s some serious washing, thank you for sharing – it does make me feel a bit better about mine!’ she added.