Mother-of-one who was SLAMMED after posting a snap of the huge pile of Christmas presents she’s bought for her daughter, seven, admits the youngster is ‘spoilt’ but isn’t a ‘brat’

A mother has been criticised after sharing her Christmas present haul for her daughter, which is worth £600.

Kayleigh Moran, 26, from North Wales, shared the large pile of gifts she had neatly wrapped for her daughter Daisy, seven, on a Facebook group dedicated to Christmas haul and bargains.

However, the mother-of-one was slammed by some people who thought the large stack, which included more than 40 presents, was too much for just one child,’ Manchester Evening News reported.

However, the mother hit back at critics, saying her beauty-pageant runner daughter was not a ‘brat’ and had raised a lot of money for charity. 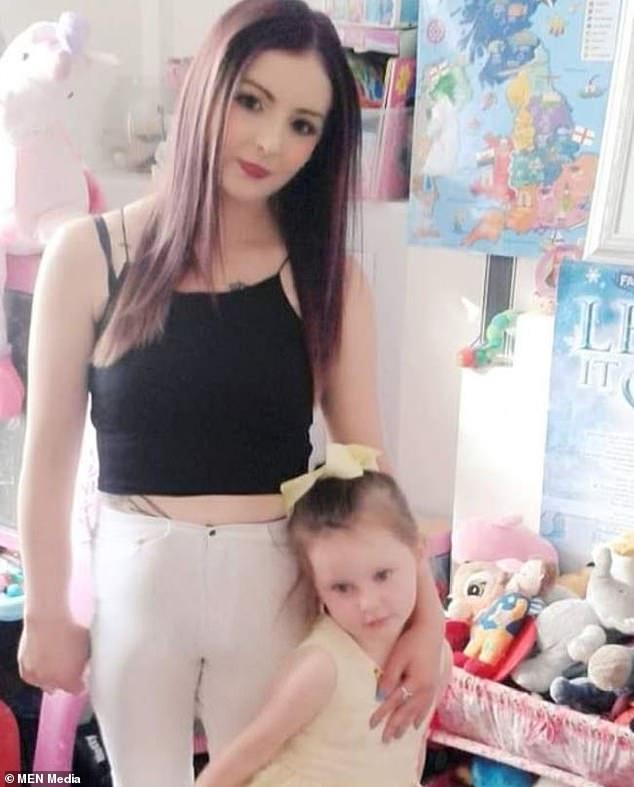 Kayleigh Moran, 26, from North Wales, shared the pile of gifts she had neatly wrapped for her daughter Daisy, seven, on a Facebook group dedicated to Christmas haul and bargains. She was criticised by several parents who thought the pile, which cost Kayleigh £600, was too much for just one child (pictured, Kayleigh and Daisy) 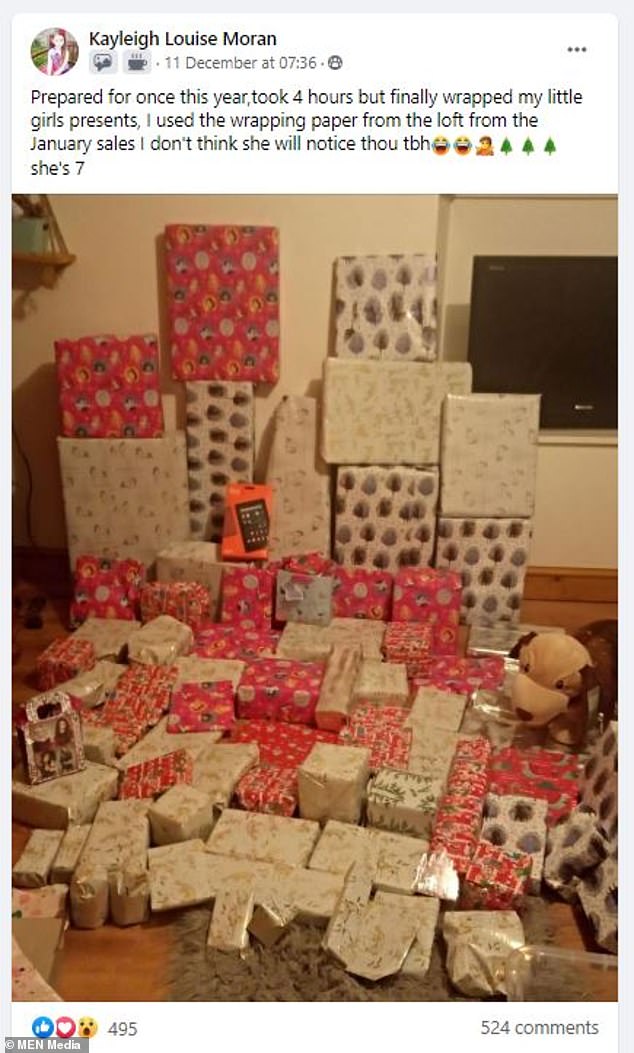 Kayleigh shared a picture of the 40+ gift pile on Facebook, where she was slammed for giving her child too many gifts. She has now hit back, saying Daisy often fundraised for charity

The mother initially posted a snap of the gifts on Facebook, alongside a caption which read: ‘Prepared for once this year, took 4 hours but finally wrapped my little girls presents, I used the wrapping paper from the loft from the January sales I don’t think she will notice thou tbh she’s 7.’

The impressive pile included several large and small presents, which featured a keyboard, a bluetooth speaker, karaoke machine, selfie light and some LOL doll toys, as well as a Little Mix makeup set.

It was too many gifts for some parents who criticised Kayleigh for spoiling her young child.

‘What has annoyed me is that even though she is spoilt, she is a beauty pageant finalist and she does a lot of charity work,’ Kayleigh responded. 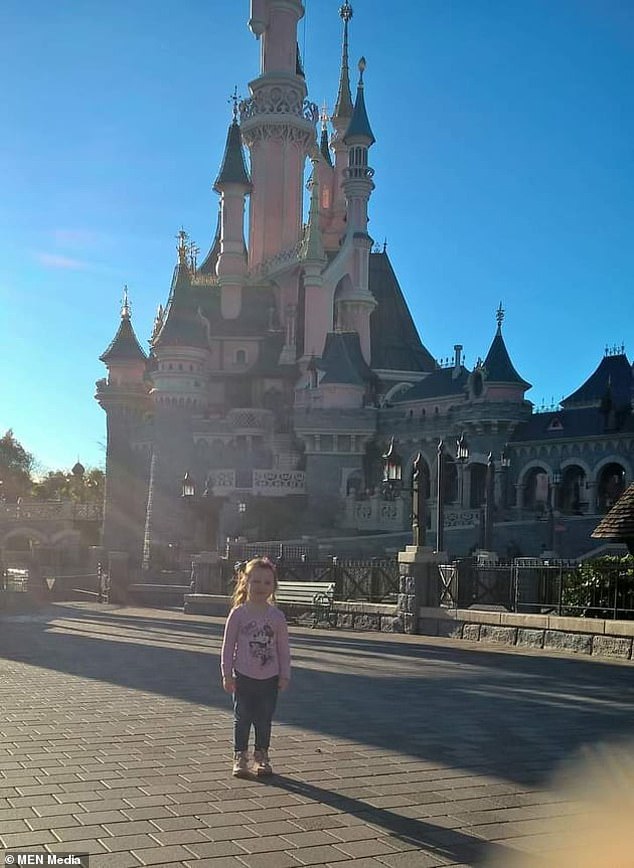 The mother-of-one admitted she spoiled her child, but said Daisy was no brat. Pictured: Daisy last year during a trip in Disneyland Paris where Kayleigh spent £700 in gifts

‘Throughout the year she’s raised over a thousand pounds for a children’s cancer charity, as well as various collections for our local zoo, cat sanctuary and Women’s Aid.’

While she admitted to ‘spoiling’ her child, spending as much as £700 on presents on some occasions, including a trip to Disneyland last year, the mother-of-one said that beauty pageant contestant Daisy was not a ‘brat’ and did a lot of volunteer work and work for the community.

‘She’s a clever girl as well as good hearted and I don’t see why she shouldn’t be spoilt if she’s a good kid,’ she added. ‘She does well in school, has lots of friends, she wants to be a paleontologist when she is older, she’s had a bank account from birth for university.’

She went on to say that Daisy, who is a pageant girl for Natural Beauty Walest, also sorted through her old toys to donate them to charity, and took part in collection efforts for shelters and charities.

Daisy, who had her own room filled with antiques and gold jewellery, has grown up ‘spoilt rotten,’ by her grandmother, Kayleigh admitted, before explaining the seven-year-old is an only grandchild, as well as an only child.

The mother-of-one has been working hard since having Daisy – studying social sciences and humanities at college as well as owning her own small business and waitressing, before Covid-19. 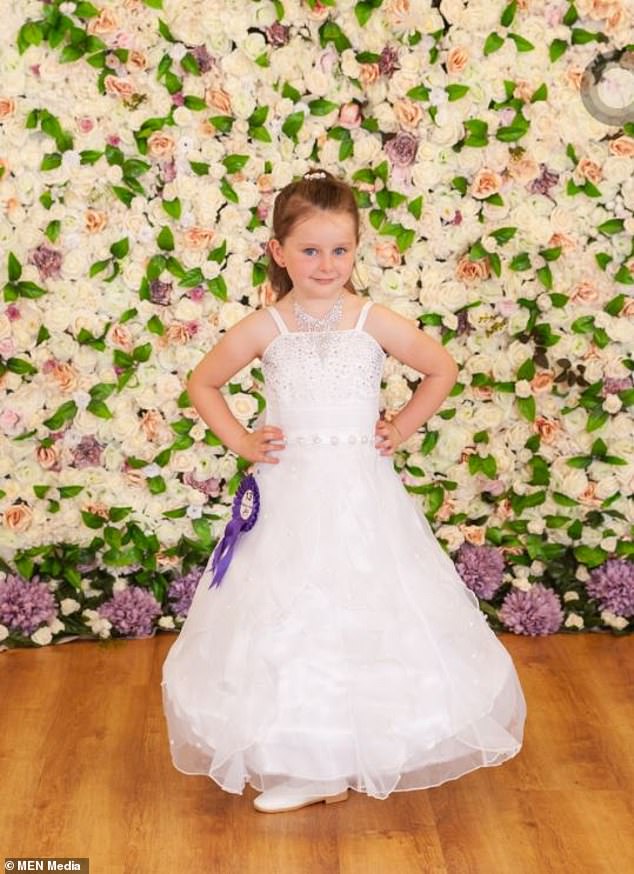 Daisy, who has been doing pageant for Natural Beauty Wales for a year and a half, often donates her old toys to charity and has taken part in collection, her mother said

Kayleigh said she wore Primark clothes from years ago, while Daisy went to the hairdresser several times, had her nails done at a salon, and wore designer workout clothes and picks from Moonsoon.

While the pair’s Christmas holiday at Disney Land – complete with a private tour of the venue and a lunch with the Disney Princesses – was cancelled this year due to the coronavirus pandemic, the mother-of-one hopes to take Daisy to Tenerife or Disney World in Florida, next year.

On top of these expensive gifts and trips, Kayleigh also funds Daisy’s pageant run, with the tot having attended weekly dance classes since she was one and taking part in competitions which end up costing her mother thousands.

But the supportive mother-of-one, who said Daisy had been taking part in pageant for a year and a half, added that even though pageants were an expensive hobby, she ‘stopped counting’ after forking out the first £2,000.

Preparing for a pageant is a dear process, and Kayleigh  said she bought dresses on eBay and spent hours adding diamantes onto the fabric to make sure Daisy shined onstage, with dresses costa hundred each, with three per pageant.

She explained that Daisy had gained a lot of confident thanks to partaking in the competition.

Related posts:
Birmingham axe Man City match due to waterlogged pitch while Chelsea & West Ham scrap games after coronavirus cases rise
Hollyoaks star Richard Blackwood’s mother dies in his arms following her third cancer battle
Popular News
Capitol rioter threatened to shoot his children if they told FBI about DC trip, authorities say
18/01/2021
Man Utd wonderkid Ramon Calliste, called ‘the next Giggs’, now owns luxury watch business and makes £5m a year – The Sun
26/03/2020
Megan Thee Stallion Addresses Criticism Over Twerking: ‘I Love to Shake My A**’
26/03/2020
Police guard shops to stop coronavirus panic-buyers and enforce social distancing – The Sun
26/03/2020
Coronavirus: Good Morning Britain’s Dr Hilary reveals ‘game-changing’ self-testing kit
26/03/2020
Recent Posts
This website uses cookies to improve your user experience and to provide you with advertisements that are relevant to your interests. By continuing to browse the site you are agreeing to our use of cookies.Ok