‘Mum came to the rescue’: Mother sees off home invaders who stabbed son

A mother has come to the rescue of her adult son during a violent overnight home invasion in Melbourne's south-east after two men kicked their way in while the family slept.

Footage from a security camera shows two men forcing their way into the home in Carrum before rushing down the hallway. 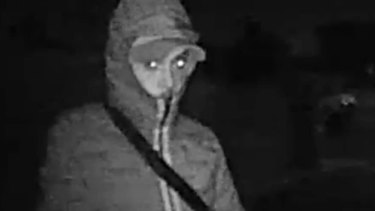 CCTV still of one of the suspects.Credit:

“I was just protecting myself the best I could but once mum woke up and realised what was going on, and saw the two guys on top of me, she started attacking them.

“Mum came to the rescue.”

Mr Angelidis, who is now nursing a variety of cuts and bruises, said the startled burglars then ran down the street and took off in a car.

He later realised one of the men had stabbed him with what appeared to be a screwdriver.

“It was pretty crazy. They were really trying to hurt me,” he said.

“Hopefully they can catch whoever did this.

"You’re not ever safe in your own house anymore."

During a press conference on Tuesday, Deputy Commissioner Shane Patton said while the state was experiencing a “significant drop” in general crime during the COVID-19 pandemic, high-impact crimes such as home invasions and carjackings were still occurring.

A police spokeswoman said detectives from the Moorabbin Crime Investigation Unit were investigating the incident at Carrum.

Any who witnessed suspicious activity in the area or with information is urged to contact Crime Stoppers on 1800 333 000 or visit crimestoppersvic.com.au.

Related posts:
Hospitals must provide medical workers N95 masks daily under Cuomo edict
Private island off Florida buys thousands of coronavirus tests
Popular News
Yara Shahidi Reacted To Her Casting As Tinker Bell In Disney’s Live-Action ‘Peter Pan’ Movie
26/09/2020
Man Utd wonderkid Ramon Calliste, called ‘the next Giggs’, now owns luxury watch business and makes £5m a year – The Sun
26/03/2020
Megan Thee Stallion Addresses Criticism Over Twerking: ‘I Love to Shake My A**’
26/03/2020
Police guard shops to stop coronavirus panic-buyers and enforce social distancing – The Sun
26/03/2020
Coronavirus: Good Morning Britain’s Dr Hilary reveals ‘game-changing’ self-testing kit
26/03/2020
Recent Posts
This website uses cookies to improve your user experience and to provide you with advertisements that are relevant to your interests. By continuing to browse the site you are agreeing to our use of cookies.Ok