In a wide-ranging address to the Business Council of Australia, Mr Morrison signalled a major policy push over the final six weeks of 2020 that would deal with pressure on the government to address major environmental issues while boosting economic growth in the wake of the coronavirus recession. 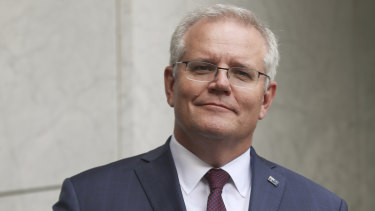 Prime Minister Scott Morrison has flagged major changes to industrial relations and emissions targets by the end of the year.Credit:Alex Ellinghausen

While Australia has avoided the economic damage being wrought across Europe and North America, this year it suffered its first recession in three decades and the deepest downturn since the early 1930s.

The government, facing a record $213.7 billion deficit this year and a $112 billion shortfall in 2021-22, wants to drive a business recovery that will drive down unemployment and arrest the sharp fall in wages growth that has plagued the country since 2012.

Mr Morrison said industrial relations reforms, based on the talks held between businesses and unions over recent months, would be a catalyst for the economy's recovery.

An omnibus bill of industrial relations changes will go to Parliament in the final sitting fortnight of the year, with the aim of of "shifting the needle" for workers and business to get more people back in employment while lifting productivity that in turn would boost wages.

Mr Morrison said workplace agreements had become bogged down in "overly prescriptive procedural requirements" that made them difficult to get formal approval.

He said protections such as the "better off overall test", which seeks to ensure no staff are worse off under a workplace agreement, will continue but signalled this would be modified.

"Our goal is to ensure it will be applied in a practical and sensible way, so that the approval process does not discourage bargaining, which is a problem under the current approach," he said on Thursday night.

The Prime Minister said the changes would not completely please employees or unions.

"Now I don’t expect our reforms will elicit delirious applause. There won’t be sweeping praise from the union movement and businesses won’t see their version of an industrial utopia either," he said.

"But it will be a genuine attempt at fixing problems in a way that provides shared benefits."

On the environment, Mr Morrison said he hoped to reveal new emission goals taking into account the government's most recent policies.

He said while the country could use its carryover credits to meet its Kyoto commitment, he hoped not to.

"My ambition is that we will not need them and we are working to this as our goal, consistent with our record of over-delivering. I am confident our policies will get this job done," he said.

Carryover credits come from over-achieving on greenhouse gas emissions reduction targets set down under the Kyoto agreement, which is set to expire this year.

Australia has committed to reduce its greenhouse gas emissions by at least 26 per cent, by 2030, based on 2005 levels. Under its current trajectory of emissions reduction Australia needs to draw on 411 megatonnes of carryover credits' to reach the 26 per cent target.

Last year Australia’s emissions fell less than one per cent, with a major new source of emissions emerging in liquefied natural gas exports from Queensland.

Carryover credits are an international liability for the Morrison government. Australia's former top climate diplomat, Howard Bamsey said earlier this month that "many other governments would think if it's not illegal to use carryover, they regard it as unreasonable".

Australia is the only country that has said it intends to use carryover credits for its Paris target and last December at the United Nations' climate summit a bloc of 32 countries including Germany, France, the UK, and New Zealand lobbied for a ban their use.

Since then, and following Joe Biden’s election win, Australia's five largest export markets, covering 70 per cent of trade, will have set net-zero emissions targets for 2050 or 2060 including the US, China, Japan, South Korea and the UK.

The Morrison government has said it can meet its Paris target by achieving net-zero emissions sometime in the second half of this century.

The BCA has called on federal government to set a net-zero 2050 target. Its climate policy states if Australia can meet its targets without carryover credits "then we should".

Council president Tim Reed said the country had to stage a business-led recovery out of the recession and that required adopting reforms that boosted productivity.

"At the BCA, we believe, the key question Australia faces is whether we can leverage this spirit of collaboration and re-found sense of national fairness to introduce reforms that will allow us to exit the current recession with higher productivity, leading to accelerated real-wage growth than we entered the pandemic; or whether we retreat to our pre-COVID position of stagnant real-wage growth and real GDP being driven almost entirely via population growth," he said.

Related posts:
Air Mail Teams Up With Stubbs and Wooten
I’m A Celebrity fans spot Beverley Callard cheating at veganism ‘She’s eating butter!’
Popular News
Number (N)ine FW20 Is Packed With Bold Prints and Textured Fabrics
30/11/2020
Man Utd wonderkid Ramon Calliste, called ‘the next Giggs’, now owns luxury watch business and makes £5m a year – The Sun
26/03/2020
Megan Thee Stallion Addresses Criticism Over Twerking: ‘I Love to Shake My A**’
26/03/2020
Police guard shops to stop coronavirus panic-buyers and enforce social distancing – The Sun
26/03/2020
Coronavirus: Good Morning Britain’s Dr Hilary reveals ‘game-changing’ self-testing kit
26/03/2020
Recent Posts
This website uses cookies to improve your user experience and to provide you with advertisements that are relevant to your interests. By continuing to browse the site you are agreeing to our use of cookies.Ok