Doctors have pleaded with the state government to install air quality monitors in the Yarra Valley to alert vulnerable residents to dangerous smoke pollution during the autumn burn-off season.

Supported by Yarra Ranges Council, which voted unanimously to back the push for better monitoring, the doctors say smoke pollution during the coronavirus pandemic is a dangerous health risk for their patients. 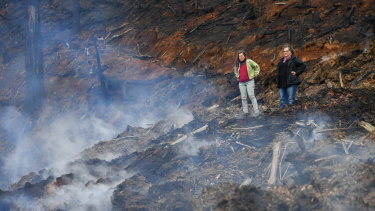 "There is growing fear and anxiety in the Yarra Valley about what the COVID-19 pandemic will mean … and we are now facing months of smoke haze when already there are shortages of medications including asthma inhalers," the doctors write in a letter to Minister for Environment and Climate Lily D'Ambrosio and the Environment Protection Agency.

We are now facing months of smoke haze when already there are shortages of medications.

"After this summer’s catastrophic fires and the documented effects of smoke exposure on the health of so many Australians, we are asking that air quality monitors be installed … and the data be made available to the public," add Dr Jennifer Conway, Dr Khoi Bui, Dr Kenneth Tate and Dr Alana Shaw, from the Get Well Clinic in Healesville.

Burns are planned for hundreds of hectares across Victoria, NSW and Tasmania in the coming weeks, but some regions have no air monitoring. 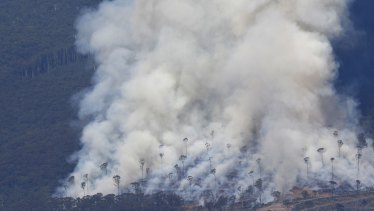 The Yarra Ranges area, which includes the towns of Healesville and Warburton, contains a number of areas slated for burns. These include planned burns – where forest is burnt with the aim of reducing fire risk – and post-logging burns, where logging coupes are burnt to remove the "slash" – branches, debris and bark – that remains.

With the nearest air quality monitor in Mooroolbark, 28 kilometres from Healesville, residents say they lack information about the level of smoke pollution.

When the crisp days of autumn arrive, biologist Marianne Worley says she feels a rising sense of dread. Ms Worley has asthma, which is well controlled most of the time. But every autumn she has to visit the doctor and chemist for a prescription of Symbicort, a corticosteroid inhaler.

She says this year, because of the coronavirus pandemic, the prospect of smoke pollution and trips outside the home is terrifying. Planned burns should be cancelled this year, the 45-year-old says.

"My lungs are rendered more vulnerable to a lung-attacking virus and I’m put in a higher risk category for COVID-19 than I should be for my age because of a government decision to burn the forests near my home," she says.

Ms D’Ambrosio said she understood heightened community concern about air quality and said residents would be given plenty of notice to stay indoors.

But on advice from the Chief Health Officer, the government would continue its planned burning activity because it helped reduce the risk of bushfires, she said.

Dr Conway, who has been a GP in the region for 30 years, said her patients with respiratory disease often left their homes during planned burns and went to a shopping mall in Lilydale, 20 kilometres away, to avoid the smoke. But this year that is not possible.

"We have no emergency department within an hour's drive, prolonged ambulance response times, and we’re in the middle of a lockdown where people can’t leave," Dr Conway said.

There is increasing evidence of the health implications of smoke pollution. Bushfire smoke from the catastrophic fires last summer was responsible for 417 excess deaths, and 1124 hospitalisations for cardiovascular problems and 2027 for respiratory problems across the ACT, NSW, Victoria and Queensland.

The doctors have not received a response to their letter from the EPA. In response to questions, the EPA told The Age that it was finalising a location in the Yarra Valley to deploy an incident air quality monitor.

In partnership with the Department of Environment and CSIRO it would deploy a regional air quality sensor network across Victoria in 2020/21, which would include locations in the Yarra Valley, it said.