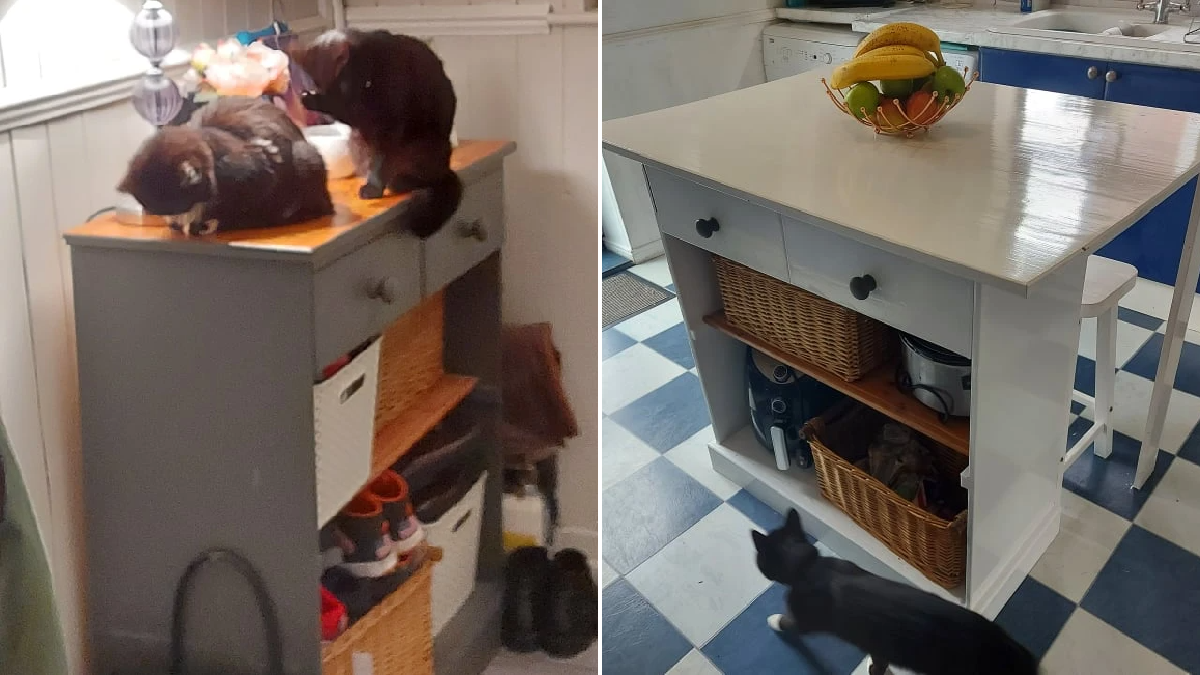 A big, fancy kitchen island is high on the list for many people’s dream homes.

Not only do they provide more workspace, for chopping and preparing food, but they are also incredibly sociable, and can turn your kitchen into the heart of your home.

But, splashing out on a new kitchen is expensive, and islands don’t come cheap.

However, one woman managed to kit out her kitchen with a brand new island – all without spending a penny.

Kym Brookes, 30, a mum-of-two from Staffordshire, decided to make her own new kitchen workspace using an old chest of drawers, rather than spending hundreds or even thousands on a brand new one.

‘I’ve always wanted a kitchen island but they are not in our budget at the minute,’ Kym told money-saving community LatestDeals.co.uk.

‘I had an old chest of drawers in the hallway that we stored shoes in. As I was starting a new position that required a working from home space, I thought I’d make use of the old drawers, as the only space I could put a desk in was in the hallway.’

Kym covered the drawers with white DC Fix that she already had from when she wrapped her kitchen cupboards. she used wood glue and screws to secure her table top to the top of the drawers, and added legs for extra support using the base from her dining table.

‘To build it, I cleaned all the surfaces ready for the DC Fix to be applied,’ she says. ‘Once I was happy with that, I applied wood glue to the top of the drawers, placed weights on top and let it dry overnight.

‘The next day, we used the base of our dining table to create the legs. I did have to saw a little off each as they were a little too long for the height of the island.

‘Once we got them to the right size, my partner drilled two holes through the table top in each corner so we could incorporate screws for added support.

‘I then proceeded to cover the table top and screws with the DC Fix I’d used on the drawers for a more seamless finish.

‘My family love it – I sent my mum some pictures after I had completed it and she is now on the lookout for a set of drawers so I can create the same in her kitchen.
‘It took two days to complete and it cost me nothing as I already had everything at home.’

Kym couldn’t be happier with her new island, and is especially pleased that it didn’t cost her a penny to build.

‘I love it now it’s finished and it makes my kitchen feel so much bigger. The island also brings the added bonus of extra worktop space for when I’m cooking for my family,’ she adds.

‘When I was looking at purchasing a ready made island, I looked at kitchen stores, eBay and so on, and they all ranged from £250-up for a new island.

‘So I was stoked that I had managed to create this for free as I had everything I needed.

‘Even if you don’t have spare drawers, have a look on Gumtree or Facebook Marketplace, as you may be able to get some for free or at a very low price.

‘I like to try and recycle as much as I can with furniture as we don’t have the biggest budget to do up the house.’

Kym bought the house three years ago and says furnishing it and doing it up has been a slow process.

‘I think if you can make something you already have better, then what’s the point in buying new?’ she says.

‘I’m quite a creative person, but don’t worry if you’re not – you can get all sorts of ideas from Pinterest or YouTube to help you with any DIY ideas you might have.

‘I received lots of support for my creation when I posted it on Facebook, which made me love it even more.’