Senior Andrews government ministers have admitted they had little or no knowledge of key decisions about the ill-fated hotel quarantine program until after they were made, and in some cases their departments did not brief them on key developments.

The head of the Health Department Kym Peake told the the inquiry into the program on Wednesday that she had not briefed her minister, Jenny Mikakos, on key safety concerns with the program, even after a suspected suicide and a delay in transferring a COVID-19 positive quarantine detainee who required intubation in intensive care. 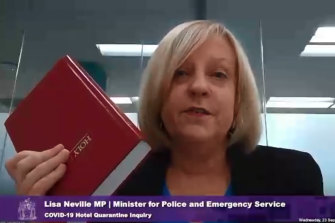 Lisa Neville taking an oath on the Bible before giving evidence at the hotel quarantine inquiry.

And Police Minister Lisa Neville gave evidence that she was “pretty cranky” after her bureaucrats failed to inform her about a proposal in June to replace security guards in the program with 850 Australian Defence Force troops. She said she had read the news on the front page of the newspaper.

Mr Pakula, whose department set up the quarantine program in its first few days, said he was not briefed that private security would be hired and was not consulted before the contracts with security companies were signed. He was only told that his department had been displaced by the Health Department as the agency in charge of the ill-fated program after the decision was made.

Ms Peake, whose Department of Health and Human Services’ was the control agency for the crisis, was subjected to several hours of sometimes hostile questioning on Wednesday afternoon. At her second appearance before the inquiry, the department secretary said she had not told Ms Mikakos about three reports that identified problems with the hotel quarantine program.

The first was an email by Public Health Commander Dr Finn Romanes, backed by Chief Health Officer Brett Sutton, showing concerns about “a risk to the health and safety of detainees" because of governance problems. Ms Peake did not brief her minister on the email because, “I was satisfied that the issues that had been raised had been addressed," she said.

Within days of that email, a suspected suicide occurred in hotel quarantine. 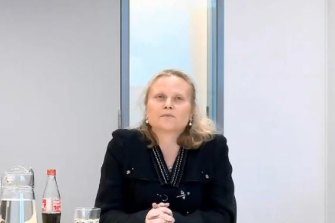 DHHS boss Kym Peake has been questioned for hours at the inquiry.

Ms Peake referred the case to healthcare quality peak body Safer Care Victoria, along with another involving a delay in transferring a sick hotel quarantine detainee who was later admitted to intensive care. Ms Peake said she did not tell her minister about the outcome of either of Safer Care’s reports because: “They had been addressed”.

The health department secretary later endured a period of hostile questioning from Arthur Moses QC, hired by security company Unified, who ended by saying: "Do you accept sitting here today there were deficiencies in the hotel quarantine program because your department did not discharge the functions that it had been provided for?”

Ms Peake denied that was the case.

Ms Mikakos will give evidence on Thursday, followed by a Friday afternoon appearance by Premier Daniel Andrews.

Earlier on Wednesday Ms Neville and Mr Pakula became the latest in a string of witnesses before the inquiry to give evidence that they did not know who had made key decisions, including the use of security guards or the Australian Defence Force in the program.

Ms Neville said she was told within hours of the National Cabinet decision on March 27 to detain all returning overseas travellers in hotels, and that private security guards were to be hired to guard the Melbourne quarantine hotels.

"I believe that private security was raised by Commissioner Crisp. I'm pretty confident the ADF issues were raised by Mr Ashton," Ms Neville said. A note made by Mr Ashton in the meeting refers to "ADF" as well as "Security guards, police back up".

Mr Crisp does not remember what was spoken about at that meeting, but told the inquiry last week he did not think it was him who first mentioned private security.

She recalls in that crucial meeting that neither she, Mr Crisp, nor Mr Ashton expressed any concern about the arrangement, saying in her statement that it was a standard model for guarding "Parliament House, hospitals and police headquarters … [and] major events such as the Australian Open".

Ms Neville also resisted the suggestion that the decision to hire the guards was responsible for what later went wrong. About 99 per cent of the coronavirus cases in Melbourne's devastating second wave emerged, via security guards, from the botched hotel quarantine system.

The Police Minister said she had not been aware in advance of the state government’s decision on June 24 to request 850 ADF personnel for the quarantine program. She only heard about the request, which was rescinded the following day amid widespread confusion, when checking the news headlines in the early hours of the morning.

She said finding out about an expanded ADF role from the media left her "pretty cranky".

Jobs Minister Martin Pakula, whose department signed the contracts with the private security contractors, told the inquiry that his knowledge of the operational activities of his officials on the quarantine program was very limited, and he did not know who had decided to hire the private guards. 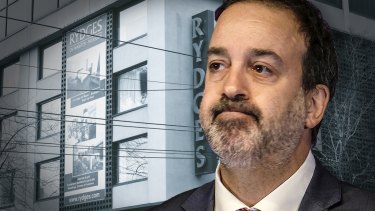 While Mr Pakula's department was initially in charge of the hotel quarantine program, control quickly shifted to the Department of Health and Human Services.

Mr Pakula said his department secretary, Simon Phemister, "was a bit put out" by the change but there was no other reason to be concerned.

"To this day I'm really not quite sure, but I would surmise there was some discussion amongst agency heads and it led to a change in the decision, but I don’t know that decision was made," Mr Pakula said.

He also told Wednesday’s hearing that he only became aware of concerns within his department with the hotel quarantine program after the inquiry was established.

Both Ms Neville and Mr Pakula said in their evidence that Ms Mikakos’ Department of Health and Human Services had operational control of the quarantine hotels where Victoria’s second wave of coronavirus infection, which has killed more than 700 people, originated.

The inquiry is due to report by November 23.

Related posts:
Alexei Navalny discharged from hospital after Novichok poisoning
Police marksman kills dog after he bites his owner, 35, to death
Popular News
Trump LAUGHS as media sprayed with water from giant hose and says ‘there goes the cameras’
29/10/2020
Man Utd wonderkid Ramon Calliste, called ‘the next Giggs’, now owns luxury watch business and makes £5m a year – The Sun
26/03/2020
Megan Thee Stallion Addresses Criticism Over Twerking: ‘I Love to Shake My A**’
26/03/2020
Police guard shops to stop coronavirus panic-buyers and enforce social distancing – The Sun
26/03/2020
Coronavirus: Good Morning Britain’s Dr Hilary reveals ‘game-changing’ self-testing kit
26/03/2020
Recent Posts
This website uses cookies to improve your user experience and to provide you with advertisements that are relevant to your interests. By continuing to browse the site you are agreeing to our use of cookies.Ok