Home » Millions of people are missing their second COVID-19 doses, and that has experts worried about herd immunity

Millions of people are missing their second COVID-19 doses, and that has experts worried about herd immunity

Over the weekend, data from the Centers for Disease Control and Prevention revealed millions of Americans who’ve had their first vaccine dose against the coronavirus are not receiving their second.

Some are choosing to forgo their second dose, either because they believe they’re sufficiently safe after receiving the first or because they fear possible adverse reactions from the second. Others, meanwhile, are unable to receive their second dose because of circumstances out of their control like limited vaccine supply.

In total, about 8% of people who received their first dose have so far missed their second, the CDC said.

Octavio Venegas told Insider his 89-year-old mother, Gladys, missed her second vaccine appointment because she was hospitalized after having a stroke and needing to treat an ulcer.

Venegas said his mother, an advanced Alzheimer’s patient, received her first Pfizer shot on March 1. She was scheduled to get her second one on March 22. A week after receiving her first dose, she ended up in the hospital with “a duodenal ulcer and she had to have two transfusions,” Venegas said.

Venegas said doctors did not specify whether his mother’s hospitalization was related to her vaccination dose. But her doctors were aware that she had received her first shot and had not suggested to Venegas that the Pfizer vaccine could have led to her hospitalization, he said. She had also been experiencing constipation issues for a while before her stay in the hospital, which suggests to Venegas it wasn’t the vaccine that caused the issues.

His mother stayed in the hospital for three weeks from March 8 to March 26, missing her second vaccine appointment. After she was discharged, she went home to receive hospice care, where she remains “completely bedridden” and uses a urine catheter, Venegas said. Nurses from the hospice provider bathe and care for her.

In the last few weeks, Venegas said he has been trying to get his mother the second dose. He called the pharmacy where she received her first shot to ask about rescheduling her second. He said he also called various vaccination sites and clinics in Florida, where they live.

He asked pharmacies and clinics about the possibility of administering an at-home second dose, since his mother cannot leave her bed and can no longer use a wheelchair to get around.

All the sites he contacted either told him they cannot administer vaccines outside their own facilities or said they cannot schedule individual doses, Venegas said. Providers, therefore, must schedule two doses for individuals receiving an appointment, he said he was told.

The Florida Department of Health did not respond to Insider’s request for comment asking about the process to reschedule second-dose vaccine appointments.

Venegas said he has been stressed about the process, worrying about his elderly mother potentially contracting the virus.

“Most likely I will have to let it go, and just in my mind rely on the fact that only one of the two vaccines provide some level of protection,” he said, which is “better than nothing.”

“[The] hospice sends nurses and also people to bathe my mom in bed, and I wonder if some of these frequent and daily visitors might have had contact with people with COVID,” Venegas added.

Since vaccines began rolling out in December, health officials have recommended people get two doses of either the Pfizer and Moderna vaccine to most efficiently protect against the coronavirus.

Pfizer’s doses are 21 days apart, while Moderna’s are 28. Those timelines, however, are just guidelines. The CDC says people can get the two doses up to six weeks, or 42 days, apart.

“Up to 42 days, there should be no change in efficacy,” said Dr. Elena Cyrus, an infectious disease epidemiologist working at the University of Central Florida. 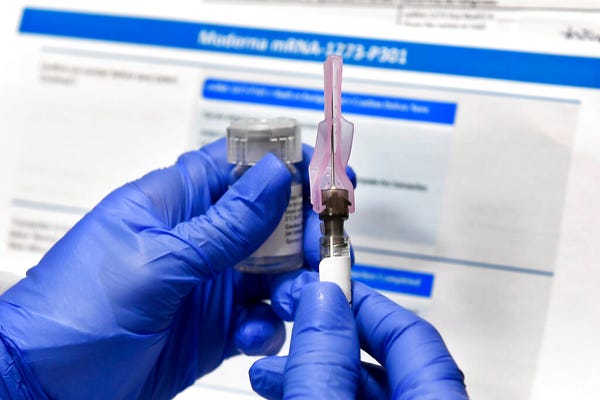 Others are opting out of the second dose on purpose

Jo Henrion, 72, says she had a cardiac arrest shortly after receiving the first dose and isn’t sure whether it was brought on by the Moderna vaccine.

She received her first Moderna dose on March 18. Six days later, she had a cardiac arrest and ended up in the hospital for 12 days, she said. Since then doctors and specialists have been running tests and collecting blood from her.

Her second-dose appointment was April 15, but she skipped it fearing it spurred her cardiac arrest.

“I wouldn’t risk another cardiac arrest for hardly anything,” Henrion told Insider. She said she’d “have to really be convinced that it wasn’t the shot” that caused it.

Doctors have not told her the cardiac arrest was caused by the vaccine, but Henrion says they also haven’t ruled it out yet. Specialists, however, have recommended she avoid getting the second dose until they find out what caused the cardiac arrest, Henrion said.

A home nurse tending to Henrion told her to contact Moderna to report the “adverse reaction” and ask about the cardiac arrest. Henrion then got on the phone with a Moderna representative, who promised to “report it to her higher-ups and that they then will report it to the CDC,” she said.

Henrion doesn’t believe her cardiac arrest was brought on by any pre-existing health conditions.

“I’m a very active 72-year-old,” she told Insider. “So for me to be down is difficult. I don’t do well laying in the bed and being not productive.”

“I’ve been a realtor for 33 years,” she added. “I get a lot of exercise in my work and I’ve been renovating a house for the last 12 months and a garden.”

Moderna did not respond to Insider’s request for comment.

Cyrus of the University of Central Florida stressed the importance of receiving both doses of either vaccine to reach the highest immunity level possible.

“Any individual that is not fully vaccinated or those who have not received both doses for the two-dose regimen potentially do not have the full protection the vaccine offers, increasing their risk of transmission and potentially also contributing to community spread,” Cyrus told Insider.

One study found the first dose is quite effective on its own. Both the Pfizer and Moderna vaccines are likely to be 80% effective after just one dose.

The first dose of either vaccine “trains the immune system” to recognize the virus. The second dose “boosts antibody levels to afford even better protection,” Dr. Francis Collins, director of the National Institutes of Health, wrote in February.

But despite the relatively high efficacy rate of just a single COVID vaccine, herd immunity is still potentially threatened by the 8% of individuals who have so far not received a second dose.

“If the 8% increases over time, the chances of achieving herd immunity reduces and makes the population more vulnerable to existing strains of the virus and other emerging variants or mutations,” Cyrus said.

Achieving herd immunity is becoming more and more important as the US moves toward reopening, operating in pre-pandemic ways, and relaxing mask and social distancing guidelines.

Others believe 8% is a relatively small number of people. Ashish Jha, a physician at the Brown University School of Public Health, stressed in a Tuesday teleconference that 92% of vaccinated people have received both doses.

Jha said it’s fine if people miss their second doses because they can reschedule them.

“People miss appointments because life happens,” he said. “And the messaging that needs to go out right now to people is: ‘Don’t worry about it. Go get your second shot.'”

Individuals might miss their second dose appointment for varying reasons.

The appointment time, for example, might not work for them three or four weeks after the initial dose. A lot of people don’t even know what their schedule is going to be like four weeks from today.

“I don’t think it’s people hesitating or not wanting to get it. It’s hard to get this stuff, two shots in a row,” Jha said. “And so we’ve got to be patient, and we’ve got to give people more opportunities to come back and complete their second shot.”

Both Jha and Cyrus suggested the people likeliest to miss their second dose vaccines are vulnerable or marginalized groups. Individuals from these groups might have less control over their schedules and live in areas with more access barriers and socio-cultural issues.

That’s why there should be more opportunities for individuals to reschedule their missed doses, experts say. As the US gets closer to achieving herd immunity, there will be less demand for vaccines, Cyrus said.

“There will be less emergency sites and vaccine administration will move from federal sites to more primary care and access to care in the US is not equitable for all communities,” she added.

Structural sociocultural issues like racism and poverty mean navigating health systems can be difficult for people of color and other marginalized groups.

Have a news tip? Reach this reporter at [email protected]