The Melbourne Vixens have secured their spot at the top of the Super Netball ladder after defeating Collingwood on Saturday, a win that heaped more misery on their cross-town rivals.

The Vixens prevailed over the Magpies, who are enduring a difficult season, 61 – 53.

Simone McKinnis' Vixens side are now 12 points clear of second-placed West Coast Fever with two games to play, after the Fever beat the NSW Swifts earlier in the day to leapfrog them into second. 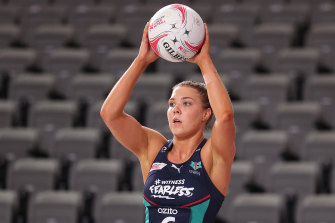 Melbourne’s Liz Watson missed the game through an ankle injury but centre Kate Moloney, pictured, managed to take up the slack. Credit:Getty Images

While Melbourne's clash with the Magpies pitted the top team against the bottom team it was Collingwood who begun the game on top.

They shot out to a 12-5 lead in the first term and weren't eclipsed by the Vixens until late in the first half.

The Vixens' comeback was built on better defence and more fluid attacking, however, two-point Super Shots were also important.

Caitlin Thwaites and Mwai Kumwenda hit a series of shots from the two-point zone to drag the Magpies' lead back.

Star Vixens player Liz Watson missed the game through an ankle injury but centre Kate Moloney managed to take up the slack left by her absence.

Jo Weston was as solid as ever in defence while Tegan Philip was also handy supporting Thwaites and Gumwenda.

Gabby Sinclair was the Magpies' best while Geva Mentor battled Thwaites and Kumwenda strongly in defence.

The Pies play their second last game of the season against Sunshine Coast Lightning on Wednesday and then their last against the Queensland Firebirds on Saturday. Unfortunately they cannot avoid finishing bottom, even if they win both.

The Vixens' run to the finals sees them play the Firebirds on Sunday and the Lightning the weekend after.

Moloney said after the match the versatility of the Vixens' starting line-up and bench was key to their success.

"That's the great thing at the moment, we brought 14 players and we are seeing our shooting circle, down our defensive end, whoever goes in their steps up and it seamless," she said. "I think we definitely need that in such a condensed season as well."

Mentor said the Magpies would take the positives away from how they tested the Vixens.

"They are top of the table for a reason and we were just really pleased to be able to get out of the box in the first quarter and hand it to them," she said. "For us it's about playing consistently for the four quarters and unfortunately we dropped off after the second half."

Related posts:
Bill Maher Says Trump and FDR Only Have 'Difficulty Walking' in Common
Today's free horse racing tips: Best bets for today's ITV racing at Doncaster and Leopardstown
Popular News
900-mile wide Storm Alex is to set to batter Britain with heavy rain
01/10/2020
Man Utd wonderkid Ramon Calliste, called ‘the next Giggs’, now owns luxury watch business and makes £5m a year – The Sun
26/03/2020
Megan Thee Stallion Addresses Criticism Over Twerking: ‘I Love to Shake My A**’
26/03/2020
Police guard shops to stop coronavirus panic-buyers and enforce social distancing – The Sun
26/03/2020
Coronavirus: Good Morning Britain’s Dr Hilary reveals ‘game-changing’ self-testing kit
26/03/2020
Recent Posts
This website uses cookies to improve your user experience and to provide you with advertisements that are relevant to your interests. By continuing to browse the site you are agreeing to our use of cookies.Ok