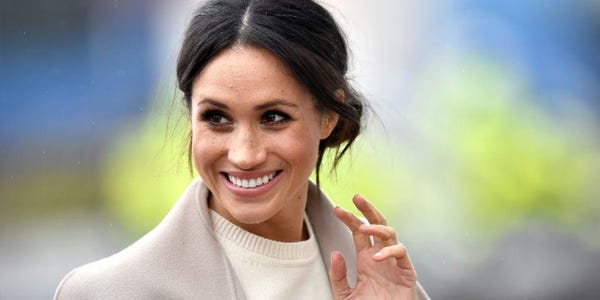 Meghan Markle offered a rare glimpse into her home in a recent video call she hosted for the charity Smart Set, which provides professional workwear for women in need.

Markle, who chatted with three women who received Smart Set clothing, filmed in the living room of her home in the Montecito neighborhood of Santa Barbara, California.

Behind her is a grand stone fireplace with a mantle, and a lush green plant. On the mantle sat a piece of black-and-white vintage artwork.

Though most of the artwork is cut off in the video frame, viewers can see the bottom portion, which reads "I love you, California," and shows the claws of a bear.

Harper's Bazaar reporter Amy Mackelden found it was a poster-sized print of old sheet music for the state's regional anthem.

The full print features a bear hugging the state of California.

Markle and her husband Prince Harry moved into their home in July after resigning from their positions as senior royals and heading to the US.

Their home is estimated to cost $14.65 million, the Los Angeles Times reported.

Related posts:
Kerry Washington's Best Red Carpet Looks Deserve an Award of Their Own
Eagles’ Zach Ertz, Howie Roseman had ‘heated discussion’ amid contract spat
Popular News
BLM activist in Indiana admits to being a race faker
19/09/2020
Man Utd wonderkid Ramon Calliste, called ‘the next Giggs’, now owns luxury watch business and makes £5m a year – The Sun
26/03/2020
Megan Thee Stallion Addresses Criticism Over Twerking: ‘I Love to Shake My A**’
26/03/2020
Police guard shops to stop coronavirus panic-buyers and enforce social distancing – The Sun
26/03/2020
Coronavirus: Good Morning Britain’s Dr Hilary reveals ‘game-changing’ self-testing kit
26/03/2020
Recent Posts
This website uses cookies to improve your user experience and to provide you with advertisements that are relevant to your interests. By continuing to browse the site you are agreeing to our use of cookies.Ok