Joe Biden might not be a billionaire like his opponent, but he sure is popular among members of the three-comma club.

The former vice president raked in donations from 131 billionaires, including those behind Netflix, Hyatt hotels, DreamWorks studios, LinkedIn, a Forbes analysis of federal campaign records and the magazine's own Billionaires List found.

Unlike President Trump's billionaire backers, several of Biden's donors gave only the $2,800 maximum allowed per donor to a campaign committee and did not pump extra funds into Super PACs or advertising. However, over the course of his 16-month campaign, Biden has had a greater number of billionaires or their spouses donate directly to his campaign than the president, who has only landed 99 billionaire donors despite fundraising for his reelection since 2017.

And now that Biden has announced Senator Kamala Harris as his running mate, the gap between the two candidates' support among the three-comma club only stands to grow: Harris attracted donations from more billionaires than anyone else during the presidential primaries before withdrawing from the race in December.

Keep reading to learn more about some of Biden's most notable billionaire backers, listed in no particular order. 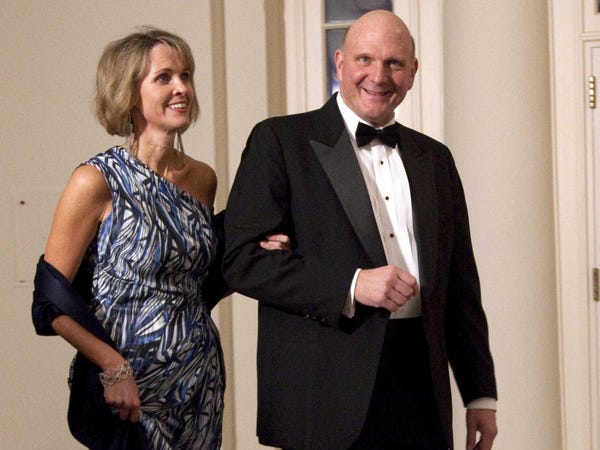 Connie Ballmer, a former public relations executive turned philanthropist, leads her family foundation's work with impoverished children, according to her biography on the Ballmer's Group's website.

Steve Ballmer made the couple's fortune after dropping out of Stanford's MBA program to become Microsoft's 30th employee, Forbes reports. Ballmer rose to become the software giant's CEO in 2000, a post he held for 14 years. The couple also owns the Los Angeles Clippers NBA team, per Forbes.

Jacqueline Mars, a part-owner of the world's largest candymaker, gave $500. 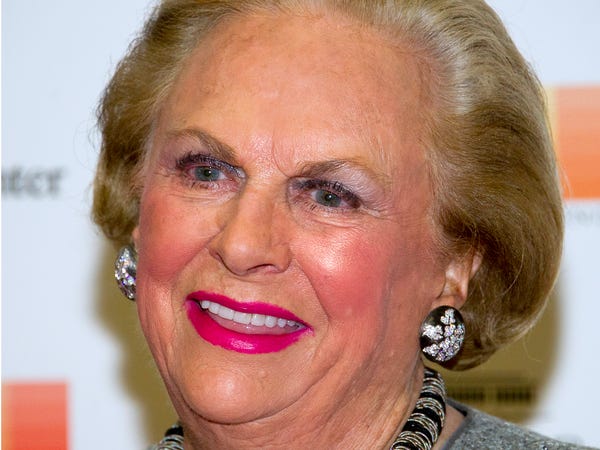 Jacqueline Mars, 80, is the granddaughter of Mars, Inc. founder Frank Mars, who started the company from his kitchen in Tacoma, Washington, in 1911.

The company produces Hershey's, Snickers, Twix bars, and M&Ms, in addition to several brands of pet food, according to its website. Mars shares ownership of the privately-held candymaker with her brother, John Mars, and her nieces, per Forbes. She is also a noted philanthropist and serves on the board of the National Archives.

Philanthropist Laurene Powell Jobs donated only $2,800 directly to Biden's campaign but has spent millions on other efforts that support the former vice president's bid. 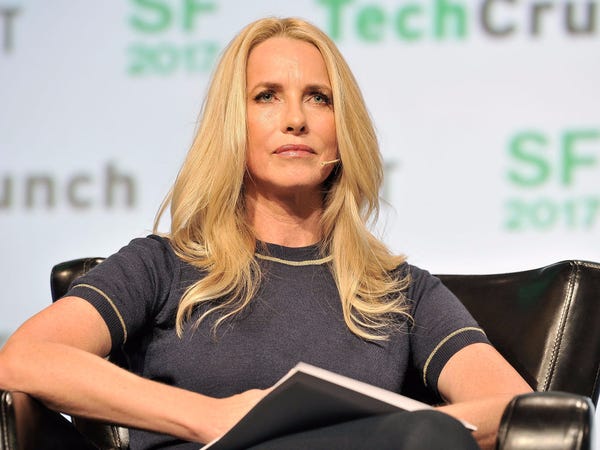 Laurene Powell Jobs is a formidable presence in the investing world, and will likely be one in the 2020 election too. The 56-year-old billionaire used the fortune she inherited after the death of her husband, Apple cofounder Steve Jobs, in 2011 to expand her own businesses and philanthropy, Business Insider previously reported.

Jobs is a long time Democratic donor, having backed Hillary Clinton's 2016 presidential bid by donating $2 million to her Super PAC and hosting a $200,000-a-plate fundraiser that raised over $4 million, CNN reported. 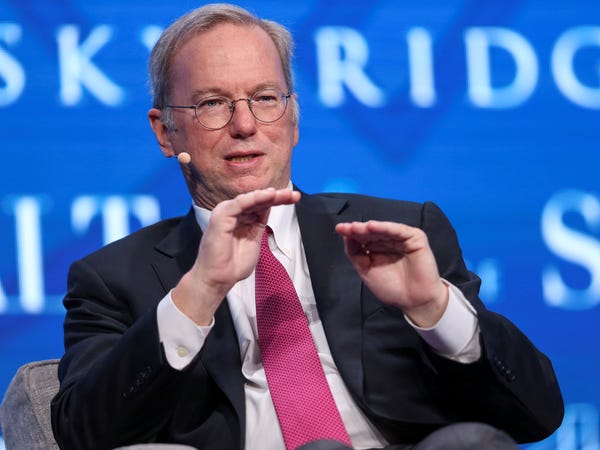 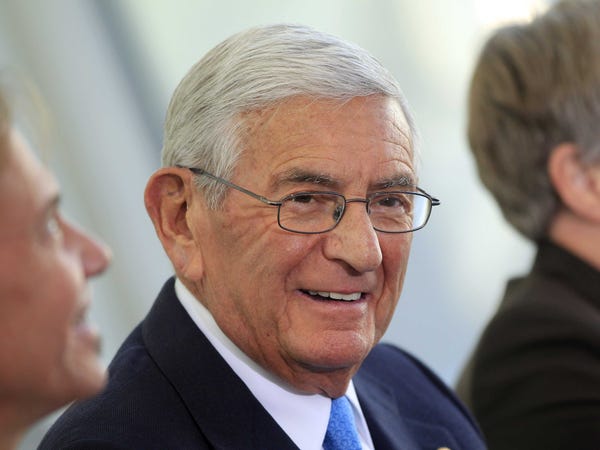 The son of Lithuanian immigrants, 86-year-old billionaire Eli Broad built his fortune after founding home builder Kaufman & Broad, per Forbes. The firm became one of the largest homebuilding companies in the country, according to Forbes.

Broad is also a prominent philanthropist, sponsoring several education-focused organizations through his two foundations and opening a museum in Los Angeles to share his collection of contemporary art with the public, per Forbes. 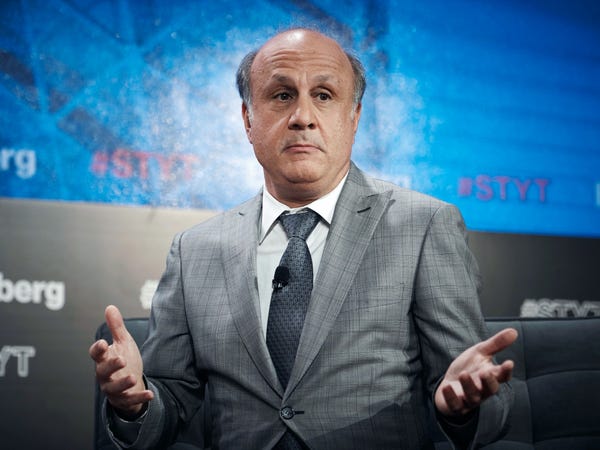 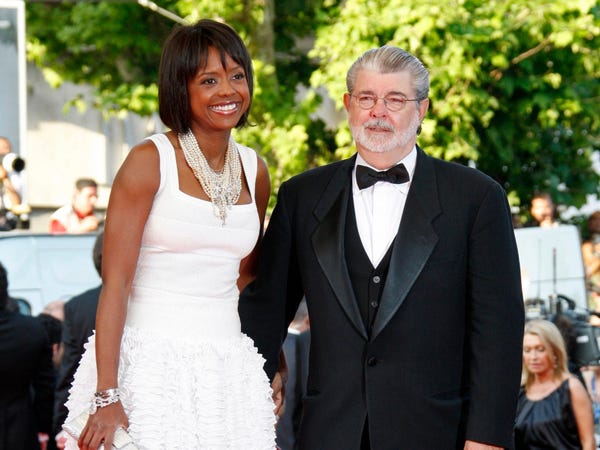 Mellody Hobson is the co-CEO and president of Chicago-based investment fund Ariel Investments. Hobson is also a noted philanthropist, having received the Carnegie Medal of Philanthropy alongside her husband, filmmaker George Lucas, in 2019. Hobson and Lucas operate a charitable family foundation that has over $1 billion in assets and completely funded The Lucas Museum of Narrative Art in Los Angeles, which is still under construction, per Forbes. 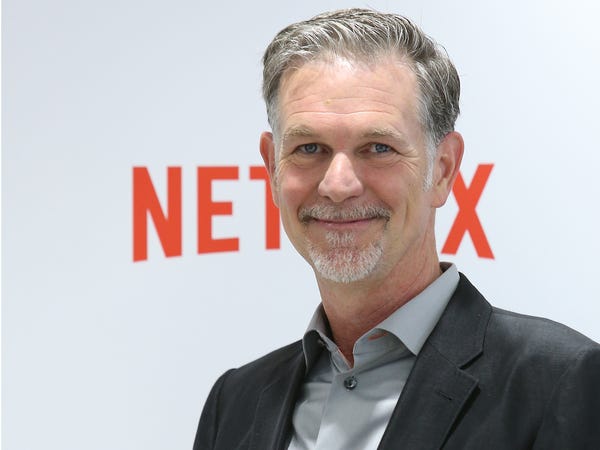 Reed Hastings, 59, cofounded Netflix in 1995 with Marc Randolph — a former employee of Hastings' first company, Pure Software — as a by-mail DVD rental service before transitioning it to streaming and content creation, per Forbes. Hastings' fortune comes from his 1.3% stake in Netflix, but he has said he plans to give most of it away as a signatory of the Giving Pledge, according to Forbes. 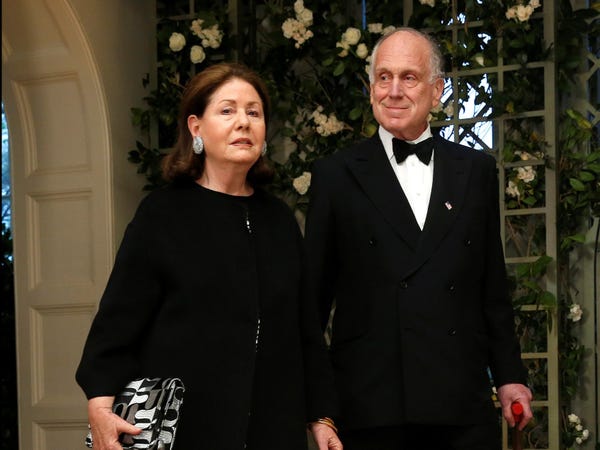 Jo Carole Lauder is a philanthropist focusing on civics and the arts, having supported MoMA and Mount Sinai Medical Center, according to the Carnegie Foundation.

Lauder's husband, Ronald Lauder, inherited much of the couple's fortune in the form of a stake in the eponymous cosmetics company founded by his mother Estée Lauder, per Forbes.

Jo Carole does not share her husband's political convictions, however. Ronald Lauder described himself as a "lifelong Republican" to The New York Times in December 2019, and donated $200,000 to President Trump's 2020 presidential bid. 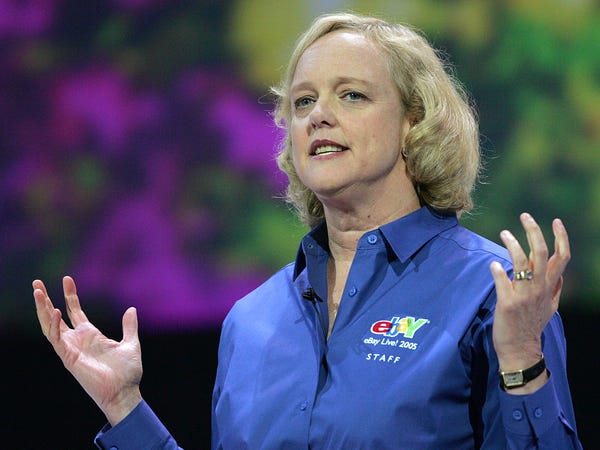 Meg Whitman may currently be the CEO of short-form video platform Quibi, but she made most of her wealth at her previous gig leading eBay, Forbes reported. Whitman was the auction site's CEO from 1998 to 2008, and then was the CEO of Hewlett-Packard from 2011 to 2015, Business Insider previously reported.

Whitman, 63, also once aspired to have a career in politics. She was the Republican nominee in the 2010 California gubernatorial race but was defeated by Jerry Brown. 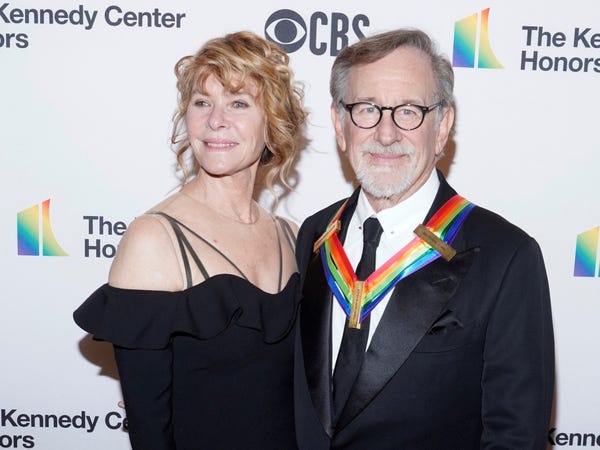 Net worth: $3.6 billion (attributed to Spielberg; Capshaw's individual net worth is not publicly available)

Steven Spielberg made much of his multibillion-dollar fortune from DreamWorks, the production studio he cofounded with Jeffrey Katzenberg and David Geffen. Most recently, the trio sold the studio's animation business to NBC Universal for $3.8 billion in April 2016, The New York Times reported. The 73-year-old Academy Award-winning director behind films including "Jaws," "Jurassic Park," "Indiana Jones," and "Schindler's List" not only profits from royalties from his films, but also gets a kickback from every ticket sold to Universal theme parks thanks to the rides based off of his films, per Forbes.

Spielberg's wife, actress Kate Capshaw, is also wealthy in her own right. Capshaw has starred in films including "Indiana Jones and the Temple of Doom," "Black Rain," "Dreamscape," and "SpaceCamp," per IMDB. 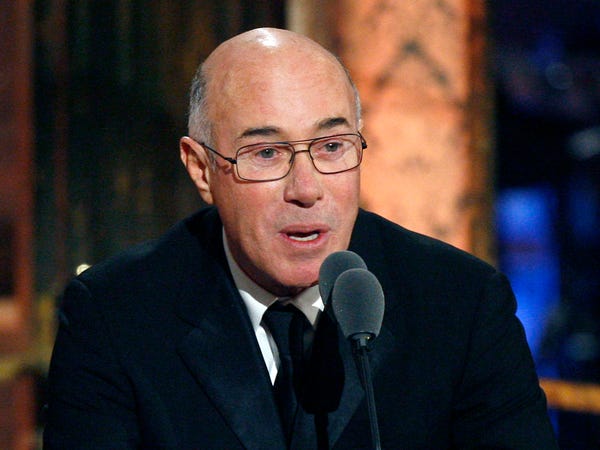 David Geffen, 77, cofounded DreamWorks alongside Spielberg and Jeffrey Katzenberg and ran its animation division until its April 2016 sale to NBC Universal, per The New York Times. Geffen has also founded several record labels, including Asylum Records and Geffen Records, according to Forbes. 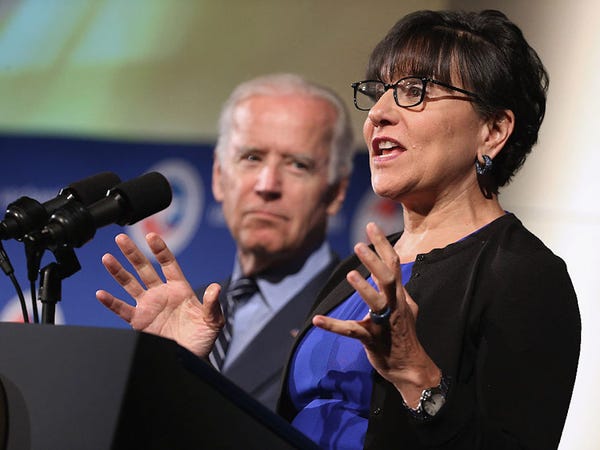 The Pritzkers are one of the richest families in America, with a combined net worth of $26.6 billion, Business Insider previously reported. Nine members of the family appeared on the Forbes 400 list of the wealthiest people in America in 2019 alone. The family fortune can be traced back to 1957 when Jay Pritzker, then a lawyer based in Chicago, bought a motel near the Los Angeles airport after noticing the need for more conveniently located high-quality rooms during a business trip there, per Business Insider.

Despite the family's fortune originating in hospitality, several members have gone into politics instead. Penny Pritzker was President Obama's Secretary of Commerce from 2013 to 2017 and J.B. Pritzker is the current governor of Illinois, according to Forbes. John Pritzker sold his stake in the family business to launch his own hotel chain that was later acquired by Hyatt, while Daniel Pritzker is a filmmaker, per Forbes. 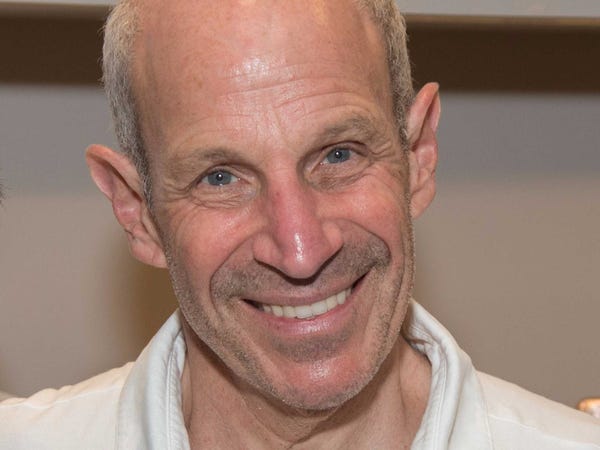 Jonathan Tisch, 66, inherited a stake in the Loews Corporation, the insurance and drilling conglomerate founded by his father Bob Tisch and uncle Laurence Tisch in 1946, per Forbes. Jonathan currently serves as the CEO of Loews Hotels & Co and is the treasurer of the New York Giants, the NFL team co-owned by his brother Steve Tisch, according to the Giants' website. 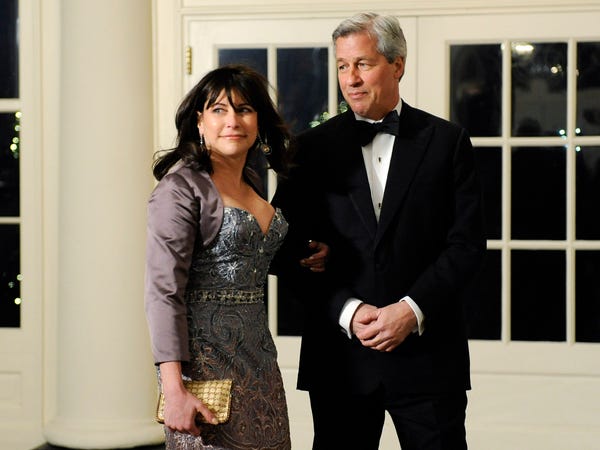 Judith Dimon is a graduate of Harvard Business School and former American Express employee, according to Heavy. Her husband Jamie Dimon is one of only a handful of billionaires in banking, making much of the couple's fortune cofounding Citigroup and later becoming the CEO of JPMorgan Chase.

Biden is reportedly considering appointing Jamie Dimon to a top position at the Treasury Department if he is elected, Business Insider previously reported. 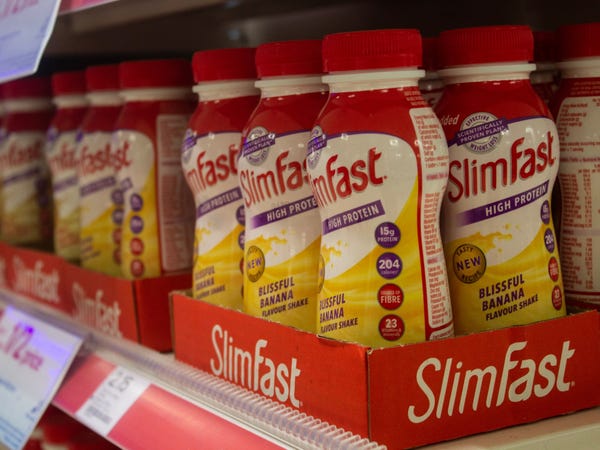 Instead of investing it like other billionaires, Abraham has kept much of his fortune in cash and put it into trusts for his four daughters, according to Page Six. A family feud erupted over the trusts in 2016, Page Six reported at the time.

LinkedIn founder Reid Hoffman gave over a million dollars to a pro-Biden super-PAC. 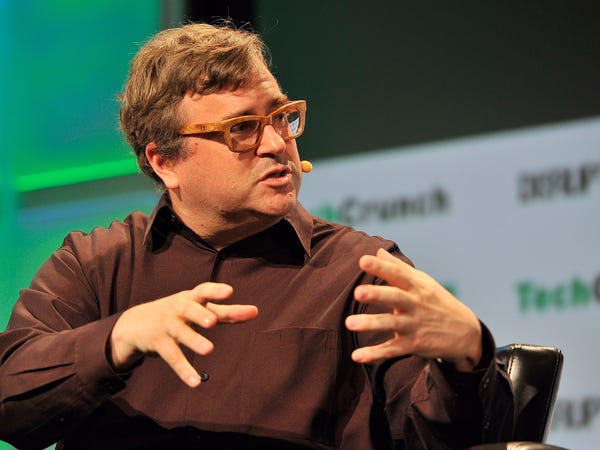 Hoffman is also famously a member of the "PayPal Mafia," a group of early PayPal employees that also includes Elon Musk and Peter Thiel that went on to found other, enormously successful Silicon Valley start-ups. 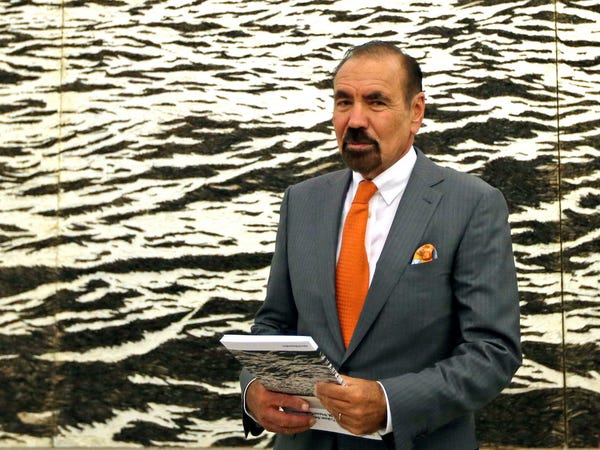 Ross and Perez don't share the same political values, however. Ross hosted a fundraiser for President Trump in 2019 that raised $12 million, sparking a boycott of several brands tied to Ross' Related Companies, including Equinox and Blink gyms and SoulCycle. 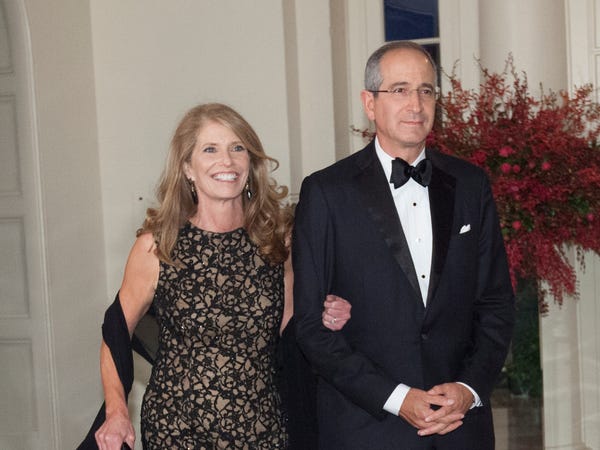 Aileen Kennedy Roberts is a philanthropist who serves on the board of Philadelphia art museum the Barnes Foundation and runs a family foundation with her husband Brian. She has been married to Comcast CEO Brian Roberts since 1985, per The Los Angeles Times. 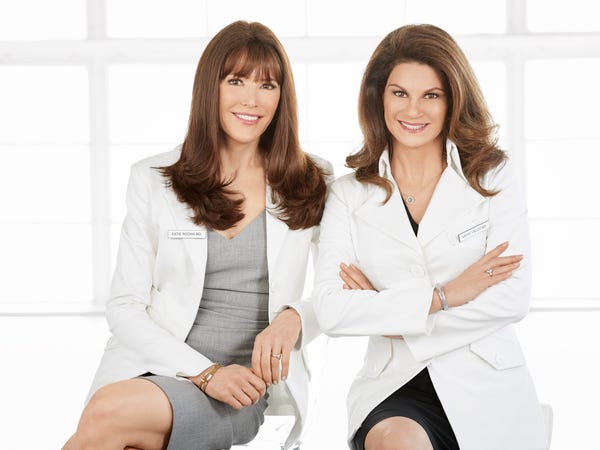 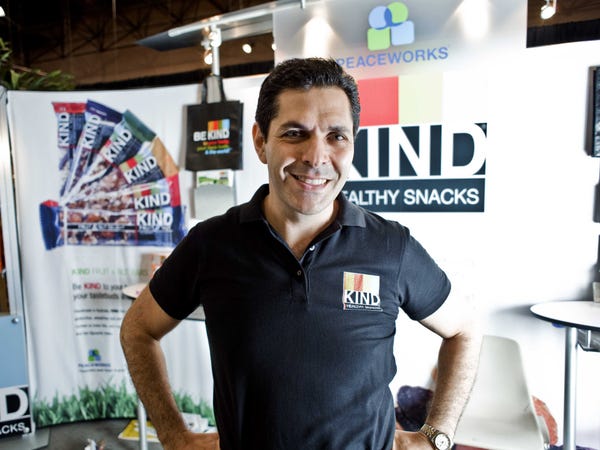 Daniel Lubetzky, 51, was inspired to create the first KIND bar after trying a snack bar made with whole fruits and nuts while on a business trip in Australia, according to Forbes. KIND Healthy Snacks has sold an estimated two billion all-natural bars since 2004, even attracting an investment from Snickers and M&M's maker Mars at a valuation of $4 billion in 2017, The New York Times reported.

Lubetzky and his wife Michelle share four children and live in New York City, per Forbes. 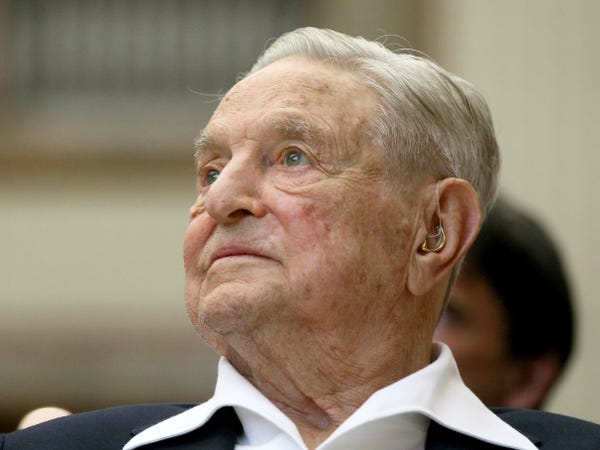 Soros, a former hedge fund manager and favorite target of right-wing conspiracy theorists, is now a full-time philanthropist, Business Insider previously reported. The 90-year-old billionaire is also one of the Democrats' biggest donors, having given $8 million to various groups during the 2020 election cycle, per Forbes.