Archaeologists in Russia discover stunning treasure trove of medieval silver jewelry buried a century before Mongols invaded and slaughtered EVERYONE in local village, with at least 100 decapitated

A hoard of finely made silver rings, bracelets, and pendants buried in the 12th century was recently uncovered by archaeologists in southwest Russia.

The rare treasure — which includes distinctive ‘seven-ray rings’ thought to represent the rays of the Sun — was found near the site of Old Ryazan, one of Russia’s most ancient cities and the site of a bloodthirsty Mongol attack in 1237.

It was common for wealthy Russian citizens to hide their treasures from the invaders, researchers say, but this 32-piece trove was stashed more than 100 years before the Mongols attacked.

Archaeologists with the Russian Academy of Sciences and the Ryazan Historical and Architectural Museum-Reserve are hoping to uncover why such valuable booty, dubbed the ‘Isad treasure,’ was secreted away without the imminent threat of attack.

‘Further studies of the treasure items, the technique of their manufacture, the composition of the metal will complement our knowledge of the early history of Old Ryazan,’ RAS researcher Alexander Morozov said, according to a translated statement from the Russian Academy of Sciences.

‘Possibly it will reveal the historical context of the concealment of the treasure.’ 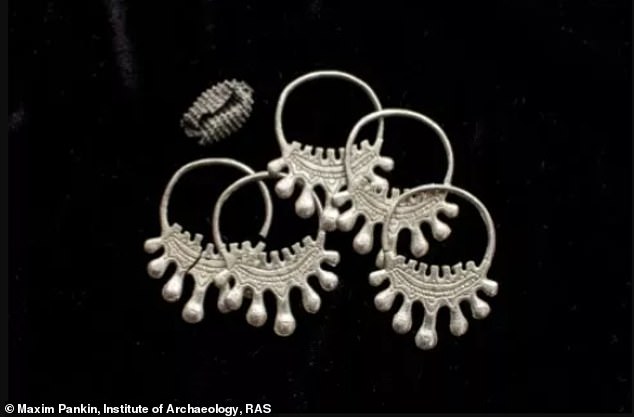 A trove of buried medieval treasure was discovered at the site of Old Ryazan, one of Russia’s most ancient cities. It includes several ‘seven ray rings,  thought to represent the rays of the Sun

The researchers say the items are well-made and typical of the traditional women’s costumes worn by Volga Finns, an ancient group of people living in Russia.

Thought to have been introduced from the Far East, seven-ray rings became a distinctive feature of early medieval Russian jewelry.

Some of the bracelets have three silver braids with embossed crosses and palm leaves—their style and technique also point to a 10th or 11th-century origin.

A disintegrated headdress was also uncovered, with the remains of spiral beads ‘and various appendages.’ 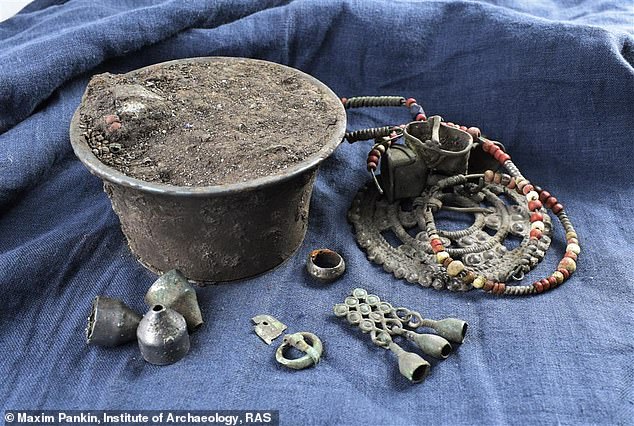 The treasure , found in Russia’s Suzdal Opolye region,  includes metal bowl with a loop-shaped handle (above) an unusual item for the region whose origin has not yet been deduced

The treasure, uncovered in what is now Russia’s Suzdal Opolye region, also included eight ‘grivnas,’ six-sided pendants made of precious metals that were worn around the neck.

Because of their uniform size—about 4.6 pounds—grivnas could also be used as currency or a standard weight measurement in medieval Russia. They actually give modern Ukrainian currency its name.

Archaeologists also found a metal bowl with a loop-shaped handle—an unusual item for the region, whose origin has not yet been definitively deduced.

‘At the moment, we can only assume that it is a Middle Eastern import that ended up in Eastern Europe long before the complex was hidden in the ground,’ according to the release. 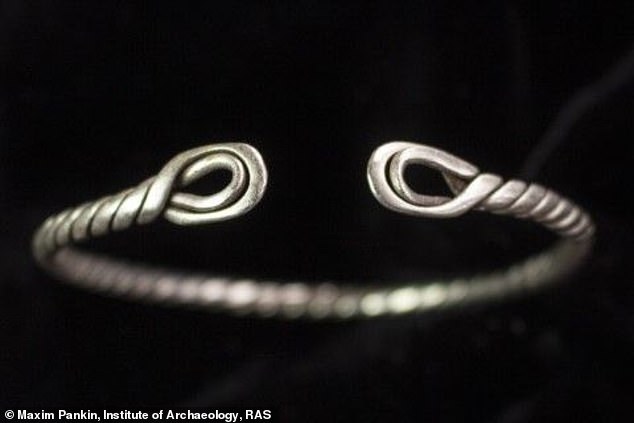 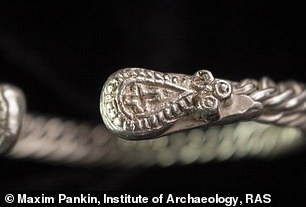 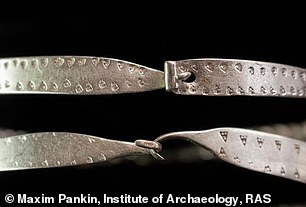 Some of the bracelets have three silver braids with embossed crosses and palm leaves. Their style and technique point to a 10th- or 11th-century origin, according to archaeologists with the Russian Academy of Sciences

Treasure hidden during and just prior to the siege of 1237 have been uncovered at Old Ryazan before: The famous Ryazan Barmy treasure—which includes a Rus prince’s coronation necklace now housed in the Kremlin — was accidentally discovered there in 1822.

Archaeologists say this hoard was buried in a forested area on the bend of the River Oka, a large tributary of the Volga, about 100 years before that deadly attack. 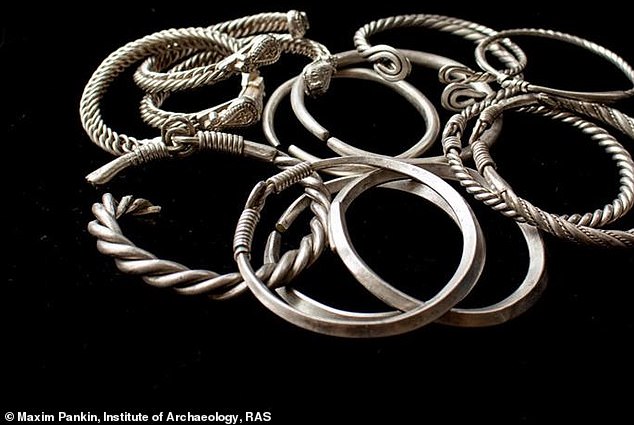 While many citizens buried their prized possessions during the Mongol sacking of  Old Ryazan in 1237, this 32-piece collection seems to have been stashed at least a century before

The sacking of Old Ryazan was as complete as it was vicious, with no survivors left and nearly 100 severed heads uncovered by archaeologists, Live Science reported.

Some 140 miles from Moscow, Old Ryazan was farther east than other Rus principalities and was the first to fall to Genghis Khan’s grandson Batu Khan, following a weeklong siege.

Khan’s forces went on to subjugate much of the Rus and his successors, known as the Golden Horde, ruled central and southern Russia for decades.

More than a dozen hidden treasure troves dating to the siege of Old Ryazan have been discovered since the 19th century. 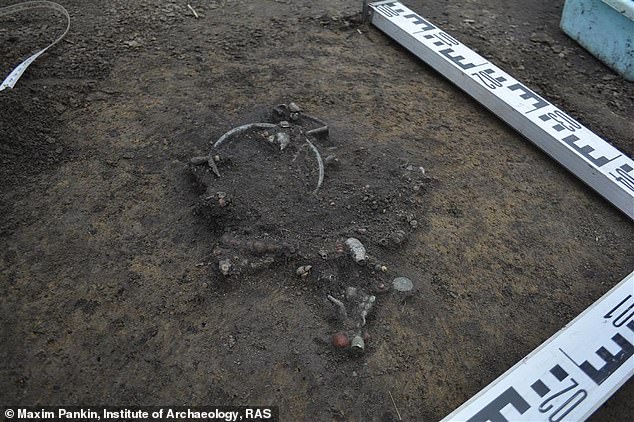 The treasure at Suzdal Opolye treasure in situ. It was uncovered in a forested area on the bend of the River Oka, a large tributary of the Volga

This hoard is an outlier, however. The RAS team dated it to the end of the 11 century or beginning of the 12th century, based on an analysis of the jewelry and nearby ceramics

‘The appearance of the objects of the Isad treasure allows us to attribute the time of its concealment to the early history of Old Ryazan, in which there are still many blank spots,’ Igor Strikalov of the RAS’ Institute of Archaeology said in the statement.

‘The Isad treasure is clearly older than the Old Ryazan treasure, it includes other types of ornaments made in a simpler technique and in a more archaic manner.’