Home » Lifestyle » MARTIN SAMUEL: The ESL is only 'suspended' so prepare for a return

MARTIN SAMUEL: The ESL is only 'suspended' so prepare for a return

MARTIN SAMUEL: The Super League is only ‘suspended’, so we must prepare for the resurrection of this ghastly plan… a simple Government charter will stop it EVER happening again

So we start with a blank sheet of paper, and on it we write:

‘[INSERT NAME] is a football club playing in the English football pyramid, and, as such, can only participate in competitions sanctioned by the English Football Association, UEFA and FIFA.

‘Any agreement or attempt to participate in a competition not recognised by these governing bodies will result in the club being placed under the control of an executive administrator appointed by the English Football Association, where it will remain until sold at a competitive market price.’ 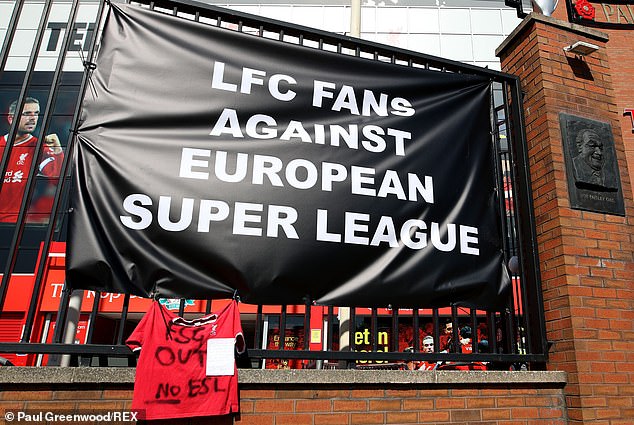 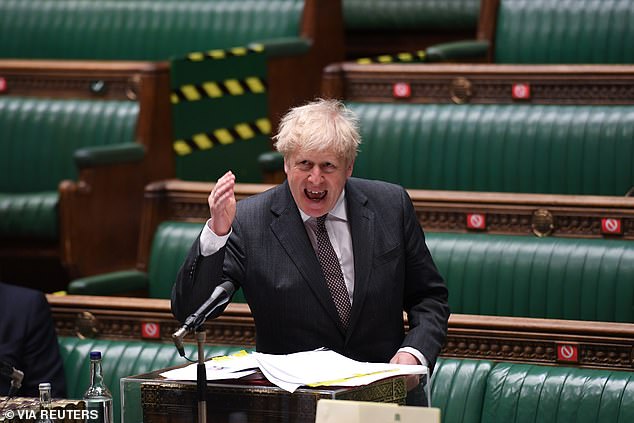 A proper contractual lawyer might want to tighten that up, but, pretty much, this should do it. We can call that the Breakaway Charlatans Rule and go from there. And if it hastens the departure from our game of the men who were plotting its ruination, well isn’t that the bonus?

A legislative bomb. That is what Boris Johnson promised English football to derail the Super League but, as we know, he’s rarely great on detail. So we might have to hurry him along.

Nobody should be under any illusions that this cartel is done. Some of its members may be. One imagines there is no appetite at Manchester City and Chelsea to tread this path again.

Yet the American owners, desperate Tottenham, Florentino Perez and Andrea Agnelli, we know their game. 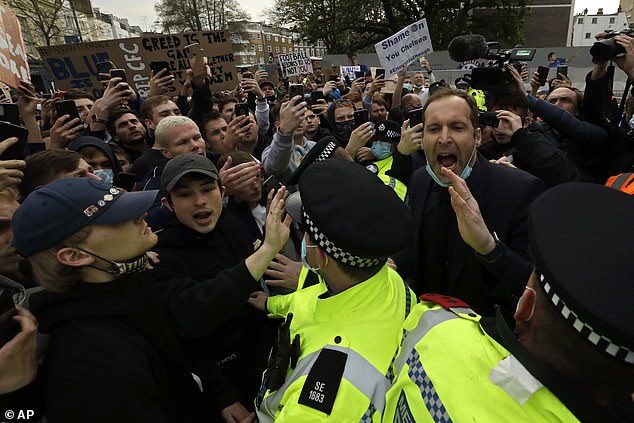 The Super League is ‘suspended’, said the statement. Suspended isn’t finished. A player who picks up two yellow cards in the same match is suspended. The game after that, he is back. So we must prepare for the resurrection of this ghastly plan, like the monster looming out of the darkened background in a horror film.

You thought he was dead. Here he is again, slashing wildly at all in his path.

The Super League’s protagonists are full of contrition — Manchester United’s Joel Glazer finally apologising on Wednesday afternoon — but do not be fooled.

This comes back, so the legislative bomb needs to be dropped, and quick. We haven’t time for more strategic reviews, more talking head politicians, their mates and a smattering of unemployed administrators angling to spend six months in meetings while chalking their every expense up to football. We know what is wrong and what needs fixing. Get it done. 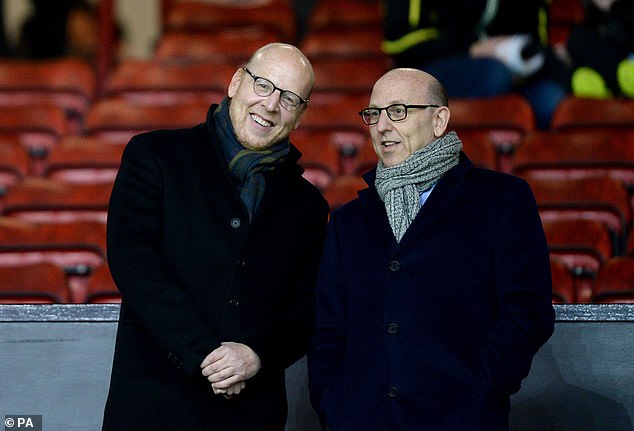 There is a strategic review taking place at the Premier League as we speak, and in the middle of it, six clubs shafted everybody and tried to check out. So make tweaks later. Right now we need to ensure the future of our game is secure.

A Government charter, to which every club must sign up by law, must make any breakaway illegal. Then we can fine-tune the rest. After clause one has passed, it should get personal. Each club receives its own Government-approved articles protecting what is most important. Name, location, colours, the soul of your football club. Where it resides, what it is called, how it looks.

No more Hull Tigers or Milton Keynes Dons, no moves up the M1, no more blue shirts turning red. The Super League struck at the heart of competition and meritocracy and impacted on every club in the league; but that does not mean there have not been travesties of a grand nature lower down.

So, clause two. ‘The name of this club is HULL CITY.’

In 2013, Assem Allam, owner of Hull, had the club re-registered as Hull City Tigers Ltd. He said that next year they would be renamed Hull Tigers. Fans began marching under the banner ‘City till we die’. 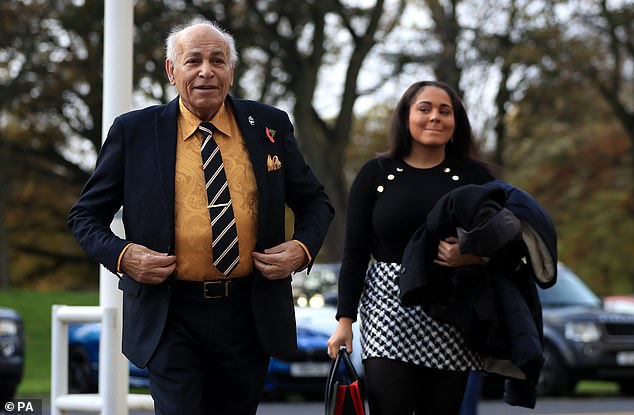 The following year the FA rejected the proposed name change. Allam said he would not invest in the club unless he was allowed to alter its name.

Hull were a Premier League team in 2013, and reached Europe the following year. They are currently seeking promotion from League One. Allam is still the owner.

Yet if there was a charter for each club, enshrining its name, then the conflict over Hull Tigers could never have even begun.

Leading to clause three. ‘AFC WIMBLEDON will play home matches within a 10-mile radius of Plough Lane, KT1 3PB.’ Let’s call this the Milton Keynes clause. Arguably the greatest outrage in English football history — until this last one, and there are a few contenders — was the idea that the survival of Wimbledon FC was ‘not in the wider interests of football’.

It is a minor miracle that the phoenix club AFC Wimbledon got to carry on their name and presence in south London and have thrived, but the decision to allow Wimbledon as was to be swallowed whole and spat out 80 miles north in Buckinghamshire should never be repeated.

Clubs can move grounds, clubs can relocate to the outskirts of their city if needs be, but any charter should establish a defined area that is represented.

These are not franchises, the Dodgers moving coast to coast. They represent a town, a city, a location, and there they should remain. No owner should be able to alter that.

Clubs should be recognisable too. Charter clause four: ‘CARDIFF CITY play in predominantly blue shirts, the rest of their strip is white and/or blue’.

So Vincent Tan could not have changed Cardiff’s strip from blue to red on a personal whim, as happened in 2012. Cardiff had never worn red. Cardiff have been blue since 1908. Sometimes blue with white sleeves, sometimes blue with a single yellow and white stripe. Either would be permitted. We’re not the fashion police. 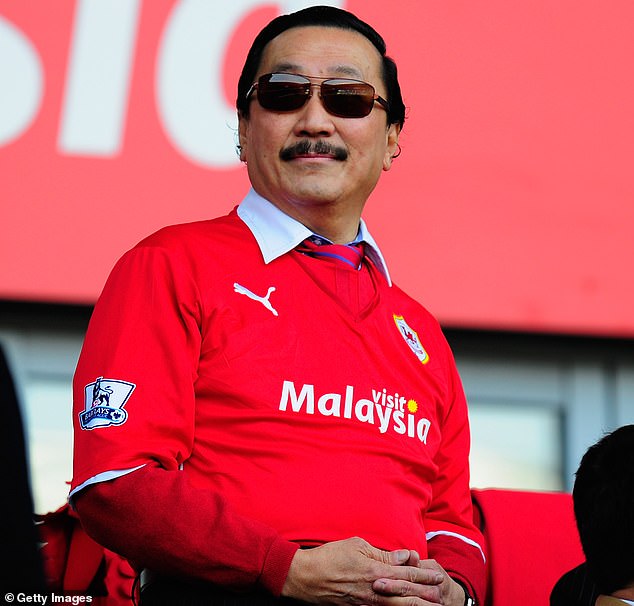 Not red, though. The identity of every club is its first-team colours and these should be made immutable and Tan-proof.

Anything else? Well, yes. In 2006, Alexandre Gaydamak, the new owner of Portsmouth, had all of HMS Warrior’s furniture chucked in a skip.

It had resided in the boardroom and, yes, probably looked old and musty to untrained eyes. Even so, it was part of Portsmouth’s heritage and should have remained at Fratton Park on display in some capacity.

Every club has a relic like that, a part of its history, and it should be in the charter so no owner can come in and flatten the cottage at Fulham, or smelt the Shankly Gates, or remove Arsenal’s clock.

It doesn’t have to be a finite object; if it matters most to Spurs fans that the club plays in all white when in Europe, enshrine that. If Birmingham City’s badge is considered a masterpiece by the locals — and it should be — put it in. 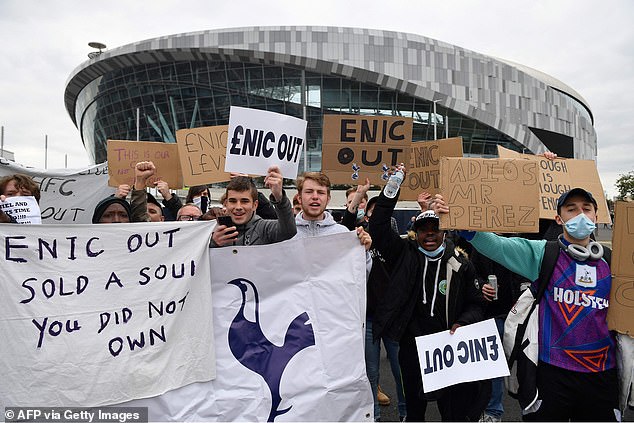 One characteristic for each club, as chosen by its fans, that no owner can touch because it is protected by Government charter.

And that’s it. Five points, four unique to each club, that protect its individuality and place in our game. The Government are looking at competition law as a way of preventing a breakaway happening again, and say they will move with urgency. That’s admirable, but will it go far enough?

It was the owners who placed English football in jeopardy, and they dragged their clubs with them. We don’t have to give half of the business away, we don’t need endless reviews.

We just need a very simple, very short charter, that binds the clubs to our league, to their homes, to their identities and to the fans. And we need it before the launch of the next grand plan.

For there will be one. These people will not go away. Not unless we make them.