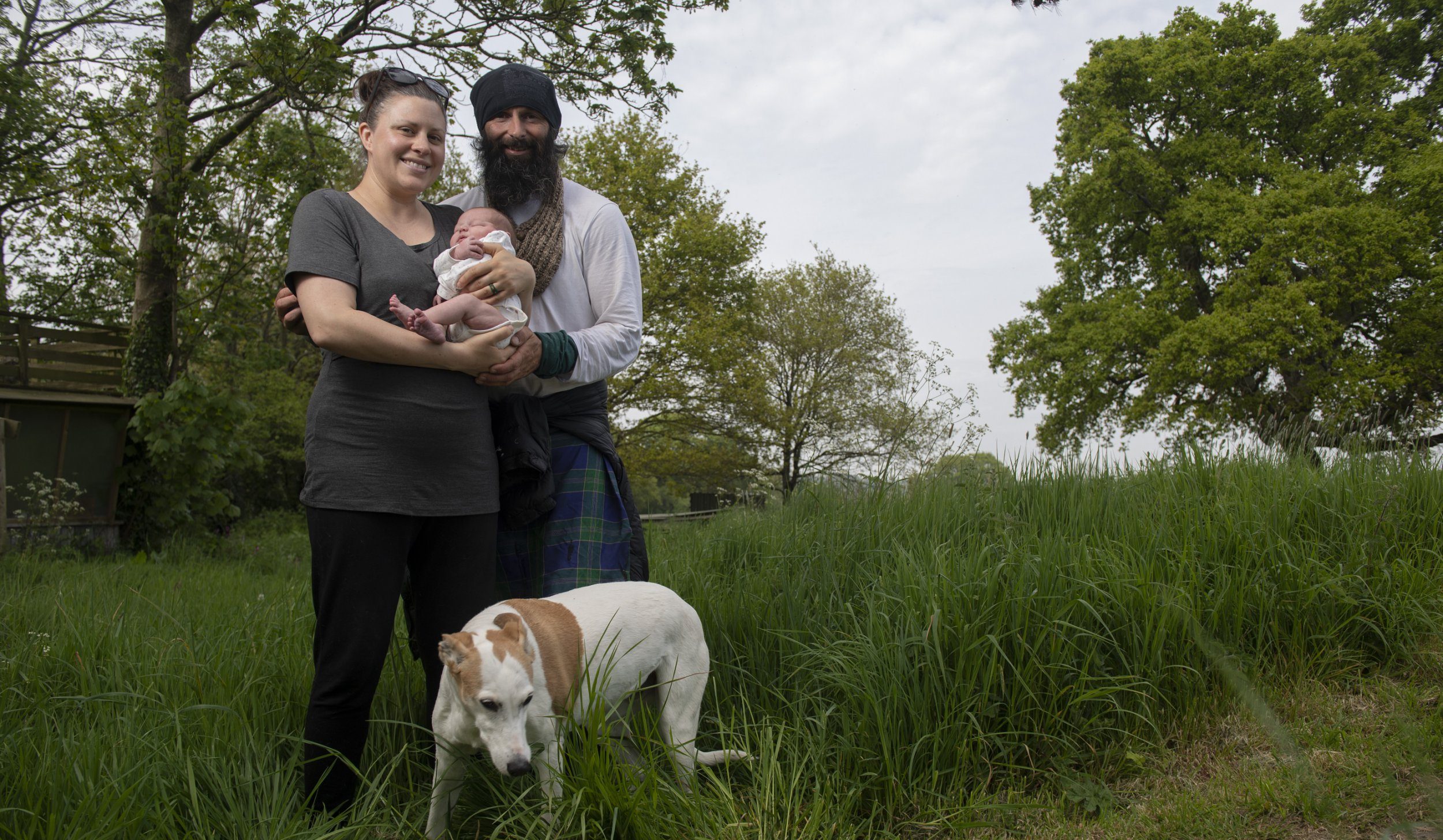 Sometimes, a coincidence really can change your life forever.

When Chris Lewis embarked on an epic solo quest to walk the entire British coastline in 2018, he probably didn’t expect to end it with a dog, a partner and a newborn baby.

Four years ago, the former paratrooper decided to loop around the UK after years of struggling with anxiety and depression.

Now, he is raising a baby with the ‘love of his life’ – a woman he met on the trail.

Kate Barron bumped into 42-year-old Chris on a walking trail in Wick, Scotland, back in August 2020.

The 35-year-old former teacher was taking her own solo-walking trip when she decided to chat to Chris, who had set up a little tent at the side of the trail.

‘We met at the Whaligoe Steps near Wick on the north east of Scotland,’ Chris explains.

‘I was camping at the bottom of the steps as she walked down. She came over for a chat because she was curious, then she said she had to go and find somewhere to camp.

‘About 40 minutes later she came back with some fish and chips and said, “I can’t find anywhere to camp – you seem to know what you’re doing.”

‘We spent the whole night talking – we just clicked.’

Less than a year later, during an overnight stay in Whitby, East Yorks, Chris and Kate conceived little Magnus, who was later born via caesarean section weighing 8lbs 14ozs.

The smitten couple is now resting up in a yurt on a campsite near Dorchester. Afterwards, they plan to get back on the trail in Hastings to finish the 8,000 mile circular loop.

They will end up back in Gower Peninsula in south Wales, where Chris is from.

There’s no denying the couple gave up a lot to commit to this life on the road.

When they met, Kate had spent the last decade working as a primary school teacher in southeast London. After that first night spent chatting over fish and chips, Kate had to go back to work.

‘It was really sad,’ Chris remembers. ‘We kept in touch for six weeks then she came and met me for our first proper date in a bothy. That’s when we admitted that we were in love.

Kate had been using the money to fund her own walking adventures and wanted to life a more nomadic life. Then she unexpectedly met Chris, and the ‘stars seemed to align,’ she says.

‘He was doing the sort of thing that I’d been trying to steer my life towards. I knew it was the right thing to do but it was scary – it’s difficult to just say goodbye to something you’ve given 10 years of your life to.

‘I’d worked my socks off as a teacher and I wanted to use my skills in a different way.

‘It was a very dramatic change of lifestyle.

‘I was working in London as a teacher trainer and using the money to fund my own adventures but when I met Chris the stars seemed to align.’

The couple had been staying in a stable when they realised Kate was pregnant. They kept walking but took it easier – resting when they needed to.

Eventually, they made it to Hastings, in East Sussex, before Kate needed to stop.

‘Towards the end of the pregnancy, we were spending more and more time in people’s sheds and sofas because Kate was struggling with the tent, so I took the decision to go to a friend’s yurt in Dorset. When we got there we had to go to hospital because of complications,’ Chris recalls.

‘Kate and the baby came out after two days and we’re going to spend another month here until they’re both strong again. After that, we’ll take it day by day. I think we’ll have to get a bigger tent.’

It’s no easy feat, carrying everything you need to sustain two grown adults, a dog and a newborn baby.

As well as carrying Magnus in a sling, they have to lug 10 litres of water and roughly 50 kilos of supplies and equipment including their tent, food, dog biscuits, clothes and nappies.

As a lot of the south is agricultural, it’s hard to find clean drinking water, so Chris has been carrying a five-litre bottle in each hand just to keep them going.

Luckily, since the two are doing this for charity, they have plenty of followers on hand to help them spread the load.

Chris, who served for six years as a paratrooper, has so far raised £272,000 for SSAFA, the armed forces charity. And the couple are determined to finish it, even with the baby in tow.

He adds: ‘It’ll be challenging but we’ve gotten this far and we believe we can do it.

‘We absolutely adore what we are doing so we’re going to go straight for a lap of honour. I’ll probably cycle the whole thing and Kate will follow me in a van.’

After finishing the mammoth challenge, the new family will slow down for a little bit, but they plan to continue this lifestyle.

Chris continues: ‘We’re going to settle in the UK for a few years so Magnus can grow before heading further afield. Whatever we do will be for charity.

‘We’d like to spend some time on an uninhabited island to teach the little one foraging.’