Makeup artist opens up about his alcohol addiction during lockdown

Makeup artist, 25, who drank TWO LITRES of spirits a day while in the grips of an alcohol addiction reveals how he came out the other side

By September of 2021, it got to a point where the 25-year-old makeup artist would wake up, roll out of bed and pour himself a glass at 8am.

But he told himself he didn’t have a problem because he wasn’t hiding his alcohol addiction.

‘I never thought anything of it, I never stopped myself or questioned it,’ Criss told FEMAIL.

Criss said his ‘craving’ for alcohol had complete control over him, eventually becoming unable to function day-to-day without having a drink. 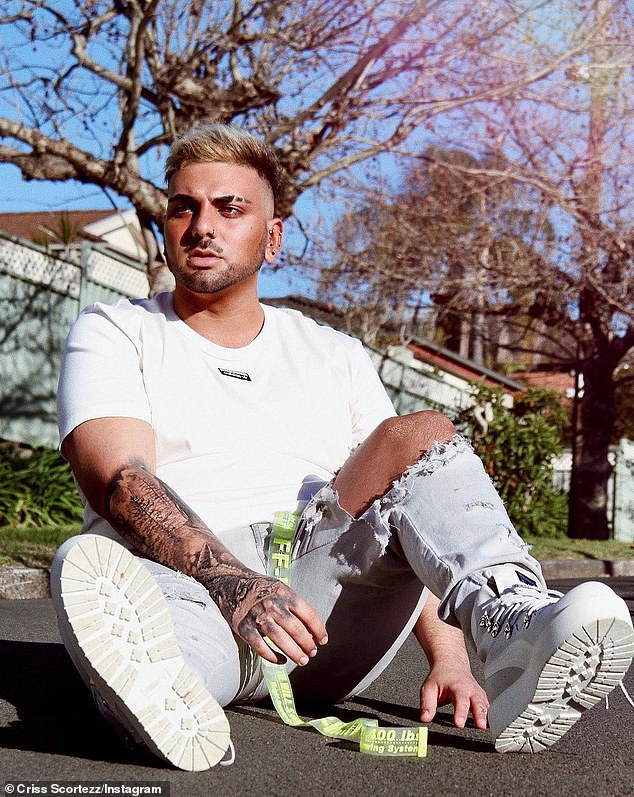 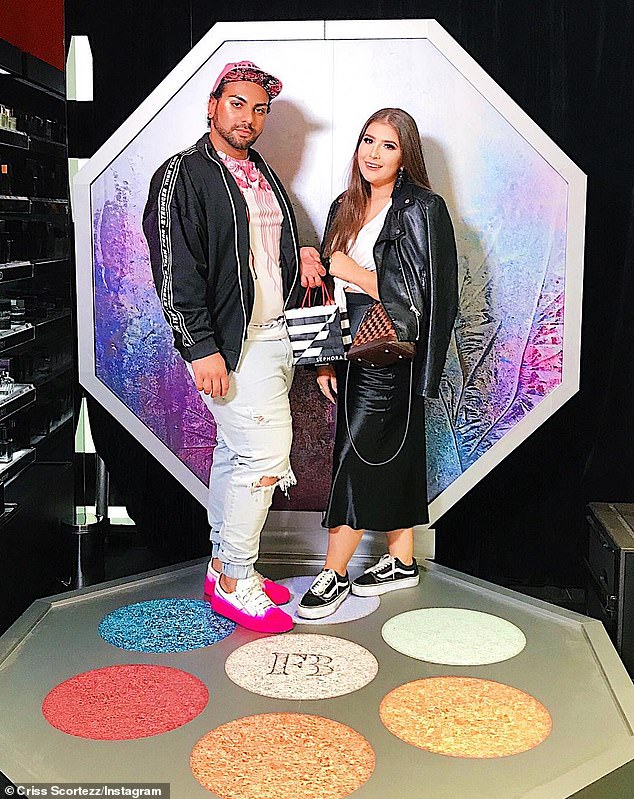 The 24-year-old makeup artist (pictured left) would drink 2L of spirits daily out of ‘boredom’ but he never questioned his actions. By September 2021 it got to a point when he would wake up, roll out of bed and pour himself a glass at 8am

When the lockdown began in late June last year, Criss said he quickly became bored being stuck at home with no-one to talk to, as his family members were essential workers and out of the house.

‘I just figured [drinking] was a good way to pass the time, then everything became revolved around having a drink,’ he said.

‘I never used alcohol to try “escape” from something, that’s why it took me so long to realise I had a drinking problem.’

Criss only drank spirits, rather than wine, because it did not make him feel as bad the following day.

Initially he’d consume a 2L bottle of alcohol every five days – but over time the drinking slowly increased to consuming the huge amount daily.

Strangely he never felt sick, hardly had a hangover the following morning and was able to mask his behaviour to others.

Criss said he would tell himself ‘you’re just bored’, ‘you don’t have a problem because you’re not trying to hide anything’ and ‘you’re still getting out and doing things’ to justify his habits.

‘I was having fun and enjoying myself – I was never sad and that was enough to keep drinking,’ he said.

‘My mind told myself if I’m awake I should be drinking.’

After having lost weight in 2019 he gained 50kg over four months due to his excessive drinking.

Not only did his addiction affect him physically and mentally, it also took a toll on his bank account – he would spend $910 a week, or $3640 a month, on booze.

‘A bottle was around $65 and I would buy two at a time; When I was able to I’d go into the bottle shop at different times of day so the staff didn’t notice me, otherwise I would have it delivered,’ he said.

‘It really took a toll on my bank account and savings.’ 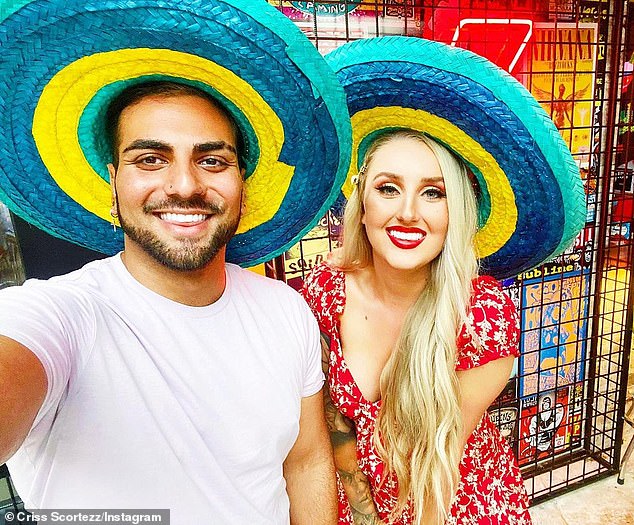 Criss (pictured left) only drank spirits, rather than wine, because it did not make him feel as bad the following day. His crippling habit continued for six months

Criss only recognised he had a drinking problem when he started looking for alcohol at home, not realising he had already drunk it all.

‘It hit me when I realised I was going through 2L of spirits a day and was going to buy more,’ he said.

‘The feeling of knowing I’m going to get another bottle and was satisfied with that was enough for me to realise and think “okay this is a real problem”.’

But it still took time for Criss to change his habits.

‘Then I didn’t drink as heavily – I was only drinking half the amount I was, which is still a lot,’ he said. 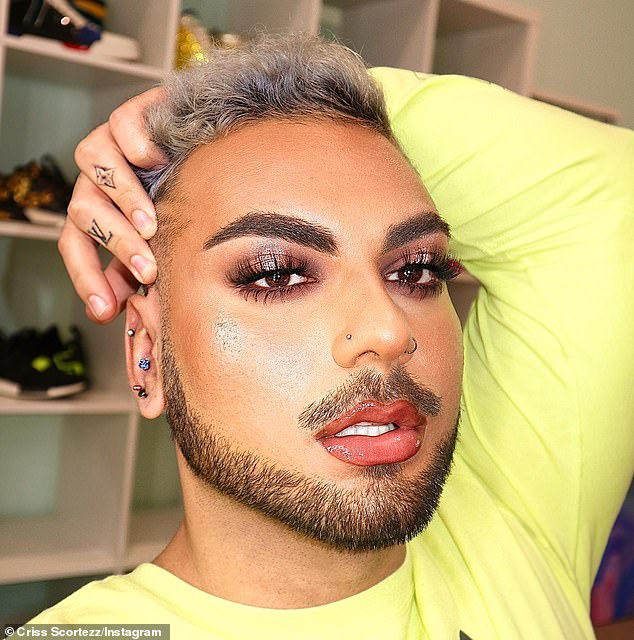 Criss (pictured) only recognised he had a drinking problem when he started looking for alcohol at home, not realising he had already drunk it all. In December last year he turned to Alcoholics Anonymous (AA) for assistance

Criss slowly started drinking less over time. Then in December last year, when he felt incredibly nauseous after having a drink one day, he turned to Alcoholics Anonymous (AA).

During each one-hour online AA meeting he would have open conversations with others who also had a problem with alcohol, and felt comforted knowing he was surrounded by people who knew exactly how he felt.

Criss said whenever he had a craving to drink, he would join an online meeting to help subside it. He found medical cannabis assisted with the cravings too.

In February 2022 he stopped drinking entirely for three-and-a-half months before ‘accidentally’ relapsing.

He said he was at an event and mistakenly believed the drinks being served with non-alcoholic.

‘My friend came up to me and said “what are you doing drinking?”, and I reassured her it’s a mocktail. But she said they’re not,’ Criss said.

Following his relapse he had a period of drinking alcohol again once a week.

But in the last four weeks he has remained completely sober.

Criss urged others who may he struggling with alcohol addiction to seek help.

‘It’s not embarrassing, it’s the best thing you’ll ever do,’ he said.

Guideline 1: Reducing the risk of alcohol-related harm for adults

The less you drink, the lower your risk of harm from alcohol

Guideline 2: Children and people under 18 years of age

To reduce the risk of injury and other harms to health, children and people under 18 years of age should not drink alcohol

Guideline 3: Women who are pregnant or breastfeeding

To prevent harm from alcohol to their unborn child, women who are pregnant or planning a pregnancy should not drink alcohol

For women who are breastfeeding, not drinking alcohol is safest for their baby

The guidelines are set in place to reduce health risks