Does wearing a dress REALLY make you less of a man? After Harry Styles’ Vogue cover was met with calls to ‘bring back manly men’, a brave MailOnline reporter tests how masculine he feels while parading the streets in a ruffled blue frock

Harry Styles made history this month as the first solo male cover star of US Vogue in its 127 years wearing a tiered blue ruffled dress, while he sported a selection of skirts and frocks for a glossy fashion shoot inside the magazine.

Following the magazine’s release, right-wing commentator Candace Owens hit the headlines by blasting the styling and the ‘steady feminization of our men’, calling for society to ‘bring back manly men’.

Ben Shapiro, another US-based right-wing commentator, agreed with Owens, writing on Twitter: ‘The POINT of Styles doing this photo shoot is to feminize masculinity.

Further criticism poured in from all corners of the globe, with Piers Morgan branding the look ‘all a bit weird’, but others hit back at the commentary, with actress Olivia Wilde branding Owens ‘pathetic’.

So, do people really care if a man wears a dress, and more crucially – does it really make you less of a man?

MailOnline reporter Rory Tingle took to the streets of London in Harry Styles-inspired dress, to gauge people’s reactions and see how it really feels to adopt feminine style… 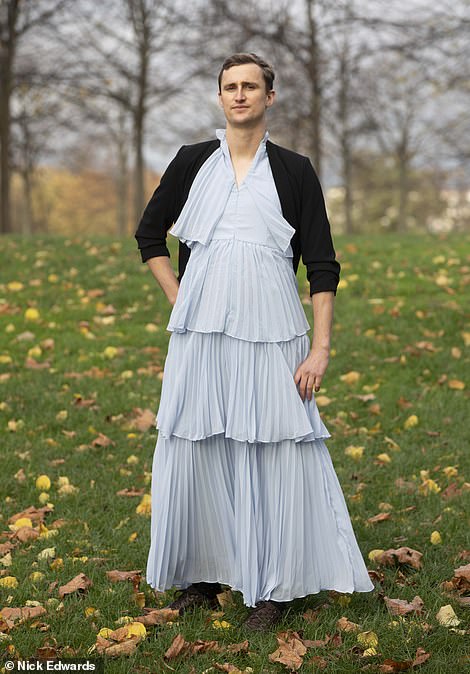 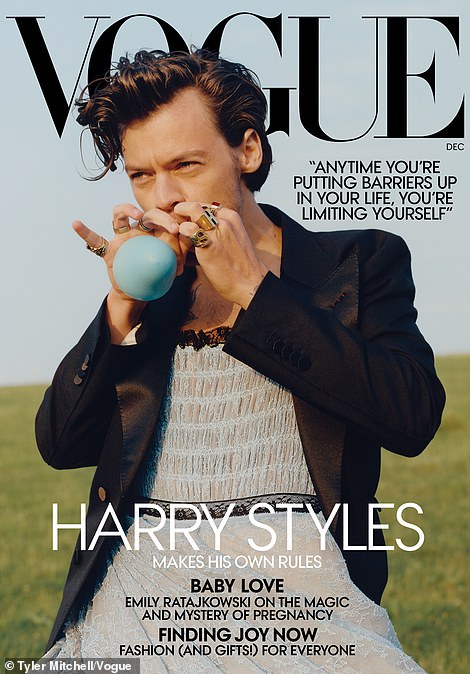 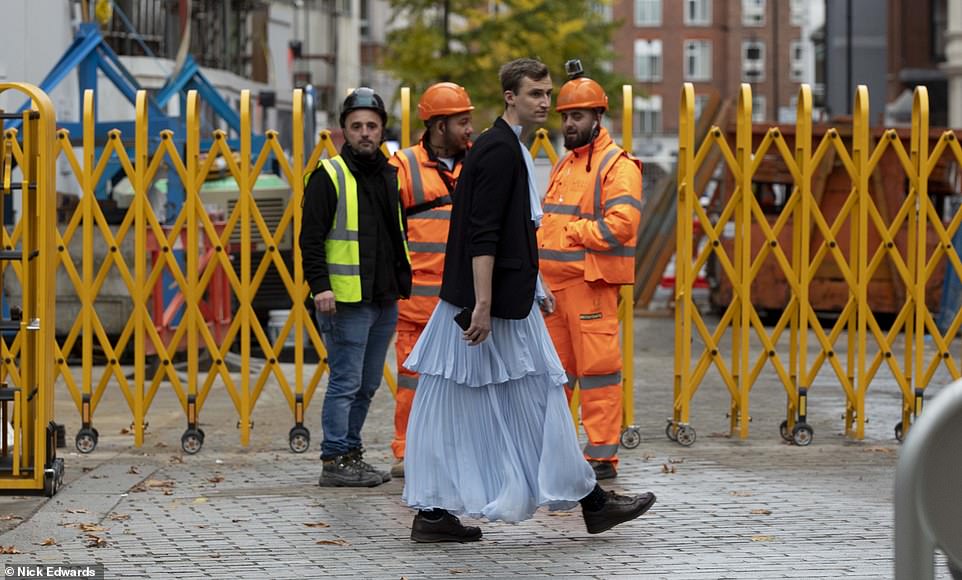 During his stroll around town in the dress, Rory attracted some baffled glances from builders as well as a few wolf whistles  – and even a marriage proposal

Today I arrived at the office, had a cup of tea, and walked around London wearing a dress.

Harry Styles, 26, shook up the entertainment world last week by donning a ball gown on the front cover of US Vogue – prompting right-wing pundit Candace Owens to fume ‘bring back manly men’.

She claimed the ‘steady feminisation of men’ represented by Styles’ clothing choice showed modern males could no longer be relied upon as the ‘strong’, dominant sex, and that most people support traditional understandings of gender.

On that basis, it was decided someone would have to put her theory to the test.

Would they feel less of a man going out in a dress? Would it affect their sense of self-worth or how other people perceived them? 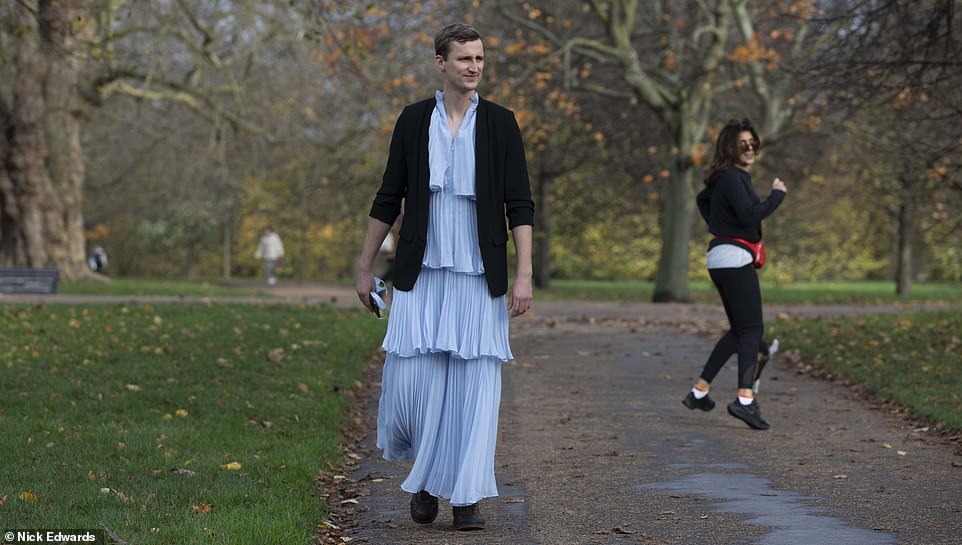 Sauntering around Kensington Palace, joggers glanced and smartphones emerged from behind palms to take a not-so-subtle photos of Rory 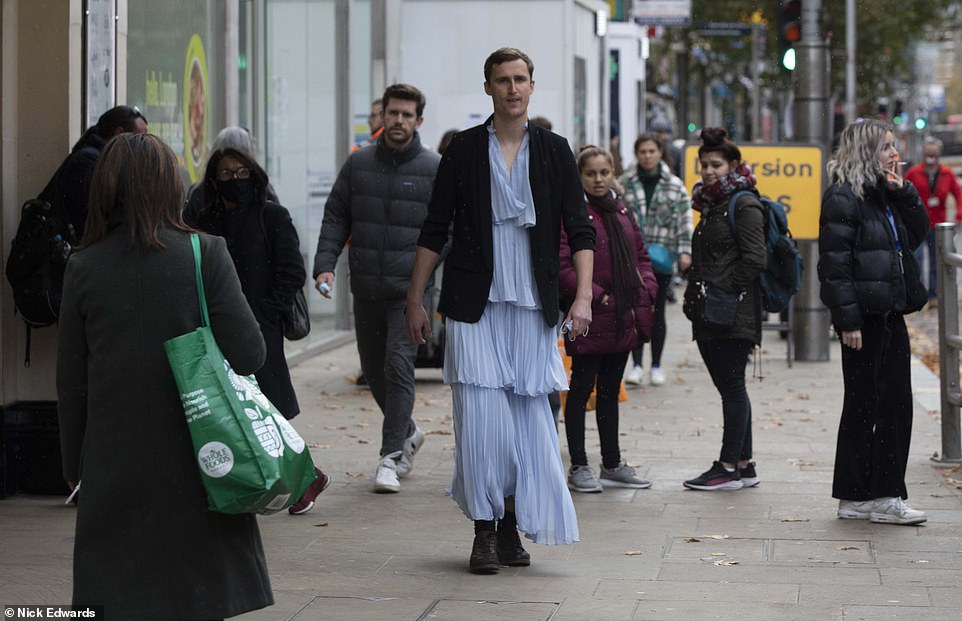 Rory headed out along Kensington High Street, the high-end shopping district at the heart of London’s second richest borough, with many onlookers getting a glance

One clumsy outfit change later, I moved down the escalator, blathered an explanation to the baffled security guard, and strode out into a grey Wednesday afternoon.

Waiting briefly by the entrance for the photographer, I steeled myself for the challenge ahead.

My stage was High Street Kensington – the high-end shopping district at the heart of London’s second richest borough.

Lack of pockets aside, the baby blue ball gown was fairly comfortable, ignoring the minor annoyance of having to lift it off the ground while walking over a puddle.

Right-wing pundit Candace Owens fumed that we need to ‘bring back manly men’, after seeing Harry Styles in a series of dresses, which inspired Rory’s look 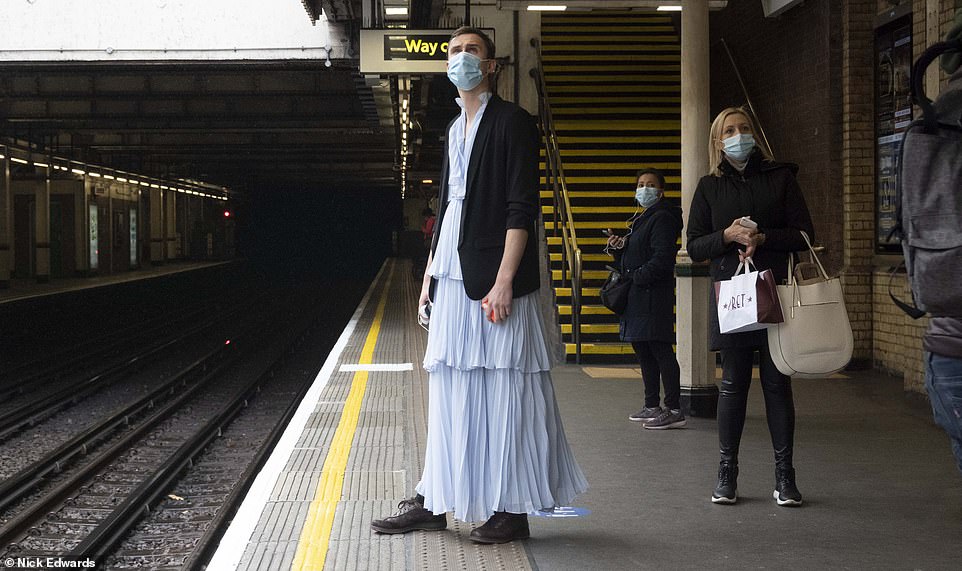 Harry Styles made history by posing for Vogue, the first solo male to do so in the magazine’s 127-year history.

But Harry, who sported a dress and traditionally feminine clothes, caused outrage among right-wing commentators.

Candace Owens took umbrage to the singer’s shoot on Saturday, writing: ‘There is no society that can survive without strong men … bring back manly men.’

She called the photos a ‘steady feminisation of our men’ in a thread of tweets on Monday morning.

Many hit back at Owens, with Olivia Wilde branding her ‘pathetic’.

Ben Shapiro, another US-based right-wing commentator, agreed with Owens, writing on Twitter:  ‘The POINT of Styles doing this photo shoot is to feminize masculinity.

‘Otherwise why would it be headline-worthy for Styles to don a dress?’

He went on to say: ‘Pretending that men dressing like women does not feminize men is ridiculous, particularly coming from the same people who are celebrating Styles BECAUSE he is feminising masculinity.

His co-host Susanna Reid objected that women could wear trousers, Morgan added: ‘But Harry Styles looks weird here, it’s all a bit weird. He’s not going to go out for dinner like this.’

Piers continued: ‘He’s pushing the boundaries of fashion. The question is, some women say he looks great – how many women would like it if their husband turned up for dinner in a dress? That’s the question.’

The same could not be said for the black jacket – modelled on Styles’ Gucci number’ – which was several sizes too tight and cutting into my forearms.

Unbowed, I crossed the road and joined the crowded pavement – glancing up at passers-by to gauge their reaction.

The majority avoided eye contact and stared straight ahead, while others giggled or gave a bemused smile.

The most common reaction was to ask what I was doing (a forensic awareness of pop stars’ clothing choices clearly not being common among the good folk of Kensington).

There was plenty of love out there too.

A ‘nice dress’ here, a ‘you look beautiful’ there, a wolf whistle from a passing truck driver – and what I took to be a marriage proposal.

Buoyed by the praise, I popped into the local M&S to browse the selection of seasonal knitwear before treating myself to a hot drink from a cafe.

My next call was High Street Kensington Tube station, where I tapped in at the gate and got on the next eastbound Circle Line train.

At Gloucester Road I encountered the only bit of marginal hostility, with an elderly man asking ‘Are those your normal clothes’, before rolling his eyes when I said no.

(My cover was maintained).

I walked down the road to Kensington Palace Gardens.

Sauntering around Wills’ and Kate’s stomping ground, joggers glanced and smartphones emerged from behind palms to take not-so-subtle photos.

It was now time to re-enact the Styles cover shoot, so I traipsed up a muddy hill – feeling not entirely cover material – and did my best impression ready for the money shot.

Instructed to ‘look powerful’ by the photographer, I puffed out my chest, lifted my head slightly and stared at the lens, doing my best not to grimace.

A satisfied nod from the photographer.

My work was done.

So what did I learn? Apart from how difficult it is to change into a ball gown inside a cramped gents’ cubicle… 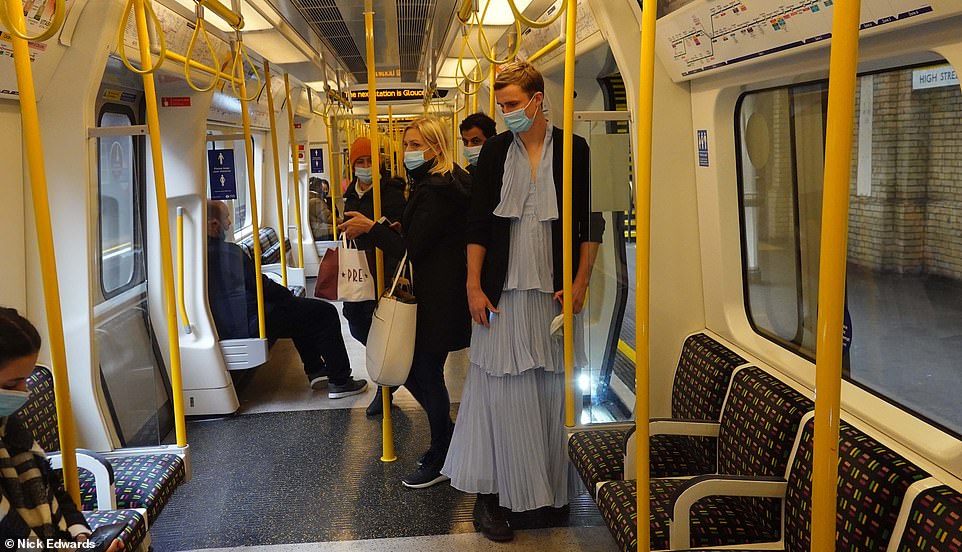 Rory is pictured on the underground wearing his tiered blue dress with a blazer and face mask, most people on the tube didn’t give him a second look 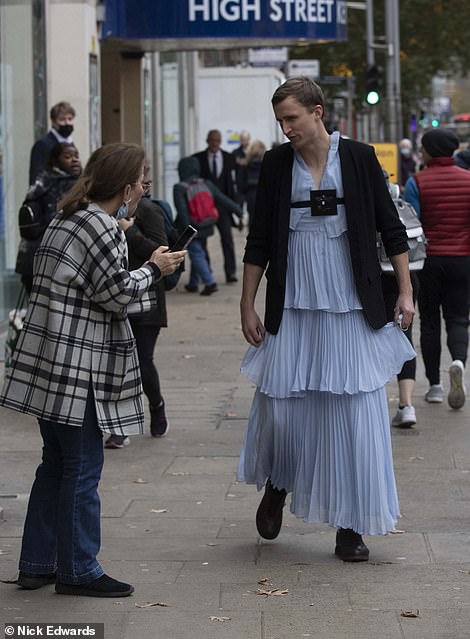 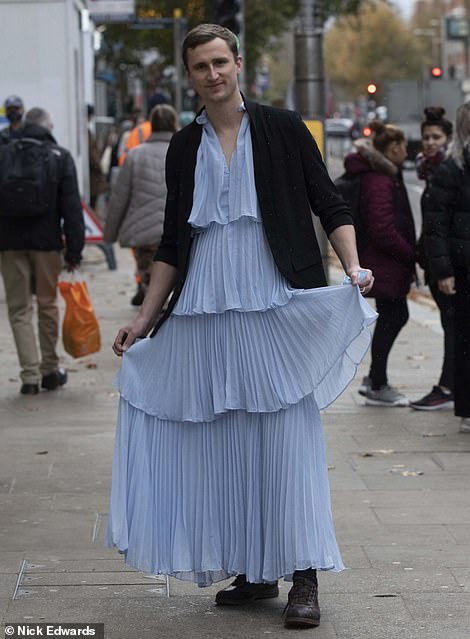 A passerby stopped Rory to ask if she could take a photo, but on the whole most people didn’t bat an eyelid at his blue dress 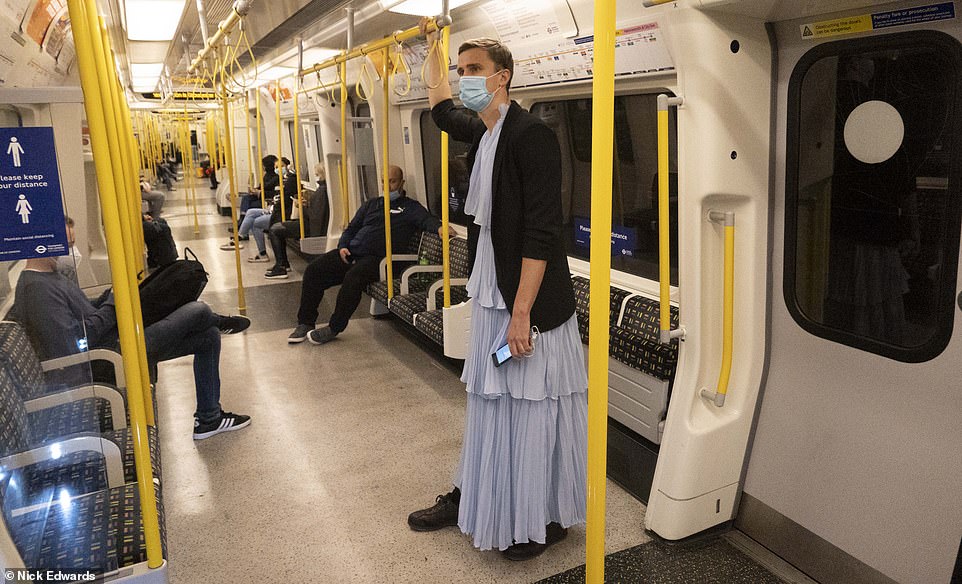 Arriving at Gloucester Road Station, Rory was asked if he was wearing his ‘normal clothes’ by an elderly man, who rolled his eyes

Firstly, that while Candace Owens and Ben Shapiro might be outraged about men wearing dresses, most people really aren’t bothered.

Yes, one man rolled his eyes, but otherwise the reaction ranged from mild amusement and playful banter to complete indifference.

Other people were just intrigued and asked me what was going on.

No surprises there – this is 2020 and we are in liberal London. 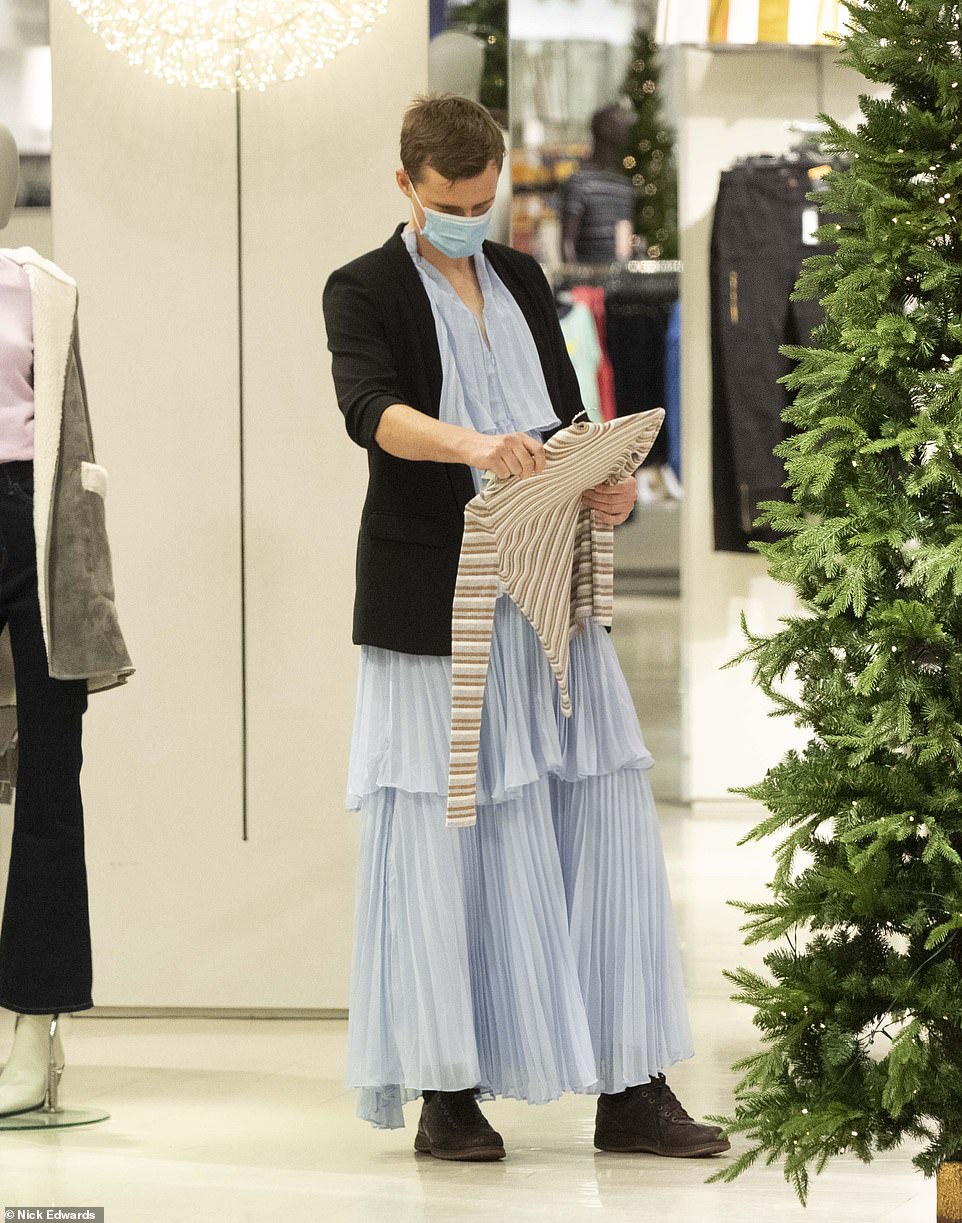 Shopping in M&S: Rory checks out the womenswear section while braving the shops in a blue pleated dress. He then treated himself to a coffee 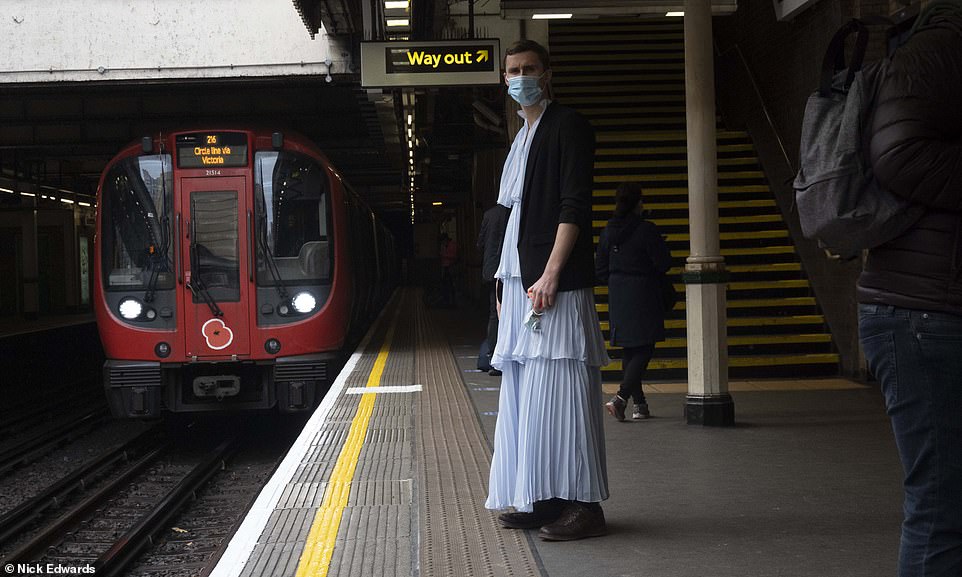 The only marginal hostility Rory experienced was from a passenger at High Street Kensington station, who didn’t seem to approve of his blue dress, others either commented on how great he looked, or even asked for his hand in marriage 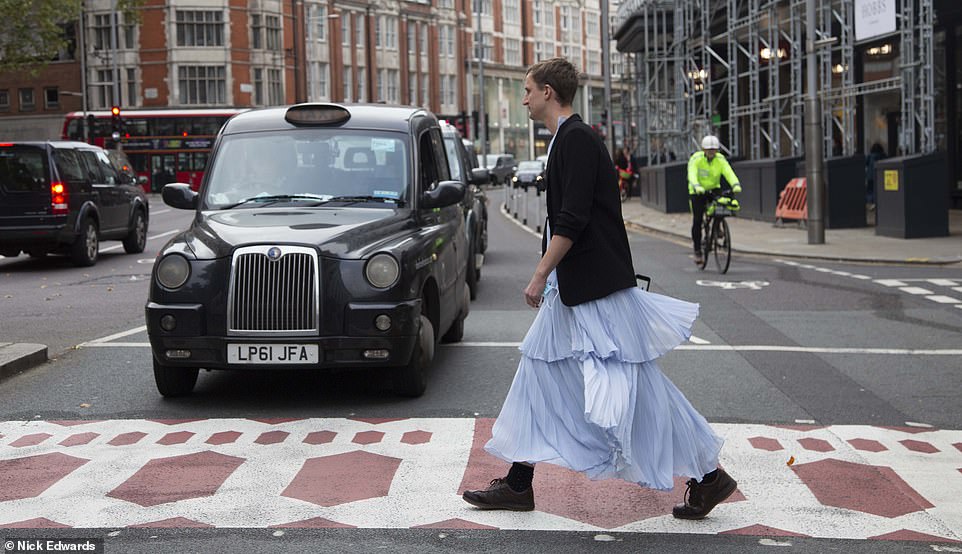 Despite the warnings of Candice Owens et al, Rory said he emerged from the experiment with his sense of manhood intact 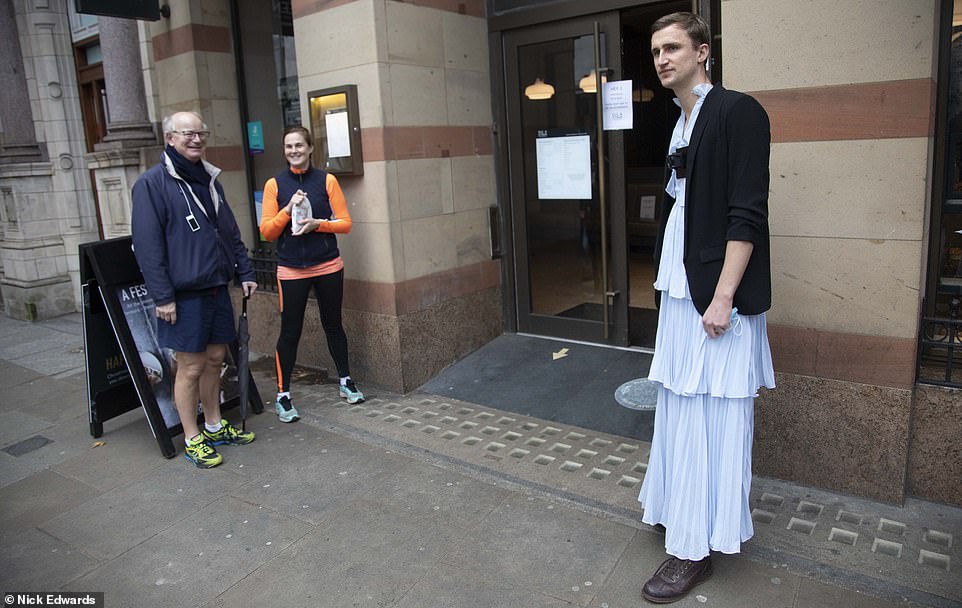 People did not seem to mind Rory’s get up, even if dress on men have left some critics up in arms, with Rory able to wonder around London without a qualm

And of course, men wearing women’s clothes isn’t exactly that revolutionary – who could forget the stunning Mandy (played by Terry Jones) in Monty Python’s Life of Brian. ‘He’s not the messiah, he’s a very naughty boy!’

What about me… could dressing up as a pound-shop Styles be the start of something greater?

I might not have felt a sudden surge of elation or power, and yes, it was a pretty bizarre and sometimes awkward experience. No finding a new ‘me’ then.

Did I feel as manly as I would in my normal outfit? Well, no, but I suspect that’s not the point.

There are probably more reliable ways to demonstrate your masculinity than dressing up in a flowing, three-tier ball gown.

I certainly didn’t feel weak or ‘unstable’ as Owens suggests cross-dressers tend to be.

That said, I’ll be sticking with a shirt and chinos for now… 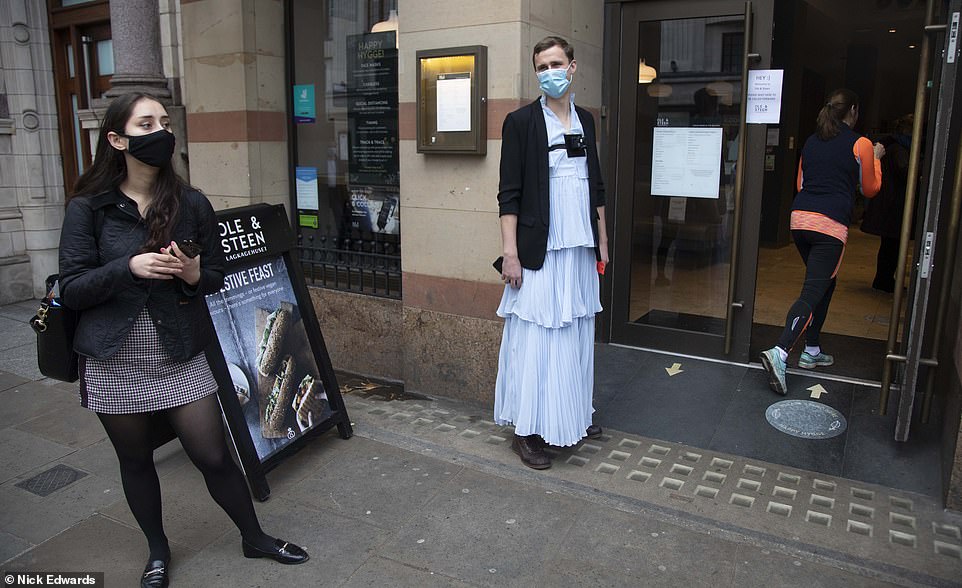 Queuing for a cuppa. Some people averted their eyes from Rory as he was waiting patiently outside of a shop for get a coffee under lockdown rules 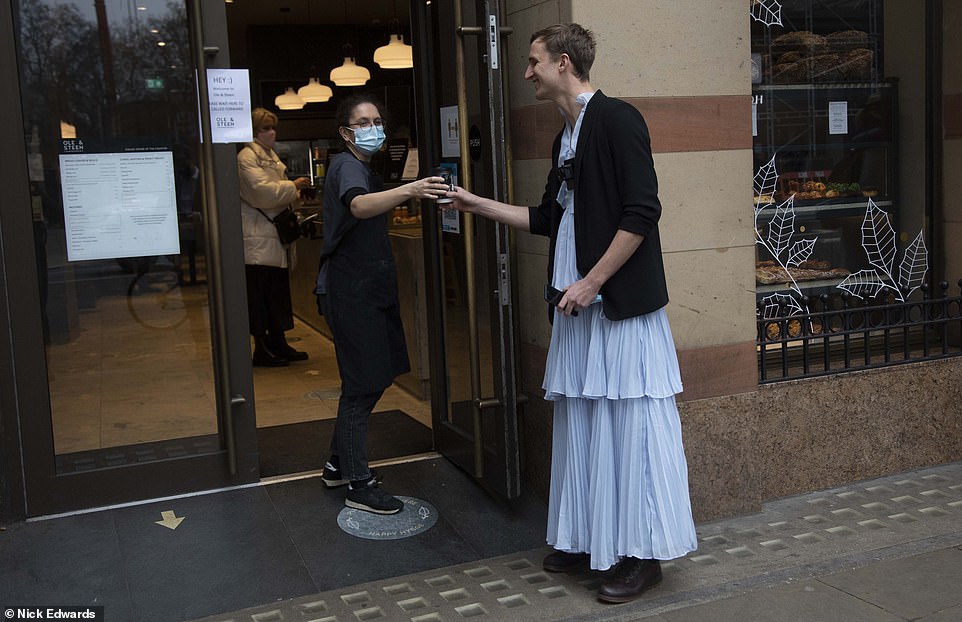 Taking it all in. Rory was not refused service at the local coffee shop during his dress experiment 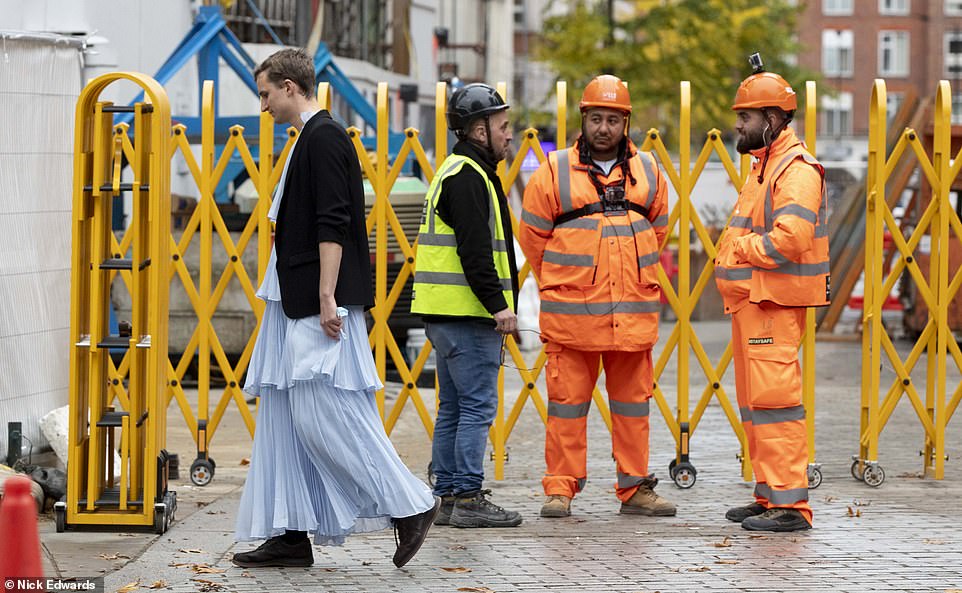 Two takes of masculinity. Rory stood tall in his dress while passing some builders around Kensington 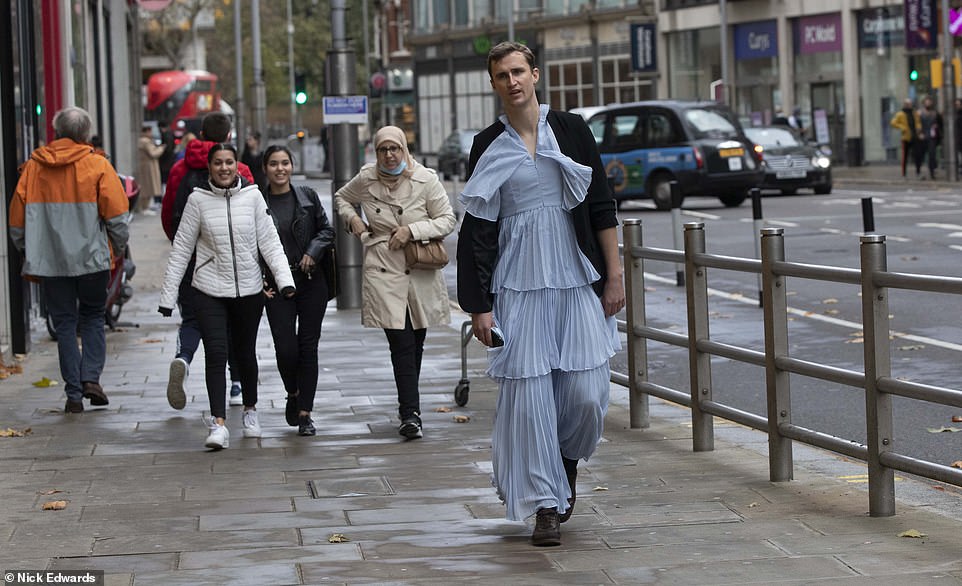 Standing out in a crowd. Passers-by were amused and intrigued by Rory’s outfit, with some sneakily reaching for their phones 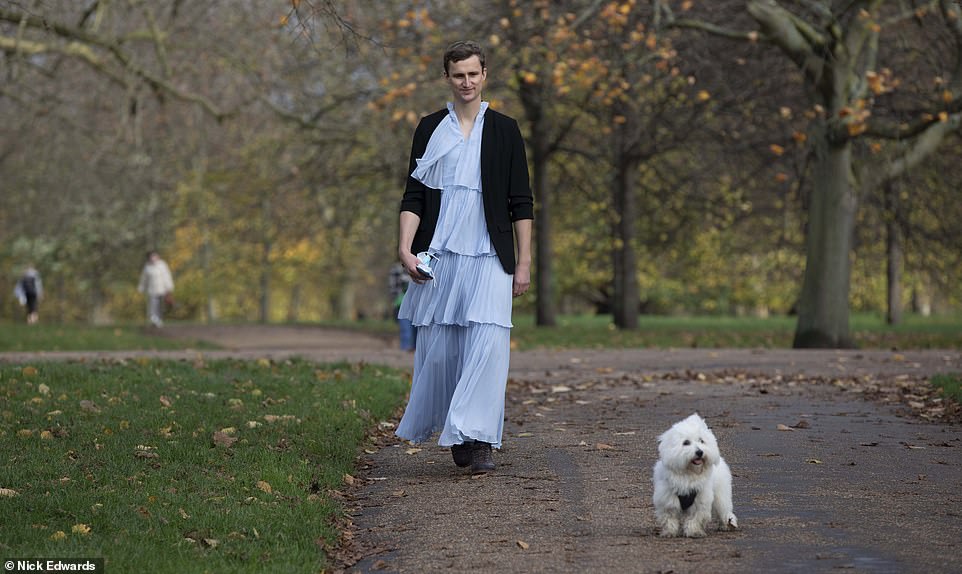 The verdict is out: dogs have no problem with men wearing dresses out in the park 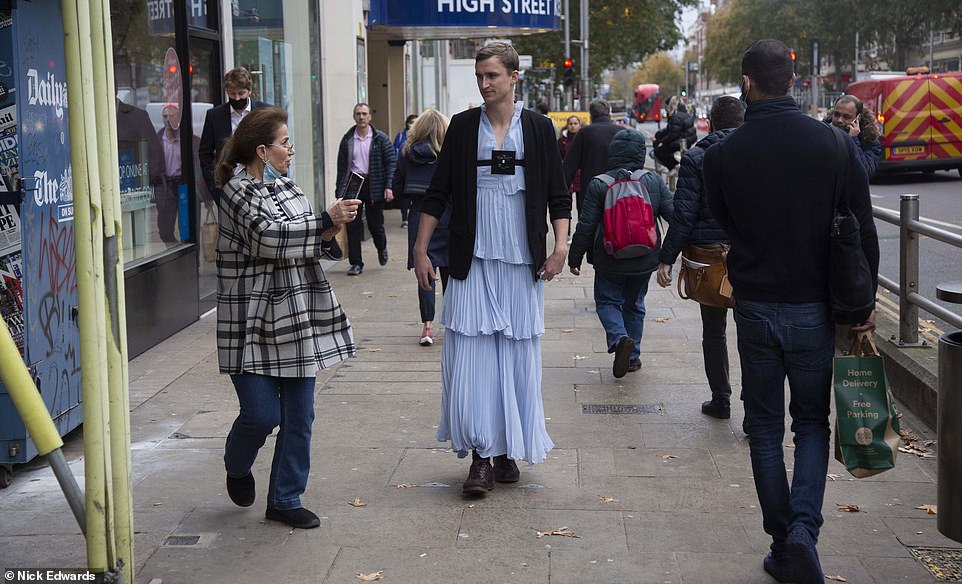 One for the ‘gram! A brave woman chased after Rory to snap his picture, which he gallantly accepted 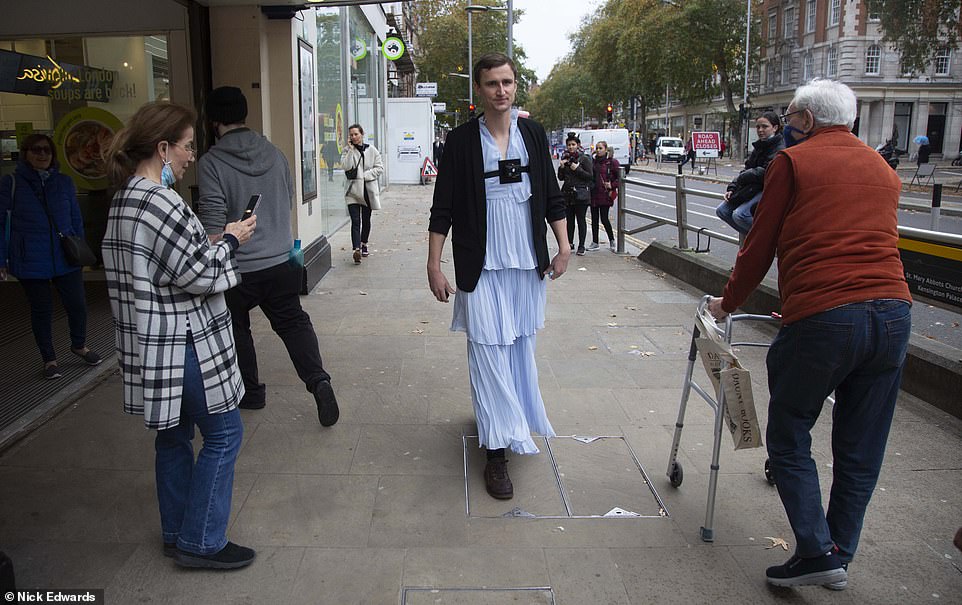 As one woman took a picture of Rory, another am took a good look at Rory’s dress as he walked past 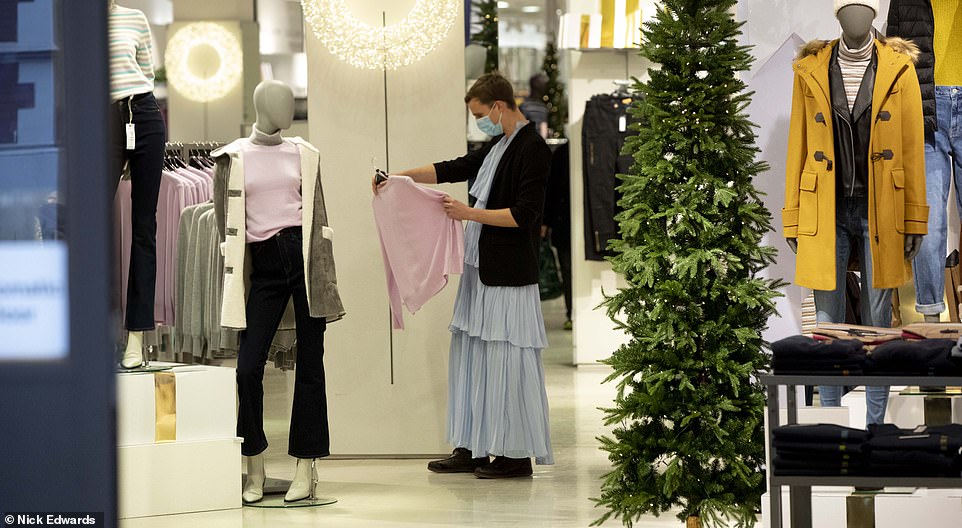 Just browsing. Is this pink sweater intended to go with another dress? Rory said he would be sticking to his jumpers and chinos for the foreseeable future 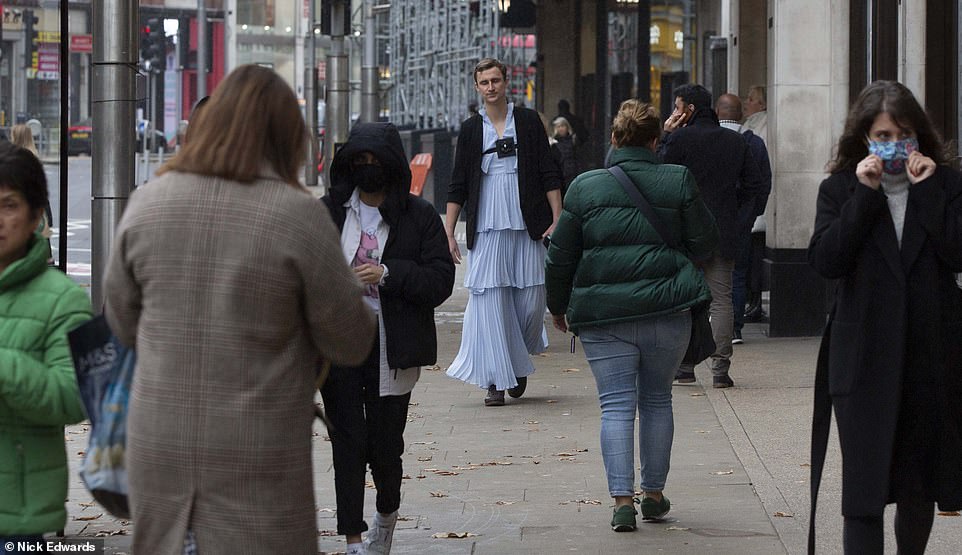 Making a statement on the pavement. Rory held his ground and braved the masses in his dress on the streets of Kensington 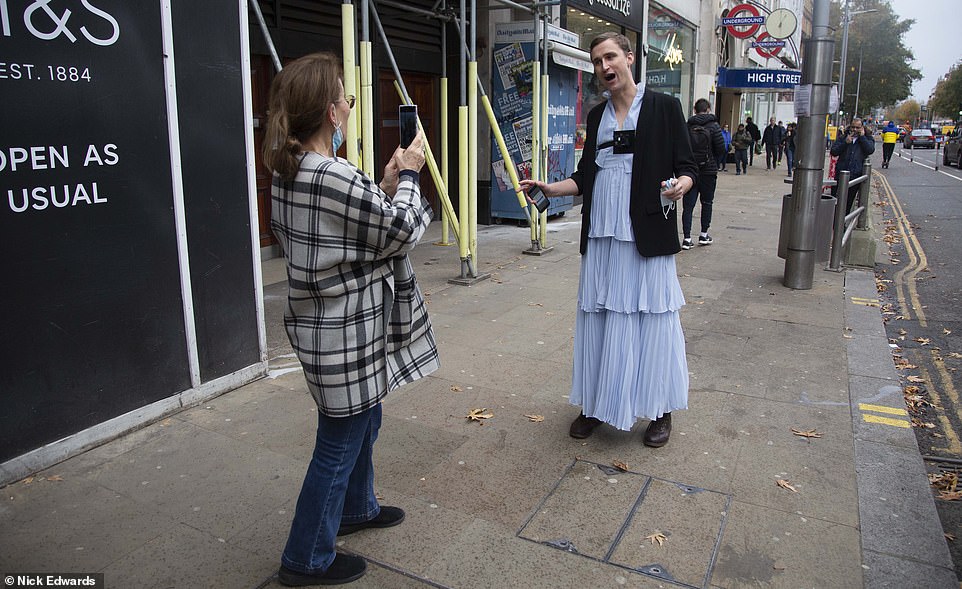 Posing for the fans! Some passers-by stopped Rory in his tracks to request a picture for posterity, giving him the full Harry Styles experience 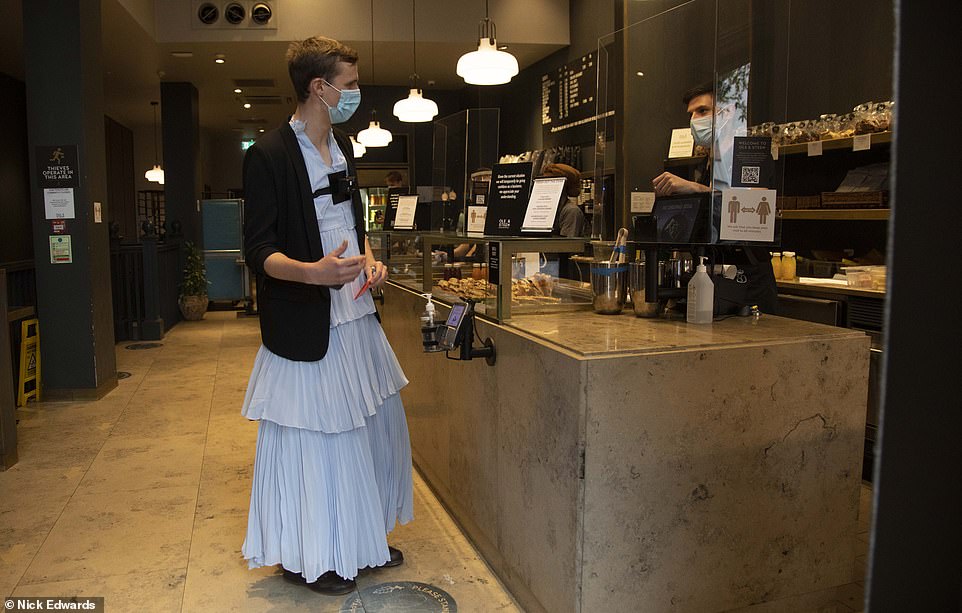 During his venture around Kensington, Rory found he did not feel belittled by the dress, as well as some hot tea