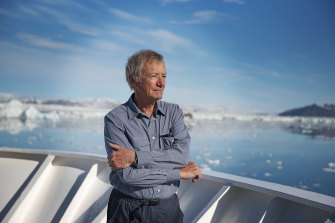 Tony Wheeler, co-founder of Lonely Planet, said he was “shocked” to hear the company was winding down its Australian office. Credit:Max Seigal

"Due to the impact of COVID-19 on demand and sales Lonely Planet has made the difficult decision to reduce its publishing operations for the foreseeable future," a spokesman said.

Lonely Planet will continue publishing its popular country guidebooks and phrasebooks, but will not commission any new titles including coffee table books, children's books and the Lonely Planet magazine.

Founded in Australia in 1973, Lonely Planet grew to become the go-to publisher of travel guides worldwide, with the company's books filling the backpack of millions of tourists.

Tony Wheeler, who founded Lonely Planet with his wife Maureen but is no longer connected to the company, said he was "shocked" when he found out the news.

"Am I sad? Of course, I’m sad about a lot of things. Who knows what's going to happen to the travel industry," he told The Sydney Morning Herald and The Age.

"They are still on the shelves 50 years later which I guess is some source of achievement. Will they be in a year’s time? I don’t know.

Mr Wheeler, a part-owner of Text Publishing, said he was particularly surprised Lonely Planet was shrinking its operations because the industry had actually seen strong demand during the recent lockdown.

"It seems to be a little bit jumping the gun," he said.

"Book sales are a bit like toilet paper – people are hoarding them, buying them while they’re locked down."

The Lonely Planet spokesman would not say how many staff were affected, but a source with knowledge of the redundancies said up to 80 people would lose their jobs in Australia, with the office based in Melbourne.

The business was founded by the Wheelers who travelled from the UK through Europe and Asia before arriving in Australia in 1972 where they published Across Asia on The Cheap the following year.

BBC Worldwide purchased a 75 per cent stake in Lonely Planet in 2007 before acquiring the remaining share in 2011. The business is now owned by US company NC2 Media.

In 2014 the Wheelers received Queen's birthday honours for "distinguished service to business and commerce as a publisher of travel guides, and as a benefactor to a range of Australian arts and aid organisations".

Staff at the travel publisher were told the news on Wednesday. Those laid off will be paid out their entitlements after the consultation process has ended.

One former employee was unsurprised about the company's demise, saying "it's been a shitshow for a long time now".