Finally some alone time! Lady Kitty Spencer is stylish in a £3,400 D&G ensemble as she honeymoons with husband Michael Lewis on the Amalfi Coast after a bumper wedding weekend

After a bumper wedding weekend, Lady Kitty Spencer and her new husband Michael Lewis have retreated to the Amalfi Coast to kick off their honeymoon.

Princess Diana’s niece, 30, and millionaire retail tycoon Michael, 62, arrived at a five-star hotel in Positano yesterday, bringing to an end their four-day extravaganza.

Friends and family including singer Pixie Lott, aristocrat Emma Weymouth and Kitty’s sisters, brothers and mother jetted into Rome to celebrate the happy couple across four days of events that started with a rehearsal dinner and took in a fireworks display, a lavish day-after lunch and an intimate dinner.

One expert put the cost of the wedding – including Kitty’s five custom Dolce & Gabbana gowns – in excess of £1million.

Now the couple will no doubt be looking forward to some quality alone time on honeymoon as they embark on their journey as husband and wife.

Michael and Kitty, the eldest daughter of Earl Spencer and his wife Victoria Aitken, arrived at their hotel by car and looked relaxed as they strolled to their clifftop hotel along a charming walkway. 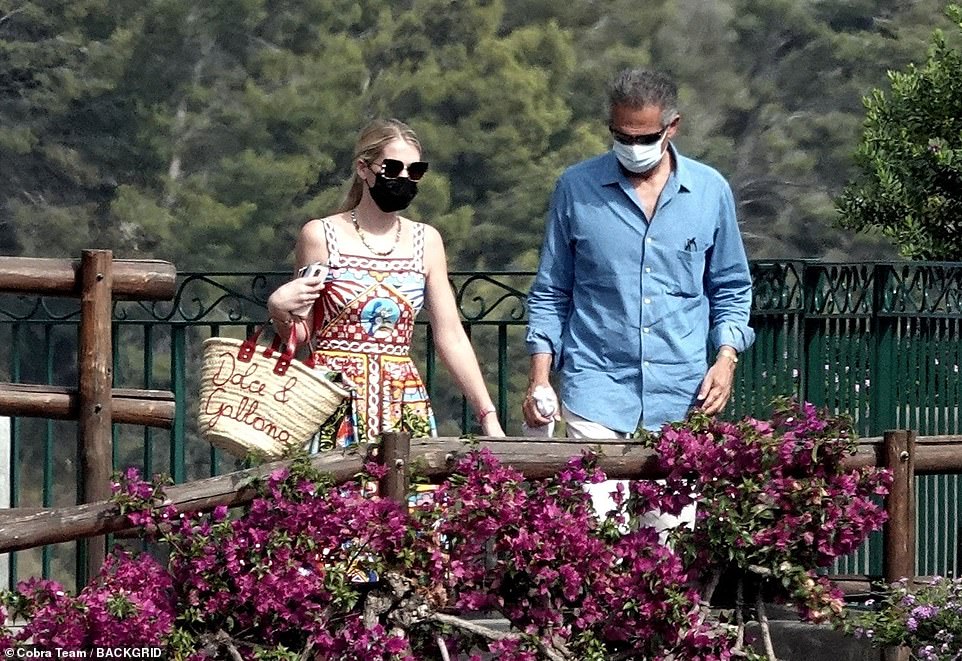 Strolling into married life: Lady Kitty Spencer and husband Michael Lewis arrived on the Amalfi Coast for their honeymoon 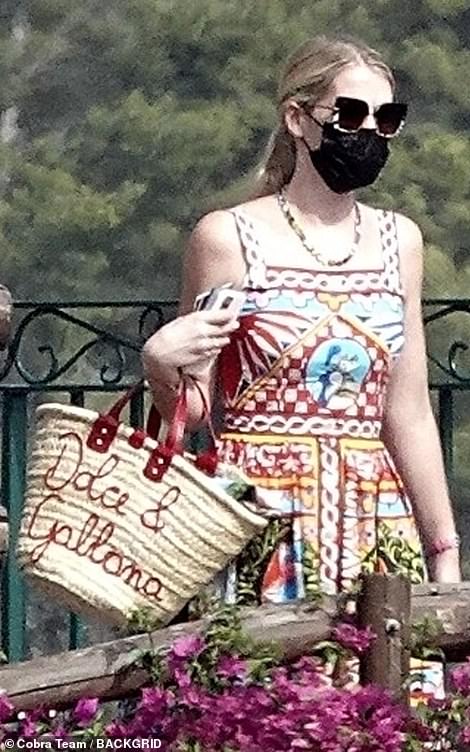 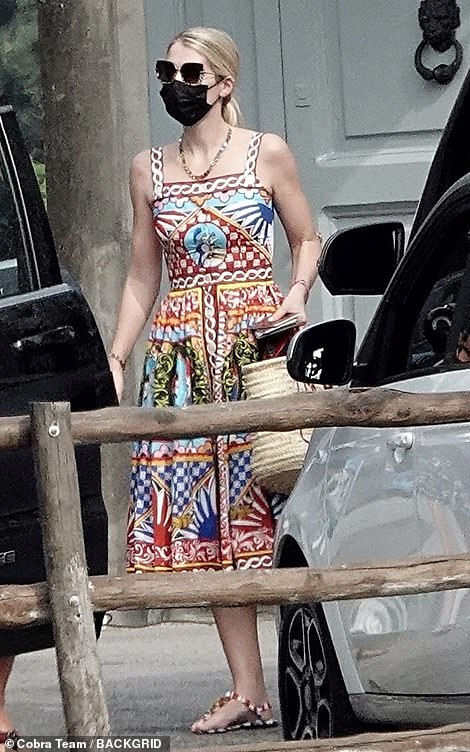 Lady in red: D&G global ambassador Kitty dressed head-to-toe in the brand, with the outfit costing £3,500 in total 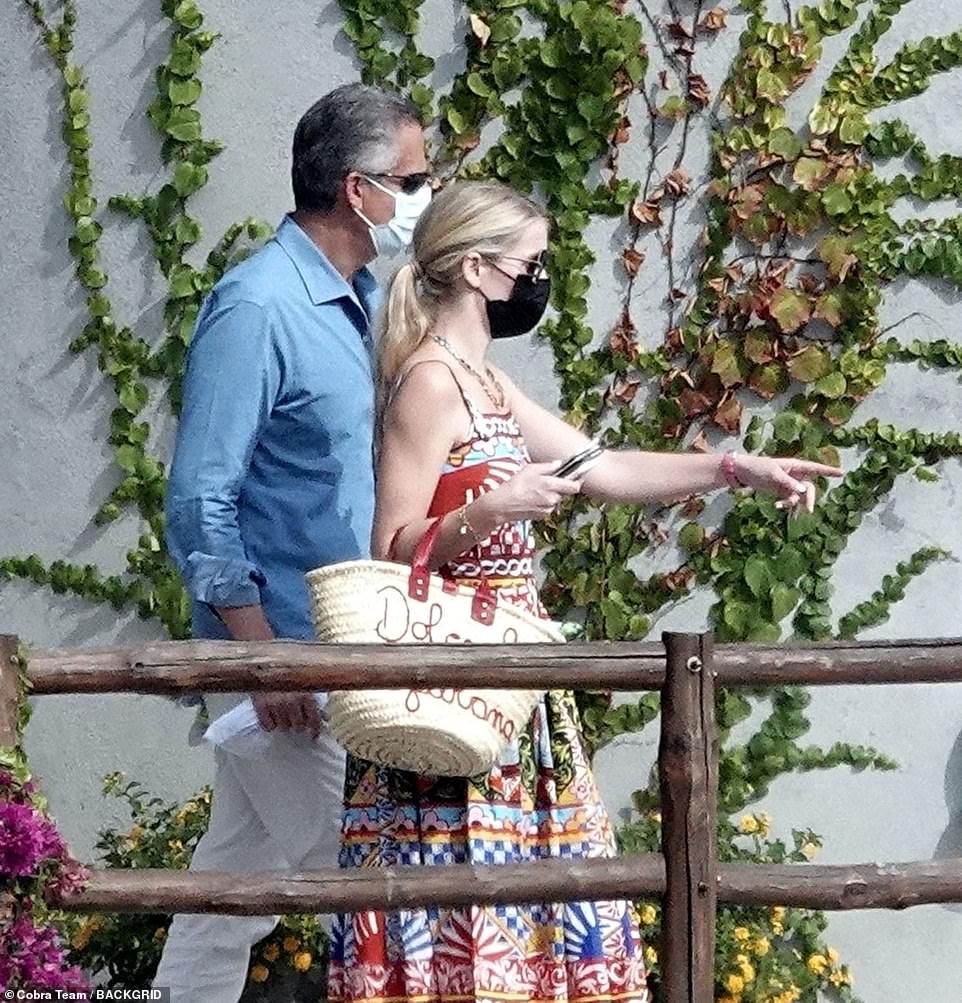 Newlywedded bliss! Michael and Kitty chatted as they made their way from the car to their hotel on the idyllic Amalfi Coast 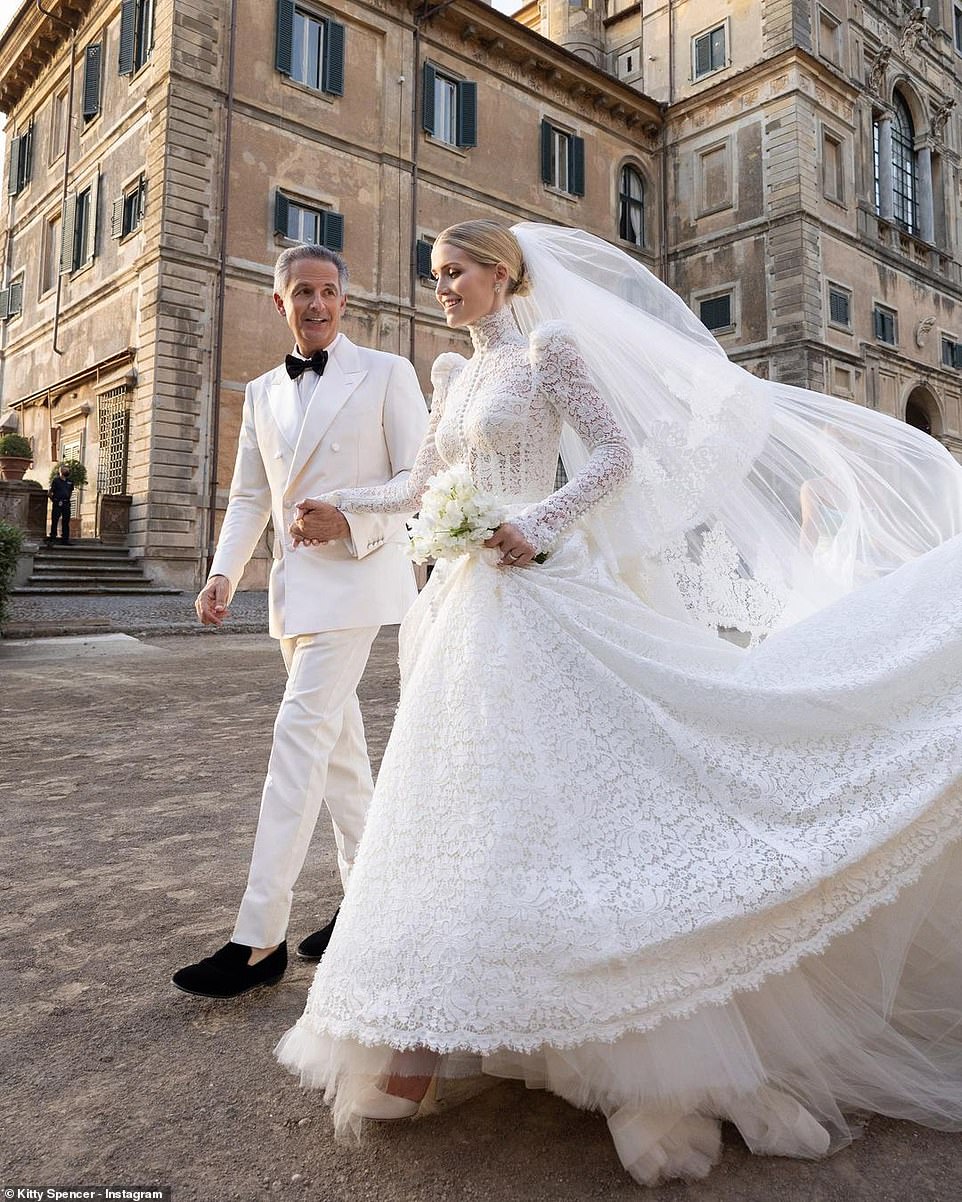 The big day: The couple tied the knot on Saturday at a £20,000-a-day 12th century castle on the outskirts of Rome

The couple arrived this morning in Positano, the stylish enclave loved by celebs and well-heeled holidaymakers. The coastal village is a three-and-a-half hour drive south of Rome.

Model Kitty, who has landed a contract as D&G’s global ambassador, looked elegant yet relaxed in a £1,500 printed cotton-poplin D&G midi dress as she and Michael arrived at a five-star hotel in the coastal village.

Showcasing her commitment to the label, she accessorised with a £975 embroidered D&G straw beach bag and finished the look with £925 D&G sandals.

Kitty wore her blonde hair pulled back into a ponytail and added a pair of oversized shades. While leaving the taxi and entering the hotel, the newlywed wore a black face mask in accordance with local guidelines. 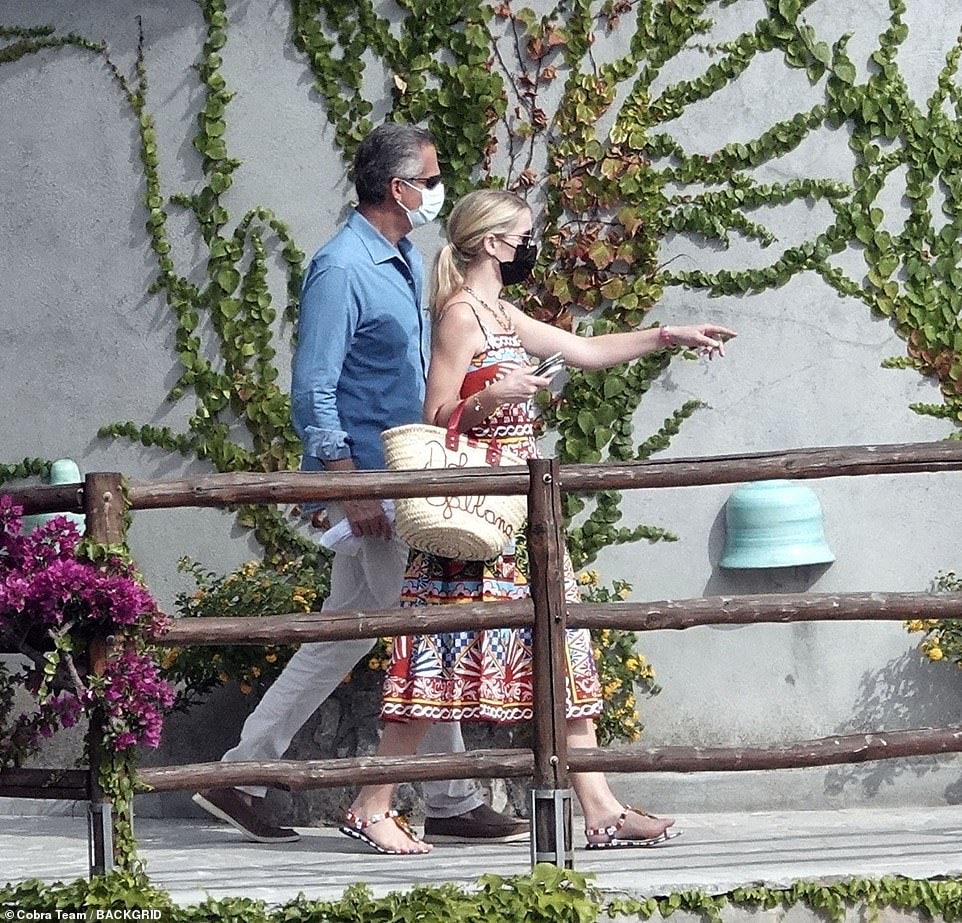 Bright and beautiful: Lady Kitty looked typically stylish in her £1,500 Dolce & Gabbana dress and shoes from the label 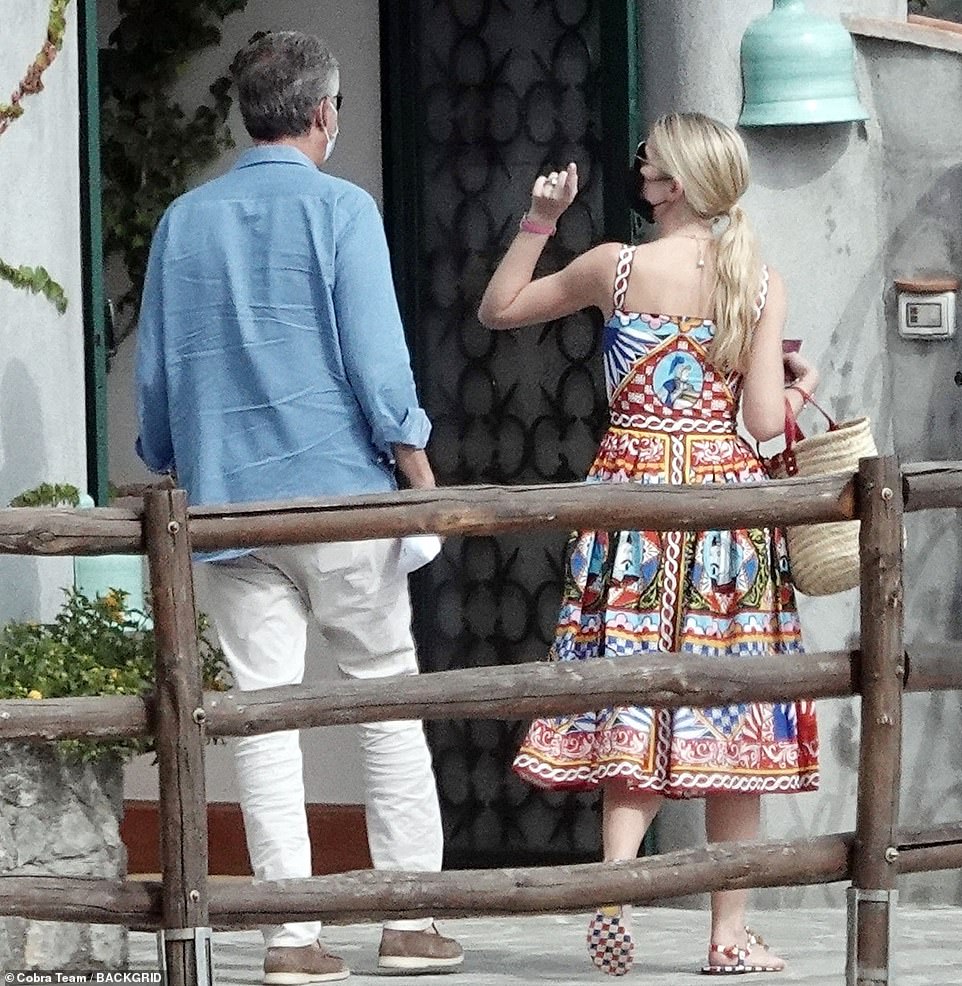 Local architecture: Kitty appeared to admire the Italian hotel as she and husband Michael made their way inside 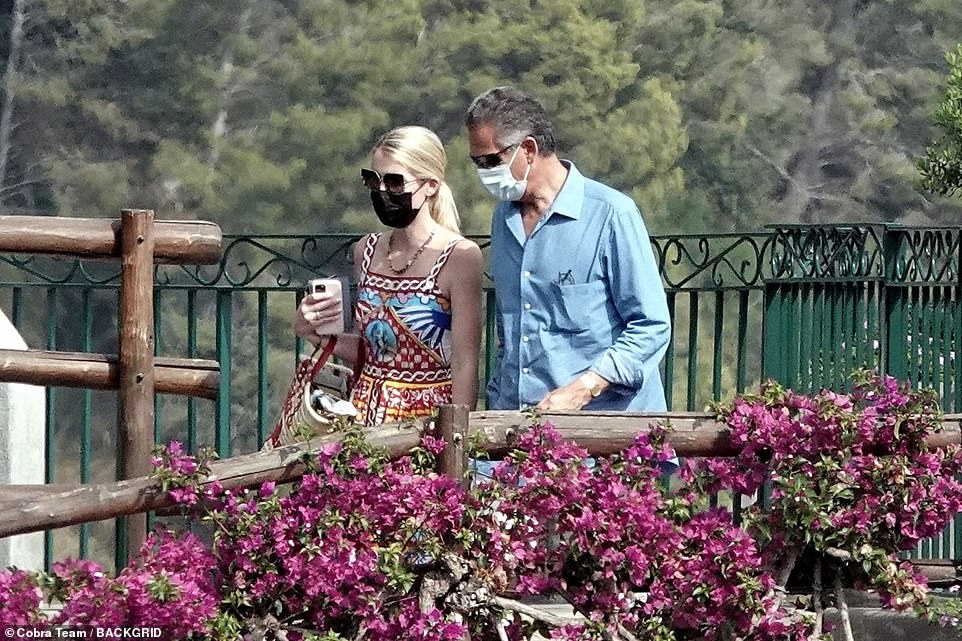 Holidaying as husband and wife: Kitty and Michael will no doubt be looking forward to relaxing after a busy weekend 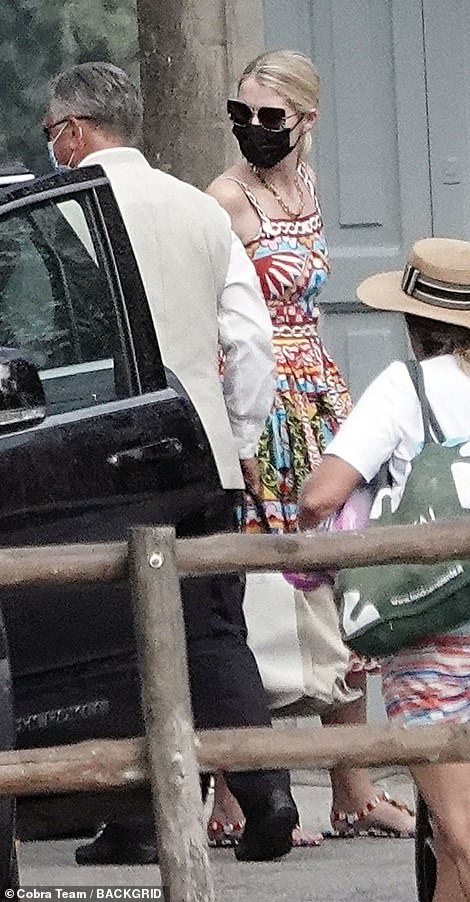 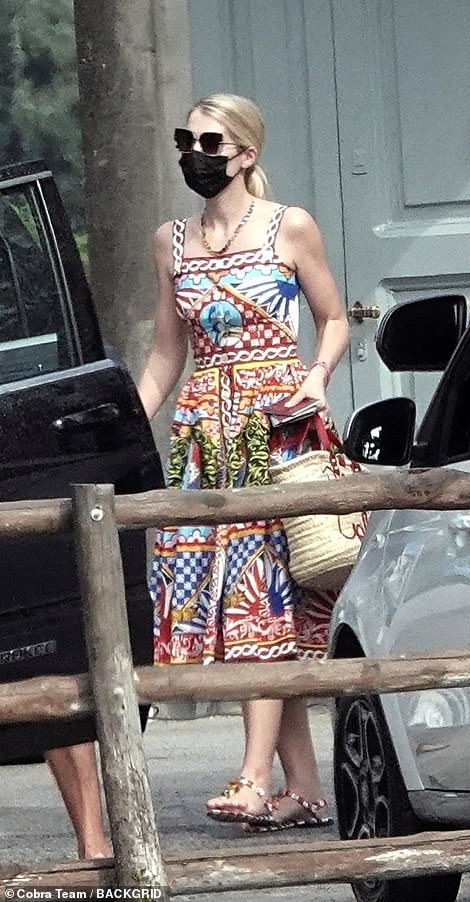 Cover girl! Kitty wore her blonde hair pulled back into a ponytail and added a pair of oversized shades. While leaving the taxi and entering the hotel, the newlywed wore a black face mask in accordance with local guidelines 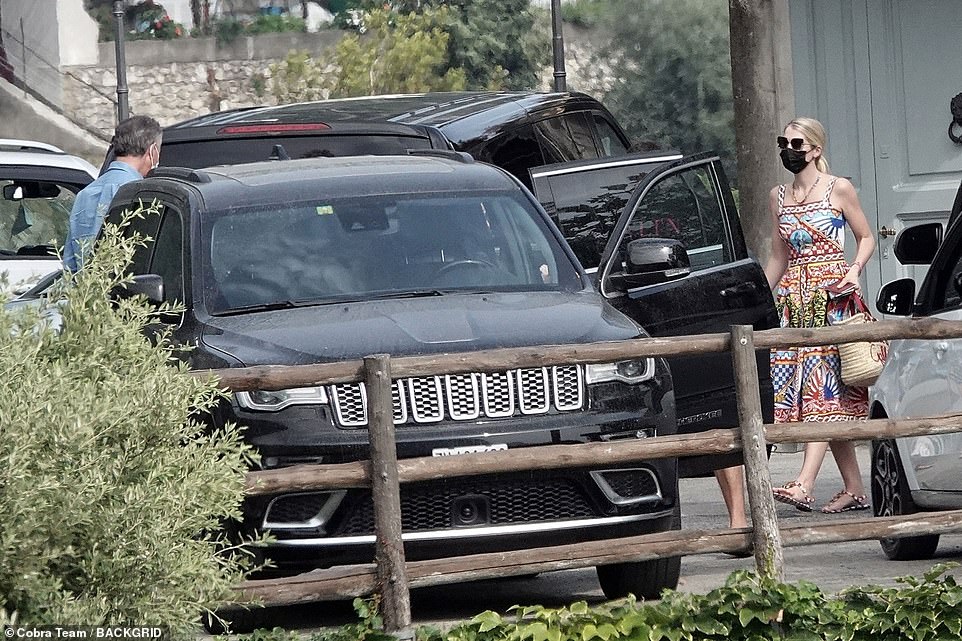 We’ve arrived! The couple arrived this morning in Positano, the stylish enclave loved by celebs and well-heeled holidaymakers. The coastal village is a three-and-a-half hour drive south of Rome 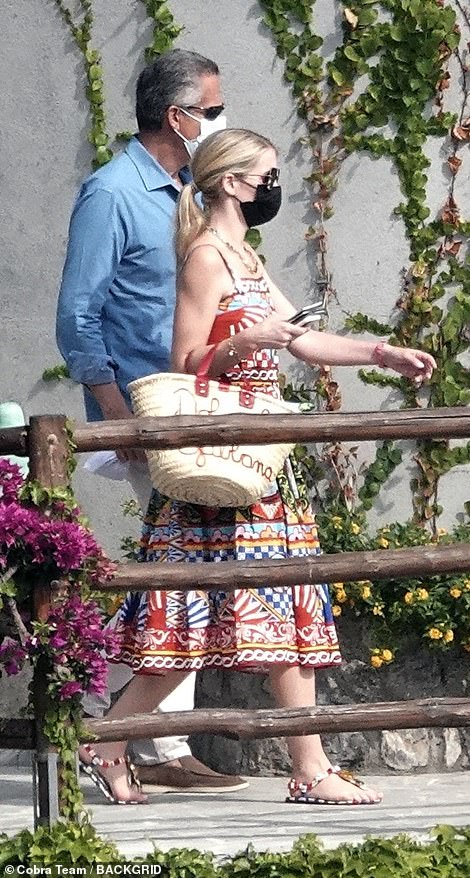 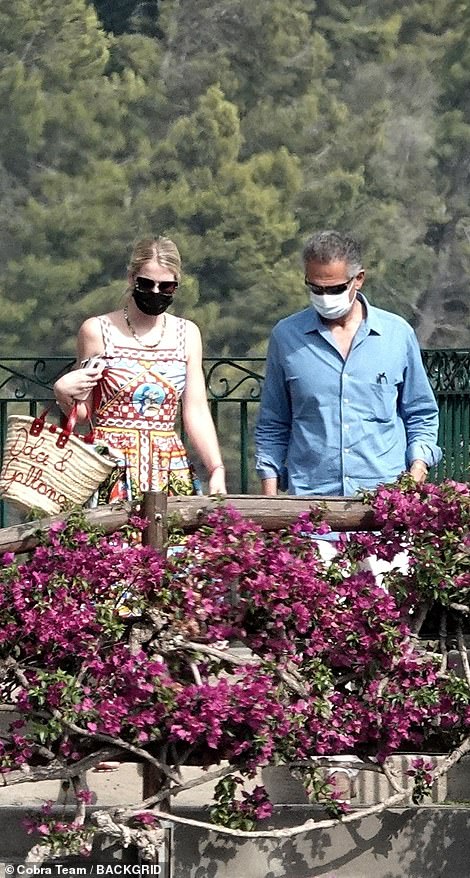 Attention to detail: Showing her commitment to D&G, Kitty finished her outfit with a £975 beach bag by the designer 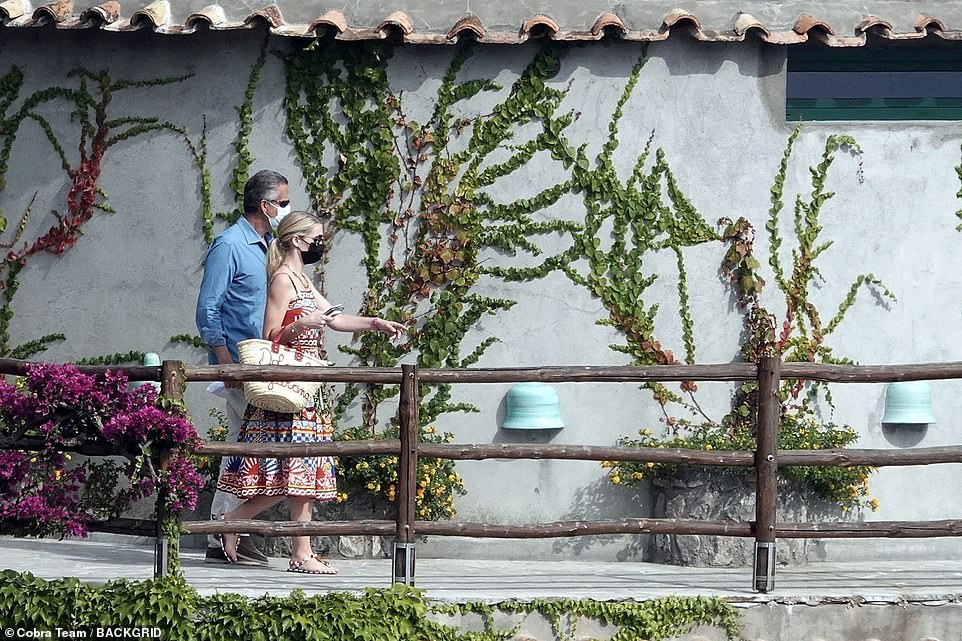 Time to unwind: The couple have spent the last week with friends and family but will now finally have time alone together 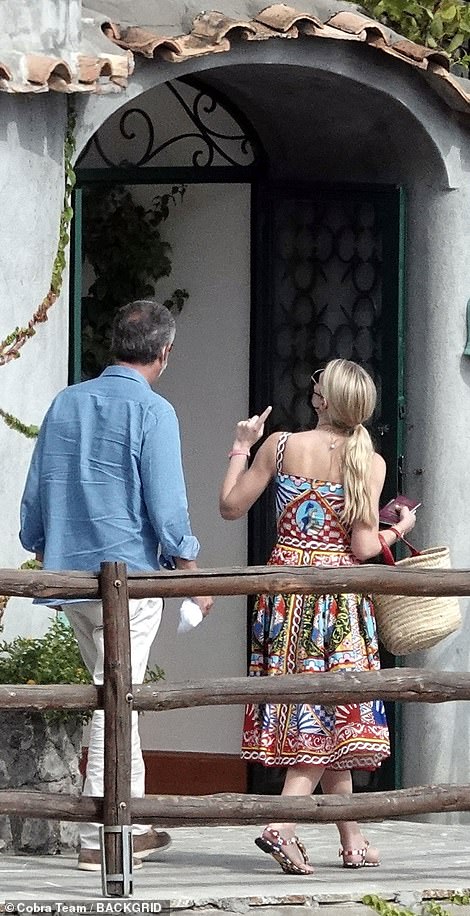 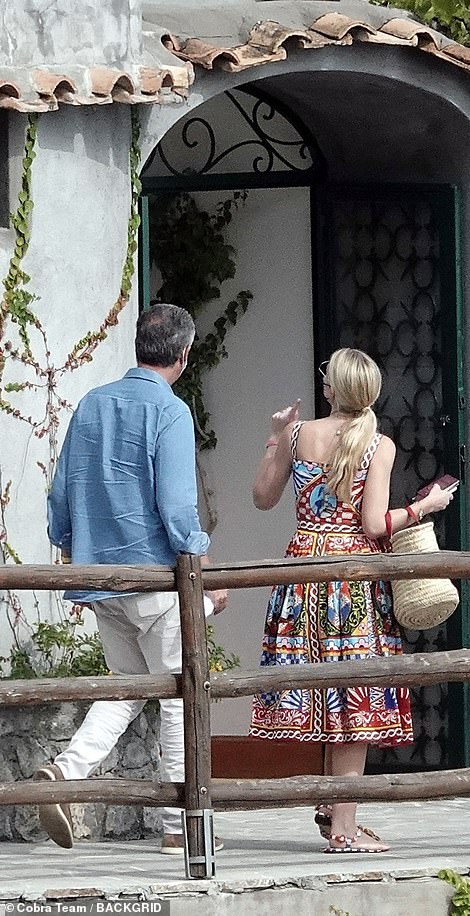 Taking in her surroundings: Lady Kitty appeared to be pointing out something to her husband as they arrived at the hotel 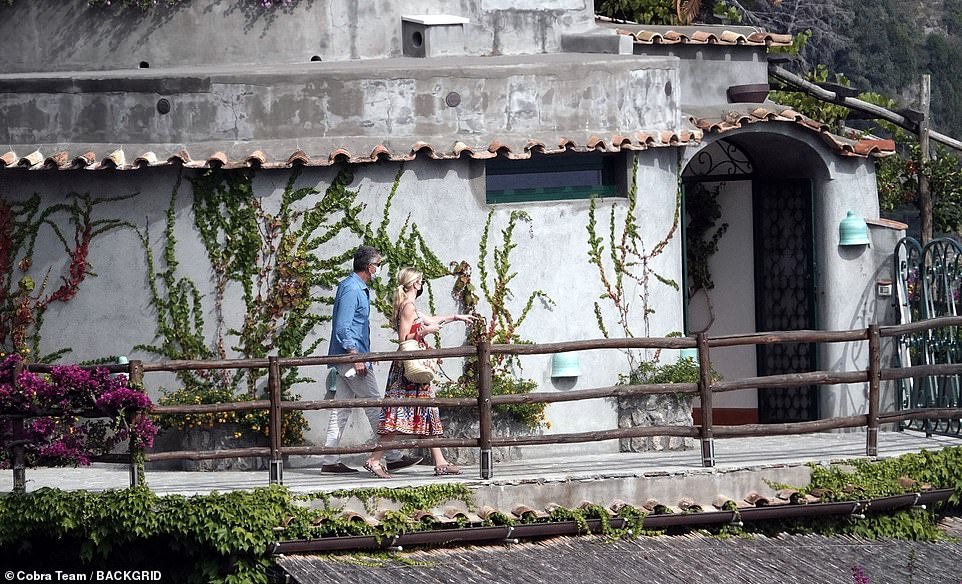 Picturesque: Lady Kitty and Michael are spending time at a historic hotel on the cliffs above the Amalfi Coast

Meanwhile Michael appears to have kept his holiday packing to a capsule wardrobe and stepped out in the same blue shirt, chinos and shoes that he wore to dinner last night.

Former wedding planner to the stars, Kelly Mortimer, who oversaw Katherine Jenkins’ 2014 wedding to Andrew Levitas, said with five bespoke Dolce and Gabbana dresses, four days of events and the hire of an Italian castle, the bride and groom would have ‘easily hit the £1million mark’ when it came to costs for their wedding.

Mortimer, who planned weddings at the likes of Claridges and the Mandarin Oriental in London for well-heeled brides and grooms before launching a business teaching hotels how to host luxury events, told FEMAIL: ‘With a society wedding with celebrities involved, it doesn’t take much to hit the £1million mark.

‘A band for the evening might cost a quarter of that figure, and when you factor in the flowers, meals and venue, you can quickly hit six figures, perhaps even more.’ 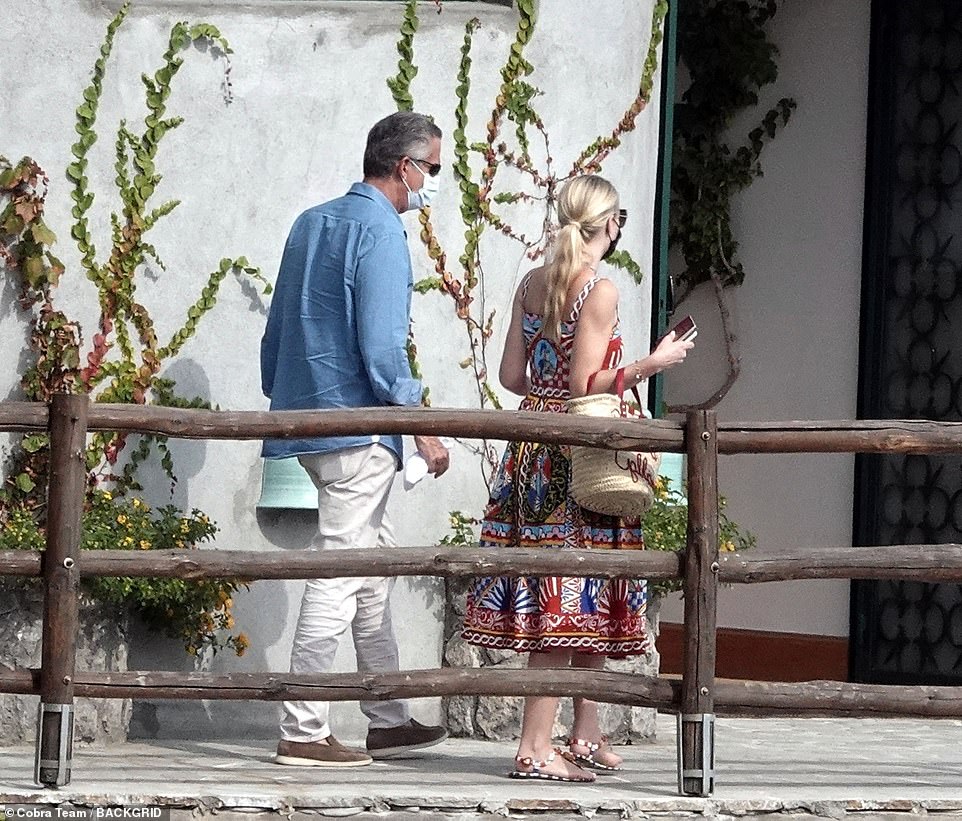 Well-prepared: Newlywed Lady Kitty carried her passport in her hand ahead of checking into the hotel in Positano 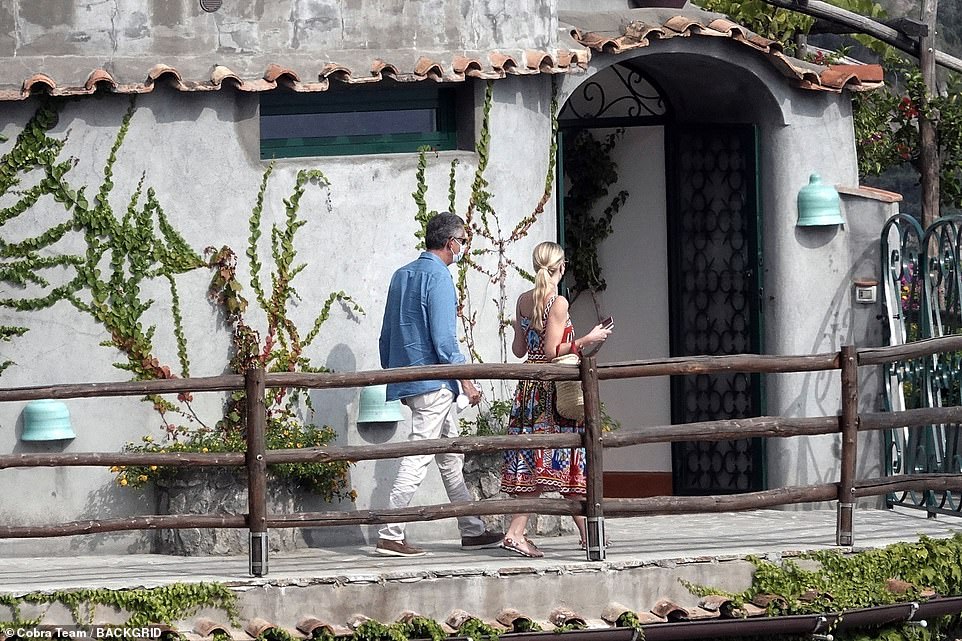 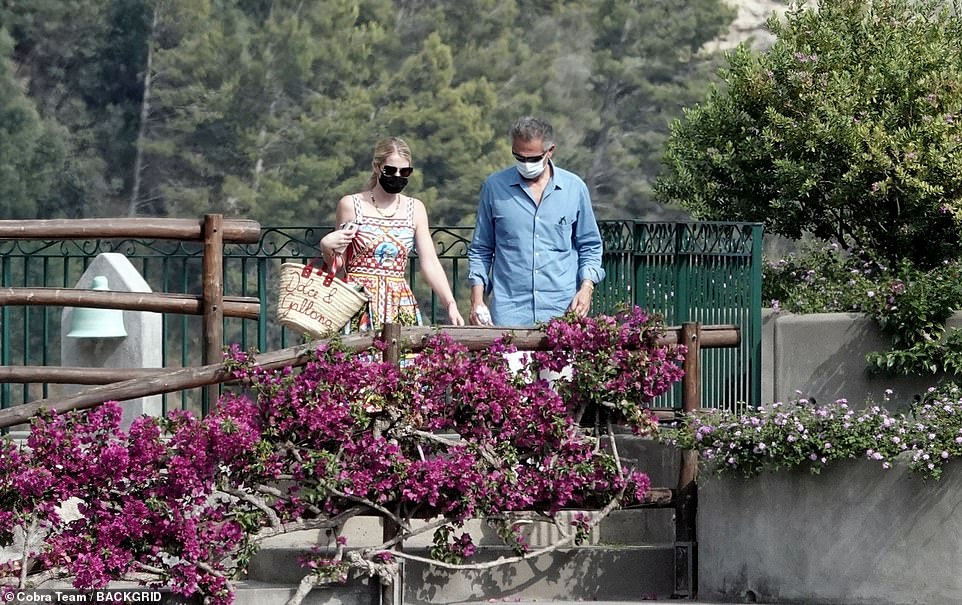 Plenty to talk about: The couple, pictured at the hotel yesterday, will no doubt want to discuss their lavish four-day wedding 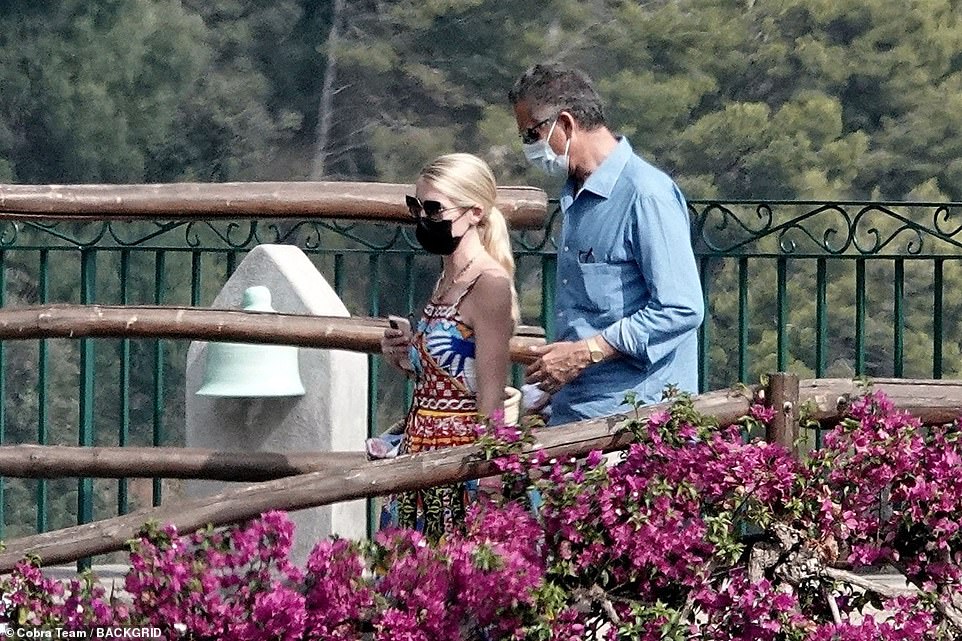 No expense spared: One expert estimated the wedding would have cost £1million – now there is a lavish honeymoon to pay for 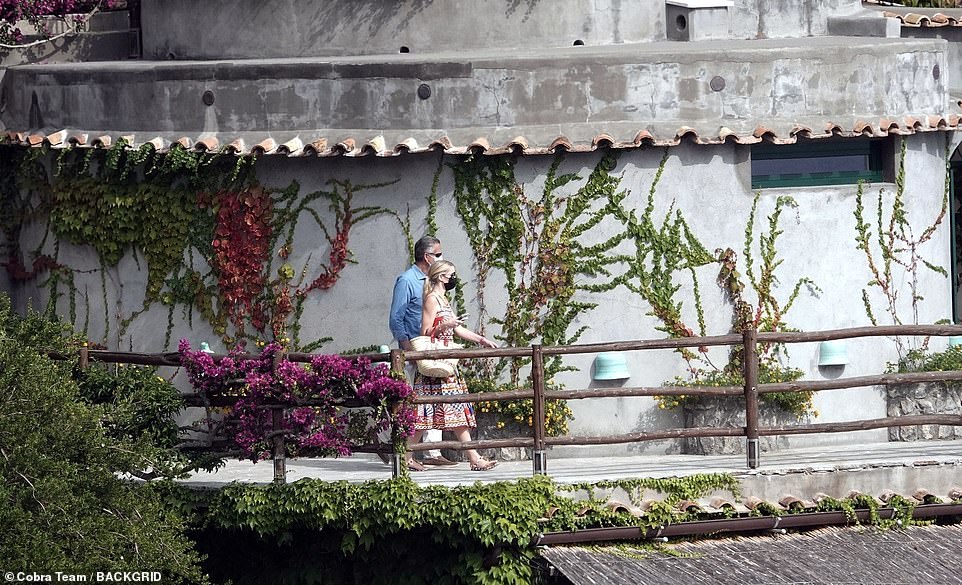 Soaking up the sun: The couple looked perfectly relaxed as they made their way along a walkway to the hotel entrance

After a week-long hen party with friends – which involved nights out in Florence and a visit to a Chianti vineyard – Kitty started her official pre-wedding events with a rehearsal dinner at the Galleria Del Cardinal, a high-end events space in Rome.

Guests dined on a menu including a classic veal and tuna salad, beef broth and pumpkin cream ravioli and baked eggplant.

The wedding took place on Saturday at the £20,000-a-day Villa Aurelia which offers panoramic views of Rome.

On Sunday guests returned for a post-wedding lunch at the property which also served as the venue for the wedding of Meghan Markle’s BFF Misha Nonoo and oil heir Mikey Hess in September 2019.

The fun continued into Monday, with Kitty joining friends including Pixie Lott and Jade Holland Cooper for lunch, before stepping out with her husband and family for dinner. 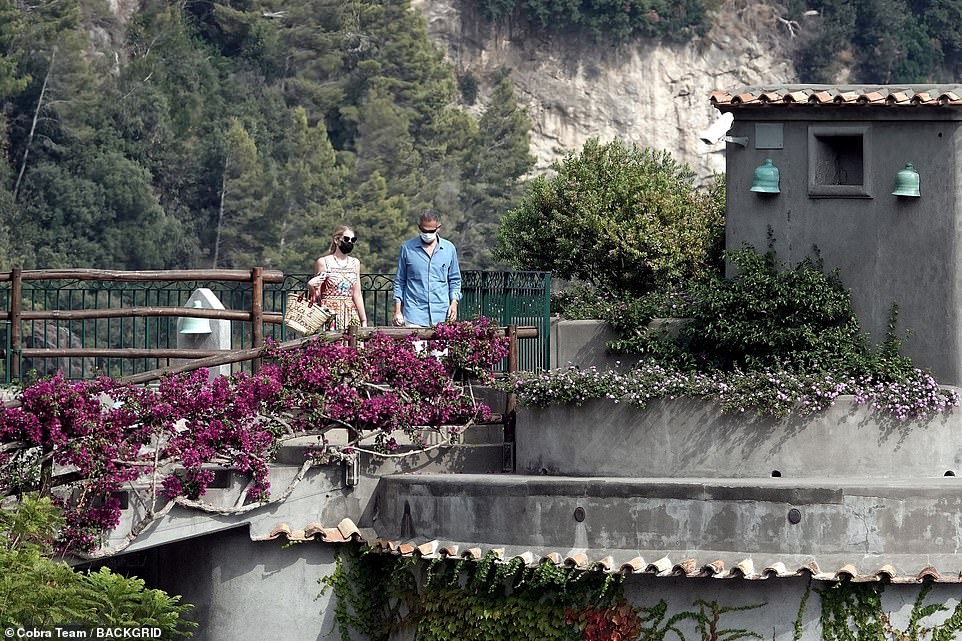 Breathtaking views: The Amalfi Coast is famed for its upmarket eateries and chic hotels like the one above 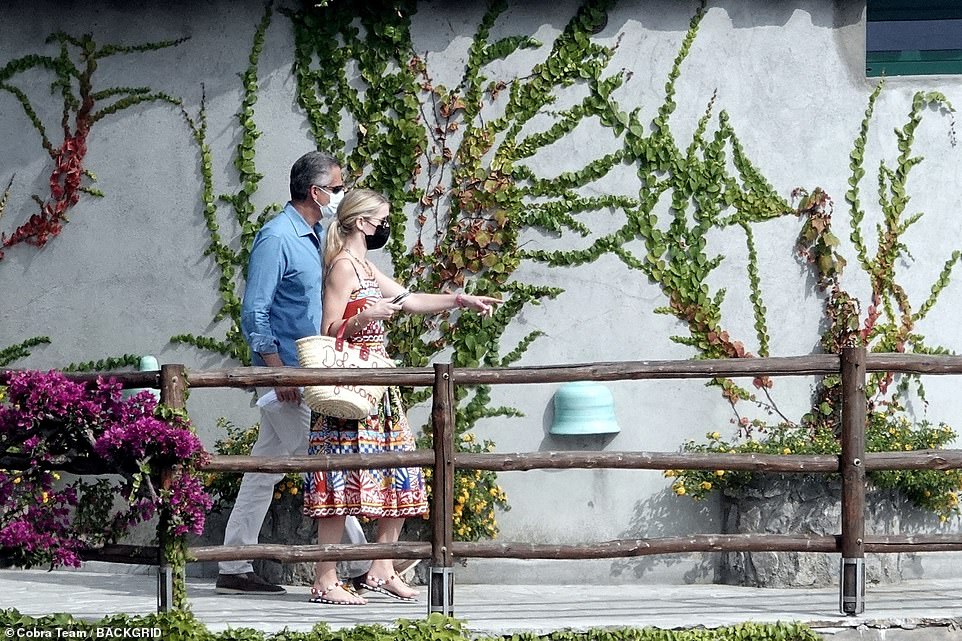 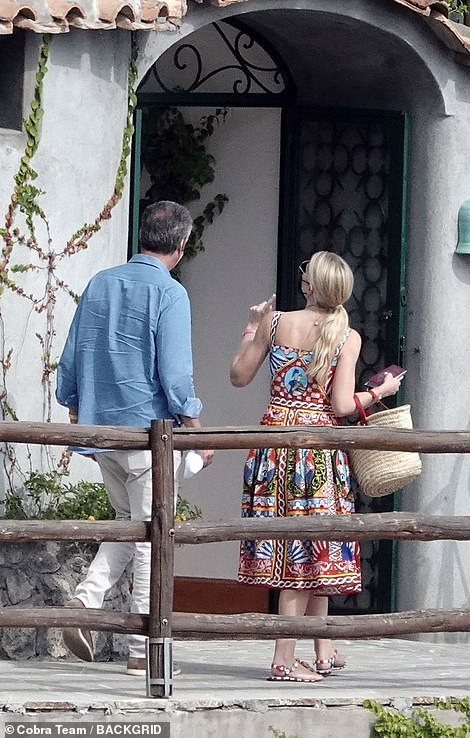 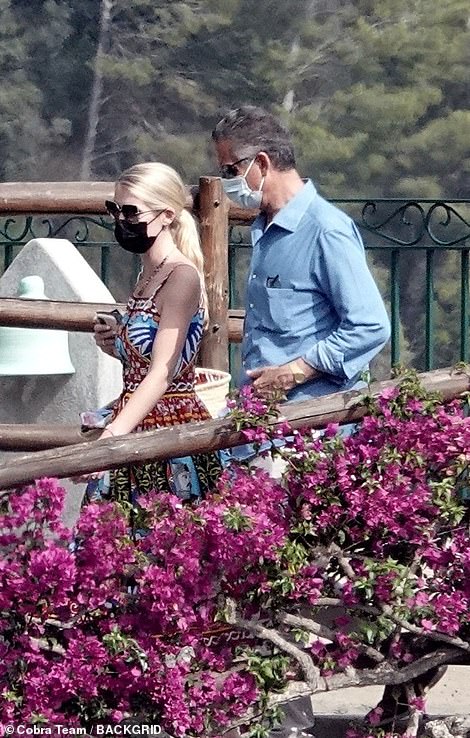 Keeping things casual: Michael Lewis appeared to be wearing the same shirt and trousers he sported for dinner on Monday 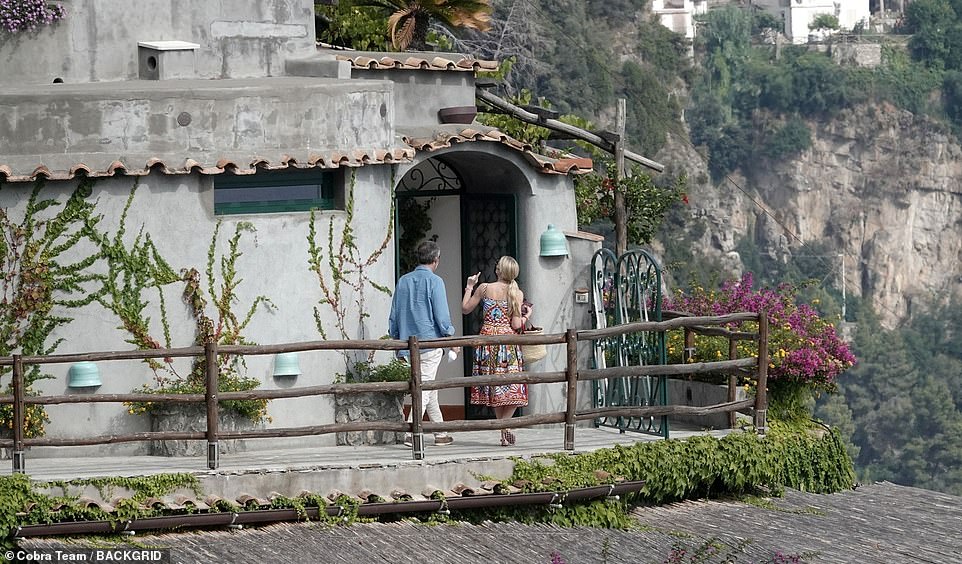 Living la dolce vita: Kitty and Michael arriving at the hotel in Positano, on the Amalfi Coast, on Tuesday 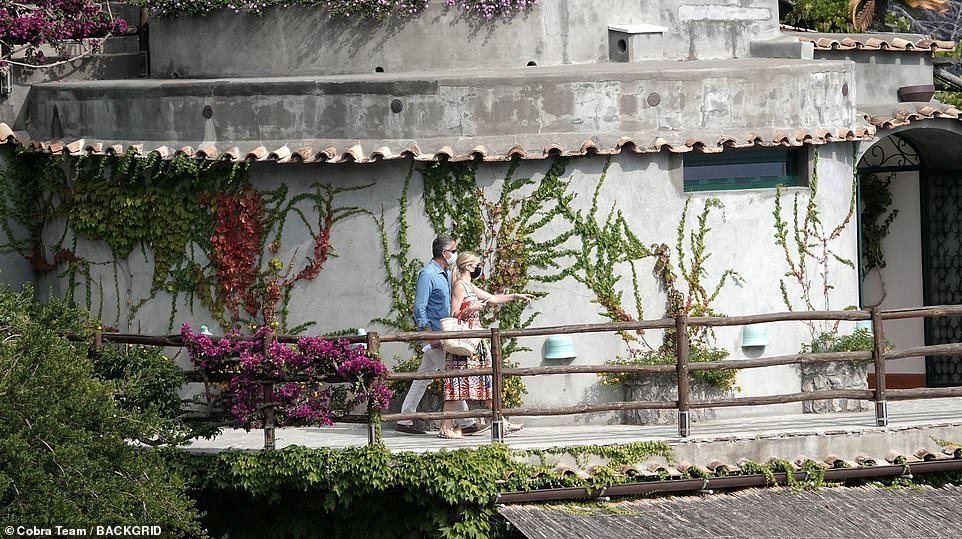 Escaping to the coast: Kitty and Michael are joining other wealthy holidaymakers in the vibrant seaside enclave 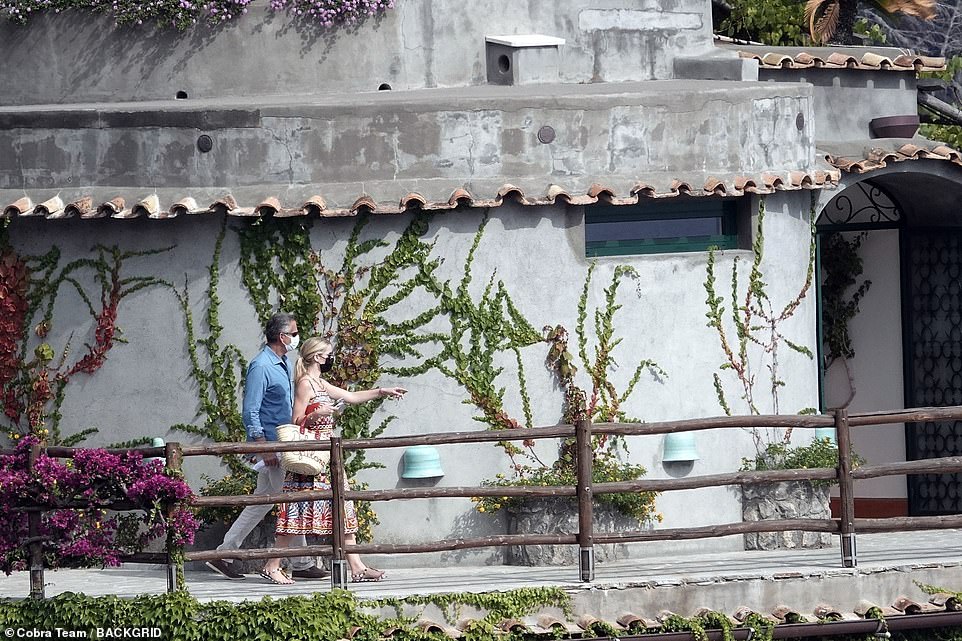 Look at that! Kitty appeared to point something out to her husband as they strolled from their car to the hotel