A political clash on national security could end within days under a Labor offer to pass new federal laws to give police more power to ban aviation workers who fail criminal intelligence checks.

Labor is willing to pass the aviation security measures when they go to the Senate on Tuesday after federal agencies warned this week existing laws were not strong enough to weed out airport workers with links to organised crime. 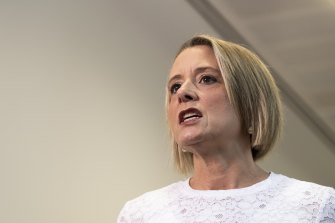 Labor’s home affairs spokeswoman, Kristina Keneally, wrote to the PM on Friday to offer a compromise that could pass the aviation security changes while negotiating a separate bill to cover shipping and ports.Credit:Rhett Wyman

But Labor will hold out against similar changes for workers at Australian ports in a bid to broaden the powers to include foreign shipping crews, claiming there is a “gaping hole” in the government proposal.

Prime Minister Scott Morrison sparked a dispute with Labor on Tuesday by claiming the opposition was holding up three security bills, signalling a political fight at the next election on law and order.

While two of the bills are not being held up by Labor because they are subject to review by a bipartisan committee in Parliament, a third has been in dispute for months over whether it is fair to workers to subject them to sweeping criminal intelligence checks.

Labor’s home affairs spokeswoman, Kristina Keneally, wrote to Mr Morrison on Friday to offer a compromise that could pass the aviation security changes while negotiating a separate bill to cover shipping and ports.

A joint investigation by The Sydney Morning Herald, The Age and 60 Minutes revealed on Sunday that a federal law enforcement operation determined that up to 150 Qantas staff were linked to criminality, including bikie gangs.

Qantas Group chief security officer Luke Bramah said the claims were disturbing when the airline had not been told of any current investigation into its employees over organised crime.

Amid a dispute over the scale of the problem, the government has listed the Transport Security Amendment (Serious Crime) Bill for debate in the upper house on Tuesday to give the Australian Federal Police more scope to vet workers.

“If you are not in a position to resolve the foreign maritime crew issue at this stage, Labor
would be happy to consider splitting the bill to enable the airport security elements to pass the Senate this week and delay the passage of the maritime security elements until you are ready to tackle the issue of foreign crew,” she wrote.

“We both know that the vast majority of illegal drugs are brought into this country via our maritime ports and this is why Labor wants to close this big, gaping hole in our border security.

“Our national security is too important to get wrong. Serious laws are required to target serious crime.”

While Qantas has written to federal agencies asking for details of any concerns, Mr Bramah said the airline supported the bill before Parliament to give authorities more scope to vet people applying for security cards to work in aviation.

“There are multiple checks and balances in place already that we know work, but we have been strong supporters of introducing intelligence checks for all [card] holders,” he said.

Labor is seeking amendments to the bill including an avenue of appeal when someone is stopped from getting a job without knowing why and without any way to challenge the security assessment.

Labor senator Tony Sheldon, a former national secretary of the Transport Workers’ Union, said the bill needed safeguards to prevent people from losing their livelihoods without cause.

Senator Keneally is also seeking an amendment to define the “serious crime” that would justify action by security agencies, saying various federal laws have a dozen different definitions of the phrase and the definition should be a crime punishable by imprisonment for at least three years.

Another Labor amendment would set a 60-day time limit on security checks so people are not left without work while authorities consider applications.

But the strongest Labor concerns are about maritime security and the Coalition proposal to vet Australian port workers without applying similar rules to foreign crews.

“Your government’s transport security bill leaves a huge gaping hole in our border security,
especially at our maritime ports, because it fails to address the potential threat posed by crew
on board ‘flag of convenience’ vessels,” Senator Keneally says in her letter to the Prime Minister.