Saracens Mavericks’ Kat Ratnapala has no doubt that netball can “fly again” but admits that it will be a struggle for the franchise to secure their future.

Within the sporting arena, and away from it too, 2020 has been a year like no other. So many people have experienced things they never thought they would, and the last five months have challenged every aspect of peoples’ lives.

The Vitality Netball Superleague had played just three full rounds – and two additional matches – before the competition was paused in March, and then at the end of May, the 2020 season was cancelled entirely.

“Unfortunately, when it hit after three games, all income was basically wiped out,” Ratnapala said of Saracens Mavericks’ financial situation to Sky Sports News.

“So, not only funds coming through from our crowds but also sponsorship… there was literally nothing and it’s left a massive dent.

“We’d already paid out for the first five months or so of pre-season; trips to Manchester and Bath, kit, court hire, S&C and physio, so to then be hit by this – the ground fell from beneath our feet.”

Sadly, the franchise’s experience is not unique to them, or to netball.

Instead it is a familiar tale across different sports and as England slowly moves out of the lockdown period, it is becoming clear that women’s sport has been hit harder than men’s.

The final standings in the WSL and Tyrrells Premier 15s were both decided by points allocations as opposed to their seasons being played out, and the future of the England Women’s Sevens team looks in serious doubt.

On June 2, Saracens Mavericks decided that they needed to do something to try and take some of the jeopardy away from their financial situation, so put out an appeal using the fundraising platform GoFundMe.

“There was an immediate requirement to make sure that we had money coming through to the club [to pay for pre-season costs] and literally, we went into survival mode to think about what we could do,” Ratnapala added.

“The crowdfunding page was actually recommended by one of our volunteers, who had seen another semi-professional football do it and thought, why not?

“We took the same stance on it. We want to be around next year, and we wanted to do everything in our power to ensure that we are in Superleague next year.”

The GoFundMe target is set at £50,000 and a fifth of that target has been achieved. For Ratnapala, the finances are important, but it’s also helped to reinforce to her how engaged their community is.

“We’re not there,” she said. “Let’s make no bones about it, we’re definitely not at that £50,000 mark. But, do you know what, the fans and everybody who has been supporting us have been fantastic, they really have.

“The comments that we’ve had coming through, ideas that our volunteers have had and ones that our supporters are coming to us with, are great.

“To know that after 15 years in Superleague, they’re still behind us and trying to offer support and if it can’t be financially then it’s ideas, that’s been lovely.”

We’ve set up coaching webinars which are bringing some income into the club. We’re just trying to be as creative as we can whilst we can’t get back onto court.

Across sports, COVID-19 has shone a spotlight on the precarious nature of some infrastructures, clubs’ finances and overall funding models. With the Vitality Netball Superleague, it has clearly highlighted the variances between franchises’ operating models.

“We’re all very differently operated,” Ratnapala said. “We have our own accounts and we are totally separate from Saracens Rugby, which is completely different to what some people imagine we are.

“Whereas other franchises are joined with their professional entities and you then have universities as well. We’re all very different, which I guess from England Netball’s perspective makes governing and making sure that we’re all doing the same process quite hard to do.” 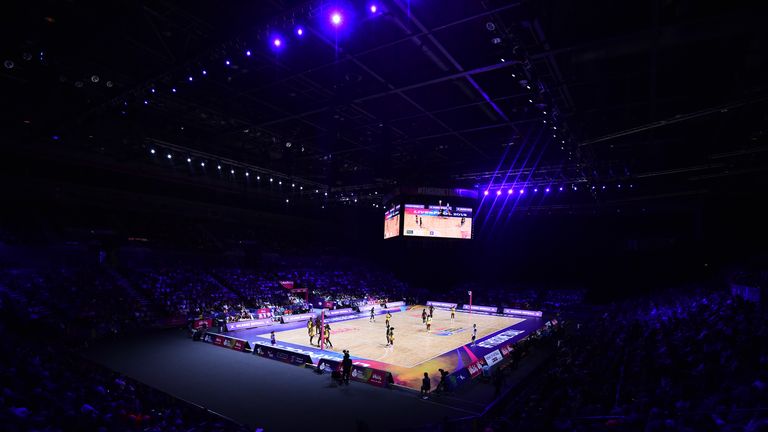 Prior to the pandemic, netball was riding on a wave of forward momentum after a highly successful home Netball World Cup had built on the success of the Vitality Roses at the Commonwealth Games in 2018.

The Vitality Netball Superleague Season Opener attracted the largest crowd for a British one-day netball event in February and elite athletes’ profiles were rising… and then it stopped.

“We definitely have got a product and we’ve definitely got people who are interested in our sport,” Ratnapala added. “For us, it’s making sure that we are doing everything we can to be visible.

“We are in a building time again. When I used to play it wasn’t professional at all, you had to have a career alongside netball. Now, we’ve got players who are full-time netballers. We’re on an upward trajectory and I believe we can get back to where we were, in the lead up to Liverpool.

“It’s somewhere, where we’ve been before [having to build] and grow up so, I’ve not doubt that we can fly again. I’m excited to be a part of that journey.”

🔎 Sky Sports’ Women’s Sport debate will be live on August 12 & we want to hear from you!

❓ Do you think women’s sport has been hit harder by COVID-19 than men’s? What does the future hold?

📩 Send in your questions for our panel to join the debate – use #WomensSportDebate!

With regard to Saracens Mavericks’ finances, Ratnapala and her team are continuing to explore all avenues to fully secure their future and be there when the 2021 Vitality Netball Superleague season commences.

“There’s lots of scope at the moment of different avenues we are exploring and trying to go into, to make sure that we were leaving no stone unturned,” she said.

“We’ve got things going on such as bank loans and conversations with England Netball etc. that we haven’t discounted, we’re still going through a lot of different processes.

“We’ve been in Superleague for 15 years and we’ve ridden a couple of waves along the way.