Kaley Cuoco & Karl Cook Still Like Each Other After Living Together 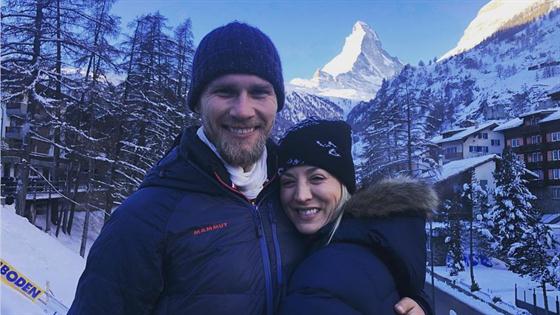 On Monday’s episode of Jimmy Kimmel Live, the Big Bang Theory alum joked that social distancing “forced” her and her husband Karl Cook to reach their latest relationship milestone: Moving in together. Joining host Jimmy Kimmel from the couple’s new home while donning a comical night shirt, she gave him an update on how it’s been going so far.

“So, we’ve been married for a year and a half, been together for almost four years,” she said after showing the late night host her impressive collection of mugs. “And we now, this quarantine has forced us to actually move in together. It’s been great for our relationship. And we like each other we realized, which is even better.”

Earlier this month, Kaley commemorated their big move via Instagram with a celebratory selfie. “HOME,” she captioned the picture, where Karl can be seen giving her a big kiss on the cheek as they snuggle up together.

Speaking with Us Weekly, she opened up about how excited she was to finally move in with her husband before making it official. “I’m actually excited. We’re totally ready, you know,” she said. “We do both travel a lot, which I think is very healthy. Our time at home is minimal, which makes us super appreciate it.”

Curious to know how the two have blended together since moving in together, Jimmy asked if he’s embraced her mugs. “He’s okay with all the mugs,” she shared. “You know, he’s got his weird stuff too.”

Despite living together well, Kaley admitted that unpacking hasn’t been going well. “I was shooting in New York and got sent back here, obviously, ‘cause of everything that was going on and we got to move into the house together,” she said. “So, we moved in and I can’t anything, but the house is great,” adding, “I think Karl would love it if I found my makeup at some point.”

As for how the couple is staying entertained while social distancing, Kaley said that their activities include drinking and playing with their three dogs, one of which they fostered during the pandemic.