After an illustrious career in the groups JJ Project, Jus2, and GOT7, the musician and actor strikes out on his own. 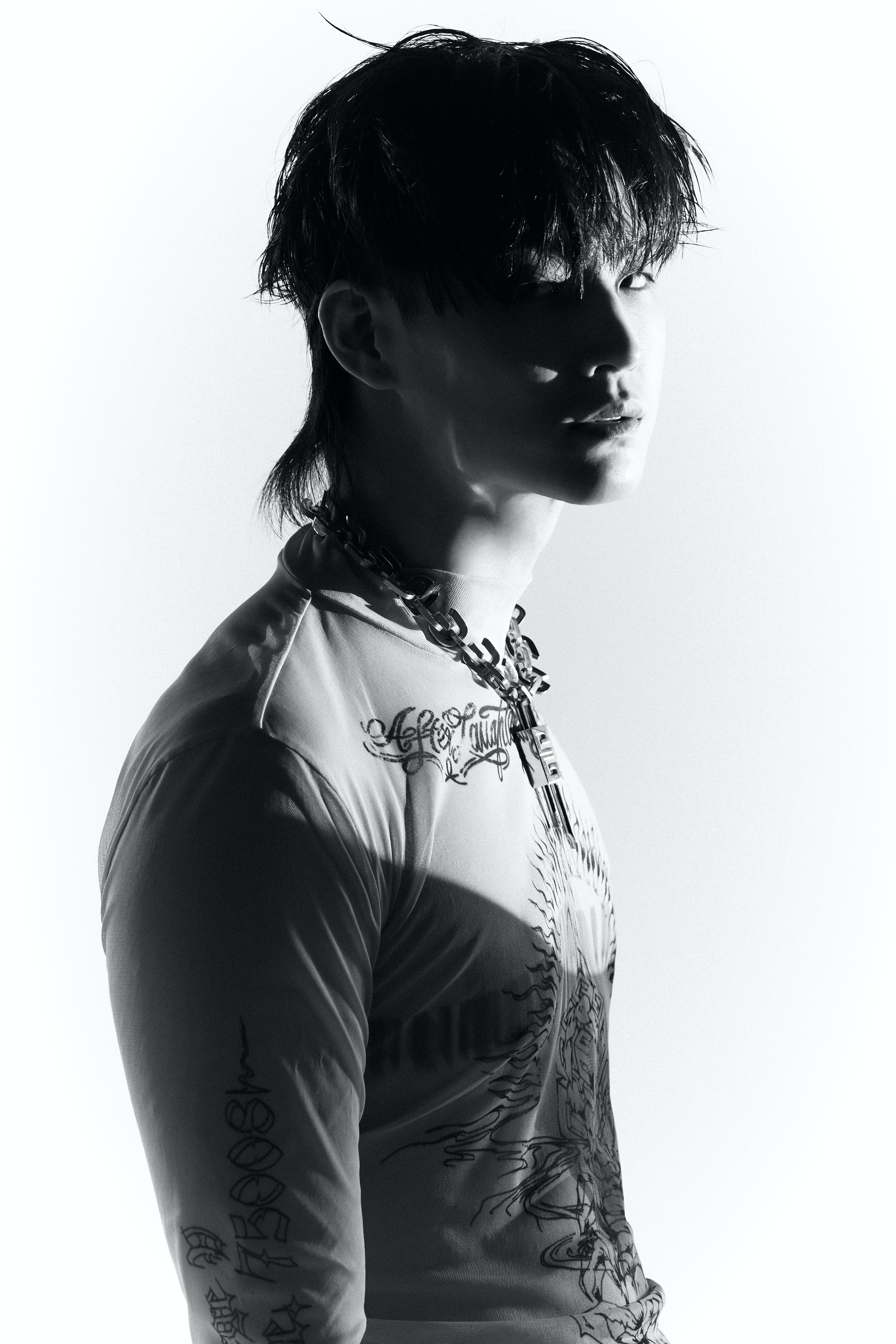 In the music video for his new single “Switch It Up,” the musician Jay B stands alone in a forest, surrounded by the emptiness of barren trees. But there’s one burst of vibrant verdure visible high above, as if the Earth has cleared space for the K-pop idol to shine. The visual accompanies the 27-year-old’s first solo single, a powerful re-introduction to a multi-hyphenate musician who has been a figurehead in the industry for nearly a decade. He’s been a celebrated b-boy and member of JJ Project and Jus2—but he’s best known as the leader of boy band GOT7 under the name “JB.” He’s also a member of the music collective ØFFSHORE (there, he records under the moniker Def.,) not to mention, adored for his work as a celebrated K-drama actor and photographer.

Above a trap beat, a flourish of falsetto in the chorus, Jay B’s lilts move effortlessly from English to Korean and back again on “Switch It Up”: “Baby ride my body / Girl, nice and calm / Baby I wanna switch it up.” Disregarding the PG-13 nature of the lyrics, the song isn’t too far removed from the sexy-sounding R&B of his stand-alone GOT7 solo songs, like “Sunrise” and “Rainy” (in the video for “Sunrise,” he’s also in the forest—but momentarily obstructed by greenery; now, he’s the star. The metaphors write themselves.) The song hit No. 1 on iTunes in 44 countries the day of release, including Brazil, France, India, and New Zealand, topping the iTunes European and Worldwide song charts. Clearly, Jay B had struck a chord.

“I wanted to make the song bold: to show that as a solo artist, Jay B is sultry, sexy, and edgy,” he explains through a translator over Zoom. It’s a weekend night in Seoul, and Jay B is sitting in an immaculate office designed like a music studio: windowless, record-breaking vinyl albums adorning the wall, a cadre of colorful employees walking in and out of frame. He’s wearing a textured tan blazer atop an army green shirt, his hair blown out straight and soft, bangs touching the tops of his cheek bones. No wonder he’s become an avant fashion icon the world over, unafraid to play with feminine and masculine styles, sometimes sporting facial piercings—an unusual look in the K-pop world. “Saint Laurent is a favorite. Margiela, that’s another. I find a lot of inspiration, vintage or luxury brands, through social media,” he says. “My life is, not in a bad way, but ordinary, so I like to try new things, [especially] in styling or fashion.” And his inclination for experimentation extends to his music, too.

Jay B smiles frequently and blushes whenever the word “sexy” crops up in conversation (even though D’Angelo, arguably the sexiest musician of all time, is one of his biggest influences). He’s charming and timid, but not at all reluctant—“comfortable” is how he describes his mood. He’s certainly shyer than the persona in his music, which makes “Switch It Up” appear all the more cathartic, an expression of himself fans are only now seeing. “I was definitely worried that [“Switch It Up”] would be too much of a sexy statement, in the beginning stages as a solo artist. [But] I started this career by chance, and my personality is that when you start, you keep on going. That’s my motto. I went through trials. But now that I’m starting my solo path, I’m going to work extremely hard, with the same mentality.”

Jay B, whose real name is Jae-beom Lim, was born in Siheung, in South Korea’s Gyeonggi Province, and grew up in Goyang outside of Seoul. Although he always loved music, choreography was his true passion. “As a child, I loved dancing. I really found my passion for it at 15. Through b-boying, I was introduced to hip-hop,” he recalls. It was then, at an age when most Americans are freshmen in high school, that the acrobatic Lim was scouted by JYP Entertainment, put through a rigorous idol training program, and five years later, debuted as “JB,” the main vocalist of GOT7. “[When] I got signed to my company, I had to start singing,” he says, letting out a cheeky laugh. “I studied dancing very hard. My grades, maybe not so much. I had dinner with my family, and I had to come clean and say, ‘I want to dance, not study.’ That’s where it kicked off—at 15, at the dinner table with my family.” In the years that followed, JB became one of the best-known K-pop idols on the planet, beloved by millions of fans, touring stadiums around the globe with GOT7 as top billing.

But that JB was then, and this is Jay B now. It has only been four months since GOT7 severed ties with their management company of seven years, JYP, (“Around the end of June, [GOT7] is getting together to talk about possible plans,” he assures eager fans.) It has been mere weeks since Jay B announced he signed with hip-hop label H1GHR MUSIC, founded by K-pop legend Jay Park and musician Cha Cha Malone, who produced “Switch It Up,” and yet, Jay B already has “about six or seven [solo] songs done,” and hopes to release an EP “as soon as possible.” “I’m going to release a wide range of different genres. I have a variety of stories to tell through my music. It’s going to be a full package,” he says. “Switch It Up” is simply a taste of what’s to come. “As a solo artist, there are so many things I want to express, [things] that I haven’t shown, my individuality. One step at a time, I will show the audience my true character.”

But it would be an oversight not to count the ways in which Jay B has already opened up to his listeners, especially when it comes to mental health. (A few weeks ago, while conducting a “What’s In My Bag?”-style interview with Korean Magazine Arena, he pulled out prescription medication for panic attacks and depression.) “It is not a light issue, to open up your mind and to understand that people are going through this. I realized the difficulties I was enduring, but I wanted to hide,” he explains. “Then I realized I had friends I could open up to. I could start facing my challenges.”

It’s an ongoing journey, not unlike the continuous evolution of his career. But Jay B is wise. “My wish is for everyone to be healthy, and for anyone who does not understand mental health awareness to be softer and more caring. That is what inspired me to open up about my struggles—so that everyone could find happiness,” he continues, taking a short pause to consider every word. “Even though we’re all wearing masks, go outside, get some sunlight, take a walk. When a really hard day comes, close your eyes and think about everyone that loves you, your friends or your family. Start a hobby. I’m learning the art of tea.” It’s great advice—and yet another skill to add to his growing list.