Talk about kelping the environment! Just Eat is testing compostable SEAWEED food boxes in drive to tackle plastic pollution in the takeaway sector

With the bank holiday weekend just a matter of days away now, many eager Brits will be excitedly deciding which takeaway to treat themselves to.

And if you’re considering ordering via Just Eat, your takeaway could arrive on your doorstep in a seaweed-lined food box.

Just Eat has announced that it is testing Notpla’s seaweed-coated takeaway boxes with 11 restaurant partners across the UK, including Freddy’s Chicken & Pizza in Liverpool, and Mario Pizza in Manchester.

The food delivery app estimates that the trial will stop as many as 30,000 plastic boxes from entering the waste stream. 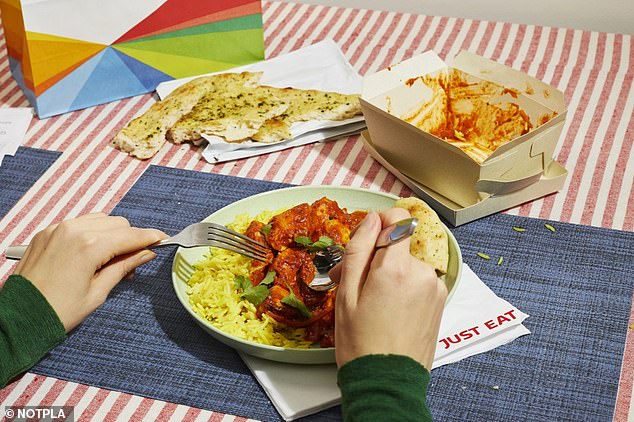 Just Eat has announced that it is testing Notpla’s seaweed-coated takeaway boxes with ten restaurant partners across the UK, including Freddy’s Chicken & Pizza in Liverpool, and Mario Pizza in Manchester

Restaurants taking part in the trial

The seaweed-coated boxes were first trialled with three London takeaways last year, but will now be tested with 11 partners across the UK for three weeks.

Robin Clark, Senior Director of Global Partnerships and Sustainability at Just Eat said: ‘We’re excited to continue our work with Notpla to create a credible alternative to the plastic box that is recyclable, home-compostable and which degrades in a matter of weeks.

‘It has all the benefits of plastic from a practical point of view but none of the negative environmental impacts.

‘We look forward to expanding the use of the boxes more widely with the aim to roll these out across the UK and our other markets, so that customers across the globe can enjoy their favourite takeaways without the plastic waste.’

The seaweed-lined takeaway boxes are fully recyclable, and can decompose in four weeks in a home compost, according to Notpla.

‘A typical takeaway box has synthetic additives added directly into the pulp, making it impossible to decompose,’ Notpla’s website explains.

‘During the composting process, we can observe that, while the board degrades, the coating itself remains completely unchanged.’ 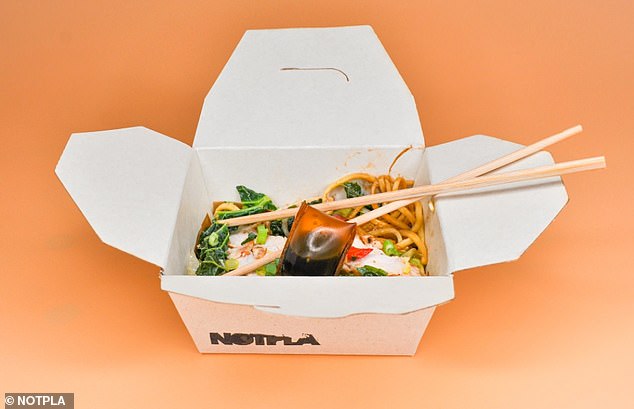 The seaweed-lined takeaway boxes are fully recyclable, and can decompose in four weeks in a home compost, according to Notpla

While you might worry that a seaweed-lined box would be rather leaky, Notpla reassures that this is not the case.

It added: ‘By pioneering the use of seaweed, we created a coating that is both grease-proof and water resistant, while being naturally biodegradable and home compostable.’

The trial is part of Just Eat’s drive to tackle plastic pollution in the takeaway industry.

Each year, Just Eat estimates that a whopping 500 million plastic takeaway boxes are used across the UK takeaway industry, much of which end up in landfill.

Just Eat and Notpla have previously worked together to pilot the use of seaweed-based sauce sachets.

HOW MUCH RECYCLING ENDS UP IN LANDFILL?

Every day, millions of us drop a plastic bottle or cardboard container into the recycling bin – and we feel we’re doing our bit for the environment.

But what we may not realise is that most plastic never gets recycled at all, often ending up in landfill or incineration depots instead.

Of 30 billion plastic bottles used by UK households each year, only 57 per cent are currently recycled, with half going to landfill, half go to waste.

Most plastic never gets recycled at all, often ending up in landfill or incineration depots instead. Around 700,000 plastic bottles a day end up as litter

This is largely due to plastic wrapping around bottles that are non-recyclable.

Shockingly, less than 0.4 per cent of these are recycled.

Most cups are made from cardboard with a thin layer of plastic.

This has previously posed issues with recycling but can now be removed.

Five specialist recycling plants in the UK have the capacity to recycle all the cups used on our high-streets.

Ensuring the paper cups end up in these plants and are not discarded incorrectly is one of the biggest issues facing the recycling of the paper vessels.