As anti-racism protests in the wake of George Floyd’s death continue across the nation, America has had a reckoning over race. It’s fitting — if not overdue — that a Black woman will now have a leading role in covering it.

With the July 20 premiere of MSNBC’s “The ReidOut,” Joy Reid is making history as the only Black woman hosting a prime-time cable evening news show. And people are tuning in.

The first episode of the show, which featured former Vice President Joe Biden, former Secretary of State Hillary Clinton and mayors Keisha Lance Bottoms and Lori Lightfoot, drew 2.6 million total viewers. That’s the second-highest rating ever for a regularly scheduled 7 p.m. show in MSNBC history, according to the network.

But for Reid, it’s not surprising that it took this long for a Black woman to lead a prime-time cable news show. Gwen Ifill was the last Black woman to host a nightly news show, “PBS NewsHour,” until her death in 2016.

“When I was coming up, almost all of the anchors were white men, and when that’s the case, the feeding system for people who could even be prime-time hosts is pretty limited,” Reid, 51, told HuffPost. “So it’s not surprising that it has taken longer for that feeder system to start to bubble up people of color.” 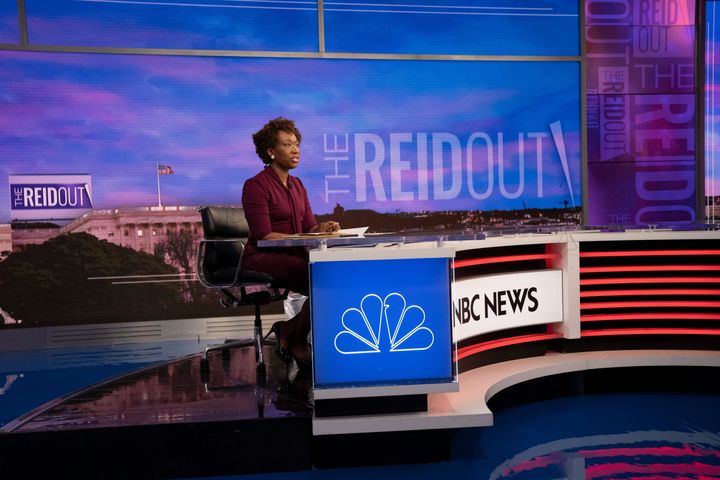 Reid took over the time slot that opened in March, when “Hardball” host Chris Matthews resigned amid sexual harassment allegations and complaints about past sexist remarks. She had previously hosted weekend talk show “AM Joy” since 2016.

Her new show features one-on-one conversations with politicians and newsmakers, and while Reid focuses on political analysis, the interviews highlight the intersection of race, justice and culture.

Reid said what makes her show different from typical cable news is that she draws on her own unique experiences.

And that representation on TV matters, as CNN legal analyst Elliot Williams found out while watching the premiere of Reid’s show with his 3-year-old daughter.

“Not five seconds into #TheReidOut with @JoyAnnReid, my three-year-old daughter – who’s in the room – points at the screen and shouts out, “MOMMY, SHE HAS CURLY HAIR JUST LIKE ME!” Williams tweeted. “Representation is no joke, people.”

Reid joins an exclusive club of Black women at the helm of news shows, including Melissa Harris-Perry, who hosted an eponymous MSNBC weekend show, and Tamron Hall, who hosted MSNBC’s “Live with Tamron Hall” before becoming the first Black woman to co-anchor “Today.”

Though both ultimately left the network, Reid doesn’t feel that the time they spent there was wasted. “Tamron and Melissa are not only friends of mine, but they’re both role models to me as well,” she said. “Look at what they accomplished and the space they created for someone like me.”

Reid hopes prime-time news will soon be filled with more people of color. “We’re putting an anchor down for diversity, and you can’t take it back,” she said.

The nation better get ready, Reid said. The anchor, a frequent critic of President Donald Trump, realizes that her presence in prime time is a direct response to our rapidly diversifying nation — and hopes it opens the door for others.

“I think as angry and mean as Trumpism is, it’s also futile because I’m not going to be the only Black woman on prime time,” she said. “They’re going to be many more: the crews, the teams, the managers, the bosses — it’s all becoming more diverse.

“It’s all changing and it’s inevitable and it’s irrevocable,” she said. “And so I think every time we put a marker down, we make that clear. And who doesn’t like it, they better learn to love it.”