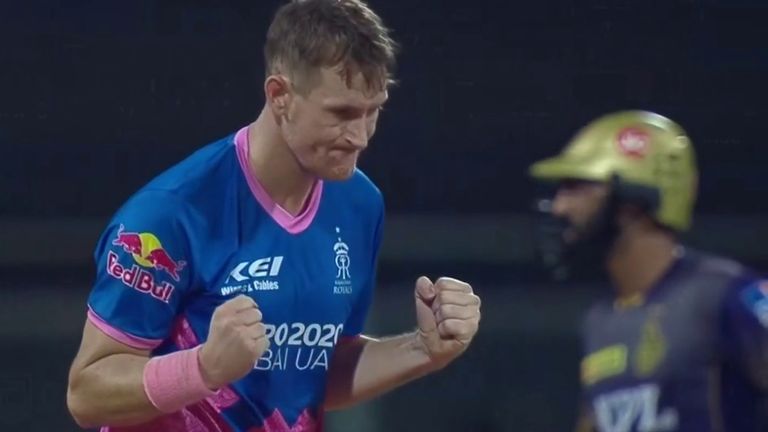 Chris Morris led a fine bowling effort as Rajasthan Royals moved off the bottom of the Indian Premier League table with a six-wicket win over Kolkata Knight Riders.

The South African all-rounder took 4-23 as the Royals restricted KKR to 133-9 before captain Sanju Samson (42no from 41 balls) took charge with the bat and guided them to victory in the 19th over.

Jos Buttler’s disappointing start to the tournament continued though as, having already been struck on the helmet by Pat Cummins, he was dismissed for five, although he fared better than his England skipper Eoin Morgan, who was run out without facing a ball for Kolkata.

Rajasthan’s second win of the campaign moves them up to sixth, level on points with Mumbai Indians in fourth, while Kolkata replace them in propping up the table with just one win in five.

Having been asked to bat first, Morgan’s team failed to gain any real momentum throughout their innings after an extremely disciplined start from the Rajasthan bowlers.

Top fielding from Jos Buttler in the covers, one stump to aim at and a direct hit means Shubman Gill is a goner! #KKRHaiTaiyaar 25-1 #IPL2021

Left-armers Jaydev Unadkat, Chetan Sakariya and Mustafizur Rahman put the pressure on, the latter had Shubman Gill dropped on six, before the opener tried to force a single into the covers and was superbly run out by Jos Buttler; the England man had just one stump to aim at but found his target with Gill (11) well short of his ground.

Nitish Rana (22 from 25) and Rahul Tripathi briefly got things moving for KKR but the former fell to Sakariya (1-31) in the ninth over, Unadkat (1-25) got Sunil Narine (6) in the next and when Morgan departed for a diamond duck in the 11th, Tripathi selling his captain a dummy, the Knight Riders were 61-4.

Tripathi (36 from 26) himself lasted until the 16th over when he holed out after being deceived by Mustafizur’s (1-22) off-cutter and any chance of a grandstand finish to the innings were ended by Morris as he accounted for Andre Russell (9) and Dinesh Karthik (25 from 24) in the space of three balls to end the 18th.

Morris finished strong with two more wickets in his last over before handing over to the Royals batsmen to begin their chase of a modest total.

Rajasthan have struggled for runs from their opening partnership so far in this year’s IPL and that trend continued as Buttler, having worn a Cummins bumper, hit Varun Chavravarthy’s first ball to the fence, only to be trapped lbw by the googly next ball.

Teenager Yashasvi Jaiswal had started well but was dismissed by Shivam Mavi (1-19) attempting to add to his five boundaries but Rajasthan were always ahead of the rate and Samson and Shivam Dube (22 from 18) barely had to take a risk in adding 45 for the second wicket.

Chavravarthy (2-32) came back and broke the stand and Prasidh Krishna (1-20) bounced out Rahul Tewatia (5) as KKR did their utmost to set up a dramatic finale.

However, Samson and David Miller (24 from 23) dashed those hopes as they calmly navigated the last few overs and sealed a comfortable win with seven balls to spare.

It’s an IPL double-header on Sunday as Chennai Super Kings take on Royal Challengers Bangalore from 10.50am before Sunrisers Hyderabad face Delhi Capitals from 2.50pm. Watch both games live on Sky Sports Cricket.