Home » Lifestyle » iPad Air gets unbelievable discount in Prime Day sales, but it’s a deal some should avoid

iPad Air gets unbelievable discount in Prime Day sales, but it’s a deal some should avoid 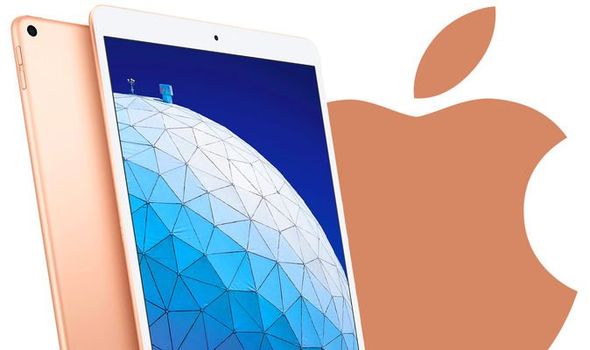 Apple unveiled its latest iPad Air during its September product showcase. The new model has been redesigned from the ground-up and looks much closer to the pricier iPad Pro than previous models, thanks to the edge-to-edge screen and flat edges. Like the iPad Pro, the latest iPad Air supports the second-generation Apple Pencil, which recharges wirelessly when it magnetically sticks to the chassis. It also has the latest A14 Bionic processor tucked inside, which promises a performance boost and battery life gain. Apple has confirmed the new iPad Air will launch “in October,” but hasn’t specified exactly when that’ll be.

The Californian company is holding another product showcase tonight, where it’s widely-tipped to announce four new iPhone models. Given that these handsets are powered by the same A14 brains, it’s likely we’ll find out when the new iPad Air models will begin hitting store shelves worldwide. Ahead of the launch of the updated tablet, Amazon has slashed the price of the previous iPad Air model as part of its Prime Day sales.

Needless to say, if you want the latest and greatest from the iPad team in California, it might be worth waiting until the new 2020 model is available to buy. So, some will definitely want to swerve this discount, but for some, this tablet will be a brilliant buy.

For those who don’t know, the annual Prime Day sales event, which is reserved for those who subscribe to the Amazon Prime membership scheme, sees the Seattle-based retailer roll out thousands of deals across a wide range of departments. Some of these discounts are available for the duration of the event, which lasts 48-hours this time around, while some are Lightning Deals which expire after a certain amount of time has elapsed – or the stock has depleted. 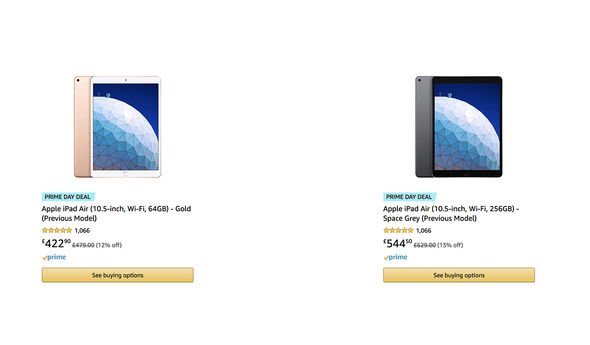 Depending on what type of deal you’re looking at – you might need to act fast to get the item at the advertised price.

Ahead of a potential announcement around the new iPad Air this evening, Amazon has slashed up to £85 off the existing model. Unfortunately, these are time-limited deals – so you’ll need to act fast. Since the start of Prime Day this morning, Amazon has already sold-out of the Silver colour option – leaving only two iPad Air models on offer, instead of the three that could be bought at midnight. So, if you’re looking to get your hands on a new tablet and don’t want to cough-up full price in the Apple Store – you should add to your basket as soon as possible.

The Prime Day deals on iPad Air are as follows –

If you’ve never heard of Amazon Prime Day before – don’t worry, Express.co.uk has got you covered. We’ve put together a little guide to sorting the best deals from the pretenders [] and have got the skinny on how you can knock £5 off your first order of £25 or more during the sales.

On top of that, Express.co.uk will be keeping our eyes peeled for stellar bargains, best-ever discounts and more throughout the 48-hour Prime Day period. So, stay tuned to find out what’s worth your money… and which items are really not worth a second look.

This article contains affiliate links, which means we may receive a commission on any sales of products or services we write about. This article was written completely independently, see more details here.

Related posts:
Tougher lockdown 'probably' needed, admit ministers amid SAGE row
How To Apply For Channel 4’s ‘Changing Rooms’ Reboot
Popular News
Strictly Come Dancing 2020: Made in Chelsea’s Jamie Laing to EastEnders star Maisie Smith – meet the line-up
22/10/2020
Man Utd wonderkid Ramon Calliste, called ‘the next Giggs’, now owns luxury watch business and makes £5m a year – The Sun
26/03/2020
Megan Thee Stallion Addresses Criticism Over Twerking: ‘I Love to Shake My A**’
26/03/2020
Police guard shops to stop coronavirus panic-buyers and enforce social distancing – The Sun
26/03/2020
Coronavirus: Good Morning Britain’s Dr Hilary reveals ‘game-changing’ self-testing kit
26/03/2020
Recent Posts
This website uses cookies to improve your user experience and to provide you with advertisements that are relevant to your interests. By continuing to browse the site you are agreeing to our use of cookies.Ok