Non-native ‘alien’ species introduced by humans to an area near to a protected wildlife site are destroying natural habitats and killing local species, study warns.

Researchers from the Chinese Academy of Science and University College London found that protected areas across the globe were at risk from these ‘alien’ species.

The team say the majority of protected sites are currently keeping invasive animals at bay, but it was an ongoing battle with invasive species often just a few miles away.

These ‘alien species’ may kill or out compete native species and destroy habitats – creating one of the top drivers of global biodiversity loss, researchers claim.

These alien species are as little as 6 miles from a protected site, such as the American mink found near the Cairngorms National Park in Scotland. 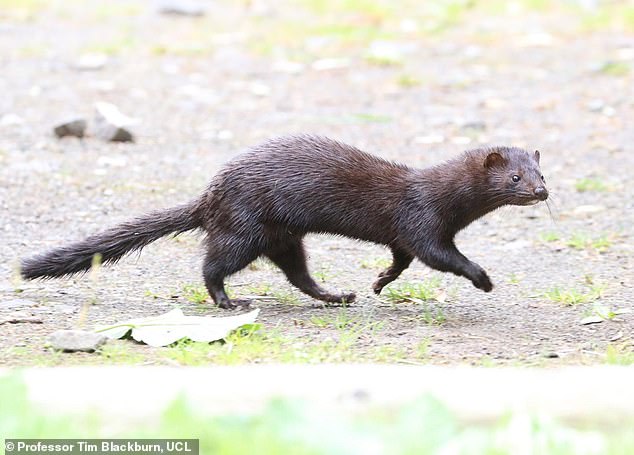 American mink (Neovison vison) was found in 1,251 protected areas such as Cairngorms National Park in the UK, where this photo was taken

DOZENS OF ALIEN SPECIES ARE COMMONLY FOUND NEAR PROTECTED SITES

The Chinese and UK team say these invasive species don’t know that an area has been designated ‘protected’ to safeguard endangered or at risk local species and are just doing what comes naturally – the humans that introduced them are at fault.

Co-author Professor Tim Blackburn from UCL said one of the most harmful ways people are impacting the natural environment is through the introduction of species.

These ‘alien’ species are animals that ‘do not occur naturally in an area, but have been taken there by human activities.’

‘These species may kill or compete with native species, or destroy habitats, amongst other impacts,’ said Blackburn.

‘Invasions by alien species are regarded as one of the top five direct drivers of global biodiversity loss, and aliens are establishing themselves in new areas at ever increasing rates.

‘Protected areas are a cornerstone of biodiversity conservation, but aliens don’t know where their boundaries lie. It’s important to know whether these areas might protect against the spread of invasive species.’

They then assessed whether these species occurred within, or near, the boundaries of the 199,957 protected areas across the globe.

These sites are defined by the International Union for Conservation of Nature (IUCN), including wilderness areas, national parks, and natural monuments or features.

Almost all of those areas may be at risk of invasion, as an invasive species was found within 62 miles of the boundaries of 99 per cent of the protected areas.

For 89 per cent of the protected areas, there was an alien species resident within just six miles of the boundaries.

More than 95 per cent of the protected areas were deemed to be environmentally suitable for the establishment of at least some of the alien species being studied.

The researchers also investigated common factors among the protected areas that are already home to alien species.

They found that protected areas tend to have more alien animal species if they have a larger human footprint index, due to factors such as transport links and large human populations nearby. 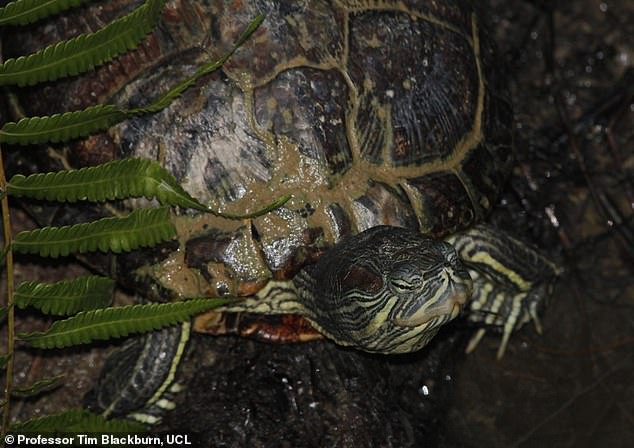 Red-eared slider (Trachemys scripta), a semiaquatic turtle, was found in 164 protected areas such as Singapore nature reserves (as depicted in photo) 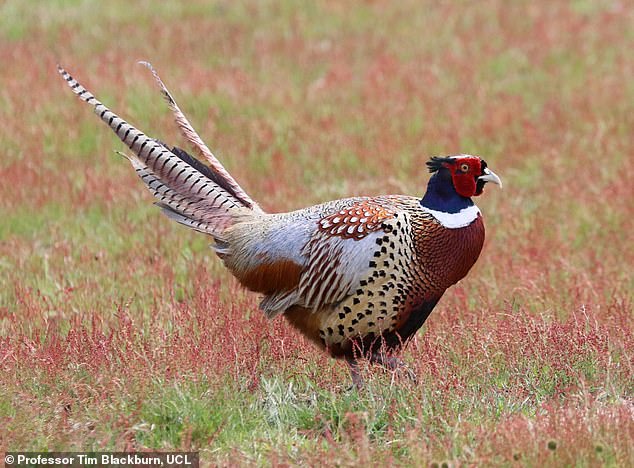 Ring-necked pheasant (Phasianus colchicus) found in 4,822 protected areas including UK sites such as Minsmere (where this photo was taken)

They found that the older protected areas tend to be in more remote areas, so they are less exposed to human impacts.

‘But this might not last,’ Yimming added. ‘Areas readily accessible to large numbers of people are the most vulnerable.’

‘We need to increase efforts to monitor and record invasive alien species that people may bring into protected areas, deliberately or by accident, especially damaging species like the American bullfrog, brown rat and wild boar.’

The findings do not suggest that the rich existing biodiversity in protected areas acts as a barrier to invasions, as they found mixed evidence on the relationships between existing native biodiversity and presence of invasive species.

‘If alien species continue to spread – and we would expect many to do that – many more protected areas will have their boundaries reached, and potentially breached, by these alien species,’ Professor Blackburn said.

The research has been published in the journal Nature Communications.

EXTINCTION LOOMS FOR MORE THAN ONE MILLION SPECIES

Nature is in more trouble now than at any time in human history with extinction looming over one million species of plants and animals, experts say.

That’s the key finding of the United Nations’ (UN) first comprehensive report on biodiversity – the variety of plant and animal life in the world or in a particular habitat.

The report – published on May 6, 2019 – says species are being lost at a rate tens or hundreds of times faster than in the past.

Many of the worst effects can be prevented by changing the way we grow food, produce energy, deal with climate change and dispose of waste, the report said.

– Turning forests, grasslands and other areas into farms, cities and other developments. The habitat loss leaves plants and animals homeless. About three-quarters of Earth’s land, two-thirds of its oceans and 85% of crucial wetlands have been severely altered or lost, making it harder for species to survive, the report said.

– Permitting climate change from the burning of fossil fuels to make it too hot, wet or dry for some species to survive. Almost half of the world’s land mammals – not including bats – and nearly a quarter of the birds have already had their habitats hit hard by global warming.

– Polluting land and water. Every year, 300 to 400 million tons of heavy metals, solvents and toxic sludge are dumped into the world’s waters.

– Allowing invasive species to crowd out native plants and animals. The number of invasive alien species per country has risen 70 per cent since 1970, with one species of bacteria threatening nearly 400 amphibian species.

Related posts:
Should Someone New Direct the Next 'Avengers' Movie?
Panda escapes Danish zoo enclosure before tranquilized with a dart
Popular News
Young mum's beautiful children's book discovered after she died at 37
28/09/2020
Man Utd wonderkid Ramon Calliste, called ‘the next Giggs’, now owns luxury watch business and makes £5m a year – The Sun
26/03/2020
Megan Thee Stallion Addresses Criticism Over Twerking: ‘I Love to Shake My A**’
26/03/2020
Police guard shops to stop coronavirus panic-buyers and enforce social distancing – The Sun
26/03/2020
Coronavirus: Good Morning Britain’s Dr Hilary reveals ‘game-changing’ self-testing kit
26/03/2020
Recent Posts
This website uses cookies to improve your user experience and to provide you with advertisements that are relevant to your interests. By continuing to browse the site you are agreeing to our use of cookies.Ok