Australia will temporarily lower the cap on the number of international arrivals and introduce new rules around air travel, Prime Minister Scott Morrison has announced, as the country moves to combat the UK's new mutant strain of COVID-19.

Mr Morrison said the national cabinet had decided to take "a number of actions" that relate to quarantine and flights to "reduce and de-bulk the risk in terms of exposure to the new strain". 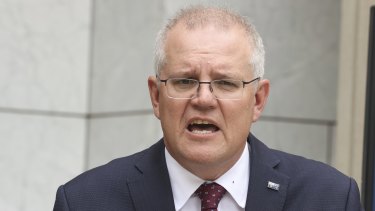 Scott Morrison at a press conference on Thursday. Credit:Alex Ellinghausen

Caps on international arrivals in NSW, Western Australia, in Queensland will be reduced by 50 per cent until February 15 and travellers to Australia must now return a negative COVID-19 test result prior to their departure to Australia.

"There will be exemptions in extenuating circumstances. This could include for seasonal workers from amber-risk countries where there is limited access to testing," he said.

Masks will also be mandatory on all flights, both international and domestic.

"Individuals – including travellers and staff – must undertake measures for infection prevention and control for international travel," Mr Morrison said.

The Prime Minister also said the Commonwealth had declared Brisbane a hotspot after the new, more transmissible strain of the coronavirus was detected in a quarantine hotel cleaner. He said 80 per cent of Australians registered overseas are now in countries where the new strain of COVID-19 is evident.

"And there are other strains as well, as the Chief Medical Officer will set out, which means that this virus continues to write its own rules, and that means that we must continue to be adaptable in how we continue to fight it," he said.

"What we do know is that this new strain is some 70 per cent more transmissible than the previous strains of the virus. This strain is likely to become, in the very near future, the dominant strain [as it largely already is] in the UK," Mr Morrison said.

"The idea that it somehow can be contained just out of the United Kingdom is a false hope."

He said that meant the lockdown in Brisbane implemented by the Queensland Premier today was very important.

"The situation in Brisbane is a serious situation… It moves so quickly – far more quickly than previous strains of the virus – and that means we need to give our contact tracers that head start to ensure that they can track down and run down all of the contacts from this individual and ensure that they can be identified."

He thanked everyone in Queensland for their patience.

"This precautionary approach, we believe, is very sensible. It has the full support of our Chief Medical Officer, the AHPPC, all the premiers, the chief ministers and, of course, myself," he said.

"I am advised and believe that this is the most prudent course of action to ensure that the great gains that have been made over the course of this last year are not put at risk by this most recent strain."

Related posts:
Kim Kardashian & Kanye West's $60 Million Dream Home – Who Gets It???
Rapper DaBaby ‘detained by police during Hollywood shopping spree’
Popular News
Newport keeper Tom King scores with extraordinary goal kick
20/01/2021
Man Utd wonderkid Ramon Calliste, called ‘the next Giggs’, now owns luxury watch business and makes £5m a year – The Sun
26/03/2020
Megan Thee Stallion Addresses Criticism Over Twerking: ‘I Love to Shake My A**’
26/03/2020
Police guard shops to stop coronavirus panic-buyers and enforce social distancing – The Sun
26/03/2020
Coronavirus: Good Morning Britain’s Dr Hilary reveals ‘game-changing’ self-testing kit
26/03/2020
Recent Posts
This website uses cookies to improve your user experience and to provide you with advertisements that are relevant to your interests. By continuing to browse the site you are agreeing to our use of cookies.Ok