Inside Prince Harry and Meghan Markle's stay with the Clooney's

Lake Como with the Clooneys! The Sussexes jetted out to join Princess Eugenie and Jack Brooksbank at George and Amal’s luxury Italian villa where they lounged by the pool and Prince Harry explored on motorbike, biography claims

Prince Harry and Meghan Markle joined George and Amal Clooney at their Italian villa in Lake Como to relax by the pool and explore on motorbikes, according to the authors of new biography Finding Freedom.

Authors Omid Scobie and Carolyn Durand claim the couple weren’t the only royal guests invited to stay at the A-list couple’s luxurious home – because their visit overlapped with Princess Eugenie and Jack Brooksbank’s stay, too.

The bombshell book, which is out today, alleges that George Clooney, 59, arranged for Harry, 35, and Meghan, 39, who tied the knot at St George’s Chapel in Windsor on May 19, 2018, to fly from London to Lake Como on his own private jet In the early evening of August 16.

The newlyweds are then believed to have arrived into Milan’s airport, and from there were driven in an unmarked motorcar to George and his human rights barrister wife’s Villa Oleandra.

During the three-day visit, a source said, ‘Meghan and Amal spent a lot of time relaxing by the pool and playing with the twins while George and Harry checked out George’s motorbike collection. Harry took one of them out with one of his protection officers. George recently had an accident, so he wasn’t back on his bike yet.”

‘The duke and duchess weren’t the only guests that weekend. Eugenie and her fiance, Jack Brooksbank, were already at the villa when Harry and Meghan arrived, their visits overlapping briefly.’ 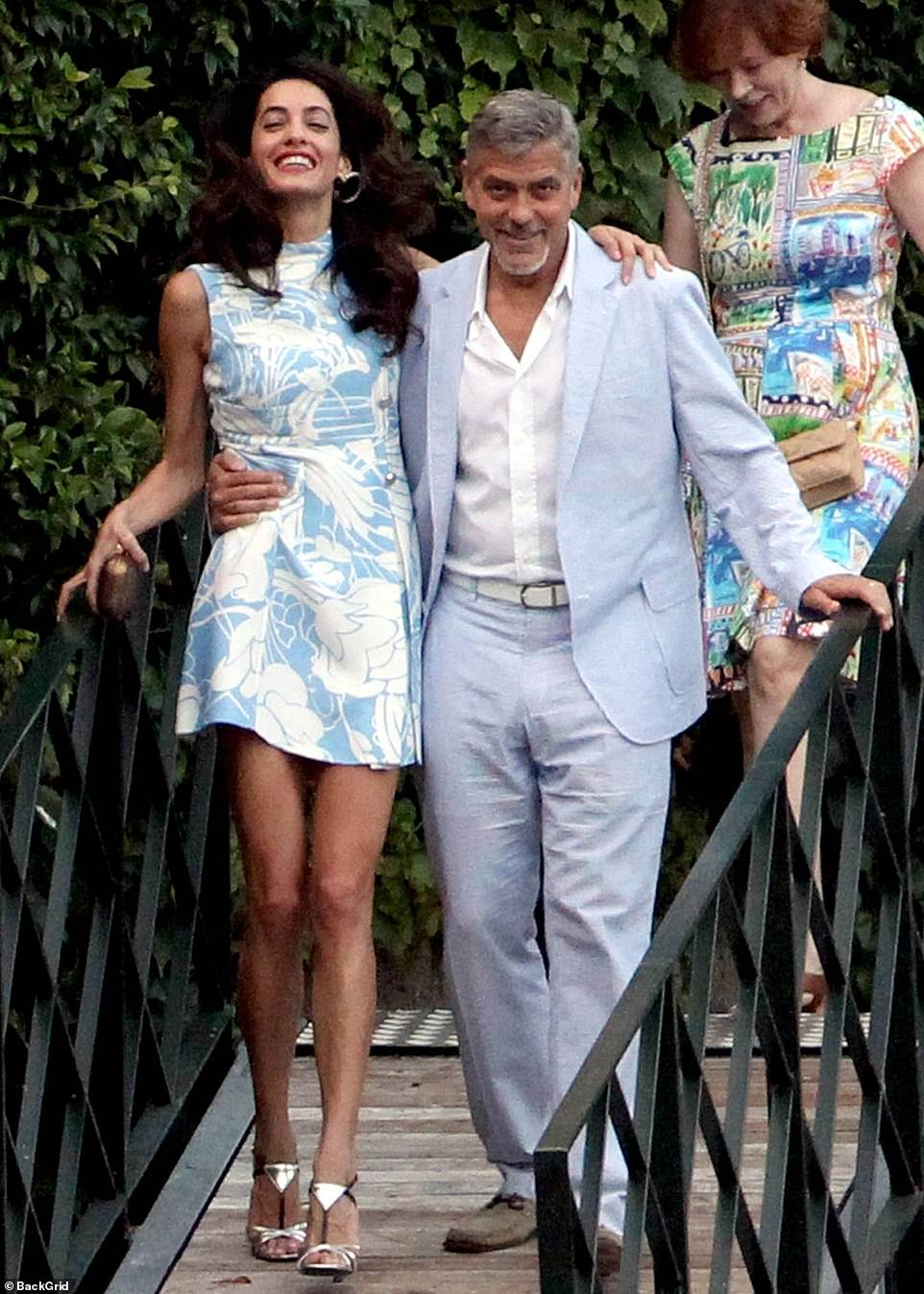 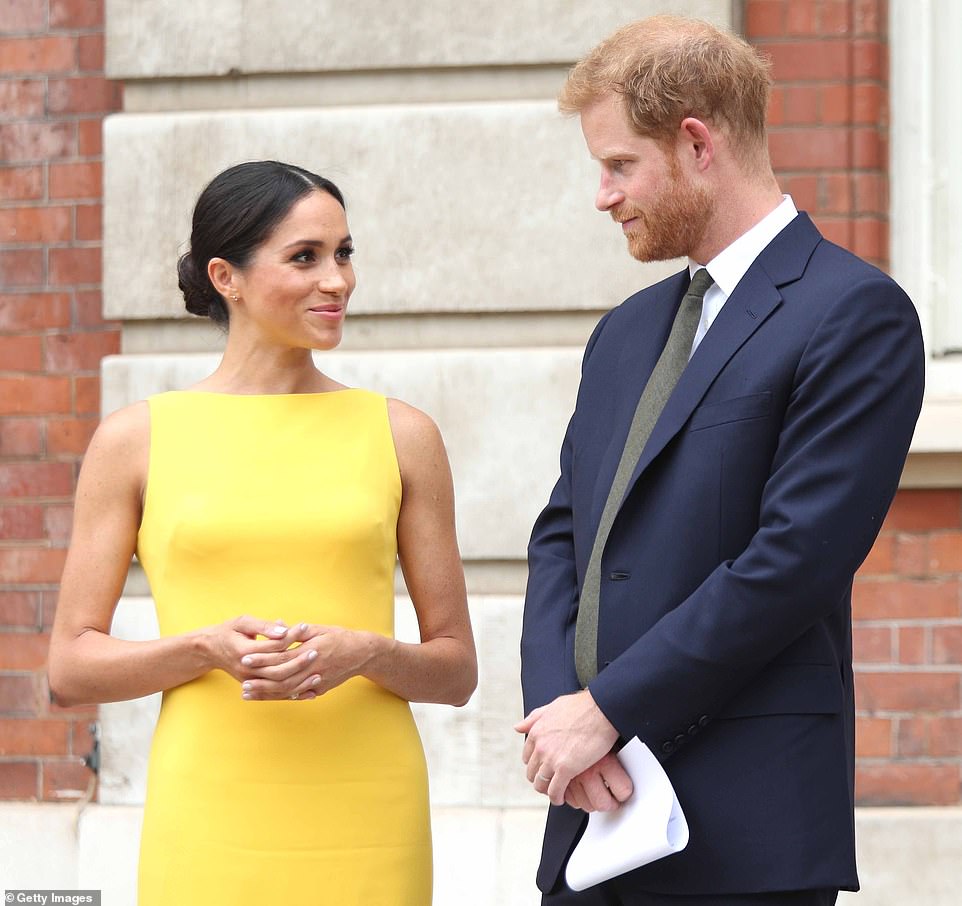 The book alleges that George Clooney arranged for Harry and Meghan to fly from London to Lake Como on his own private jet In the early evening of August 16. Pictured, attending a reception marking the culmination of the Commonwealth Secretariats Youth Leadership Workshop, at Marlborough House in London on July 5, 2018 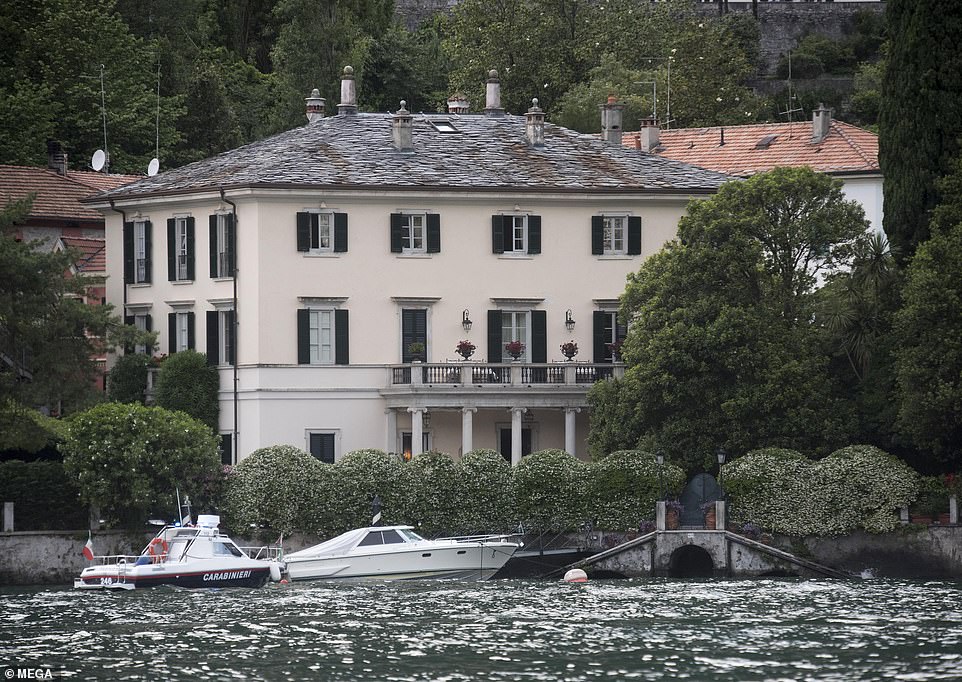 During the three-day visit to the 25-room mansion (pictured), a source claimed that Meghan and Amal spent a lot of time relaxing by the pool and playing with the twins, while George and Harry checked out George’s motorbike collection 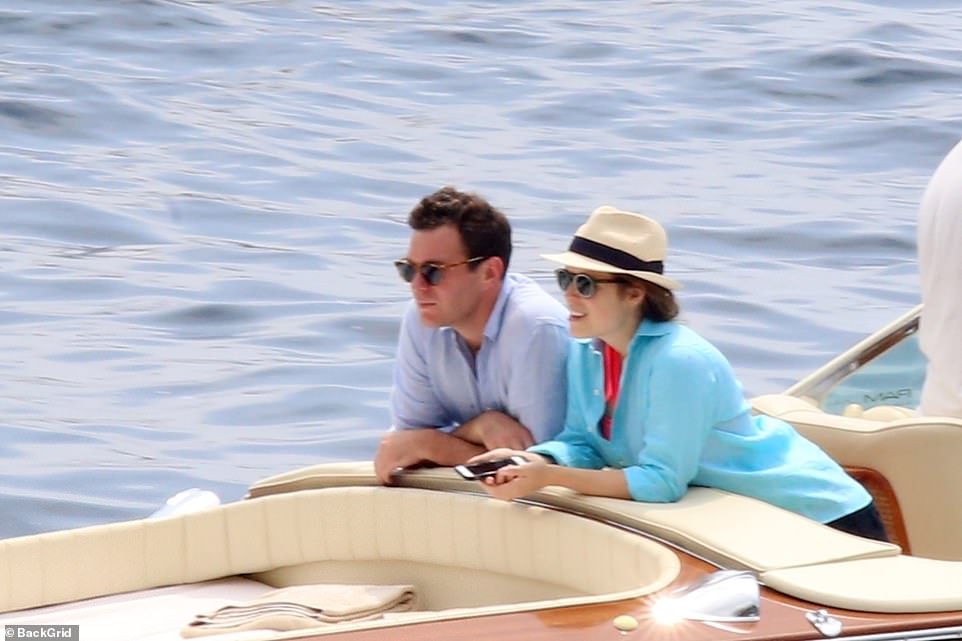 The authors went on to claim that the Clooneys, who have twins Alexander and Ella, aged three, had been staying at their twenty-five-room mansion a month before the Duke and Duchess of Sussex arrived.

They had previously hosted an array of high-profile friends – including Cindy Crawford and Rande Gerbe and Stella McCartney and her husband – not to mention David and Victoria Beckham and their children the previous summer.

According to the authors, the villa, which is located in the village of Laglio, boasts an outdoor theater, a swimming pool, and a garage to house the movie star’s five vintage motorbikes.

They continued: ‘It also included a tennis court, a full gym, huge bathrooms, and a ‘pizza parlor’ complete with pizza oven. The ornately carved ceilings in each room were a talking point alone.’ 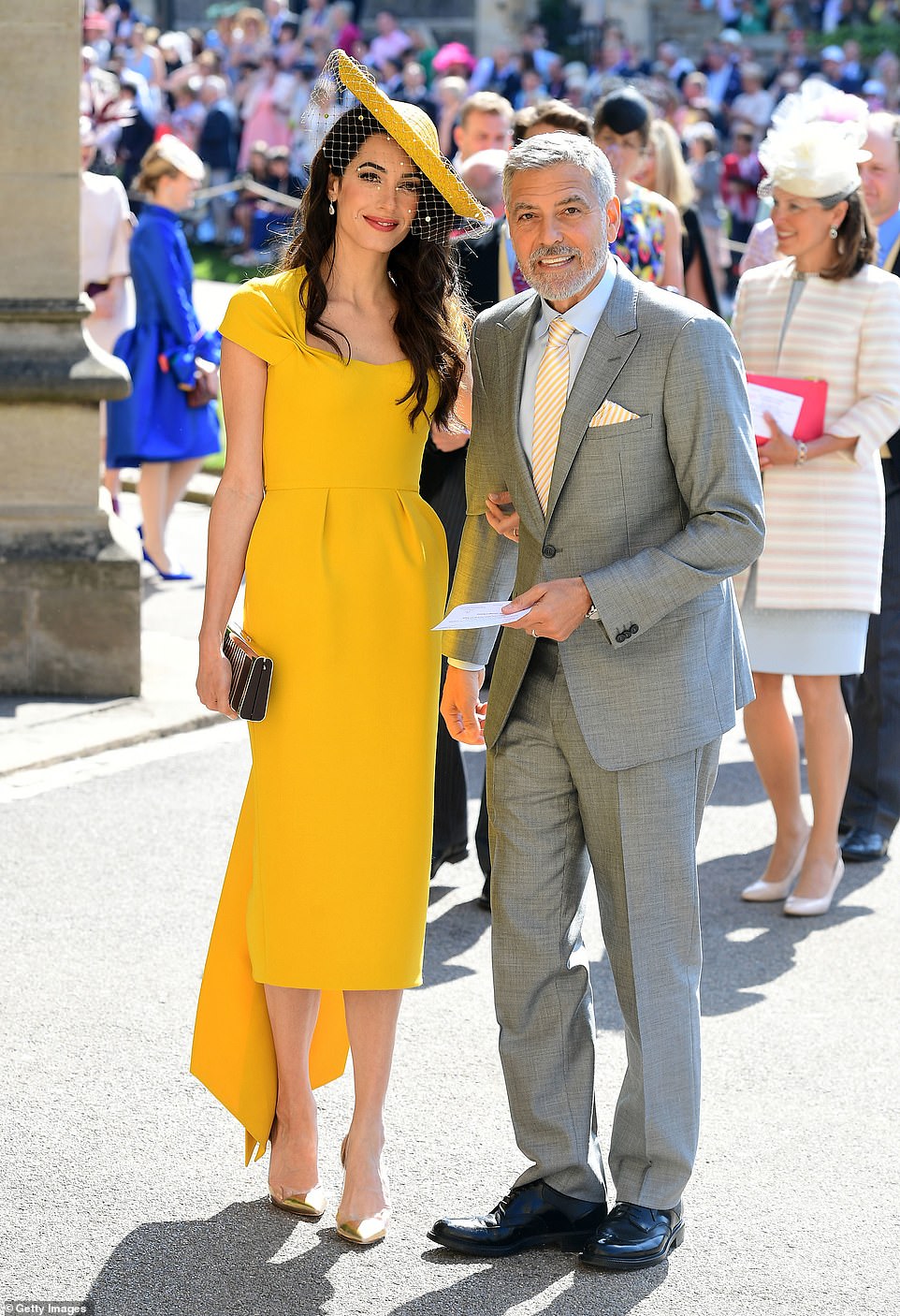 Amal and George Clooney arrive at St George’s Chapel at Windsor Castle before the wedding of Prince Harry to Meghan Markle on May 19, 2018 in Windsor 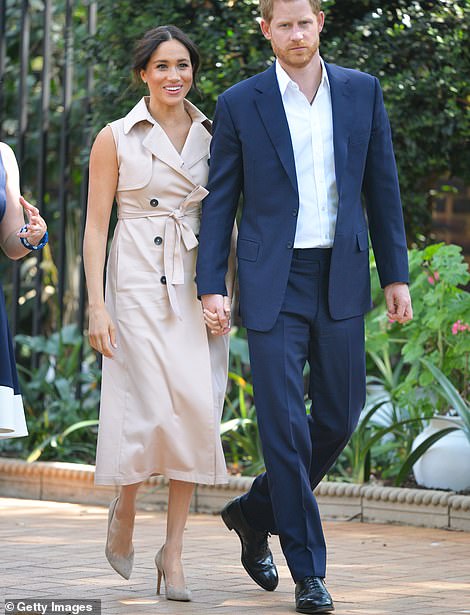 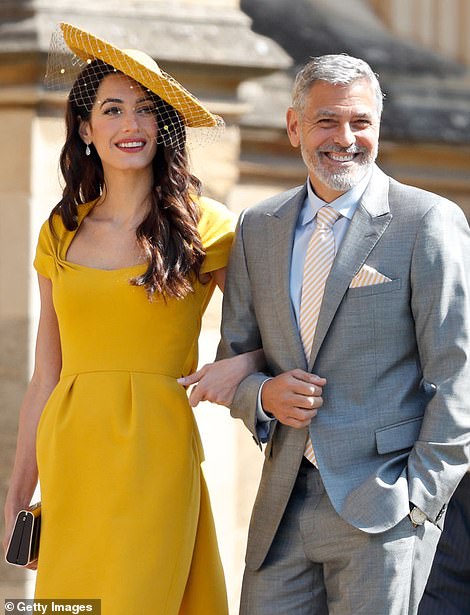 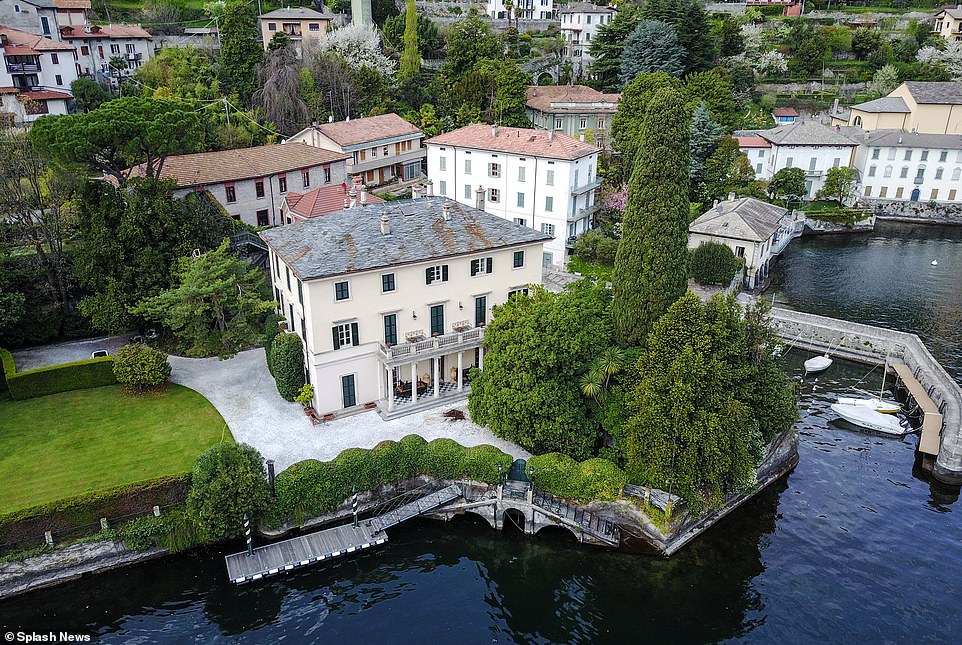 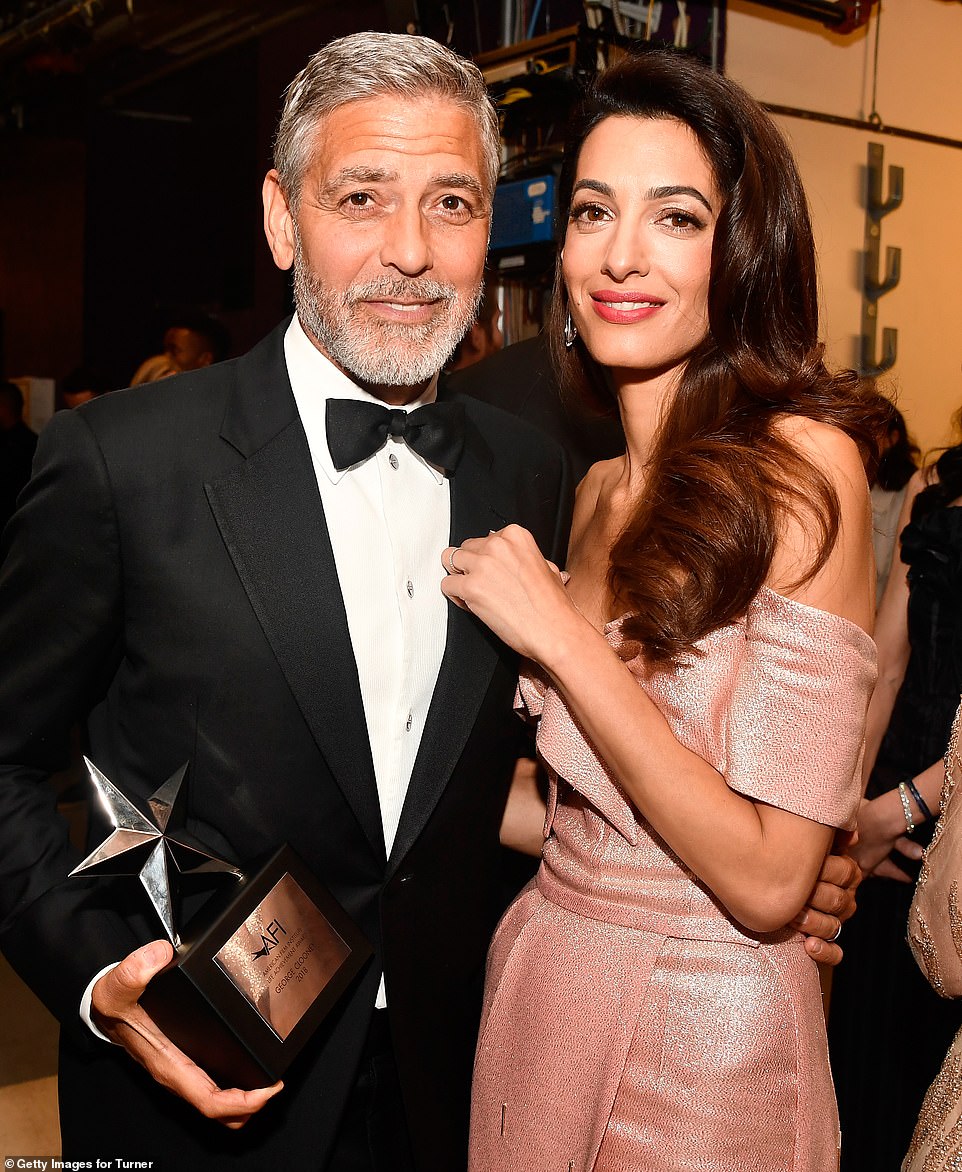 And it seems the high-profile group did everything they possibly could to ensure they had the safest stay possible – and away from the limelight.

‘To maximize security, the group stayed in every night, well fed by rotating chefs,’ the authors claim. 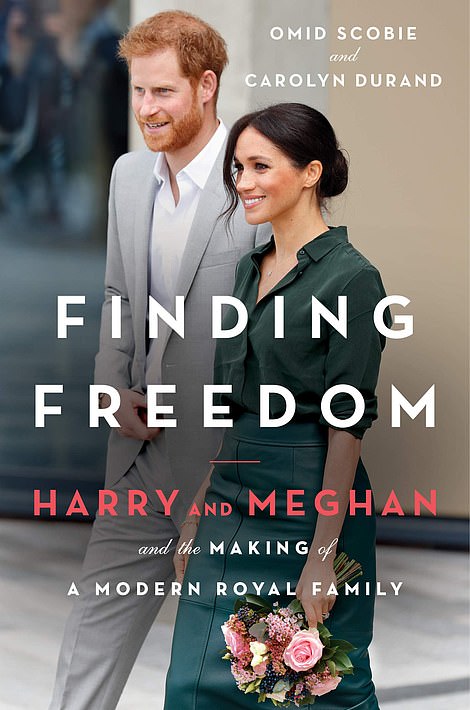 ‘On the final night of Harry and Meghan’s stay, George hired the chef from Il Gatto Nero, one of his favorite local restaurants, to prepare an Italian feast for fifteen.

‘The party, including neighbors and their house guests, dined at long trestle tables in the landscaped gardens.

‘As live music echoed over the estate, guests enjoyed the gathering until the early hours.’

The book goes on to claim that Prince Harry and the Hollywood actor had been friends for a long time before the royal met Meghan Markle and had first connected at a charity event.

‘The two men discovered that despite their age difference, they had a lot in common, including their love of motorbikes,’ according to the authors. ‘George had collections of bikes in Lake Como, LA, and Sonning.’

And apparently it wasn’t the first time the Hollywood power couple had hosted Prince Harry and the former Suits actress.

‘On at least two occasions, George and Amal hosted Harry and Meghan in Sonnong, which was about an hour from the Great Tew Estate the royals rented in Oxfordshure,’ the authors allege.

‘Harry and Meghan brought their dogs with them to the house, where the Clooneys loved to take friends out by the lake.

‘There, they had a secluded decked area and inside was a lounge decorated with traditional club wood paneling, heavy drapes, dark velvets, plush chairs, and a bar.’ 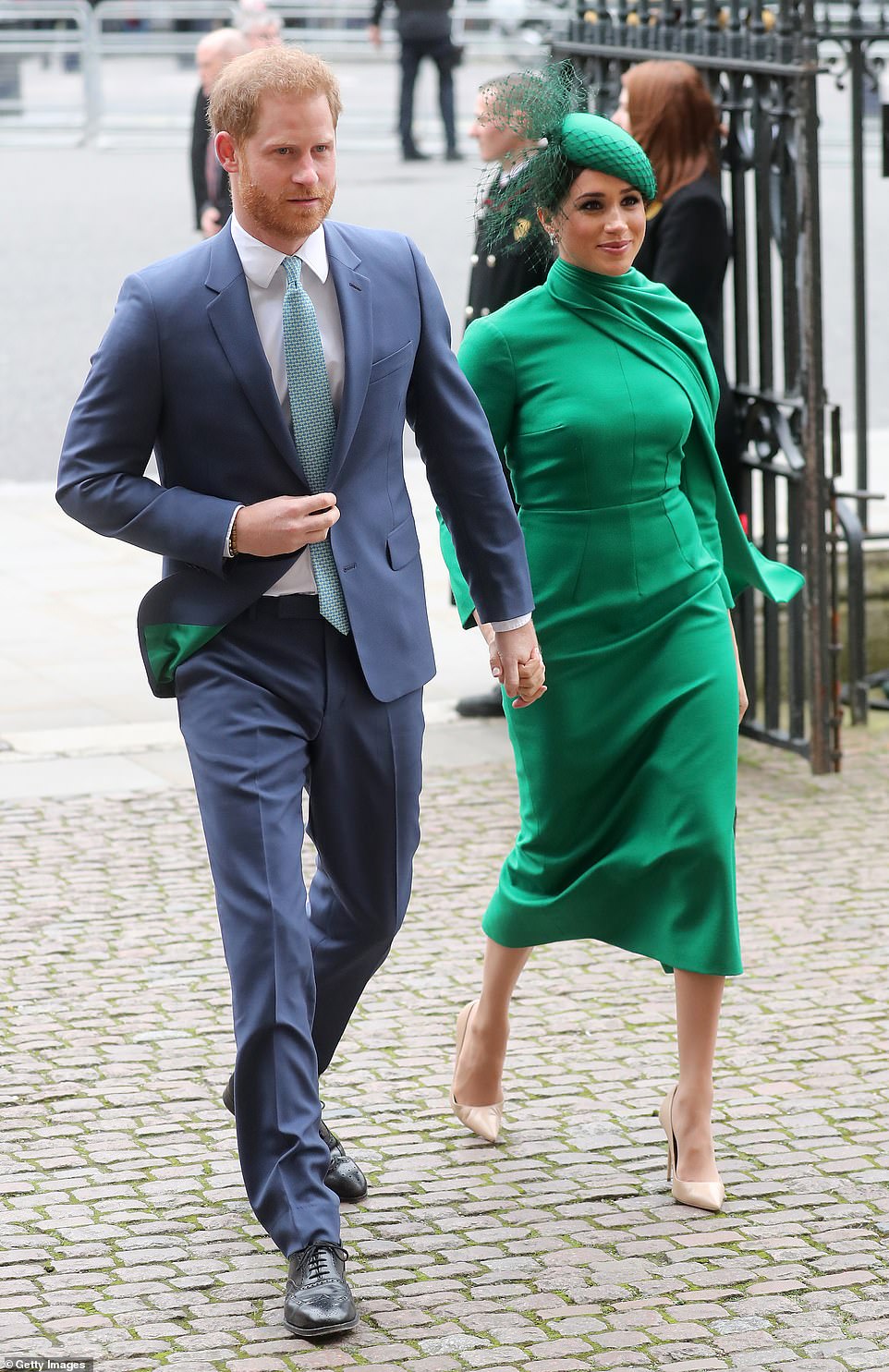 Pictured, the Duke and Duchess of Sussex attend the Commonwealth Day Service 2020 on March 9, 2020 in London 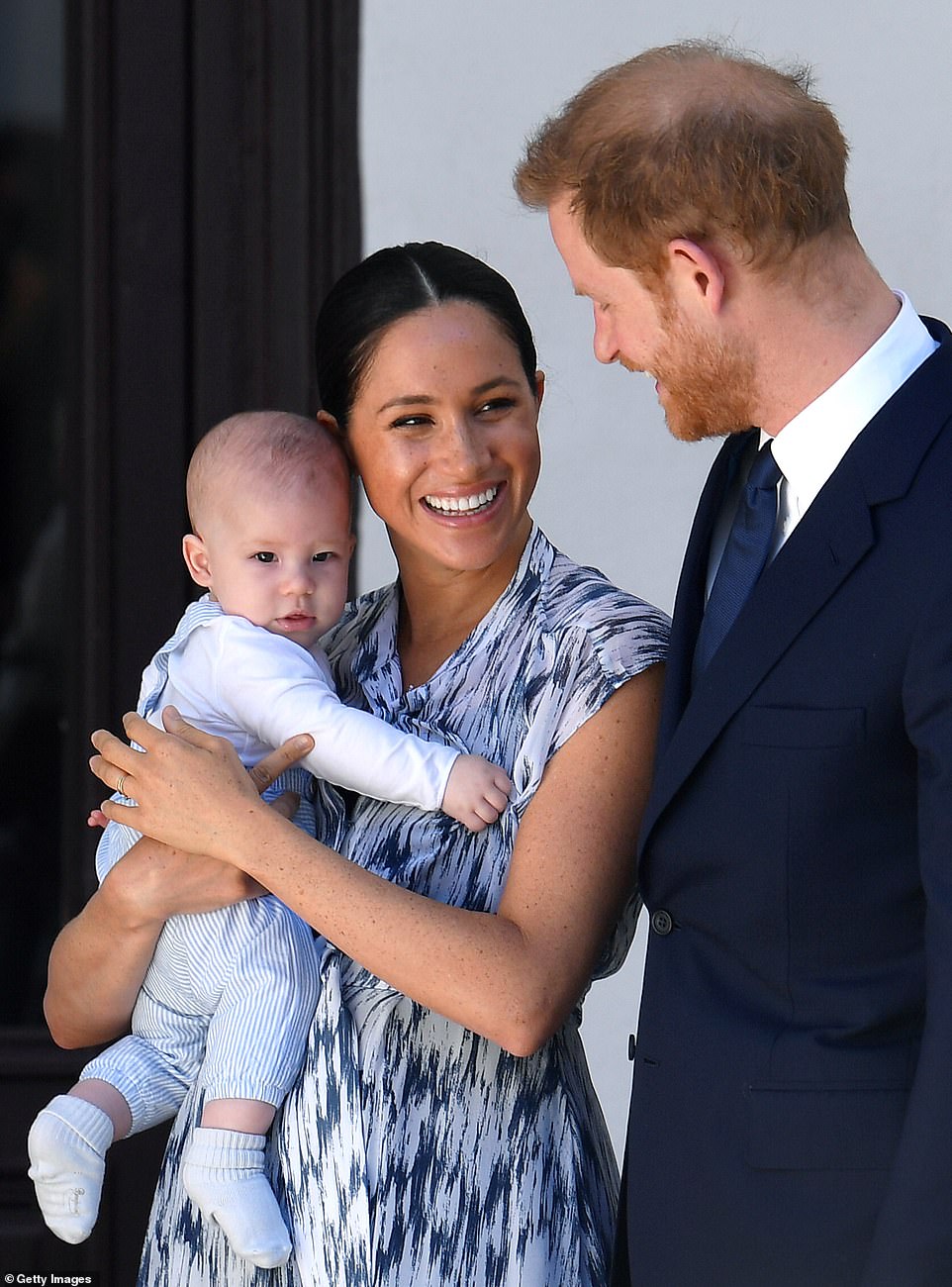 Hollywood heartthrob George is said to have danced with Meghan at the reception. Pictured, the Duke and Duchess of Sussex with son Archie during their royal tour of South Africa on September 25, 2019 in Cape Town 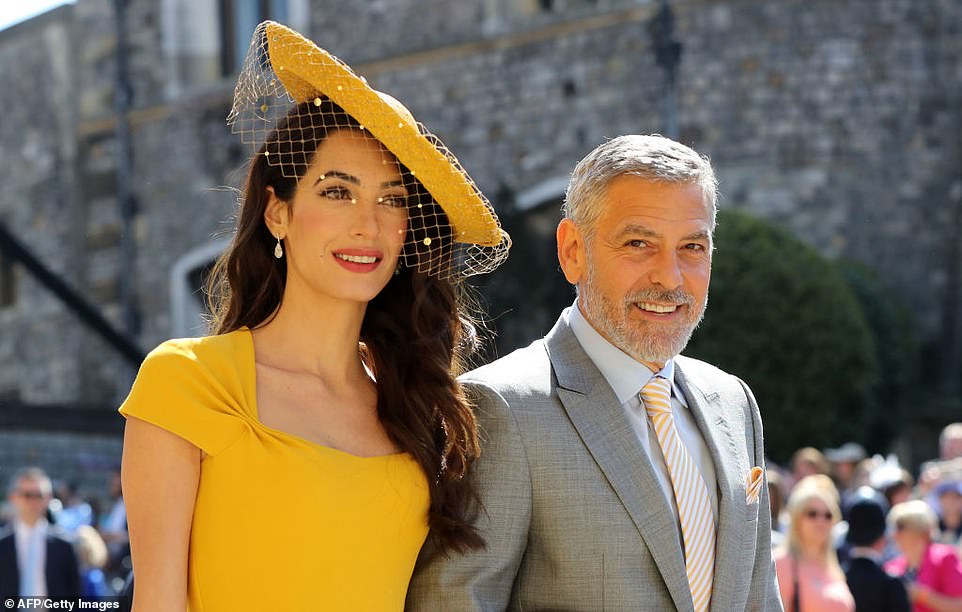 Amal Clooney and US actor George Clooney arrive for the wedding ceremony of Britain’s Prince Harry, Duke of Sussex and US actress Meghan Markle at St George’s Chapel, Windsor Castle, in Windsor, on May 19, 2018

The Duke and Duchess and the Clooneys are understood to be close friends and Meghan and Amal are both said to use celebrity stylist Miguel Perez.

The Clooneys were among the 200 guests who partied the night away at Frogmore House to celebrate the Duke and Duchess of Sussex’s wedding earlier this year.

Hollywood heartthrob George is said to have danced with Meghan at the reception.

Lake Como is known for its expensive celebrity homes and one of Clooney’s neighbors is celebrity fashion designer Donatella Versace.

The presence of the A-lsit actor led to the local council approving an ad hoc regulation to protect Hollywood star’s privacy.

George is known for sharing his multiple luxury homes around the world with friends during special occasions.

Finding Freedom provides an intimately detailed and personalised version of the events leading up to the Sussexes’ dramatic departure from royal life, with co-authors Scobie and Durand insisting ‘all information in this book has at least two sources’.

How Harry and Meghan cultivated a VERY starry lifestyle (even before they left the royal family): Biography offers details on jaunts on Sir Elton’s private jet, gifts from Oprah Winfrey and meetings with the Obamas 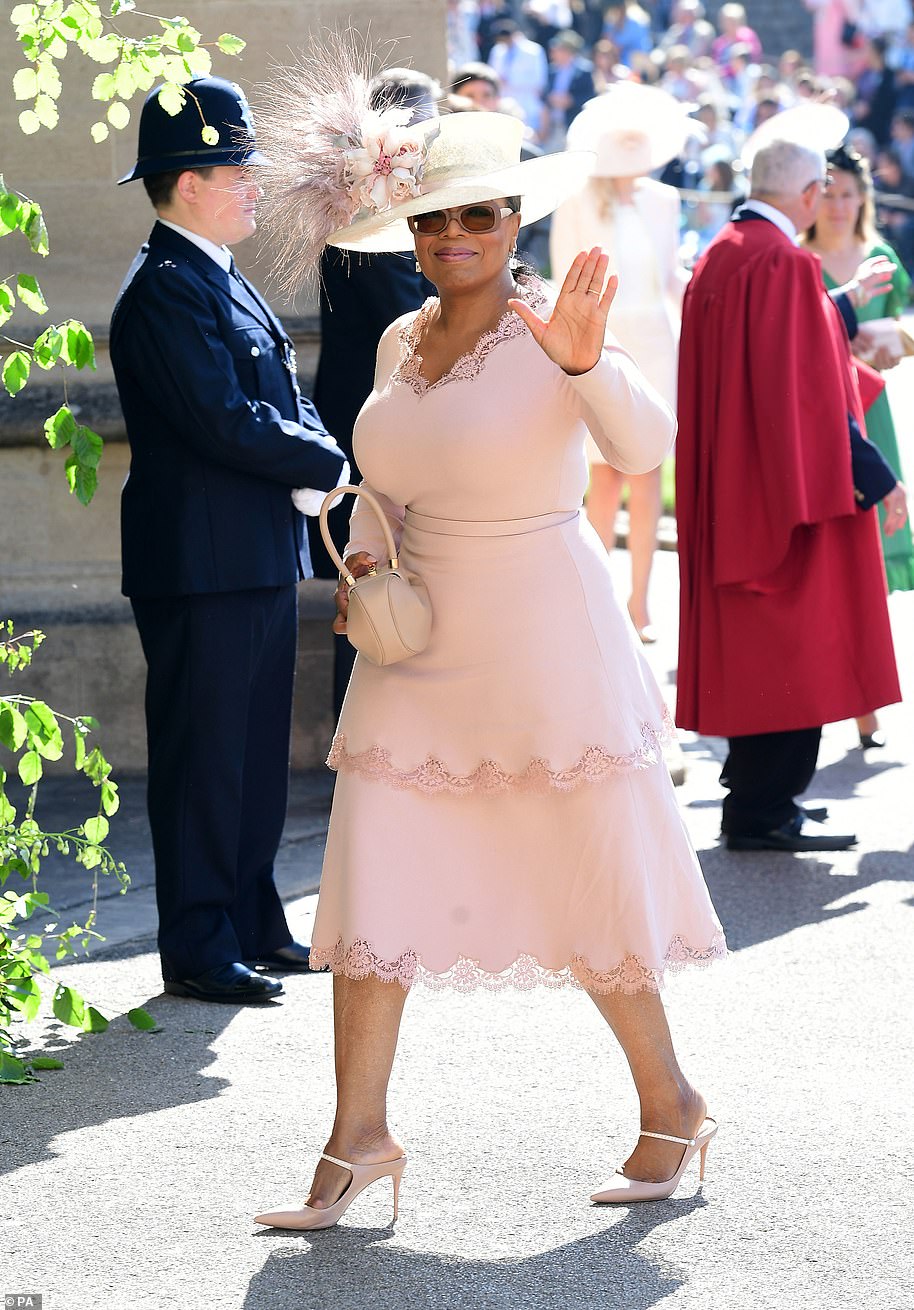 Oprah Winfrey arriving at St George’s Chapel at Windsor Castle for the wedding of Meghan Markle and Prince Harry. Kensington Palace previously announced the Duke of Sussex has co-created and produced a mental health documentary series with the US talk show host

Following Archie’s birth on 6 May 2019, the authors claim that gifts poured into Frogmore cottage – where the couple were staying.

‘Their home, particularly their kitchen, was filled with flowers from around the world: the Clooneys, the Cordens, and New Zealand prime minister Jacinda Ardern all sent arrangements,’ the book alleges.

The authors went on to say that one of the young royal’s first ever storybooks was The Giving Tree, by Shel Silverstein, which was one of Meghan’s favorite’s because it was read to her by Doria when she was growing up.

‘The Mulroneys sent a top-of-the-line bassinet stroller as a gift, which Meghan used to take Archie on walks around the grounds of Frogmore every day, dogs Guy and Pula in tow,’ they added.

MEETINGS WITH THE OBAMAS 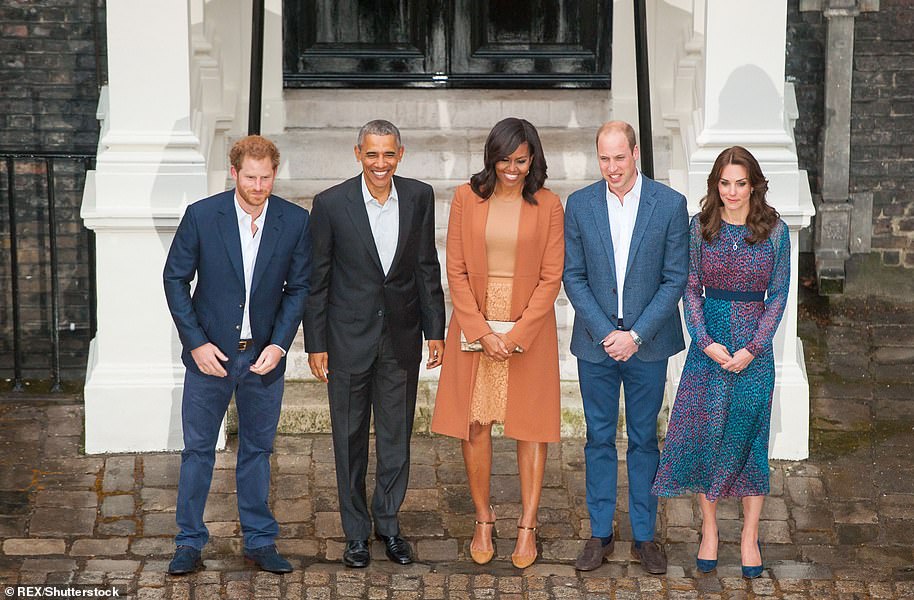 Prince Harry, Barack Obama, Michelle Obama, Prince William and the Duchess of Cambridge pose for a photo in Clock Court, at Kensington Palace, London, as they arrive ahead of a private dinner hosted by the Royal couple in their official residence at the palace US President Barack Obama State visit to Britain om 22 April, 2016

The royal couple are ‘curious’ and ‘open to new ideas,’ according to the authors – and have been offered advice from the likes of Barack and Michelle Obama.

‘They have been advised by leaders in all areas, including the Obamas, who have helped their team network and recommended new people for them to collaborate with,’ Omid and Carolyn claim.

The bombshell biography goes on to allege that more than anything, the Duke and Duchess want to help empower others.

‘To acknowledge, celebrate, and get people to recognize their place in both the world and in the communities around them,’ a source close to Meghan reportedly said. 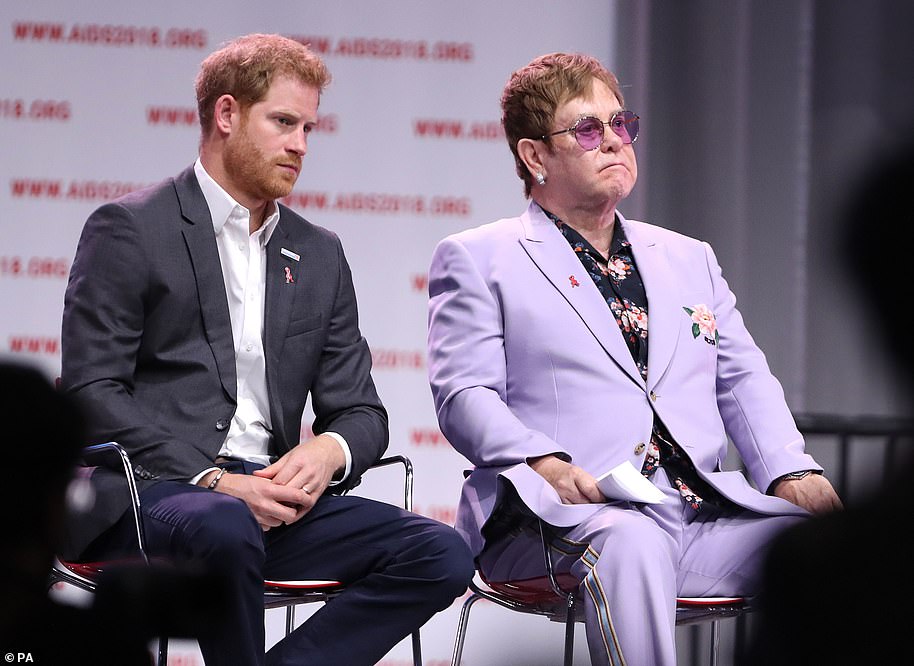 The Duke of Sussex with Sir Elton John during the Aids 2018 summit in Amsterdam, the Netherlands. Sir Elton has said he provided the Duke and Duchess of Sussex with a private jet flight to his home in Nice to give the royal couple a ‘high level of much-needed protection’

After Meghan celebrated her thirty-eighth birthday on August 4, the authors claim she headed from London to Ibiza with Prince Harry and Archie, where they stayed at an ‘upscale gate complex.’

Then, from Ibiza they flew in Elton John’s private jet to the singer’s house which is located in Nice, France – after he had invited them to stay.

‘A firestorm erupted over the so-called hypocrisy of the prince, seemingly touting the virtues of conservation while flying on gas-guzzling private jets,’ the author claims.

‘Not to mention the fact that the Sussexes had decided against a trip to visit the Queen at Balmoral with Archie earlier in the summer, reportedly saying that in fact was too young for the reveal. Some of the press latched on to this, calling it a snub instead.’

However, Elton John quickly interjected and took to Instagram and penned: ‘I am deeply distressed by today’s distorted and malicious account in the press surrounding the Duke and Duchess of Sussex’s private stay at my home in Nice last week.

‘Prince Harry’s Mother, Diana Princess of Wales was one of my dearest friends. I feel a profound sense of obligation to protect Harry and his family from the unnecessary press intrusion that contributed to Diana’s untimely death.

‘After a hectic year continuing their hard work and dedication to charity, David and I wanted the young family to have a private holiday inside the safety and tranquillity of our home.

‘To maintain a high level of much-needed protection, we provided them with a private jet flight. To support Prince Harry’s commitment to the environment, we ensured their flight was carbon neutral, by making the appropriate contribution to Carbon Footprint™.

‘I highly respect and applaud both Harry and Meghan’s commitment to charity and I’m calling on the press to cease these relentless and untrue assassinations on their character that are spuriously crafted on an almost daily basis.’

According to the authors, as the controversy reached its climax just days before the launch of his sustainable-tourism initiative, Harry ‘regretted’ not following the advice of Sara.

‘She had warned him against a potential media storm if he flew back on a private jet from Google Camp, which he attended to preview Travalst,’ they claim. ‘The earnest prince was the first one to admit when he made a mistake.’