Home » Lifestyle » I'm a CEO, I won't apologise if my children interrupt our Zoom meeting

I'm a CEO, I won't apologise if my children interrupt our Zoom meeting

A CEO refuses to tell her children to be quiet during her work from home meetings and says despite dealing with international investors her ‘kids come first’.

Chloe Sweden, 41, from Hertfordshire, is the CEO and founder of PLANTS + PERKS, a business that encourages a more sustainable approach to work, encouraging employees and companies to retain healthy and eco-friendly habits by connecting them with ethical brands via their app.

Although she has her own office space, as a mother of two children aged nine and seven, Chloe does a lot of her work from home and recently took to LinkedIn to defend them interrupting her Zoom calls.

It comes as a new law was announced this week stating that employees will ‘have the right to ask to work from home’. 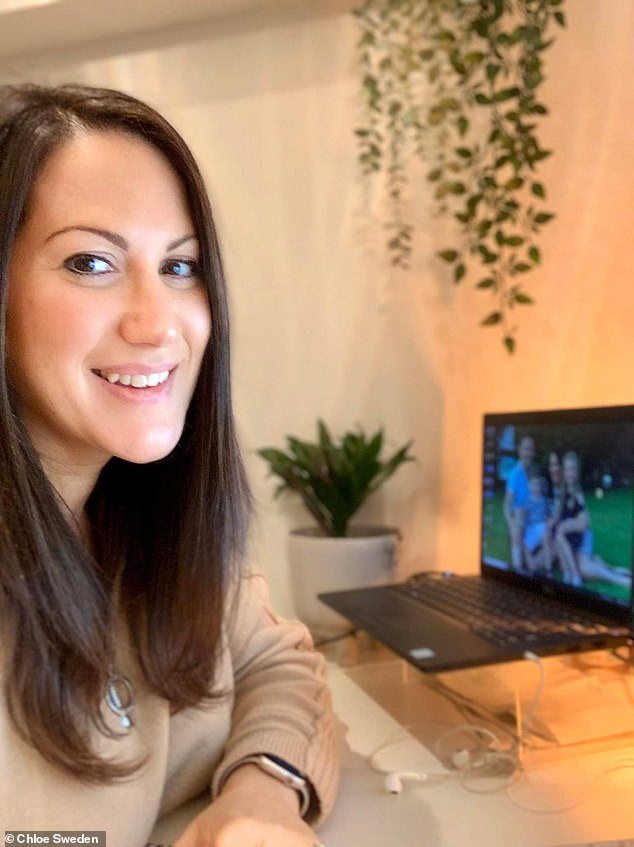 The PLANTS + PERKS founder said ‘For the sake of losing a few minutes in a meeting I think it’s worth the sacrifice, as they are young enough to care’ 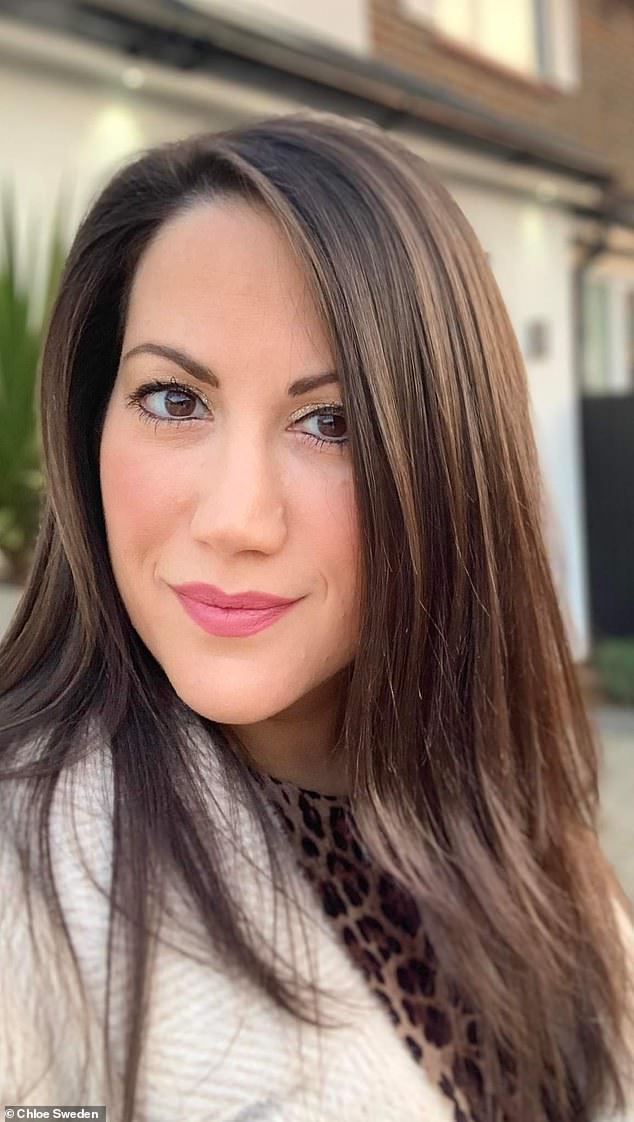 Recently she posted to LinkedIn saying she will not ‘say sorry’ if her children stumble into a zoom meeting and divided opinion.

Explaining her position, Chloe wrote: ‘If you have a meeting with me at 4pm on weekdays our meeting will be interrupted by my children who will storm into my office, excitedly telling me how their day was and not in any way caring who the other person on the Zoom call is.

‘I will not apologise to you. I will not tell them off. I will listen to them until they breathlessly finish, kiss their heads and send them off to decompress in front of the TV.

‘I will mute myself if energetic kids aren’t your thing – but I will not say sorry. 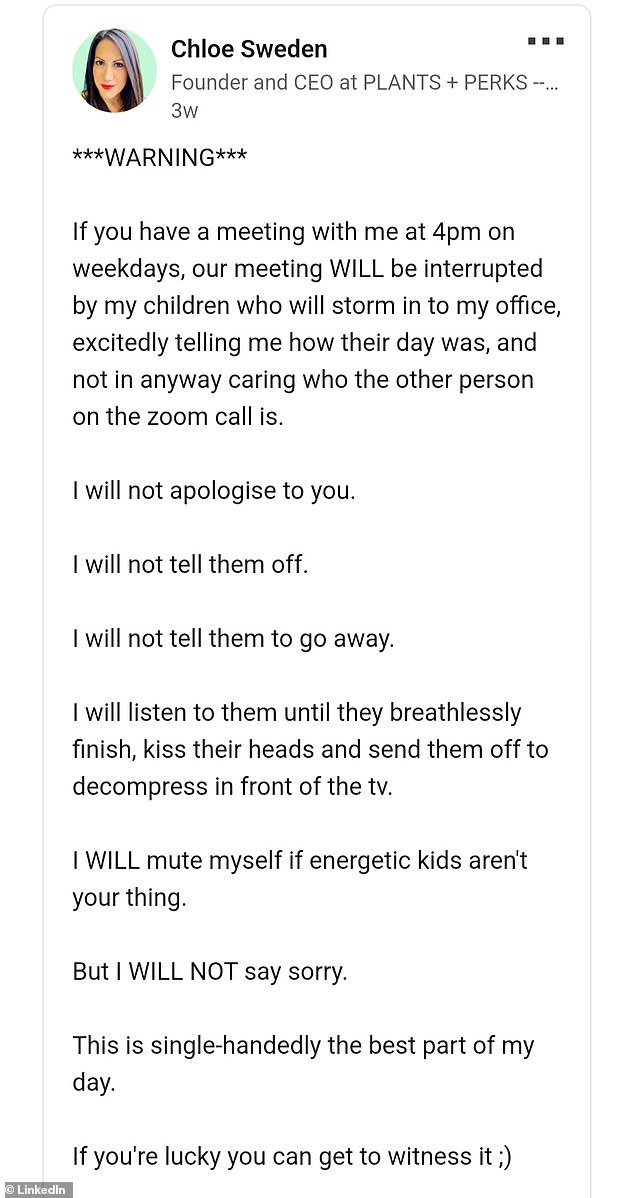 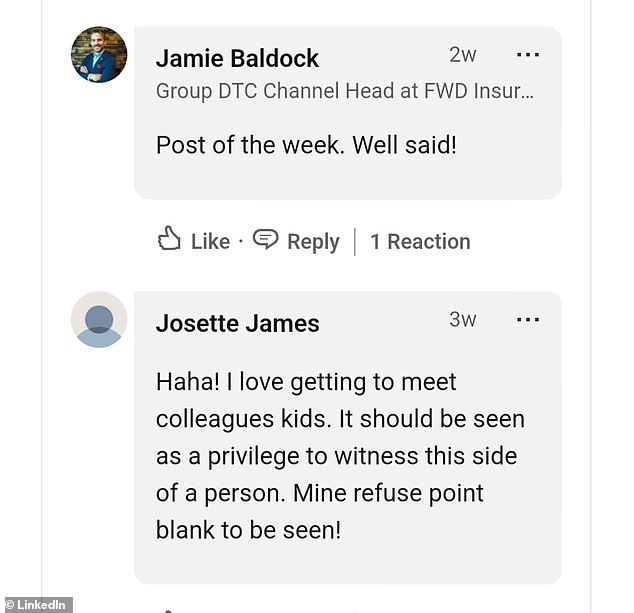 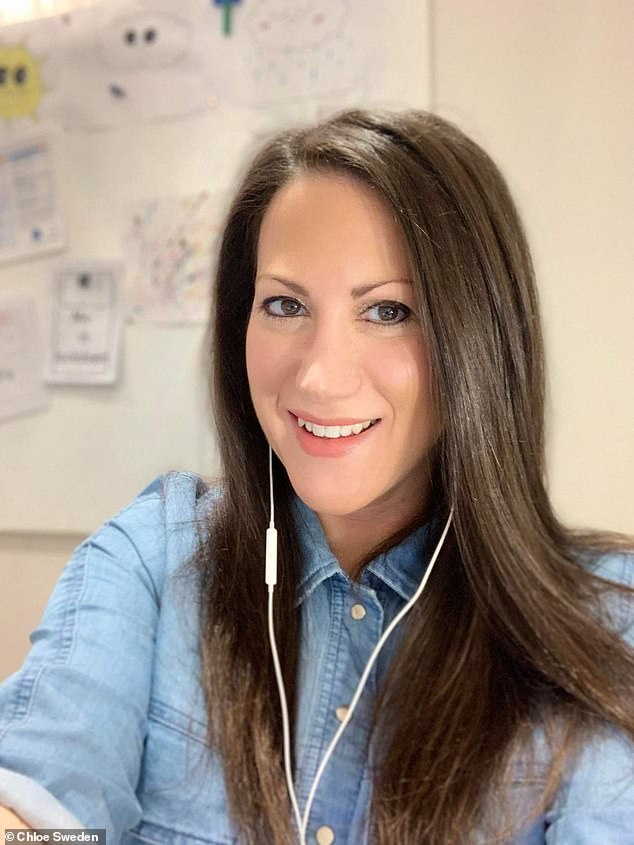 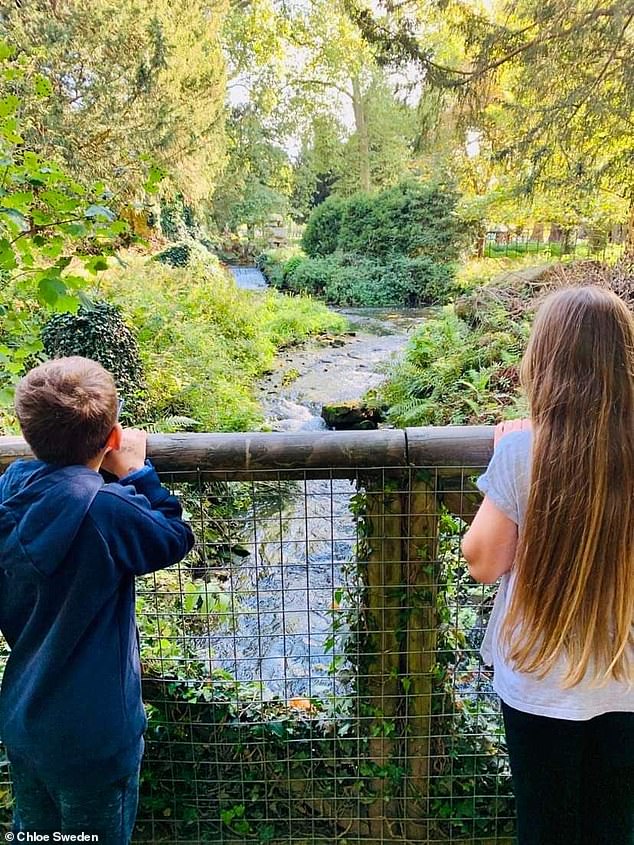 If the children, aged nine and seven, come bursting into their mother’s office to tell them about their day – Chloe will patiently listen before allowing them to decompress after school

‘This is the best part of my day and you are lucky if you get to witness it.’

People on the platform crowded to applaud the mother-of-two for her approach saying: ‘Post of the week well said!’

Another added: ‘Love this! I think times have changed and people are more accepting.’

Others shared their own accolades, with one person admitting their pet kitten walked across their keyboard during a recent webinar.

However, despite largely positive feedback, Chloe’s post was met with criticism from some, who suggested she ‘lets her children walk all over her’.

Chloe told FEMAIL: ‘I want my children to know that their mummy works and are proud of all the hours I put in to building a successful business to help others live more sustainable lives.

‘I also want them to know that their needs and wants are more important to me, and when they walk through the door bubbling with all the things they want to tell me that it’s more pertinent than any conversation I’m having.’ 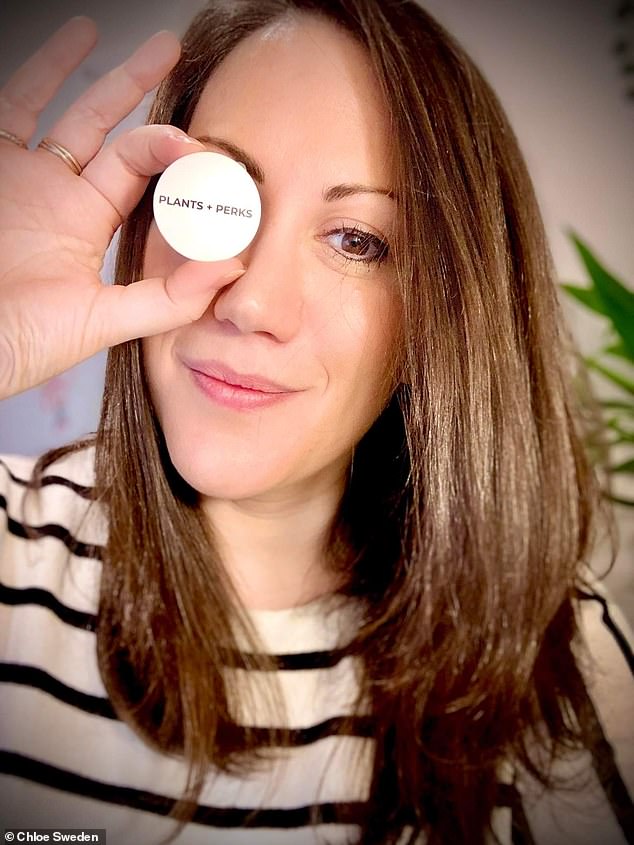 The mother of two is the CEO and founder of plantsandperks.com, a business that encourages a more sustainable approach to work, encouraging employees and companies to retain healthy and eco-friendly habits

Chloe’s company is currently embarking on a scheme to raise £1million and the conversations she is having with investors over Zoom are of the utmost importance, but the CEO says her children still come first.

The businesswoman revealed: ‘I want our investors to know that they are speaking to a woman who can run a company and raise a happy, healthy family.’

She added: ‘I had a few comments on my post that suggested I’m the kind of mother that lets my kids walk all over me and that couldn’t be further from the truth.

‘In a few short years I won’t know how their day was as they will head straight upstairs and slam the door – or go and put their music on loudly.’

Chloe says she does make a lot of her meetings earlier in the day, but the time difference when dealing with US clients and investors means it’s not always possible.

She said: ‘For the sake of losing a few minutes in a meeting I think it’s worth the sacrifice, because they are young enough to care.’

Home working has increased as a result of the pandemic, and many office employees stipulate they find a better work life balance desirable. During lockdown it was shown that people working from their home offices spent an hour or more working compared with those commuting.

Not all bosses are happy however, with Zoom’s own CEO Eric Yuan,51 claimed even he was getting ‘virtual fatigue’ with Zoom meetings last year.

Yuan said he was keen to get workers back into the office – but for people like Chloe, she would rather build her business and her bond with her children.

If you enjoyed this story…

Also, a fitness model reveals how she’s been trolled by critics for her unusual parenting style.

And an accountant has been branded a ‘drain on society’ after working just 11 months in five years due to three periods of maternity leave.