Home » Lifestyle » I made Rachel Green’s meat trifle using the official ‘Friends’ cookbook recipe, and it was surprisingly good

I made Rachel Green’s meat trifle using the official ‘Friends’ cookbook recipe, and it was surprisingly good 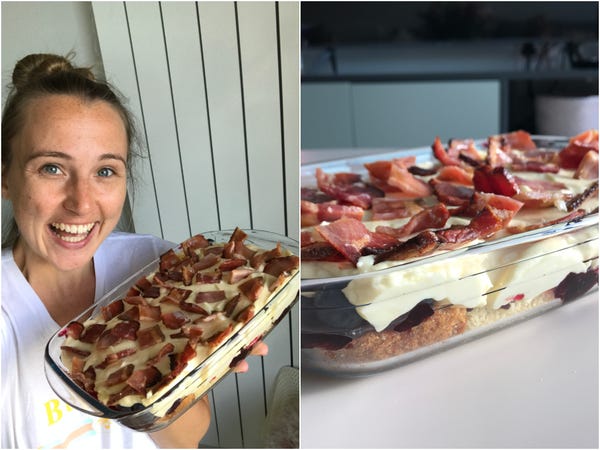 In news that has delighted "Friends" fans the world over, an official cookbook filled with recipes inspired by the beloved sitcom is being released on September 22.

And when it comes to iconic foods from the series, it's hard to top Rachel's notorious meat trifle.

"It's a trifle," she said of her Thanksgiving dessert. "It's got all these layers. First, there's a layer of ladyfingers, then jam, then custard, which I made from scratch, then raspberries, more ladyfingers.

"Then beef sautéed with peas and onions, then a little bit more custard, then bananas and then I put whipped cream on top."

Poor Rachel was not supposed to put meat in the trifle, but the pages of the cookbook were stuck together so she made half an English trifle and half a shepherd's pie.

Slightly disappointingly, depending on your viewpoint, the recipe in "The Official 'Friends' Cookbook" features no beef sautéed with peas and onions. It's a trifle inspired by Rachel's, in that it includes meat in the form of bacon, but it's not the one from the series.

I love trifle normally, but this one, with candied bacon and a lemon cream, is far from classic. I appreciate a salty-sweet mish-mash but wasn't expecting huge things from this recipe — however, I was pleasantly surprised. It was good!

The recipe called for six slices of thick-cut applewood-smoked bacon, which I laid out on a baking rack after preheating the oven to 350°F. 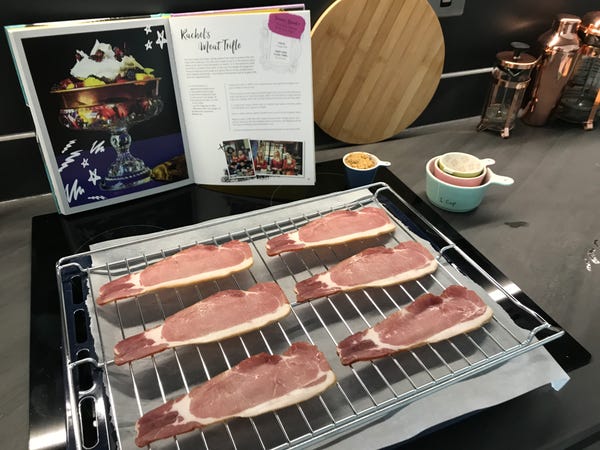 I coated the bacon with brown sugar before putting it into the oven until the bacon turned crispy and the sugar was caramelized. In the meantime, I carried on with the other elements of the trifle. 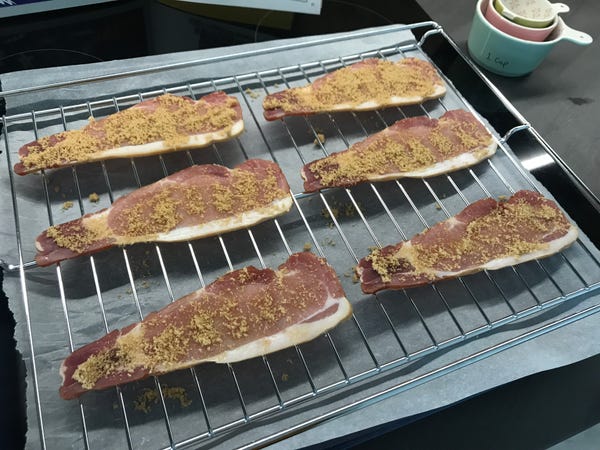 Lacking a pretty glass serving bowl, I made do with this dish. The recipe calls for a layer of pound cake, but here in the UK that isn't a thing. Instead, I used Madeira cake, which is a pretty similar plain sponge. 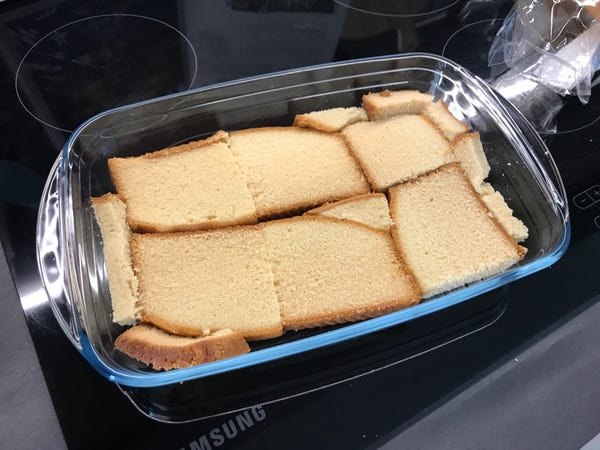 Next up, I was meant to cover the cake in blackberry mint jam. There's a recipe for it in the cookbook, but I was too lazy to make my own so made do with the closest store-bought offering. 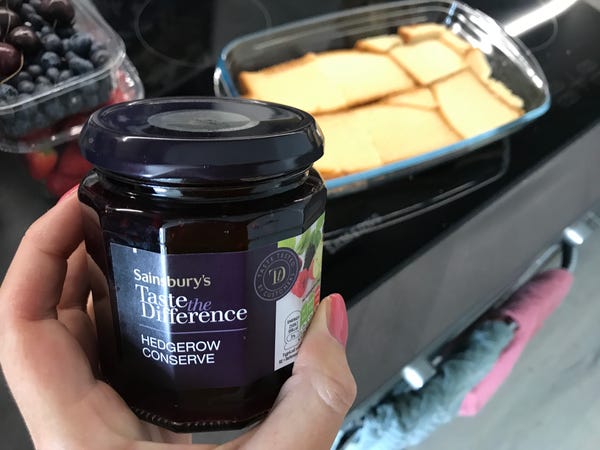 I slathered a generous layer over the cake. 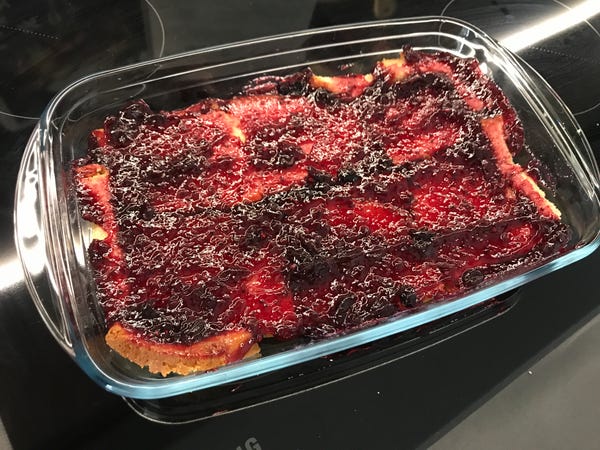 Then it was time for a layer of strawberries and blueberries — in hindsight, I should've added more. 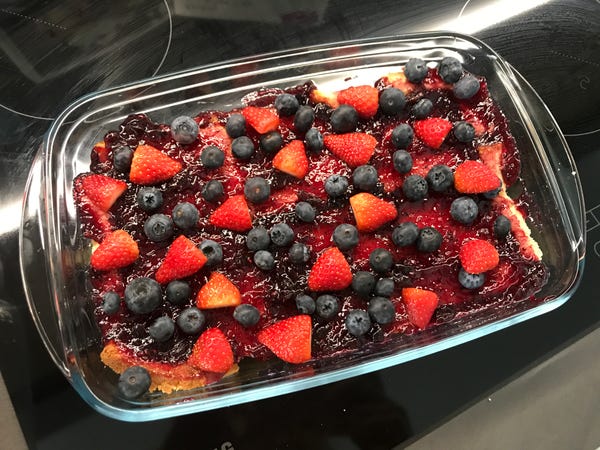 I also had a little bit of cake left so decided to put my own spin on the recipe by sprinkling it over the berries. 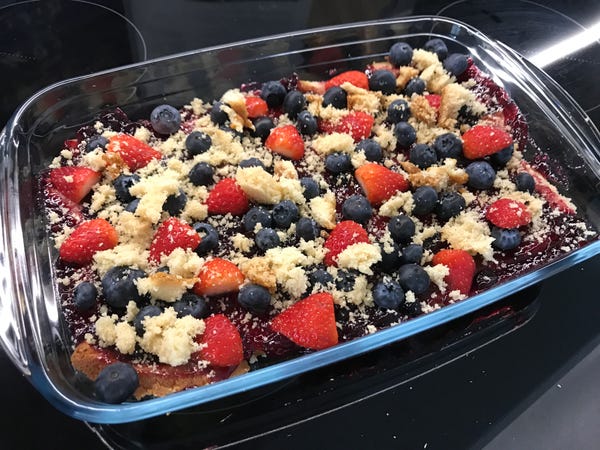 It was soon time for the candied bacon to come out of the oven, and my goodness, it smelled amazing. 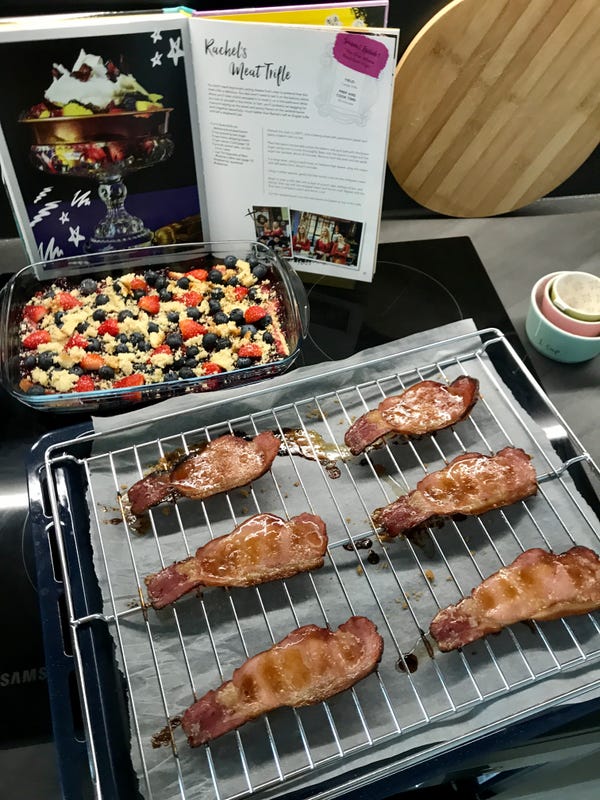 I let the bacon cool, then used scissors to chop it up into small pieces. 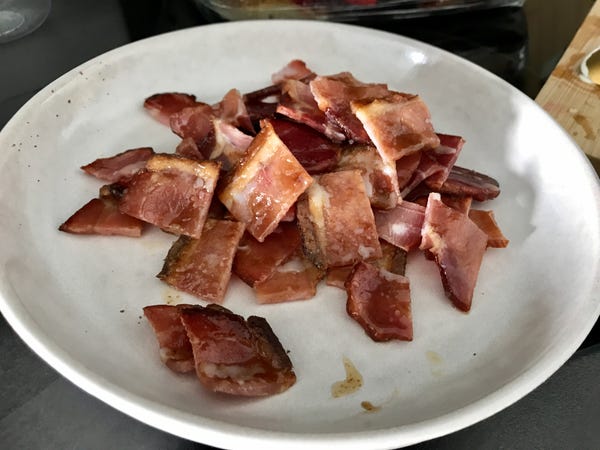 Then it was on to the cream. We don't have "heavy whipping cream" as such over in the UK, but I used double cream which worked just as well. 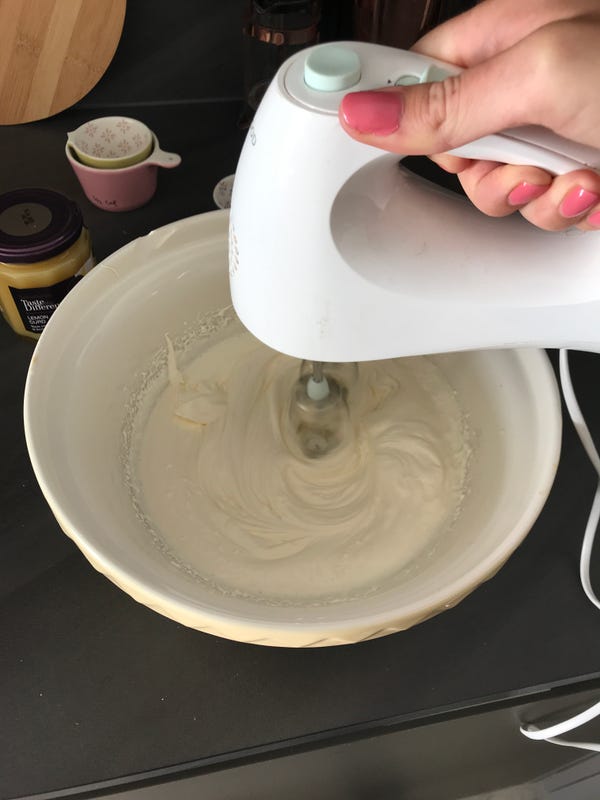 I whisked for about five minutes until it was thick and stiff. 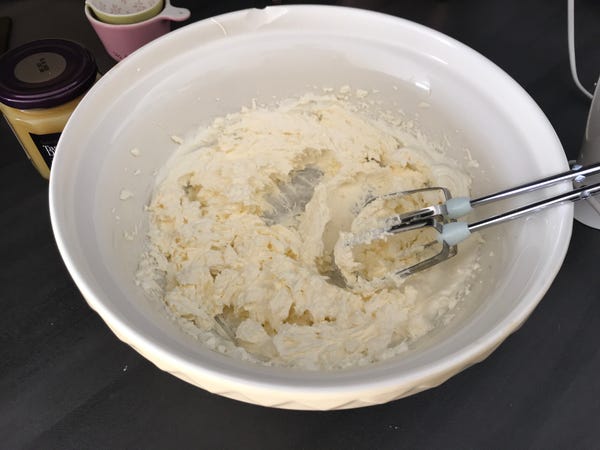 Then it was time to fold in the lemon curd — the recipe called for three cups, which is a lot. I just used the jar that I had, and it seemed like a good balance to me. I dolloped the lemon cream on top of the trifle … 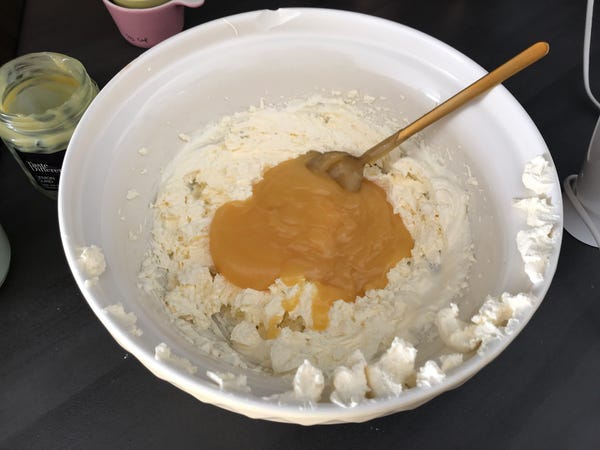 … before finishing it off with the candied bacon shards. 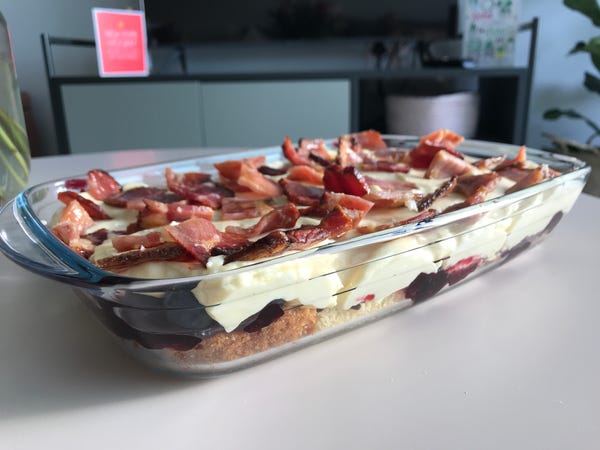 It didn't look particularly appetizing to me, but that could be because I'm not wild about bacon (it's a texture thing). 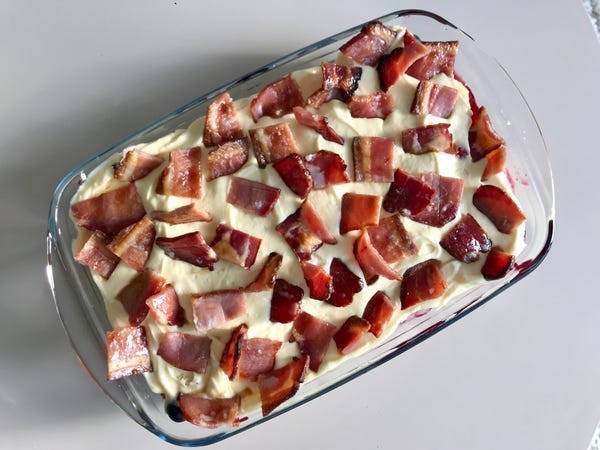 But the question is, how did it taste? Answer: surprisingly good. 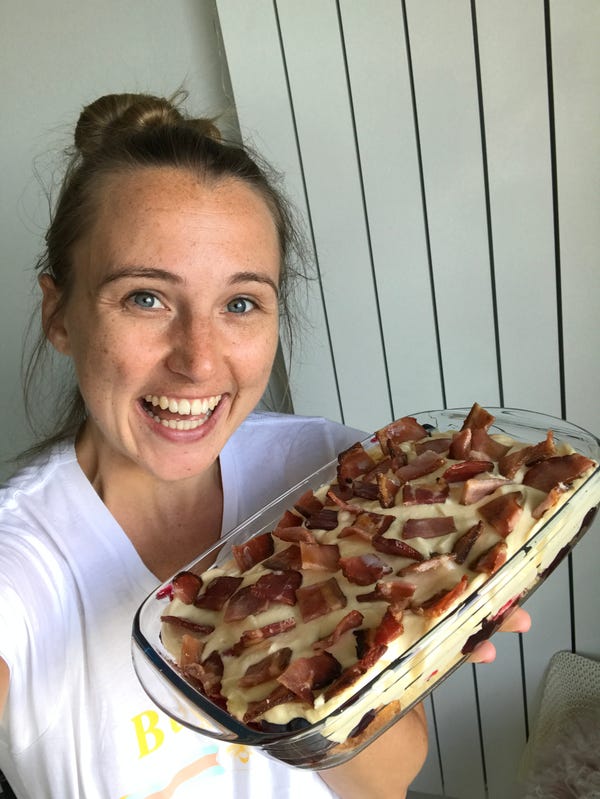 The tangy lemon went beautifully with the salty-sweet bacon, and the textures were great together. 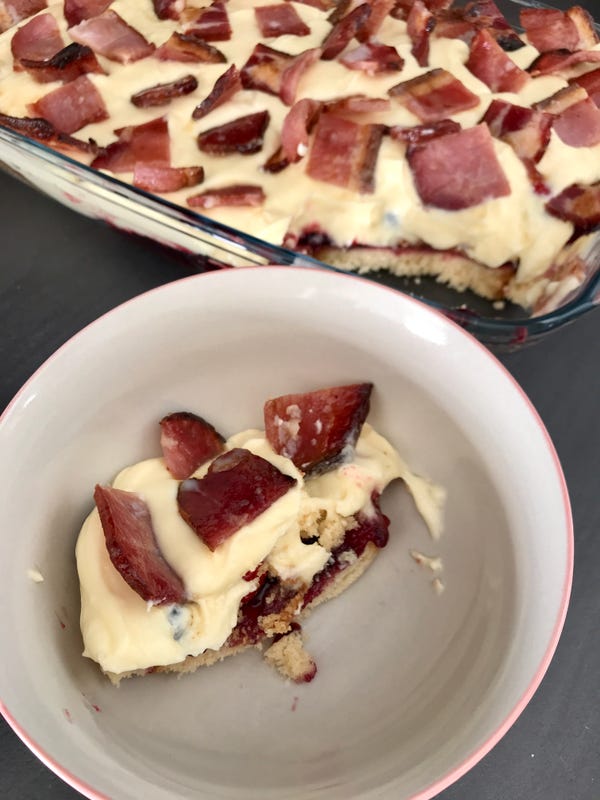 It was probably a bit bacon-heavy for my tastes, and if I made it again I'd add more fruit. But overall, it was really tasty! 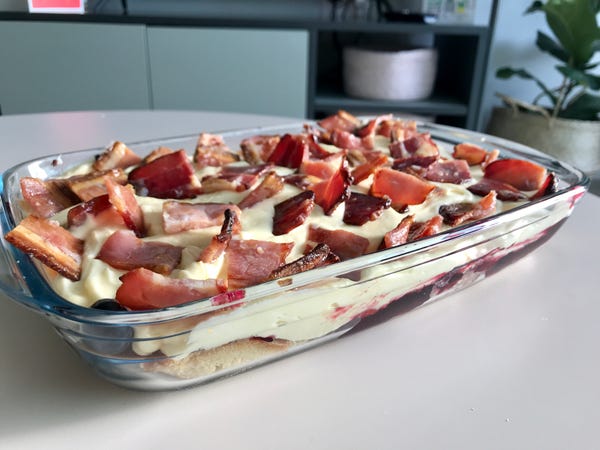 Rachel may have been on to something with her meat trifle after all. It's rich, but not too heavy, and it's anything but bland.

The meat trifle may not be to everyone's tastes, but bacon fans with a sweet tooth will no doubt love it.

I'd make the trifle again for a fun and different dessert.

Related posts:
How to live longer: A plant which improves memory, helps with ageing and boosts longevity
Kourtney Kardashian Rocks Pink Bikini During Fun Boat Ride With Scott Disick & Their Son Reign, 6
Popular News
Barack Obama Shares His Phone Number and Invites Fans to Text Him
25/09/2020
Man Utd wonderkid Ramon Calliste, called ‘the next Giggs’, now owns luxury watch business and makes £5m a year – The Sun
26/03/2020
Megan Thee Stallion Addresses Criticism Over Twerking: ‘I Love to Shake My A**’
26/03/2020
Police guard shops to stop coronavirus panic-buyers and enforce social distancing – The Sun
26/03/2020
Coronavirus: Good Morning Britain’s Dr Hilary reveals ‘game-changing’ self-testing kit
26/03/2020
Recent Posts
This website uses cookies to improve your user experience and to provide you with advertisements that are relevant to your interests. By continuing to browse the site you are agreeing to our use of cookies.Ok