SPOILER ALERT: This article contains major plot details from season 4, including the finale

I don’t know what’s wrong with me, but no matter how terrible I find it, I keep going back to The Handmaid’s Tale. Maybe it’s some sort of televisual Stockholm syndrome: I’ve spent so much time held hostage to its narrative abuses I just don’t know how to break free any more.

I could have sworn I was done with it at the end of season two, when June (Elisabeth Moss) defied logic and opted to stay in Gilead when the opportunity to escape presented itself. (Yes, I know all the reasons some people felt that choice made sense, but it didn’t. And if it did, why did she finally leave this season when exactly the same situation prevailed … hmm?) 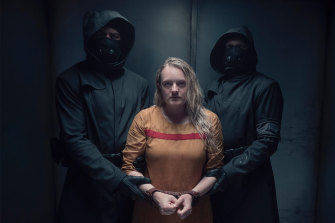 June (Elisabeth Moss) once again falls into the hands of Gilead in season four of The Handmaid’s Tale. Credit:SBS

The endless beatings and humiliations of the women became unbearable (and often felt gratuitous, in season two especially); the emotional torture and manipulation were almost worse; the show’s fascination with the shapes, colours and movements of mass gatherings worryingly in thrall to the aesthetics of the fascism it was ostensibly denouncing. And yet, I kept watching.

Season three culminated with the utterly implausible mass evacuation of children and Marthas, with June and a bunch of others fending off machine guns and armoured vehicles at the airport with a pile of rocks and the tactics of a bunch of meerkats (bob up, duck down; bob up, duck down: simples).

Not even being mown down by bullets could stop her. Borne aloft by yet another artful grouping of red-clad women, while the words of Exodus ran in her mind – “I am come down to deliver them out of the hand of the Egyptians, and to bring them … unto a land flowing with milk and honey” – June’s transformation from handmaid to superhero was utterly complete. 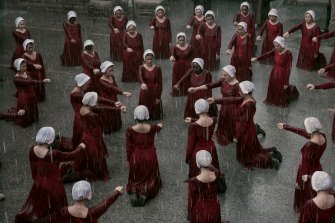 The show continues to be fascinated with the aesthetics of mass gatherings.Credit:SBS

This season, the TV viewing figures are down, in line with free-to-air audiences generally – the finale on Thursday was watched by around 163,000 people nationally – but on-demand figures are through the roof with Home, the episode that aired on May 27, picking up another 573,000 BVOD views in the not-quite 28 days since. Wilderness, the finale in the 10-episode season, has already had 420,000 more views online since airing last Thursday.

This season almost redeemed the show. Getting out of Gilead didn’t just offer hope to June and her fellow runaways, it allowed for storylines outside the cycle of transgression-punishment-reprieve-transgression that defines a handmaid’s dreadful existence in this woman-hating theocratic military state. Praise be. May the storylines open.

There were some false steps along the way – June simply abandoning Janine (Madeline Brewer) to her fate after the bombing of Chicago was a shocker; and while Bradley Whitford is engrossing, the lack of consistency in his Commander Lawrence infuriates me – but exile invigorated the storytelling. Suddenly we had June (and Moira and Emily and Rita) dealing with PTSD, wrestling with a compromised legal system, giving in to violent revenge fantasies – which in turn gave way to violent revenge realities. The conflicting emotions here, the sense of no longer knowing where they belonged, of not being able to fully connect with those who had not shared their experiences, felt real (I especially liked the throwaway reference to those among the rescued kids who wanted to go back to Gilead – now there’s some Stockholm syndrome for you).

But that ending… I don’t know. Not for the first time, it felt like The Handmaid’s Tale threw logic and feasibility to the wind as it went in search of an ending designed to draw us back for more. Season one had June in the back of a van, headed to who knew what fate. It felt truthful, and terrifying. Season two had her refusing to get in the back of a van, and it felt bogus.

At the end of season three she should have been dead, but of course she wasn’t. Bleeding from a wound in her side but seemingly immortal, she was spirited out of the woods having saved the little children through her suffering. Christ, it’s June the redeemer.

Now, at the end of season four, it’s vengeful June, a woman revelling in the ability to inflict pain on those who have wronged her, and others. Earlier in the season she encouraged the 14-year-old wife Esther (Mckenna Grace) to gut a man who had raped her; mid-season she murdered the top man in Gilead in a brothel (how she happened to be there, how she managed to overcome him, how she got away with it all fall on the “what the…” side of the storytelling ledger). Now, at season’s end, she led a furious attack on Fred Waterford (Joseph Fiennes) in the woods, the scene of her capture in season one.

They laid their lamps upon the ground – in a perfectly arranged circle, of course – and with fist and claw, stone and wood, they beat him to a pulp. Then one of them (presumably June) severed his finger and sent it, with wedding ring, to Serena in Canada.

It was revenge, and at some level it was undeniably sweet. But the plot contrivances and leaps of illogic required to make it happen left a sickly feeling in the mouth.

So that’s it. I’m done with The Handmaid’s Tale. I won’t be watching the show again. Not until next season anyway.