A talented home cook has taken the internet by storm with her simple slow cooker recipe for vanilla slice – inspiring thousands of others to make their own versions while isolating at home this Easter.

The Australian woman posted on Facebook, where she shared her recipe, and said it’s ‘one of my best yet’.

One of the best things about the slow cooker slice is that it uses many ingredients that you will already have in your freezer and pantry, including milk, butter, egg yolks and cream. 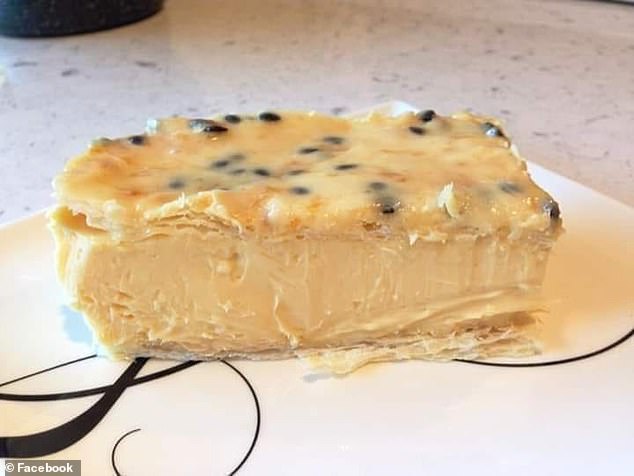 The recipe involves baking two slices of puff pastry in your oven and then whipping up a vanilla slice filling in your slow cooker to layer in between.

Sharing the recipe on Facebook, the woman revealed you’ll need to buy two sheets of ready-made puff pastry, 250ml milk, one vanilla bean or two spoons of vanilla essence, three quarters of a cup of cornflour and half a cup of custard powder.

You’ll also want to get your hands on 220 grams of caster sugar, 50 grams of unsalted butter, 750ml thickened cream and three egg yolks – as well as a little icing sugar to dust on top.

Then, she said, you just need to follow four simple steps to get the ‘best’ vanilla slice she’s ever made.

How to make a slow cooker vanilla slice

* One vanilla bean, split or two teaspoons of essence

Step one: Pre-heat oven to 210 degrees Celsius. Line a 23cm square pan with aluminium foil, so that the foil comes up over the sides (this allows you to lift out the slice).

Step two: Place each pastry sheet on a baking tray lined with non-stick baking paper, then bake for 8-10 minutes or until golden brown. Set aside to cool.

Once cool, place one pastry sheet, cooked-side up, in bottom of pan. (You may need to trim it slightly to fit).

Step three: Set slow cooker on high. Put the cornflour, sugar and custard powder in the slow cooker, and put the milk and vanilla mixture in and whisk until smooth. Then add cream, mix well.

Place lid on slow cooker and let it cook for about one hour or until it thickens, stirring a couple of times in between.

Add butter, stirring well to combine, then remove from heat and whisk in egg yolks, one at a time, until smooth.

Step four: Pour into pastry-lined pan and set aside to cool slightly before placing other piece of pastry, cooked-side up, on top. Refrigerate overnight.

Remove from pan, cut into squares and dust with icing sugar.

Sharing the results of her baking online, the woman was met with a barrage of praise – with many saying it looks ‘absolutely amazing’ and like an ‘absolute feast’.

‘This is so great. And I have all of these ingredients in my pantry!’ one commenter posted.

‘You’ve made my day!’ another added.

How to make savoury bread using a slow cooker 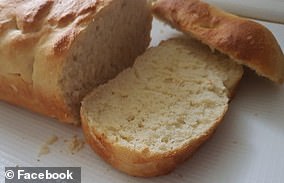 Two and a half cups of self raising flour

A cup and a half of pizza cheese

One cup of diced bacon pieces

2. Mix a cup of milk and a tablespoon of vinegar and let it sit for five to ten minutes to thicken.

3. Mix two and a half cups of self raising flour, two teaspoons of baking powder, herbs, parmesan cheese, a cup and a half of pizza cheese and three tablespoons of minced garlic

4. Mix everything together and then add one cup of diced bacon pieces and three spring onions chopped up.

5. Slowly pour in the milk mix and mix all the ingredients together to create the dough.

6. Spray your slow cooker with oil and line it with baking paper, then place the dough in.

7. Score twice across the top then brush with an egg mixture.

8. Cover top of slow cooker with a tea towel, put lid on and back for 2 and a half hours on high.

9. You can also add more grated cheese and chives on top and brown in oven for 10 minutes once done.

This isn’t the only item home cooks have been making since Australia introduced conronavirus restrictions which mean you can’t go outside save for work, exercise and essential needs like visiting the supermarket.

Others have been whipping up their own sourdough bread, banana bread and other forms of bread while in lockdown.

Many of the recipes use slow cookers, meaning home cooks can cook away all day while they work and answer emails, without having to slave over a hot stove.

How to make white homemade bread 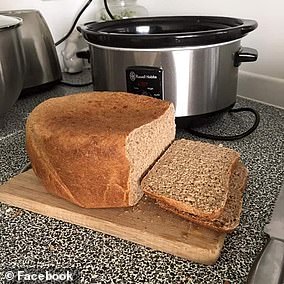 1.  Dissolve sugar and yeast in lukewarm water in a large bowl. Stir in softened margarine/butter, salt and 2 cups of the flour.

2. Stir in remaining flour half a cup at a time beating well after each addition.

3. When dough has pulled together, turn it out on a floured surface and knead until elastic for about 8 minutes. It is normal for the dough to be very sticky at first so dip hands in flour and sprinkle flour onto the dough ball as needed.

4. Lightly oil a large bowl, place the dough in bowl and turn and cover in oil. Cover with a damp cloth and allow to rise till almost doubled in size, about 45 minutes.

5. Deflate the dough and turn it out into a light floured surface. Separate the loaves into 3 equal loaf logs.

6. Place the loaves into lightly oiled pans (it should fill the pan about 2/3 of the way up). Cover the pans with a damp cloth until it expand so the pan is full and generously rounded out of the top of pan, about 30 minutes.

7. Preheat the oven to 190C and bake for 30 minute or until loaf is dark golden on top. The loaf should sound hollow when you tap the bottom of it.