The gas industry is calling on government for greater financial support and faster environment approvals to spur investment and fire up Australia's economic recovery from the coronavirus pandemic. 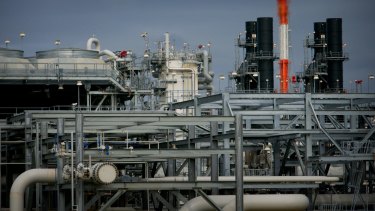 The gas industry is calling on the federal government for more support to help it fire the economy in the wake of COVID-19.Credit:Bloomberg

The federal government committed $28 million to planning work on potential onshore gas projects in the Beetaloo Basin in the Northern Territory as well as the North Bowen and Galilee basins in Queensland. It also promised $11 million for new pipeline plans and $13 million for CSIRO research.

“Relatively simple changes to the timing of some investment allowances and improved regulatory
arrangements – along with maintaining stability in the tax regimes – would make Australia much
more competitive for global investment."

"The slump in oil and LNG (liquefied natural gas) prices, which has been exacerbated by the COVID-19 pandemic, has caused producers worldwide to cut expectations for revenues and global gas consumption over the next several years," the report said.

"An immediate impact of the deteriorating business environment has been some significant writedowns on gas assets, especially LNG facilities, and downgrading of producers’ capital spending
programs."

The report backed the Morrison government’s plan to streamline environmental approvals, which were too complex and served as a "significant (and worsening) cost and time impediment for gas projects".

It also said Australia should follow the lead of countries such as Canada that allow investors to depreciate the value of their assets for tax purposes several years after they were installed, rather than wait until they were completed.

"Simply, foreign investors face many choices on investment destinations and opportunities will not come to Australia if returns are pushed down by a relatively high tax burden," the report said.

Ernst and Young identified a "high growth scenario" in which the federal government implemented the recommended changes, which it said would open new gas basins and generate $350 billion more in economic output and boost employment by 220,000 jobs over the next 20 years.

The association's call on government followed the release of a Grattan Institute report that found Australia had used up its deposits of cheaply accessible gas and argued the fuel would not be economically viable and increasingly hard to justify because of its contribution to global warming.

“Rather than indulging in wishful thinking or living in denial, the federal government and the gas industry – and its customers – should start planning now for a future without natural gas, or at least a dramatically reduced role for natural gas,” Grattan Institute energy program director Tony Wood said.