TYSON FURY grinned as he met up with old pal Dereck Chisora in London.

Chisora, 36, who twice lost to 31-year-old Fury, posted a video online alongside the WBC heavyweight champion. 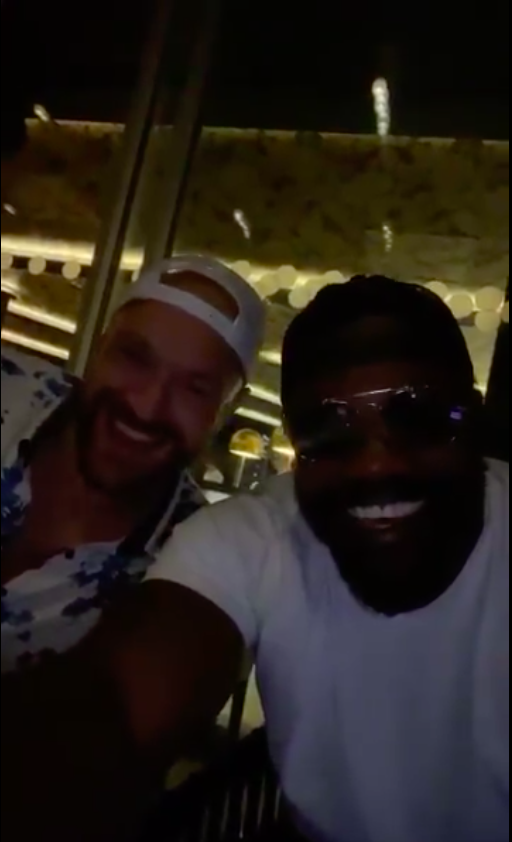 The video comes following the news Fury will have to fight Dillian Whyte, 32, if he beats Deontay Wilder, 34.

Whyte also has two wins over Chisora on his run to becoming the WBC's mandatory challenger.

Should he defeat Alexander Povetkin, 40, on August 22 it sets him up for a world title shot.

Fury is contracted to a third fight with Wilder, which was targeted for December but could now be moved to early 2021.

It further delays an undisputed title decider against Anthony Joshua, 30, who faces Kubrat Pulev, 39, in his next defence.

But Usyk is still due to face Chisora after the coronavirus pandemic KO'd their May headliner.

Chisora hopes an upset win over the former cruiserweight king would land him a showdown with Finchley Amateur Boxing friend AJ.

He told SunSport: “Hopefully the AJ fight happens if we both win.

“I don’t know how I will approach it, we go back a long way and I have never called him out or tried to make a fight with trash talk or anything like that.

“If the fight is made I think I would just call him and say, man-to-man, ‘Get ready for war’.”