The Giants downed the West Coast Fever in the preliminary final on Saturday to tee up the first ever all-NSW Super Netball grand final against the Swifts on August 28.

But after the competition was moved to Queensland earlier this year due to COVID-19, the season climax will be played out at Nissan Arena in Brisbane.

Sydney was scheduled to host six more games at Ken Rosewall Arena at Olympic Park in the lead-up to the decider before the delta outbreak in June prompted a lockdown.

An all-NSW grand final at the 10,500 capacity Homebush venue would have almost certainly been a sell-out, with the Swifts’ first home game alone of 2021 pulling in 6000 fans.

Drinkwater said the cost of those lost home games amounted to upwards of $800,000 in net revenue alone, but the additional loss of merchandise and catering revenue would take that figure closer to $1 million. 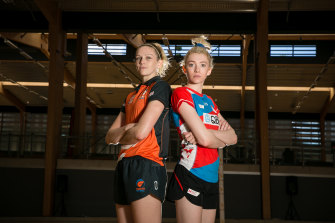 For the first time in Super Netball history, both Sydney times – Swifts and the Giants – are in the grand final. Credit:Narelle Spangher

“That’s just the cost of not having our fans there,” she said. “I can’t understate how significant the cost is for our teams.”

On top of that financial blow, the eight Super Netball teams and Netball Australia made the call to split any relocation costs for 2021 nine ways.

Most clubs budgeted for a game here or there to be moved. Instead, the Giants and Swifts were forced to move states four times within a month to keep the competition alive.

The total COVID-19 bill, Drinkwater said, is already up to around $3 million – which means Netball NSW’s split has reached over $650,000.

“It certainly far outweighs what we had initially budgeted for,” she said. “All the teams are actually working really closely together to make sure that we’re supporting each other to get through this at the moment, but I can’t stress how significant this season has been.”

Given Sydney’s elite netball teams are heavily funded by the grassroots, the lack of netball being played in the community is also having a major impact.

Netball NSW is releasing a “call to action” this week through its media partners and social media to encourage the netball community to watch the grand final, by picking a team, player or decorating their homes.

One of the game’s biggest challenges has always been converting the high participation rates across the nation into fans of the elite game. The pandemic has certainly not assisted the effort.

“We want to create that connection, so for us this week, we will absolutely be going directly to our associations and to our clubs to amplify that message and get them all connected,” she said.

“We’re going to do as much as we possibly can just acknowledge that it’s two NSW teams.”