A gay couple who were raised to believe that homosexuality was a sin have revealed how they found love after meeting on a dating app, as they celebrate their birth of their triplets.

Jake Taylor-Baumann, 30, and Sean Taylor-Baumann, 27, from Salt Lake City, Utah, were both raised in strict Mormon households and admitted they tried to ‘pray the gay away’ after realizing they were attracted to men.

The pair initially met on gay dating app Grindr in 2012 and formed a friendship in the hope of helping each other to ‘work through the gay thing’ and find ‘understanding wives’ so that they could remain part of the church.

However it soon became clear to Jake and Sean that they were falling in love. Nine years on and the couple, who have since left the church, are the proud fathers of triplets they welcomed with the help of a surrogate. 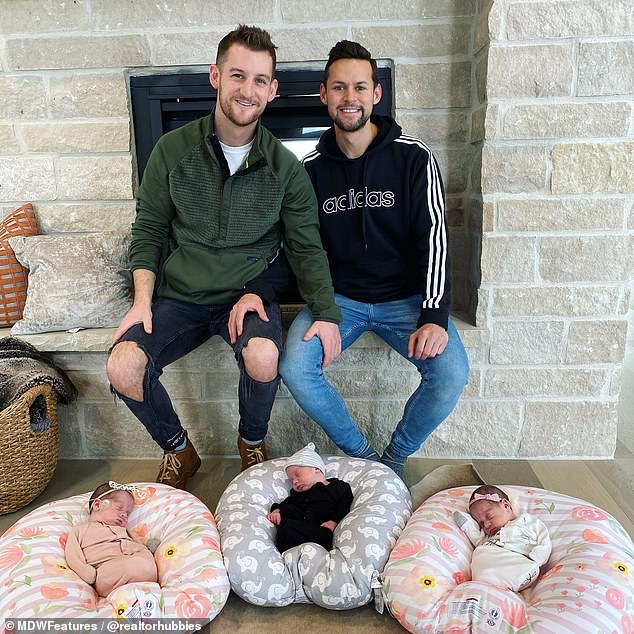 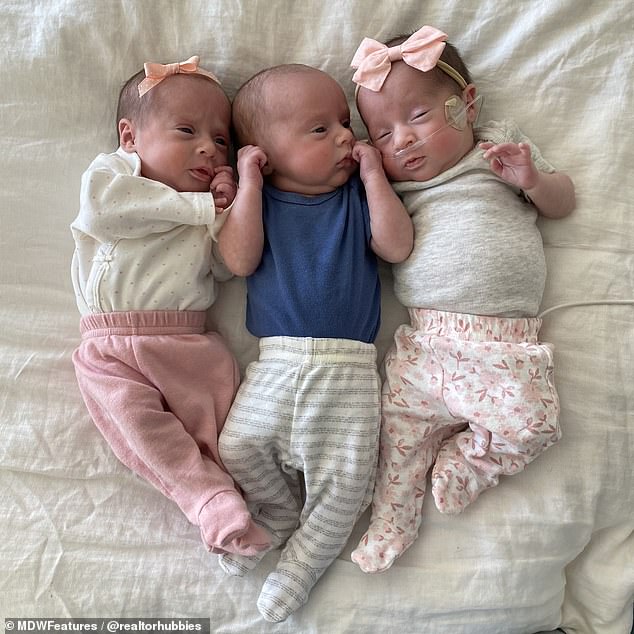 Jake and Sean spent over $100,000 to make their dream of having a family a reality before welcoming daughters Wren Malia, Winston Samuel and Willow Elizabeth

Jake said: ‘I knew that I was gay from a very young age and was so terrified of that temptation and “acting on those feelings”. When Sean and I met on Grindr, we had never come out to anyone in real life.

‘We were on the app with secret aliases and met up with the intention to help each other through the gay thing. We thought if we found understanding wives, we would be able to make life within the church work.

‘Quickly, we realized that our friendship was more than that and we fell in love pretty fast becoming each other’s very first boyfriends.’

Coming out to their families was a challenge but fortunately both sides have accepted the couple’s love for one another after seeing how happy they made each other.

‘Initially it was tough for our families when we came out to them,’ Jake said. ‘Luckily, they are incredible people and could see how truly happy we were finding each other.

‘It didn’t take long for them to embrace what they didn’t understand and accept our authentic selves.’ 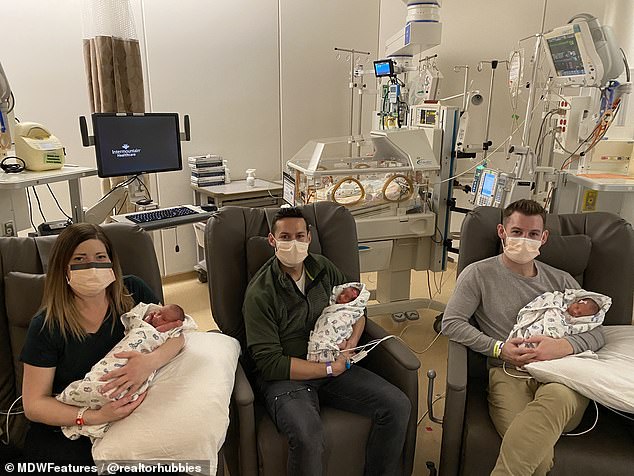 What is the Mormon church’s stance on homosexuality?

According to the Church of Jesus Christ of Latter-day Saints, homosexuality is not strictly banned, however religious leaders are clear that anyone within the church who experiences ‘same-gender attraction’ must not act on these feelings.

Mormon policy dictates that any members of the church who feels a ‘same-sex attraction’ should ‘not engage in any homosexual behavior’ and instead ‘live the law of chastity’.

Members of the church whose children ‘experience same-sex attraction or identify as gay’ are encouraged to ‘love and embrace them’ but make clear that they should not act upon these urges.

‘While same-sex attraction is not a sin, it can be a challenge,’ church policy states.

‘While one may not have chosen to have these feelings, he or she can commit to keep God’s commandments. The parent of a child who experiences same-sex attraction or identifies as gay should choose to love and embrace that child.

‘As a community of Church members, Latter-day Saints should create a welcoming community.’

Mormons who experience same-sex attraction or identify as gay are still welcome as fully-participating members of the church, provided they do not engage in any ‘homosexual behavior’.

The couple married in September 2016 and starting a family was a dream they shared.

The couple first looked into adoption but eventually decided on surrogacy. They found an anonymous egg donor but unfortunately they lost their first baby at 12 weeks. After several tests, they decided to switch surrogates.

Jake continued: ‘That was a heart-breaking moment because we always envisioned getting toward our family with that sweet woman.’

The couple were introduced to Heather, 32, who became their surrogate. She was implanted with two embryos in the hope one would be successful.

‘They both stuck but the female embryo split so to our utter shock and delight, we ended up having triplets,’ Jake continued.

Triplets Wren, Willow and Winston were delivered on 23 January. 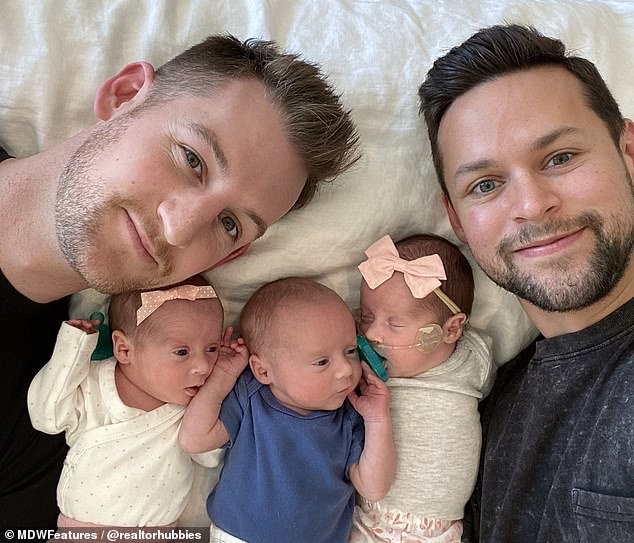 Jake, who knew he was gay from a very young age, admits he was ‘terrified’ of acting on his feelings and had never ‘come out to anyone in real life’ when he met Sean on Grindr 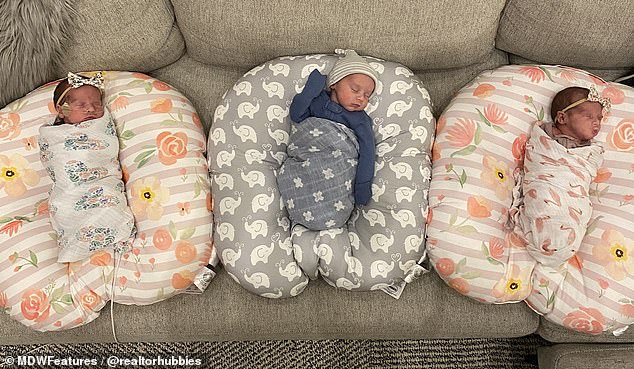 Jake said it didn’t take long for their Mormon families to embrace and accept their sexuality, but it was initially ‘tough’ when they came out

Jake continued: ‘They came early at 32 weeks and so spent their first twenty three days of life in the hospital. It was honestly so surreal seeing our babies for the first time.

‘It was such a high risk pregnancy that we had so much anxiety and worry. When we saw their little faces we were overwhelmed with emotion and tears of joy.’

The whole process wasn’t not a cheap, with the couple paying over $100,000 in medical costs, legal, and surrogacy fees to make their dream of having a family come true.

The couple have taken time out of running their successful business in order to dedicate their attention to their three children, but admit that despite both being at home, they are still suffering from sleep deprivation.

Fortunately, they have been getting tips from their surrogate Heather, who is herself a mother of triplets.

Jake continued: ‘She has been so helpful with tips and tricks on how to handle three babies. 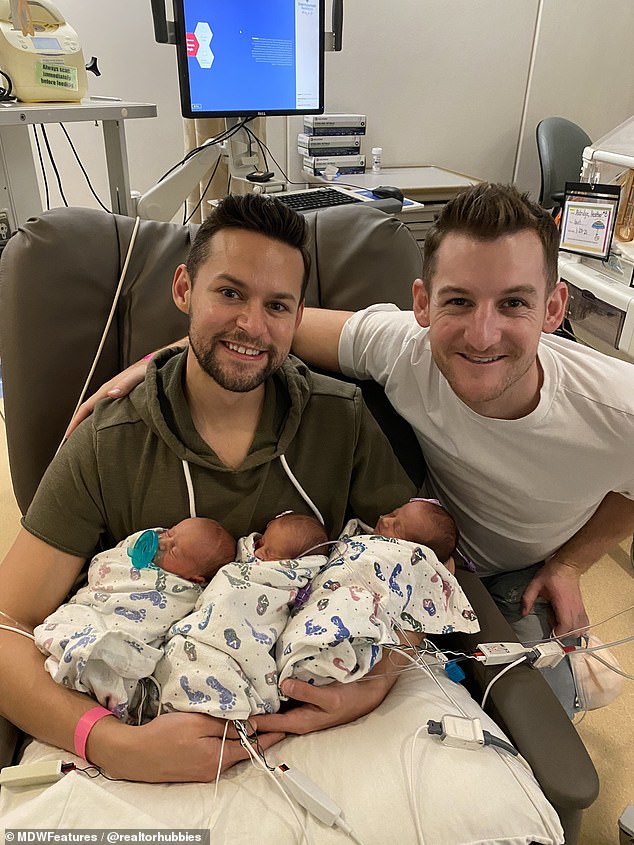 Jake revealed Heather has been helpful with tips and tricks for handling three babies, because she already has her own triplets. Pictured: Jack and Sean with their children 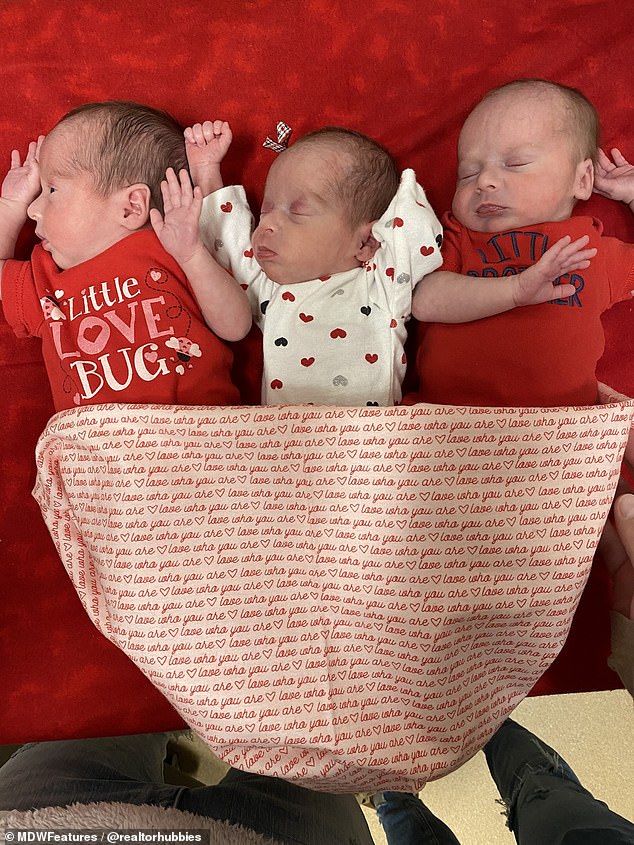 Jake said nothing that prepares you for being a parent, admitting the experience is harder than they imagined but they wouldn’t change anything. Pictured: Jake and Sean’s triplets

‘We ended up learning so much during that time and quickly learnt how to change nappies and feed them from the various nurses. We quickly became obsessed with our three biggest blessings.’

Since bringing the triplets back from hospital, Jake and Sean admit that nothing could have prepared them for the sleep exhaustion.

‘Night one was pretty tough, but luckily they are so damn cute,’ said Jake.

‘By the time we finished feeding, changing, and burping, there was only about an hour to nap before starting all over again.

‘There’s really nothing that prepares you for this experience. We told ourselves we knew this would be hard, but it’s definitely harder than we even imagined.

‘The biggest advice we have received and can give regarding multiples is to stick to a schedule. When one wakes up to eat we wake them all up.

‘It’s the only way we can have at least a semblance of normality in our schedule.

‘All that being said, it has been so worth it. All the years planning, money spent, the terrible miscarriage we went through, and now the sleepless nights.

‘We’ve definitely been learning patience because everything takes triple the time and it’s ok to slow down the pace a bit.

‘We’ve learned to enjoy the little moments and to be more present. Our hearts are bursting with love for each one of them. We wouldn’t change a thing.’