Gamers are targeted with adverts in Candy Crush Saga, DiRT Rally and Farm Heroes Saga reminding them to stay indoors during the coronavirus outbreak

Players of games like Candy Crush Saga, DiRT Rally and Farm Heroes Saga are being shown coronavirus messages urging them to ‘stay indoors’ to save lives.

The adverts are being shown on boards in 3D games or in place of traditional adverts on 2D mobile games such as Candy Crush.

The ‘Stay Home, Save Lives’ message is designed to remind players of the importance of staying in to halt the spread of COVID-19.

It is part of a joint effort by the Government and some of the UK’s leading games companies and could be spread to more games on other platforms in future. 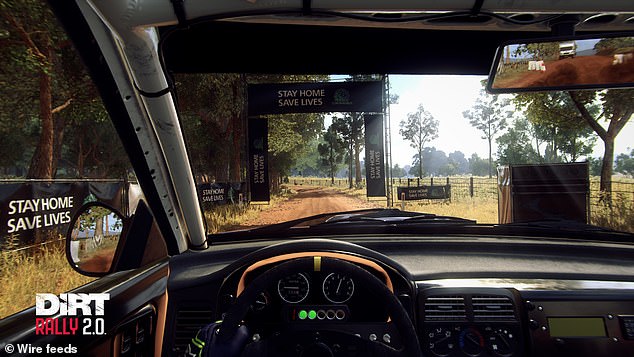 How coronavirus ‘ stay home’ message will appear in Codemasters DiRT Rally 2.0. It will also appear in other games by Activision Blizzard

The Government sees it as a ‘creative, targeted, and immediate’ tool to try and reinforce its stay at home message to a generation of young people.

Michael Gove said there is ‘evidence to suggest’ compliance with the new social distancing rules varies across different demographics of the population. 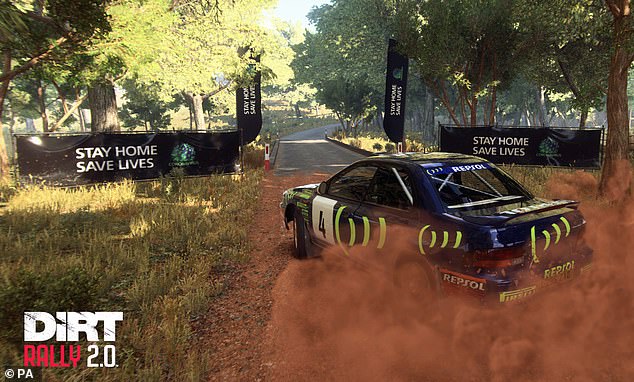 The ‘Stay Home, Save Lives’ message is designed to remind players of the importance of staying in to halt the spread of COVID-19

‘That is why it is important that we reach them appropriately – it may be that some of the messages and some of the channels we have used have not reached some segments of the population.’

This has led to the joint gaming company and government initiative to use advertising boards in games to share the stay home message.

This is because younger people are likely to spend more time playing video games than the rest of the population.

Approximately 37 million people in the UK play games, and there are around 2,277 active video game companies in the UK, according to the Culture Department.

Activision Blizzard, the leading interactive entertainment company, is inserting the ‘Stay At Home’ message in its network of mobile games.

This will include the popular casual game Candy Crush Saga.

The firm has also donated more than 230 ‘digital poster’ advertising spaces in London, where it would normally promote its own products.

These can now be used by the government for the public health messages.

Humam Sakhnini, president of King Digital Entertainment, said that allowing the messages to appear on Activision Blizzard is ‘a small part’ in helping to deliver ‘vital’ information to a wide group of people.

‘Through our millions of players we’re able to assist Public Health England and the NHS spread their life saving message: stay at home, protect our NHS, and save lives.’

Stay At Home posters are already featuring in Codemasters’ DiRT Rally 2.0, which has been played by millions of people since its February 2019 launch.

Toby Evan-Jones, the vice president of business development at Codemasters, said their games are designed to allow them to remotely update in-game banners.

‘We came to realise that technology within our games, which enables the remote updating of banners within the virtual environment, could be repurposed to assist with the coronavirus communication effort,’ he said.

‘It’s fantastic to see conversations already being sparked amongst our community.’

The Stay At Home message and links to relevant official Government pages will also appear when players load up games produced by the firm Rebellion. 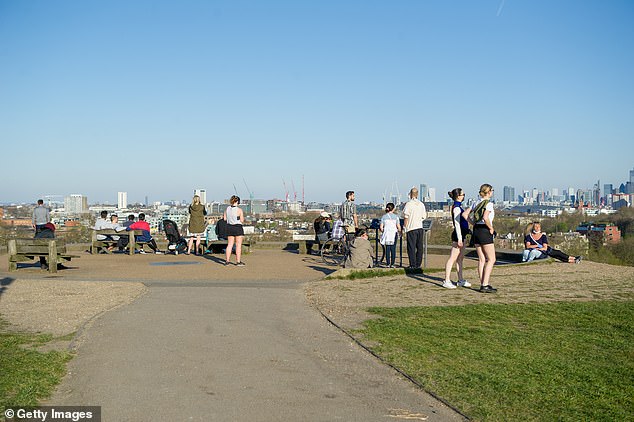 Members of the public enjoy the day’s warm weather on Primrose Hill on April 5, 2020 in London, England. The government hope to use in-game messages to reach more people with the Stay Home instruction after evidence suggested young people were more likely to go out

Rebellion multimedia studios has also offered to advertise these messages in the comic books that it publishes.

The company’s co-founder Jason Kingsley said: ‘We know how fundamentally beneficial video games, like Sniper Elite and Strange Brigade, and comics, like 2000 AD, have been and will continue to be for many of us during this extraordinary time.

‘It makes total sense for us to help promote important public health messaging while keeping those fans entertained in the safety of their homes,’ he said.

The Government has asked any company able to spread the message through their platform to get in touch, especially if they want to use in-game messaging.

Culture Secretary Oliver Dowden added: ‘It is absolutely vital that we all follow the simple Government advice to stay at home, protect the NHS and save lives.

‘I’m delighted to see the UK’s brilliant video games industry stepping up to strongly reinforce this message to gamers across the UK.’