From the Archives, 1978: 20 held hostage in Melbourne restaurant siege

A man armed with two shotguns was holding 20 people hostage in a city restaurant early today. 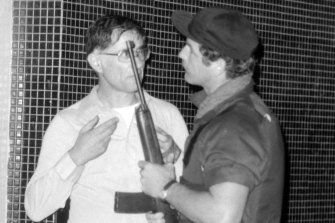 A policeman, gun in hand, talks to one of the Italian Waiter’s Club owners.Credit:The Age Archvies

The man burst into the Italian Waiters’ Club in Meyers Place, off Bourke Street, about 1:15 am with the guns held at a taxi driver.

Seconds earlier he fired three shots in the air after forcing the driver to stop outside the building.

Early today ambulances, the dog squad and about 100 police were standing by. The block was cordoned off.

At 2:50 am the gunman released the cab driver.

The driver told police the gunman had no intention of coming out or releasing the hostages.

A waiter at the club said the man was about 17 years of age.

He had been in the dining area earlier in the evening, he said.

“There were about 20 people inside dining at the time… when suddenly we heard three shotgun blasts,” the waiter said.

“Then he barged in with the taxi driver and ordered me to get out of the way.”

The waiter said he managed to slip outside with another waiter when the gunmen ordered the customers and staff into a corner of the restaurant.

The drama is believed to have started outside a spaghetti bar in St Kilda where the Yellow Cab driver, aged about 55, picked up the gunman.

A waiter told me there was no way into the building except by one flight of stairs.

“The police can’t get inside – even through the roof.”

It is understood the gunman may be seeking the release of a Pentridge prisoner.