The freezer holding a Northern California county’s entire allotment of the Moderna COVID-19 vaccine suffered a power outage Monday, forcing officials to distribute all 830 doses on an emergency basis before the vaccine thawed. That would have made it ineffective.

The Mendocino Voice was first to report on the development. 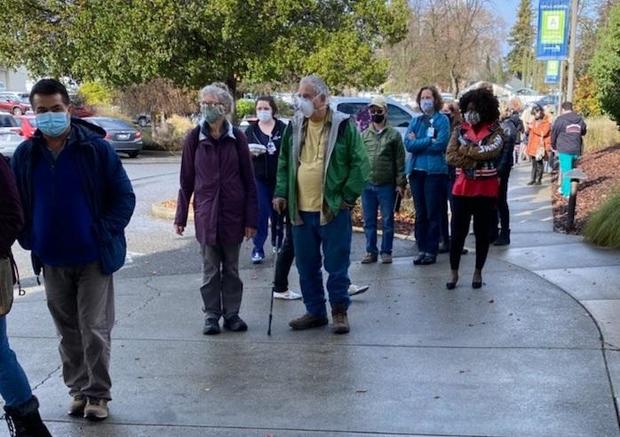 Judson Howe, president of Adventist Health in Mendocino County, confirmed to CBS News that the power failure was discovered at about 11:35 a.m. in the Adventist Health Ukiah Valley Medical Center in the city of Ukiah. An alarm designed to alert staff to any outages didn’t work, so the vaccine either had started to thaw or could have thawed.

The hospital got the word out about the sudden pending distribution and called in staffers to give shots at the hospital and some clinics.

A line quickly formed at the hospital, consisting of patients and people who’d heard about the opportunity by word of mouth.

The shots were administered there within two hours and some people couldn’t get one, Howe said.

Some doses were sent to a local nursing home and the county to be administered, he added.

The Moderna vaccine has been shown to have an efficacy of over 94%, similar to the one made by Pfizer.

They’re the only vaccines approved by the Food and Drug Administration so far for use in the U.S., on an emergency basis.

But unlike Pfizer’s, which must be shipped and stored at ultra-cold temperatures, Moderna’s can be kept at standard freezer temperatures.

Related posts:
How One Change Helped This Guy Stop His Quarantine Rage
Patty Jenkins exposes ‘war’ with Warner Bros. over ‘Wonder Woman’
Popular News
The Funniest "Buss It" Challenge Videos On TikTok Will Have You Twerking & LOLing
28/01/2021
Man Utd wonderkid Ramon Calliste, called ‘the next Giggs’, now owns luxury watch business and makes £5m a year – The Sun
26/03/2020
Megan Thee Stallion Addresses Criticism Over Twerking: ‘I Love to Shake My A**’
26/03/2020
Police guard shops to stop coronavirus panic-buyers and enforce social distancing – The Sun
26/03/2020
Coronavirus: Good Morning Britain’s Dr Hilary reveals ‘game-changing’ self-testing kit
26/03/2020
Recent Posts
This website uses cookies to improve your user experience and to provide you with advertisements that are relevant to your interests. By continuing to browse the site you are agreeing to our use of cookies.Ok