It’s winter in Nevada, and 61-year-old Fern (Frances McDormand) is leaving home. Her husband is dead and the company town which has been their home for decades no longer exists.

Its postcode has been expunged and the gypsum plant which sustained it sits empty and shrouded in snow, looming at the top of the hill like some oversized haunted house. 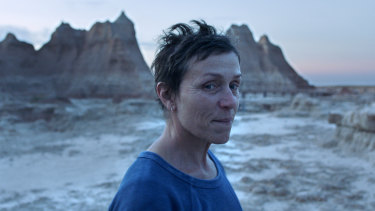 Frances McDormand in a scene from the film Nomadland.Credit:AP

Fern is going on the road. She has her van, on which she’s bestowed the optimistic name Vanguard, and she has a seasonal packing job at the nearby Amazon warehouse. It all looks and sounds pretty bleak, as if we’re about to embark on a dramatised analysis of the making of a Trump voter, but Nomadland is not about alienation.

Based on a book by Jessica Bruder, a journalist who spent three years exploring the routes and routines of America’s grey nomads, it turns out to be a politics-free zone. Fern and her fellow travellers don’t dwell on their grievances. Most have chosen a life of mobility because it suits them. To them, houseless doesn’t mean homeless.

Directed by Chloe Zhao, a Californian-based Chinese, who impressed McDormand with her last film, The Rider, a contemporary Western, the film could have been a disaster. McDormand and David Strathairn are the only two professional actors in the cast. Everybody else is a genuine nomad and the interaction between them could have resulted in a discordant hybrid of the real and the made-up, but the integration is seamless. The least actressy of actresses, McDormand merges completely with the landscape and everybody in it. The friendships that Fern makes spring from a collective store of commonsense gained from experience and coloured with playful good humour.