Caught in the act: Pair of fornicating flies that became frozen in amber 41 million years ago are among the oldest fossilised mating animals ever discovered

A pair of fornicating flies that became frozen in amber 41 million years ago are among the oldest fossilised mating animals ever to be discovered.

The frisky insects appear to have been in the very throes of passion when they got trapped in gluey tree resin and preserved — unparted, even in death.

Over time, the resin hardened into amber hardened, entombing the amorous pair with their legs still entwined.

The fact than flies typically only take a few seconds to copulate makes the fossil find from Victoria, Australia even more rare and remarkable. 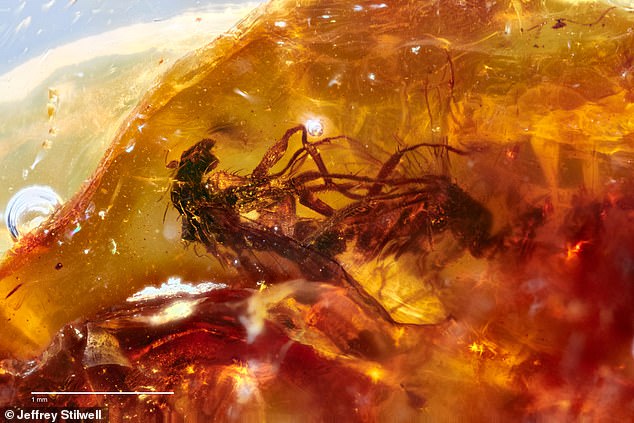 A pair of fornicating flies that became frozen in amber 41 million years ago are among the oldest fossilised mating animals ever to be discovered. The frisky insects appear to have been in the very throes of passion when they got trapped in gluey tree resin and preserved

Amber has been used in jewelry for thousands of years, and is often found to hold remarkably well-preserved materials from eras long since passed.

The golden-coloured translucent substance is formed when resin from extinct coniferous trees became hardened and then fossilised.

Often insects, plant material, pollen and other creatures became trapped in the resin, causing them to be entombed within after it solidified.

Lead author Professor Jeffrey Stilwell, of Monash University, Melbourne, said: ‘You could say these long-legged flies were ‘caught in the act’ 41 million years ago – which is astounding.’

He was certain this was the scenario when the specimen was first analysed. Co-author Dr Dan Bickel, a fly expert at the Australian Museum, then confirmed it.

Prof Stilwell said: ‘The flies could have accidentally landed on the tree resin to mate, and then got stuck forever together, literally.

‘You can imagine all of the statements by my amber student volunteers, one being ‘Doin’ it Gondwana style’, etc’

Gondwana was an ancient supercontinent that eventually split into separate land masses – including Australia.

Mating has been captured in ambers unearthed in other parts of the world but is ‘very rare’, said Prof Stilwell.

In Steven Spielberg’s classic 1993 film starring Richard Attenborough dinosaurs are reintroduced to the world by extracting their DNA from a mosquito preserved in amber.

Most biologists agree the scenario isn’t possible. But many experts believe DNA can be preserved in amber for millions of years. 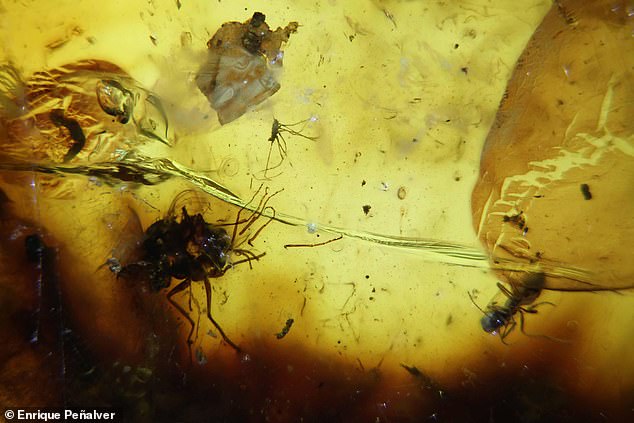 Prof Stilwell said: ‘This is one of the greatest discoveries in palaeontology for Australia.

‘Amber is considered to be the ‘Holy Grail’ in the discipline, as organisms are preserved in a state of suspended animation in perfect 3D space, looking just like they died yesterday – but in fact are many millions of years old, providing us with an enormous amount of information on ancient terrestrial ecosystems.’

His international team – including scientists from the University of Plymouth – stumbled upon the flies while trawling through almost 6,000 pieces of fossilised amber.

They were unearthed from rocks dating back 40 to 54 million years at two sites – one in Western Tasmania and the other in Victoria.

Among them was the rare ‘frozen behaviour’ of two mating individuals known as long-legged flies – scientifically named Dolichopodidae.

They are commonly found across Britain and the rest of the world today. 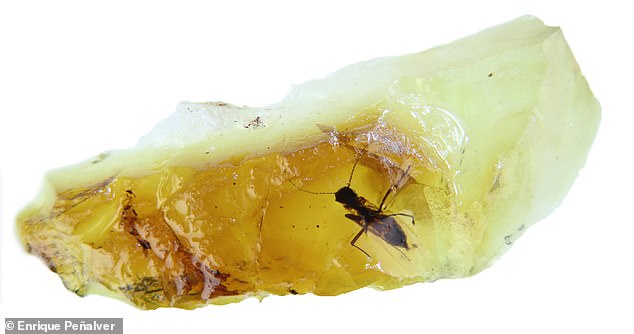 Prof Stilwell said: ‘This may be the first example of ‘frozen behaviour’ in the fossil record of Australia.

‘Frozen behaviours are rarely recorded in the fossil record, but can be quite diverse, including defence, parasitism, feeding, swarms, and so on.’

Other finds included a flake of amber containing a beautifully preserved biting midge and a larger piece with a long-legged fly and and another biting midge.

Both specimens are about 41 million years old and were found at the Anglesea, Victoria, location.

The researchers also analysed amber deposits unearthed by the team at other spots in southeastern Australia, Tasmania and New Zealand – dating back 230 million years.

This was about 50 million years before the break-up of Gondwana – which included South America, Africa, Madagascar, India, Antarctica and Australia.

The land mass broke away from the Pangea supercontinent around 200 million years ago.

There were fossilised ants, the first Australian fossils of ‘slender springtails’, a tiny, wingless arthropod and an insect called a felt scale (Eriococcidae). These were about 53 million years old.

The findings published in Scientific Reports shed light on an ancient antipodean ecology.

They are the oldest known animals and plants preserved in amber from Southern Gondwana. 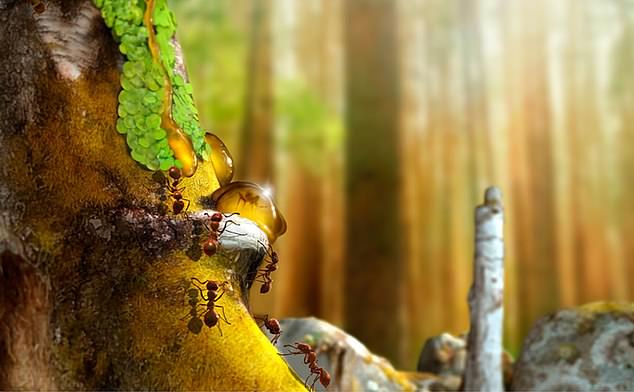 The researchers also analysed amber deposits unearthed by the team at other spots in southeastern Australia, Tasmania and New Zealand – dating back 230 million years. There were fossilised ants, the first Australian fossils of ‘slender springtails’, a tiny, wingless arthropod and an insect called a felt scale. Pictured, an artist’s impression of ants getting stuck in resin

‘Amber preserves fossils in exceptional 3D space, just as they died many millions of years ago.

‘We now have our first definite glimpses of ancient subpolar greenhouse Earth ecosystems, when Australia and Antarctica were attached and situated much further south in higher latitudes.

‘There has never been a fossil ant recorded in Australia before, but we can now state for the first time that ants have been a significant part of the Australian ecosystem for over 40 million years when Australia was still attached to Antarctica during the last gasp of the Gondwana supercontinent.’

Most amber records are from the Northern Hemisphere. The study has confirmed it was abundant in the ancient supercontinents of Southern Pangea and Southern Gondwana.

Added Prof Stilwell: ‘The research furthers our understanding of prehistoric southern ecosystems in Australia and New Zealand during the Late Triassic to mid-Paleogene periods – 230 to 40 million years ago.’

The full findings of the study were published in the journal Scientific Reports.