FREEDOM! International travel was declared illegal nine long weeks ago but today Brits were allowed to jet off once more.

Excited holidaymakers and those desperate to see friends and family again were today pouring into airports across the country for the great getaway as May 17 heralded the latest easing of lockdown. 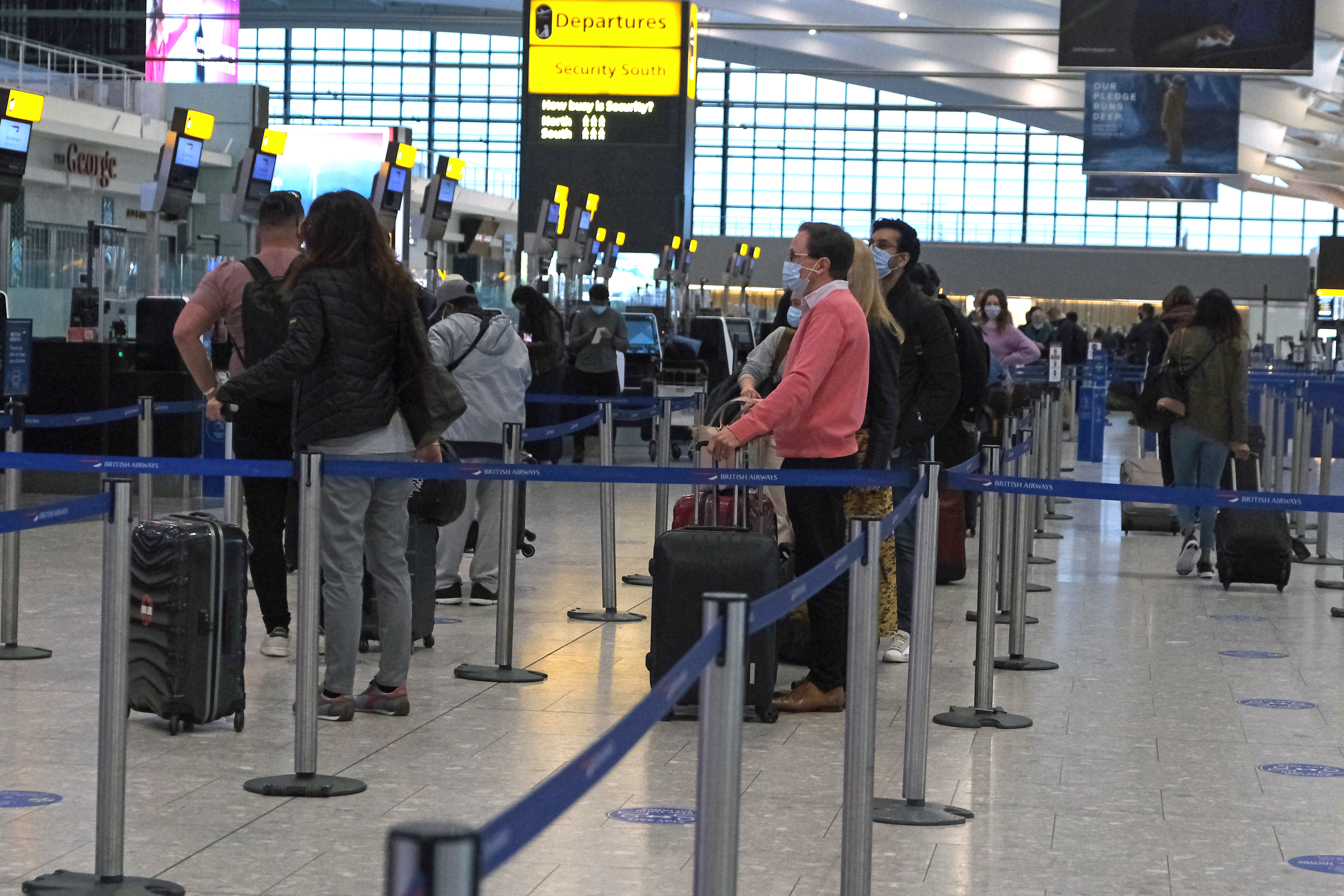 But there were limited options for sunseekers as just two sunny European destinations are on the UK's green travel list, meaning people don't have to quarantine on their return to England -Portugal and the British overseas territory of Gibraltar.

As a result, the cost of plane tickets to Portugal soared, with air fares doubling in the 48 hours after the green list announcement. 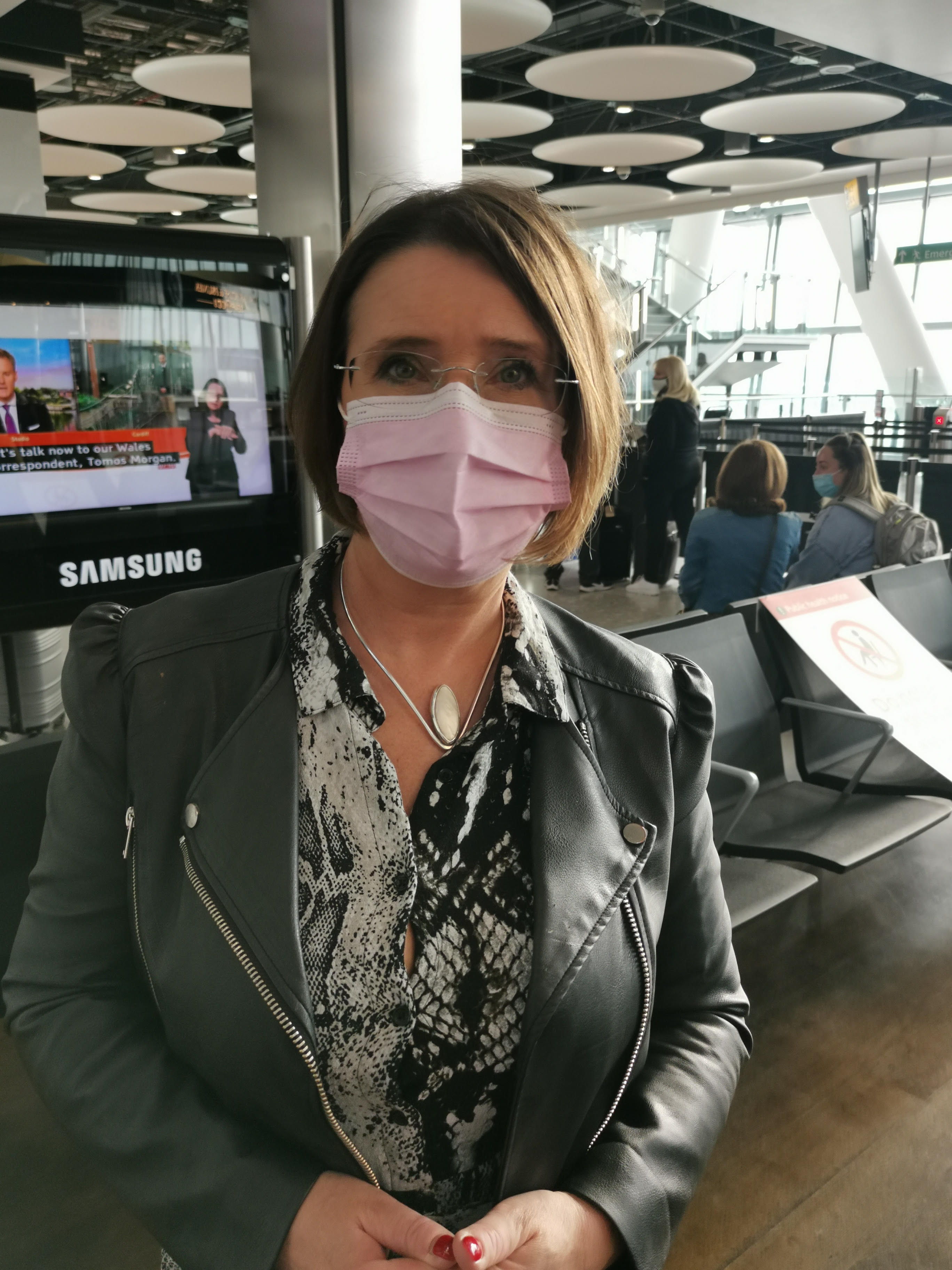 I joined passengers flying from Heathrow’s Terminal 5 on the 7.30am British Airways flight BA500 to Lisbon in Portugal, one of the very few countries on the UK government’s green list that is welcoming Brits back.

A total of 355 flights are due to take off and land at Heathrow today – up from the 224 operating at the airport last Monday when travel was still illegal.

But it’s a drop in the ocean compared to the 1,400 the airport was used to handling pre-pandemic.

Once the businest airport in the world, today just terminals two and five were open. Of course, masks are obligatory everywhere.

All of the shops in British Airways’ flagship Terminal 5 are open. You can also order food and drink to ‘grab and go’ from the restaurants and bars open via the Heathrow Airport app – and you’re encouraged to then take it away to avoid overcrowding.

A business class ticket no longer guarantees you a place at the front of the line at the boarding gate. 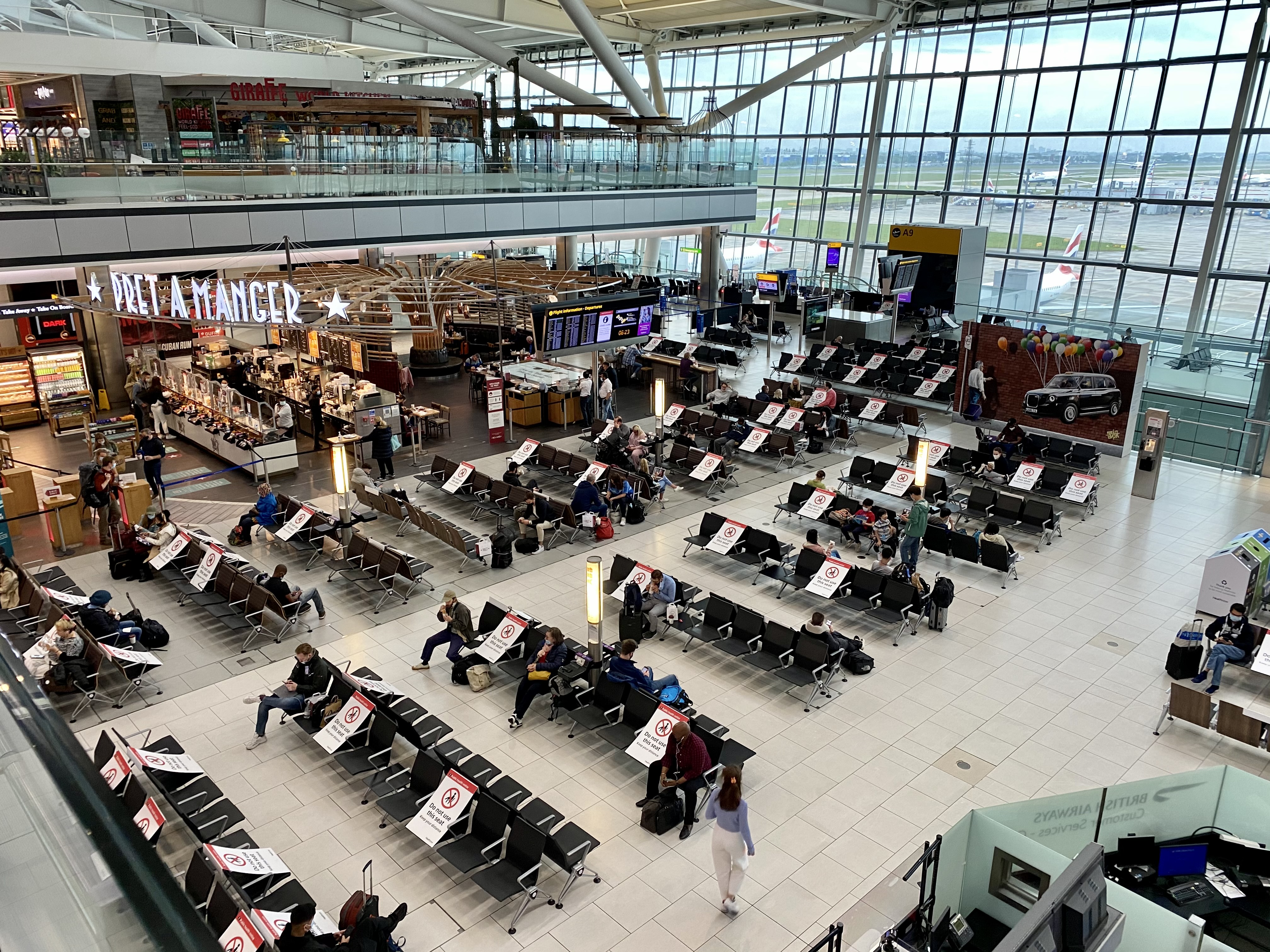 BA staff call passengers seated at the back of the plane first – filling up towards the front to avoid unnecessary contact between travellers.

And again, the new post-pandemic experience even extends to onboard catering.

BA famously ditched free food in economy on short haul flights in 2017 but when they started flying after the first lockdown, provided everyone onboard with a bottle of water and snack, such as a breakfast bar or crisps, for free.

And for anyone wanting a more substantial meal or drinks, there’s the chance to pre-order up to 12hours before the flight with sandwiches and pies created by celebrity chef Tom Kerridge.

Of course, typically for me, I forget and miss the 12hour deadline but for a two-hour flight, I stock up in Boots with a sarnie and diet coke.

We are up and away and in just two hours 20minutes are touching down in Lisbon.

But travel in this new pandemic era is unlike anything most of us have experienced.

My preparations for the trip involved far more than checking my passport was in date and buying some foreign currency. 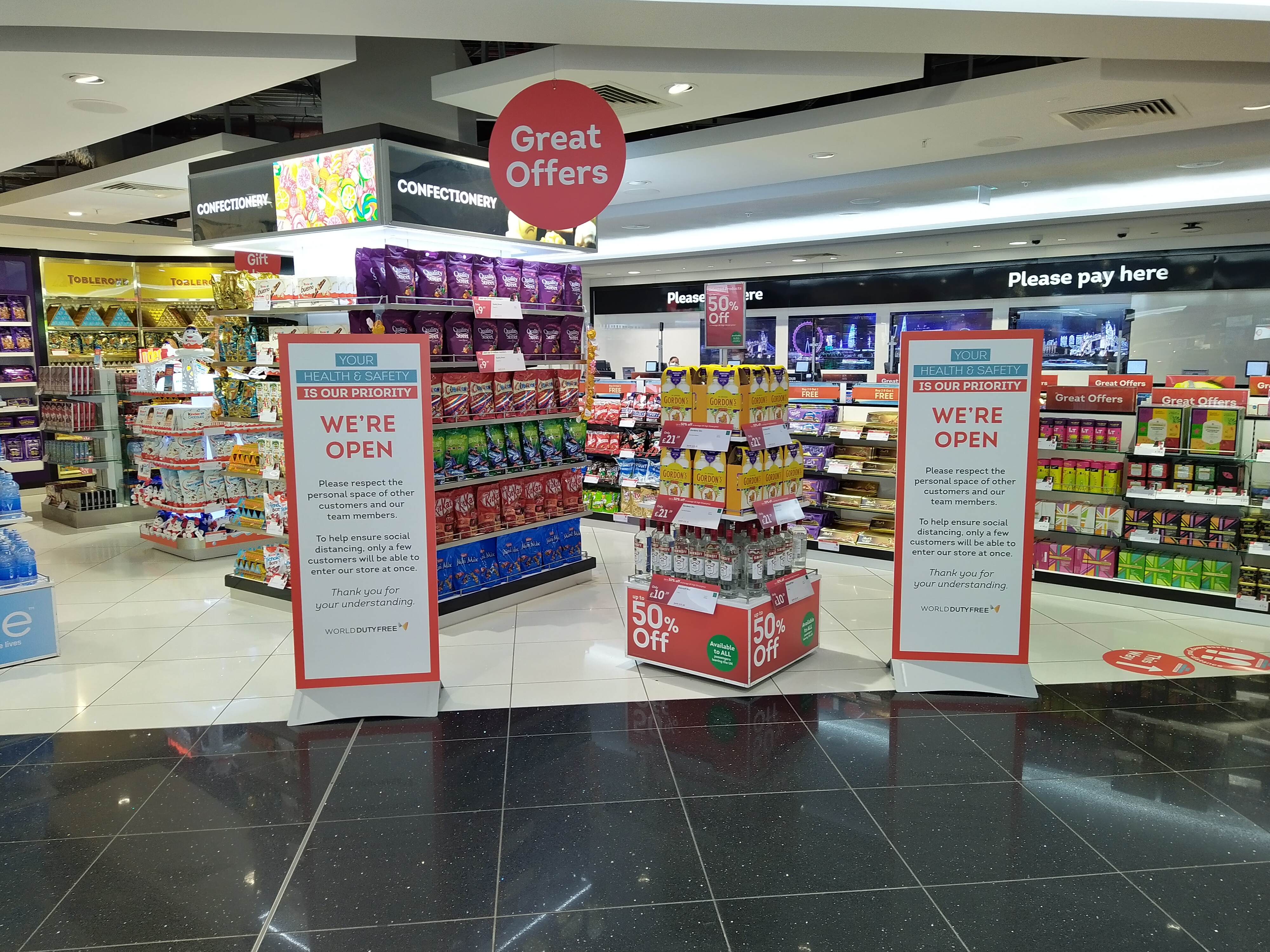 Portugal requires a negative PCR test for all arrivals and this had to be booked through a government-approved provider and the test taken up to 72hours before the flight.

With my test taken I had to fill in a Portugese locator form online detailing where I would be staying and for how long.

British Airways required me to confirm I’d filled that form in – and prove I had a negative test result – before allowing me to finally check in.

But the forms don’t end there. I’ve had to order – and pack in my luggae – a lateral flow test to be taken in Portugal for my eventual return to the UK.

Booking through test provider Qured, I’ve made an appointment for a video interview with one of their staff while I am in Portugal to confirm I’ve taken the test correctly and provide me with the certificate to show I am negative.

I’ve still got to fill in the UK government’s Passenger Locator Form, providing details of not just the test to get me back in to the UK but I have booked a PCR test to take on Day 2 after my return. Without this, Border Force staff could fine me up to £500.

I download all the certificates onto my phone and screenshot a host of QR codes and print them out just in case my phone dies or I lose it on the trip.

For an experienced travel journalist used to jetting off around the world, it’s still a challenge. For those doing this for the first time, or for multiple family members, it will be even more complicated. 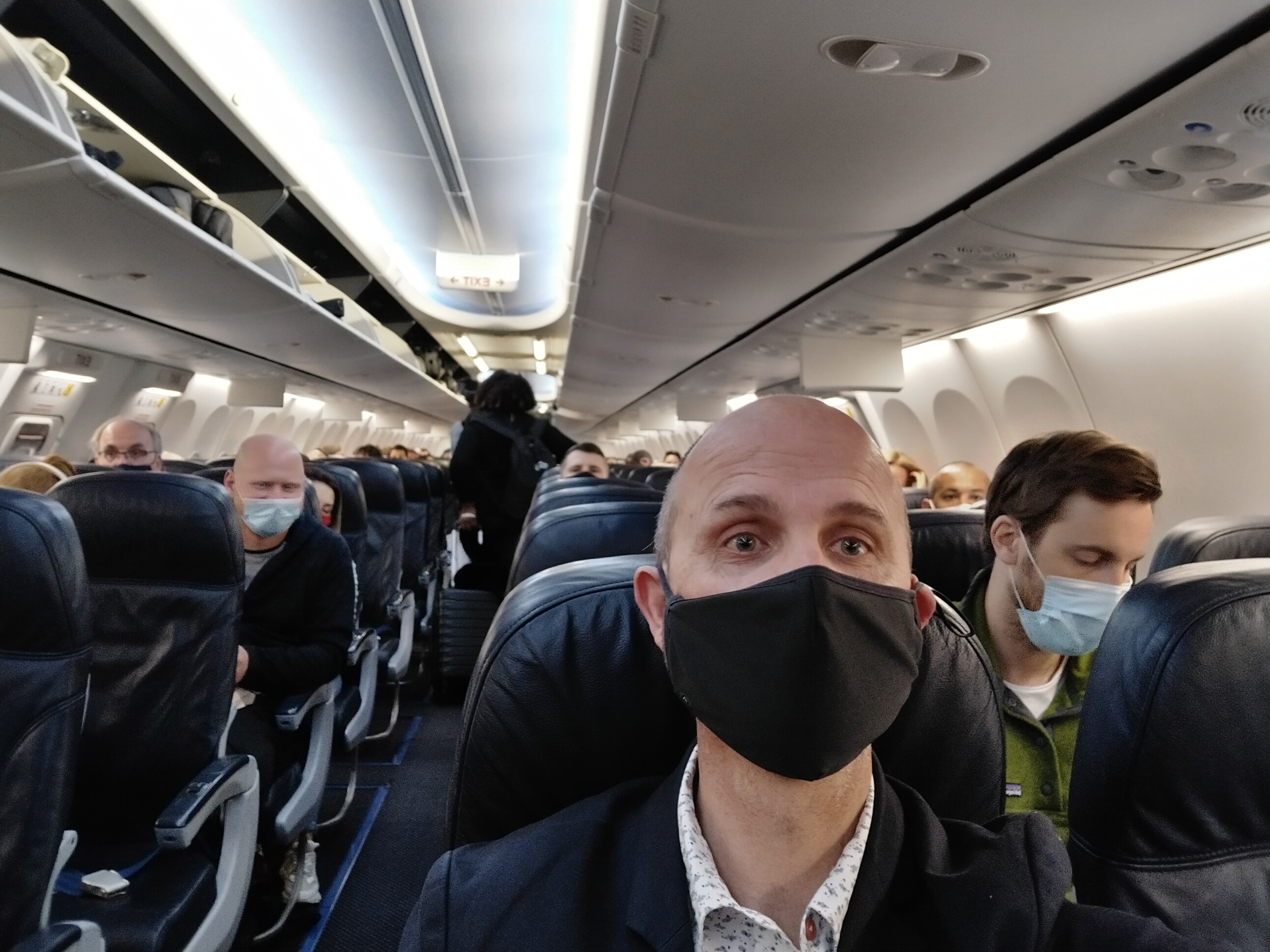 Lockdown-weary Brits are heading for Portugal in their thousands this morning as foreign holidays became legal once more.

Around 5,500 British holidaymakers are due to arrive at Faro Airport alone as 17 flights arrive there from the UK today.

Joining the growing throng of sun seekers at Gatwick Airport, I put Britain’s new holiday regime to the test on a 6.30am flight to the Portuguese island of Madeira.

I felt a shiver of excitement as I arrived at London’s second largest airport at the liberating prospect of international travel after months of grim lockdown.

The airport was still eerily quiet as I arrived to be greeted with a sign saying Keep Healthy, Keep Safe, Keep Flying. 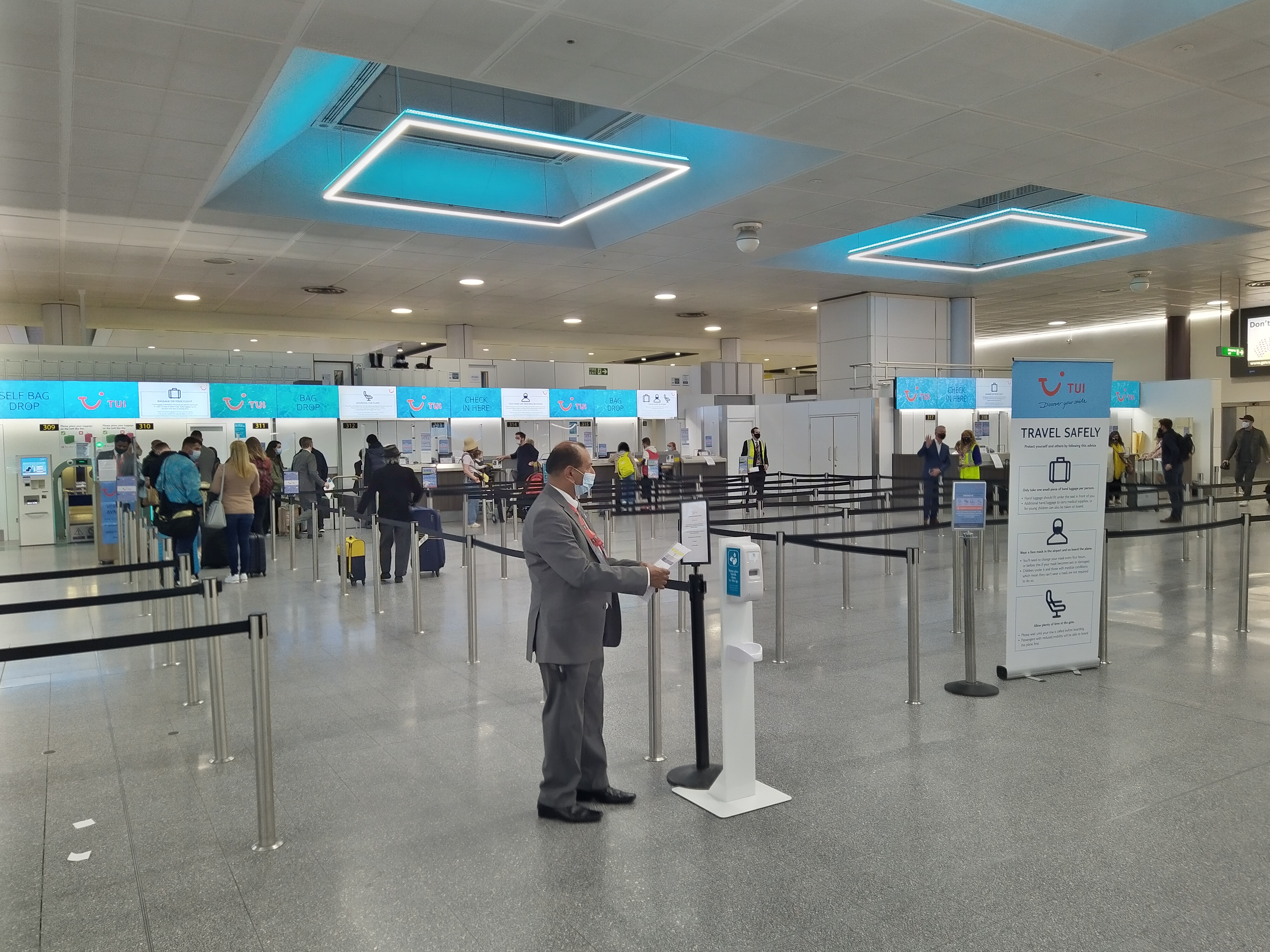 Entering the North Terminal, travellers are greeted by a hand sanitizer station and messages to adhere to social distancing, wash your hands regularly and wear a mask.

Everyone appeared to be sticking to the rules in the spotlessly-clean terminal. It felt safe and well-managed.

At the TUI check in desk it was time to see if my testing and online form filling would pass muster.

Portugal is the first major European holiday destination to get Downing Street green light status, meaning holidaymakers won’t have to quarantine for ten days after their return.

But there was some covid pre-holiday admin. Portugal – which welcomed around 2.5 million British visitors in 2019 – had only formally announced it would accept UK tourists once more on Friday.

After securing their bookings, Brits then had to make sure they had the correct testing and paperwork completed before flying.

First I had to take a PCR fit-to-fly test. TUI have a subsidised deal with a Government-approved company called Chronomics who deliver a testing kit to your door.

A driver then waits while you swab your throat and nose and takes the sealed package for lab testing.

I took the test at Friday lunchtime and got the negative result on email in the early hours of the following morning.

Then you have to fill in an online Madeira Traveler Registration form and download your negative test result onto the form.

Three days before returning to the UK you have to take a pre-departure test. Then you have take another test on arrival in the UK in the two days after landing.

TUI are offering a package for all three tests costing £60.

Oh, and don’t forget to fill out an online passenger locator form before arriving back in Britain.

At TUI check in I had to show my negative test and the QR code from my Madeira registration form. It took a couple of minutes on my phone to locate the bits and pieces.

One middle-aged British couple said: “It’s a bit fiddly. We’re good with computers but I imagine it would be daunting for some elderly people.”

Security was a breeze – it was 4.30am – with a trickle of travellers passing airside.

Duty Free was open for business with social-distancing rules applying.

Unfortunately for nervous fliers like me, Wetherspoon’s Red Lion was closed. So breakfast was in Pret a Manger.