Viewers are left in tears as widow, 68, falls for her suitor, 60, on Five Guys A Week after saying she ‘just wants somebody to love her’ following her husband’s death

Five Guys a Week viewers were left in tears last night as a widow found love, after saying she ‘just wanted somebody to love her’ following the death of her husband.

Susan, 68, from Yorkshire, lost her husband of 25 years in 2012 and said she felt it was now ‘time to accept someone else’s kindness’.

She invited five guys to come and stay in the home on the Channel 4 show in order to pursue a new relationship, and ended up falling for Adrian, 60.

Viewers were left in tears over the programme, with one commenting: ‘I can’t cope with this episode, so emotional.’ 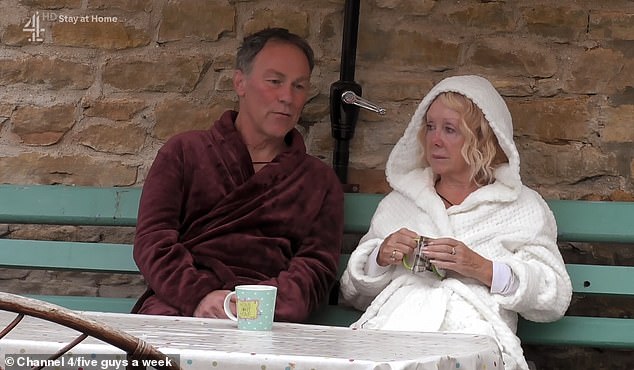 Viewers were left in tears over the surprisingly emotional episode of Five Guys A Week last night as Susan, 68, from Yorkshire, sought to find love after the death of her husband (pictured, with her suitor Adrian, 60)

‘Susan is so lovely and the men are so sweet too.’

One was impressed by the sincerity of the couple’s connection, tweeting: ‘I love it when older people find love.

‘I feel like most of the time it’s more sincere because they’ve been through more. They aren’t as fake as my generation.’

As Susan started the journey and welcomed five men to her home in Yorkshire, she revealed: ‘I’m opening my home, my heart and exposing myself a bit.’ 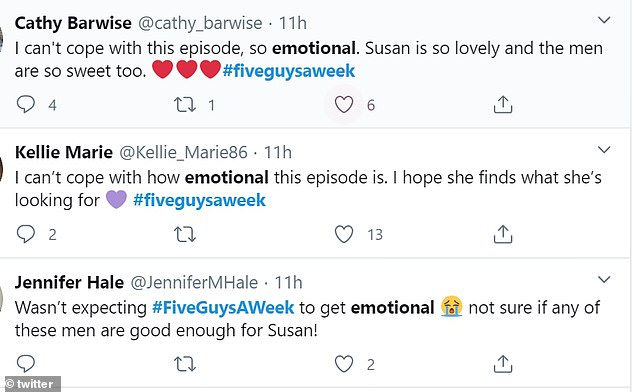 Social media users were left in tears as they watched Susan connect with her five suitors, with one admitting they ‘couldn’t cope’ with the emotional episode

I was married for 25 years, and I was happily married and unfortunately he passed away eight years ago.

She went on to say that she had ‘everything she needed in life apart from love.’

She welcomed the five men to her home as she prepared to date them, and ended up getting emotional as she opened up about her husband’s death to potential love interests Theo, Cez, Tasos, Gavin and Adrian. 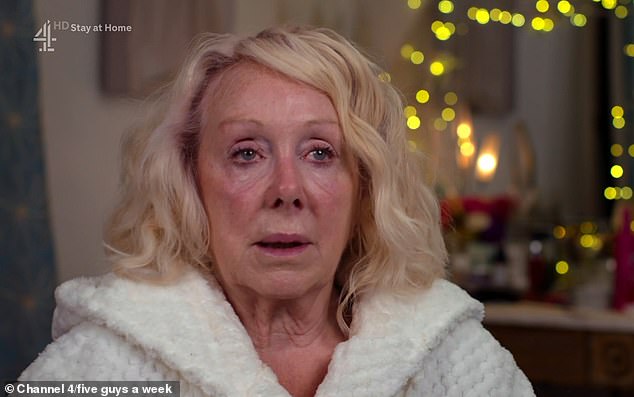 Susan welcomed the eclectic mix of guys, who were aged between 60 and 67, to move into her beautiful Georgian cottage.

As she opened up more, she invited several of the men to join her at a Peaky Blinders themed date night, when former business owner Adrian asked her to slow dance.

Speaking of their connection, the charming Adrian said: ‘She just had a lovely twinkle in her eye, it’s just the little things like that which make you feel like the things you feel someone feels the same way.

‘It’s a long time since I felt that way.’ 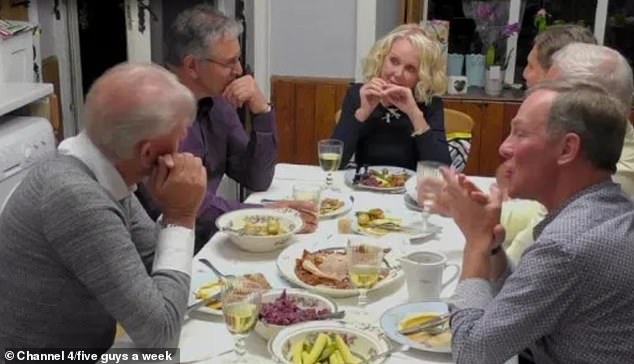 As the pair danced together to Etta James’ At Last, Susan couldn’t help but admit she felt emotional, saying: ‘I’m trying not to cry.’

But the suitor said he completely understood, and told her: ‘Just rest against my shoulder and have a cry if you want.’

After bonding with the men, she ended up weeping the following morning, telling Adrian: ‘I’m a bit overwhelmed by it really.’

She said: ‘I don’t know what the future is, but I know I’m ready for someone else’s kindness. I’m ready to let go, and ready to fly now.’ 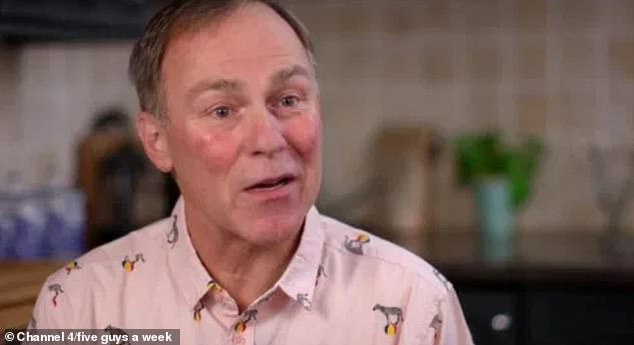 Susan ended up connecting with Adrian, 60, after the two shared an emotional moment while slow-dancing at a Peaky Blinders themed evening 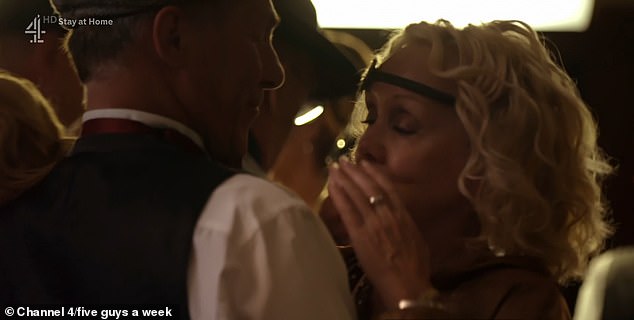 She ended up choosing Adrian out of her five suitors, as she felt the most connection with him throughout his stay in her home.

He said he was determined to find a partner he could have ‘at least 25 years together.’

Many were delighted that Susan had managed to find a suitor she had connected with, with one commenting: ‘I can’t cope with how emotional this episode is. I hope she finds what she’s looking for.’

Another wrote: ‘Wasn’t expecting to get emotional. Not sure if any of these men are good enough for Susan!’