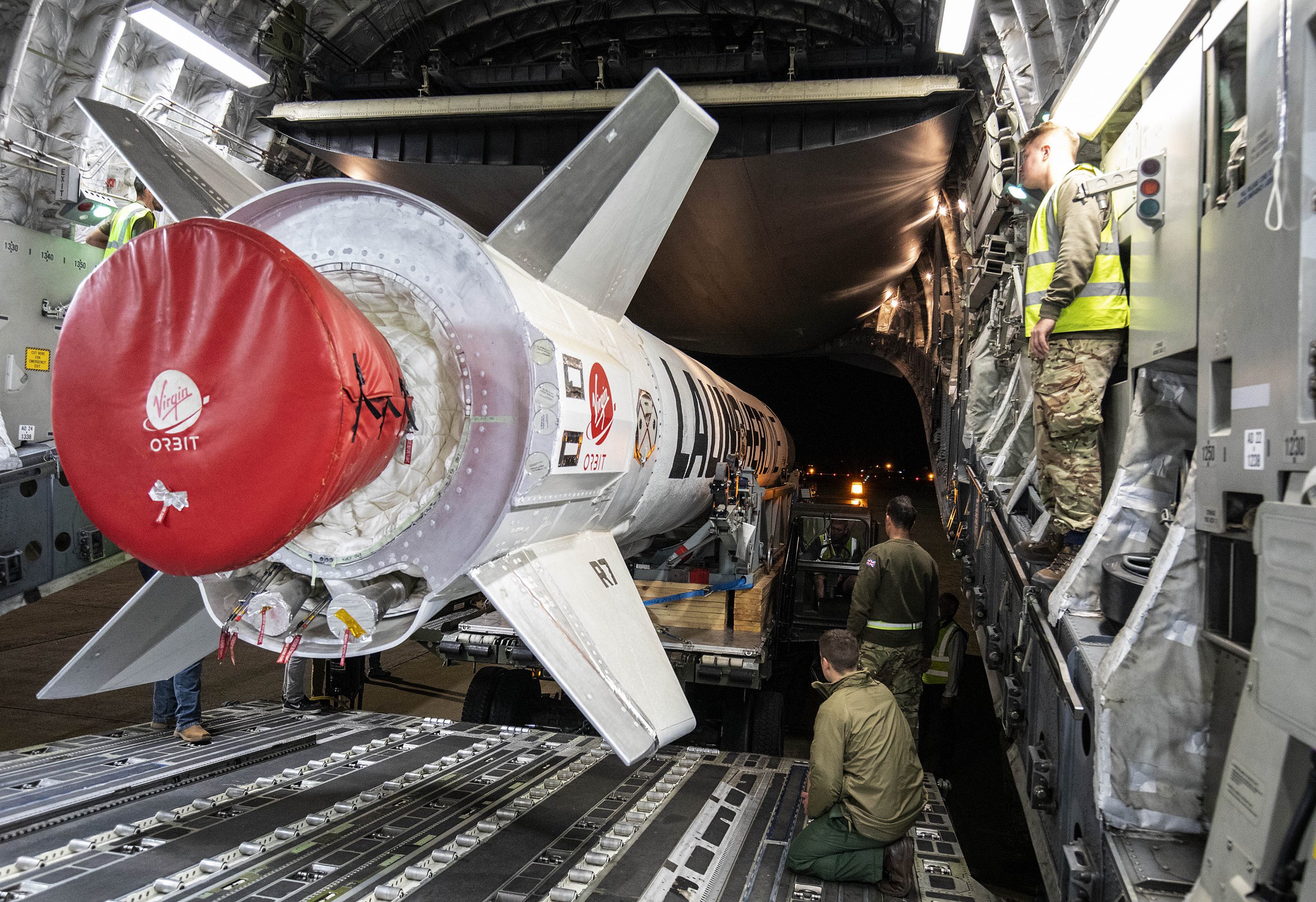 A rocket that will become the first ever to launch from UK soil has arrived in Cornwall after travelling from California.

A 99 Squadron C-17 military transport carried the rocket to the UK after being built by Richard Branson’s company in the United States.

In November, two ‘cubesat’ satellites (each around the size of a shoebox) will be delivered into space from the spaceport in Newquay.

The LauncherOne rocket will launch horizontally from underneath a modified Boeing 747 that will take off from the UK.

Virgin Orbit will launch this rocket into space as part of the first ever space launch from UK soil.

Squadron Leader Mathew ‘Stanny’ Stannard, an RAF test pilot currently working within Virgin Orbit, will be part of the crew launching the rocket from the Boeing 747.

This will be the sixth launch by the California-based firm’s LauncherOne model rocket, which is launched from the 747 nicknamed ‘Cosmic Girl’.

The retired jumbo jet will take off with the rocket strapped to it’s belly, before detatching it at 35,000ft and getting out of the way of the much faster rocket at is enters orbit.

Virgin Orbit has already carried out four successful launches from the Mojave Desert, California, since it’s first failed launch attempt in May 2020.

The launch is part of a collaboration project between UK-based Satellite Applications Catapult, Space Forge, the University of Exeter and the UK Ministry of Defence.

The satellites, including the first ever built in Wales, Cornwall, Oman and Poland will all be deployed in low earth orbit – around 2,000km (1242 miles) or less.

Melissa Thorpe, head of Spaceport Cornwall, told the BBC that the rocket is the culmination of eight years of ‘really hard work’.

She said: ‘It’s been eight years of just really hard work – the blood, sweat and tears of the team – to get to this point.

‘And we’ve had so much happening just this past week.

‘Bam, bam, bam – back-to-back exciting moments, from satellites and the carrier plane arriving, to the ground support equipment and now the rocket. It’s hard to take it all in.’

The UK Space Agency commented: ‘The UK Space Agency and Cornwall Council are supporting Virgin Orbit to launch satellites from Spaceport Cornwall, starting this summer, with the spaceport set to create 150 jobs in the local area.’

The RAF said: ‘Horizontal launches, provided by commercial space companies from airports around the world, offer flexibility in future space launches – for both Government and industry customers.’

The RAF and UK Space Command say they are using this project to enhance ‘understanding of the use of small satellites, and responsive, resilient space launches and operations.’