The Melbourne International Film Festival is a big deal for David Geoffrey Hall. "I moved to Melbourne from Perth in 2012 and I've been to an opening or closing night every year since," the 31-year-old marketing executive says. "It's a great way to get out of the house in the middle of a deep and dark Melbourne winter."

Not this year, though. For the first time in its 68-year history, MIFF will not be a real-world physical event, but rather an online-only virtual event, as with many other similarly reconstituted and reimagined festivals around the world. But it will still aim to deliver a genuine festival experience, with close to 70 feature films and documentaries, plus 44 short films, including a dozen world premieres, on the line-up. 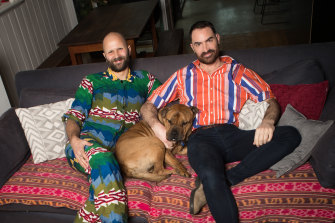 David Geoffrey Hall and Charles Purcell will be enjoying the opening night of MIFF at home with Wyatt the dog.Credit:Jason South

Even if it is an at-home on-your-TV-or-computer experience this year, MIFF still offers a point of difference from your regular streaming experience, says Mr Hall. "What I love is that it gives you the chance to see something that isn't going to come up on your Netflix or Stan feed," he says.

Mr Hall will work his way through a 10-film mini-pass at home in Brunswick with his partner Charles Purcell, an actor, and their dog Wyatt. They plan to dress up to watch the opening-night film First Cow from 7pm on Thursday, and to make an event of it. "We'll order in dinner from a local restaurant that's doing it tough, and we'll pop the cork on some champagne too."

Ordinarily, MIFF is a massively social experience for the pair. "As soon as the program is announced, there's a bunch of us jump online and buy tickets for opening night," says Mr Hall. "There'd usually be at least 10 or 15 of us."

This year, with everyone confined to their homes by the stage 4 lockdown, the socialising will be strictly confined to secondary screens.

"We have a What's App group going, so we'll be on there while watching."

But surely, as avid cinema buffs, you don't want people talking during the movie? "That's where the mute function comes in. But there'll be lots of facial expressions."

Officially, this is an in-between festival, billed as MIFF 68 ½ – partway between last year's 68th and what would have been this year's 69th iterations of Australia's oldest film festival. Getting it up and running in a short space of time as an online event has presented enormous challenges. 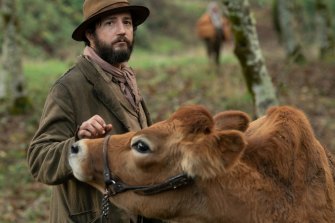 Digital distribution rights are complex and normally exist well outside the purview of festival programmers. Some titles will be screened with scrambling technology that makes it impossible for anyone so inclined to capture the image. And as MIFF's decision last week to drop the controversial Austrian film The Trouble With Being Born illustrated, the simple fact of the films being screened online puts at least some of them into a very different context than would be the case in a cinema.

The move to a stricter lockdown has also played havoc, with some events – including the Melbourne Symphony Orchestra performance to accompany the Icelandic film First and Last Men – cancelled.

Mr Hall, who will focus on the documentaries ("it always helps to pick an area and focus on that, otherwise the program can be too intimidating," he suggests), will miss the dancing at the opening and closing night parties this year. But he believes there’s a possibility the adaptation necessitated by circumstance might have a lasting upside.

"There's a real chance all these changes will make it a lot easier for people with disabilities, or who live remotely, to engage with the festival in a way they couldn't have otherwise," he says. "That surely has to be a good thing."

The Melbourne International Film Festival runs August 6-23. Details and bookings: miff.com.au. The Age is a festival media partner.
Follow the author on Facebook at karlquinnjournalist and on Twitter @karlkwin