‘Prince George is a mini-James Middleton’: Fans go wild over VERY similar resemblance between birthday boy and his uncle in childhood snaps

Royals enthusiasts have been sent into a frenzy over Prince George’s new birthday portraits, with many pointing out the likeness to his uncle James Middleton.

And admirers were quick to comment on how similar the young prince looked to James, now 33, with his beaming smile and blonde locks.

One fan, who shared an image of the entrepreneur captured as a page boy in 1991, aged four, alongside the newly released portraits of the eldest Cambridge sibling, said: ‘Prince George and Uncle James look so similar!’ 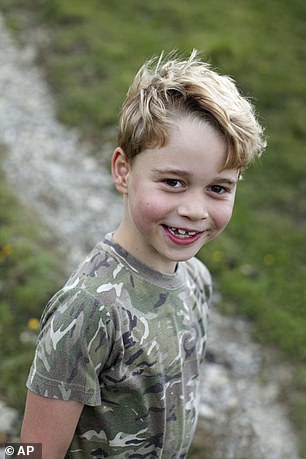 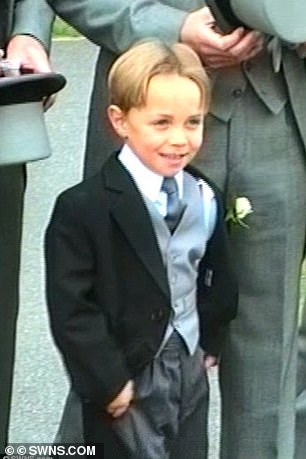 Royals enthusiasts have been sent into a frenzy over Prince George’s new birthday portraits, pictured left, with many pointing out the likeness to his uncle James Middleton (pictured right, aged four), as a child

Admirers, above, were quick to comment on how similar the young prince looked to James, now 33, with his beaming smile and blonde locks

Another added: ‘Prince George really is all Middleton! He has his mother’s face and is beginning to look a lot like his uncle James Middleton!

‘I really don’t get how so many people think he looks like his father Prince William because he never has to me!’

A third fan wrote: ‘Prince George is a mini-James Middleton! Even the shape of their faces is same!’

‘Prince George looking more and more like his grandfather Michael and his uncle James,’ a fourth person said on Twitter, as some fans pointed out George’s likeness to other members of the Middleton family.

The new portraits were, as usual, taken by keen amateur snapper Kate earlier this month at Anmer Hall, the family’s Norfolk home on the Queen’s Sandringham estate, where George and his siblings, Princess Charlotte, five, and two-year-old Prince Louis, have spent lockdown.

Reaction: Royal fans go wild over Prince George’s resemblance to both his uncle James and his grandfather Michael Middleton 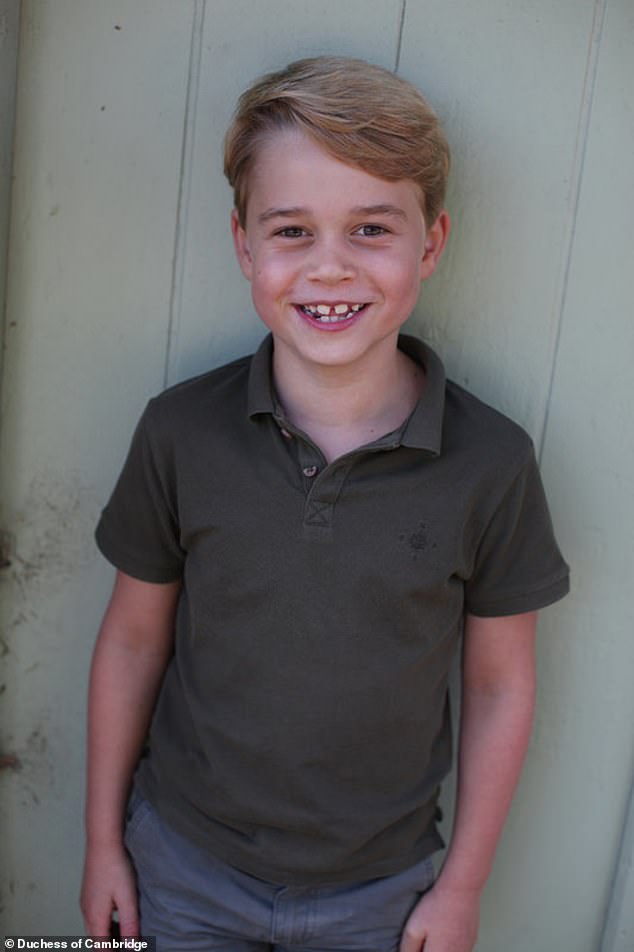 In a second image shared by Kensington Palace, the heir-to-the-throne can be seen beaming at his mother the Duchess of Cambridge, who is behind the camera

The pictures show a boy who is growing up fast and has left behind the frilled Peter Pan-collar shirts that his mother, the Duchess of Cambridge, so loved to dress him in as a toddler and beyond.

Instead we see a little boy, tousled blond hair swept aside and grinning, wearing a camouflage green T-shirt.

An appropriate choice given he will one day inherit his great-grandmother’s mantle as Head of the Armed Forces.

George is already said to be obsessed with helicopters like his father. In another picture he is wearing a favourite olive green polo shirt and shorts. 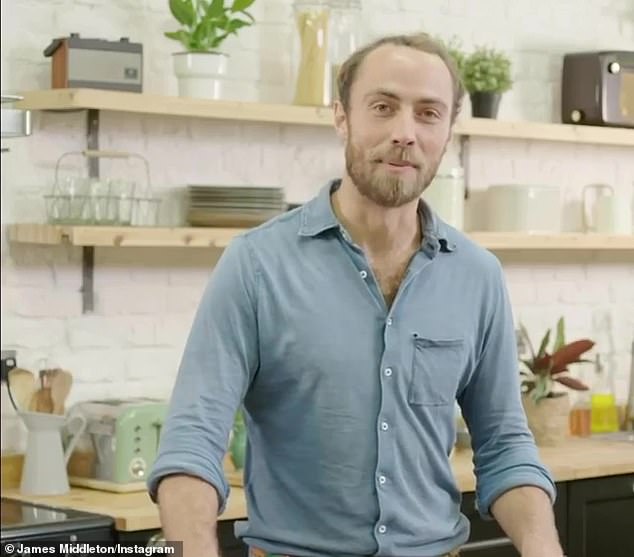 Like his uncle James, he is a sporty, outdoors type and his grandfather, Prince Charles, is said to be particularly proud that his eldest grandson has inherited his love of the countryside.

Kate and William are planning a 7th birthday party for George at home today with family and friends within their ‘family bubble.’

A Kensington Palace spokesman said: ‘The Duke and Duchess of Cambridge are delighted to share two new photographs of Prince George ahead of his seventh birthday tomorrow. The photographs were taken earlier this month by The Duchess.’

He made his public debut in front of the world’s media on the hospital steps one day later, wrapped in a white merino wool shawl, cradled in his proud parents’ arms.

A great-grandchild to the Queen, he will be the 43rd monarch since William the Conqueror obtained the crown of England if, as expected, he follows the reigns of his grandfather, the Prince of Wales, and then his father, William.