Home » Lifestyle » Faced with destruction of the reef, a small band do ‘coral carpentry’

Faced with destruction of the reef, a small band do ‘coral carpentry’

When you listen underwater the process of replanting a coral reef sounds disconcertingly like carpentry.

Christine Roper, a doctoral candidate from Canada who works with the University of Technology of Sydney, grips a piece of live “donor coral” and a wire clip in one hand and a claw hammer in the other. 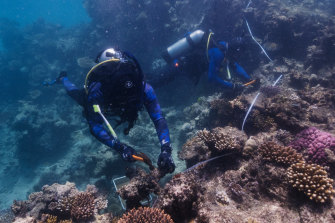 She’s three or four metres down, hovering about a section of what is known as the Opal reef, about an hour or so off the coast of Port Douglas in far north Queensland if you travel on a fast tourist boat.

She braces the living coral fragment against a section of dead reef, carefully positions a stainless steel clip attached to a nail over it, and then delicately bangs it in.

The tap, tap, tap resonates crisply through the warm winter water. It is louder than the scraping of the parrot fish gnawing away at living reef nearby, louder even than the breath in your ears.

Once attached the living coral continues to grow. Its hard exoskeleton creeps over the clip and in the right circumstances continues to thrive.

A few metres away John Edmondson, owner of the dive tour company Wavelength, is at work on another piece of reef, and beyond him his wife, Jenny. Tap, tap, tap. Tap, tap, tap.

They’ve been at this work now for three years, explains Mr Edmondson, a marine biologist by training, aquaculturist by trade, who in the early 1990s moved from his home in England to take over a dive tourism company in Queensland.

He invented the clips the divers are using to plant the new corals. The device is now in use on reef restoration projects around the world.

Since his arrival in Australia half of the Great Barrier Reef, a dazzling mesh of interdependent life that extends over 2000 kilometres from Gladstone in the south to the tip of Cape York and on into Papua New Guinea, has been killed by human induced global warming.

To get a sense of the scale of the carnage it helps to think of a swath of life the size of Italy, obliterated. It helps to remind yourself that the loss is animal rather than vegetable. The death is patchworked rather than uniform across the sea floor, and is worse in shallow warmer reaches. 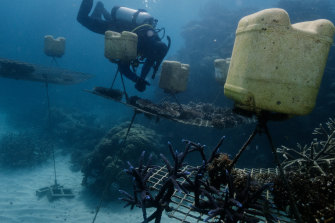 Coral nurseries on steel frames are used to grow donor corals which are broken off and implanted in existing reefs to promote wider growth.Credit:James Brickwood

More bleaching events are expected and the damage is accelerating. The worst hit areas now resemble concrete airport aprons from above.

The so-called Coral Nurture project that Roper and the Edmondsons are engaged in has so far “planted” 38,000 corals in a handful of sections of reef. Something akin to market gardening in the Amazon.

The program was first funded by the Queensland government and is now supported by the Great Barrier Reef Foundation and a handful of tour operators like Edmondson.

The tour operators not only provide the expensive practical resources of boats and fuel to bring researchers to the reef, but also the blunt carpentry. Between dives with tourists they can be found underwater replanting the coral gardens. Tap, tap, tap.

A few metres from many of the gardening sites you can find coral nurseries on steel mesh frames, anchored where the water movement and absence of predators promotes rapid coral growth.

This is where many of the “donors” are drawn from.

Branch coral, which grows in long delicate arms, is best suited to the process. No one suggests that coral gardening can preserve the biodiversity of the reef, though it may help researchers come to understand which corals will better survive the coming heat.

Roper and Edmondson say the sites of their replanting are clearly benefiting from the work and from a tourist’s point of view the reefs they have concentrated upon seem rich with life. 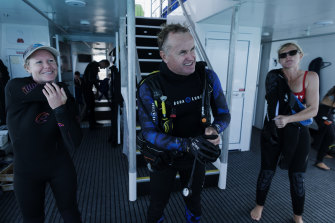 Ready to do some carpentry: Christine Roper, John Edmondson and Jenny Edmondson.Credit:James Brickwood

But Australia’s foremost reef scientist Professor Terry Hughes, of the Australian Research Council Centre of Excellence for Coral Reef Studies, has dismissed what he calls “clever science” to address the terrible problems facing the reef.

“The first time we saw back-to-back events on the Great Barrier Reef was the bleaching in 2016 and 2017,” Professor Hughes told The Sydney Morning Herald and The Age earlier this year. “Now it’s predicted that back-to-back bleaching could occur every year by mid-century.”

Professor Hughes describes “coral gardening” efforts as a distraction from the real work needed to save the reef.

“The story that clever science can fix it has no credibility. These projects are feasible, but only at a very small scale at great expense. We need to address the root cause, which is climate change,” he says.

In April an Australian Academy of Sciences report said that if the world warmed by 2 degrees just 1 per cent of the world’s corals would survive. The earth has already warmed by 1.1 degrees and medium-range estimates forecast 1.5 degrees of warming by 2045 to 2050.

Anna Marsden, director of the Great Barrier Reef Foundation, says she largely agrees with Professor Hughes, as does Ms Roper.

In their view the only hope for the reef is an abrupt global effort to end carbon emissions and arrest global warming.

Ms Roper says though that even if that was to happen, the amount of warming already locked into the earth’s climate system will see temperatures rise further.

The project seeks to sustain sections of the reef and identify corals that might survive in a warming environment.

“I felt helpless when I learnt about this. That’s why I started this work,” she says of global warming. “I didn’t want to feel helpless anymore.”